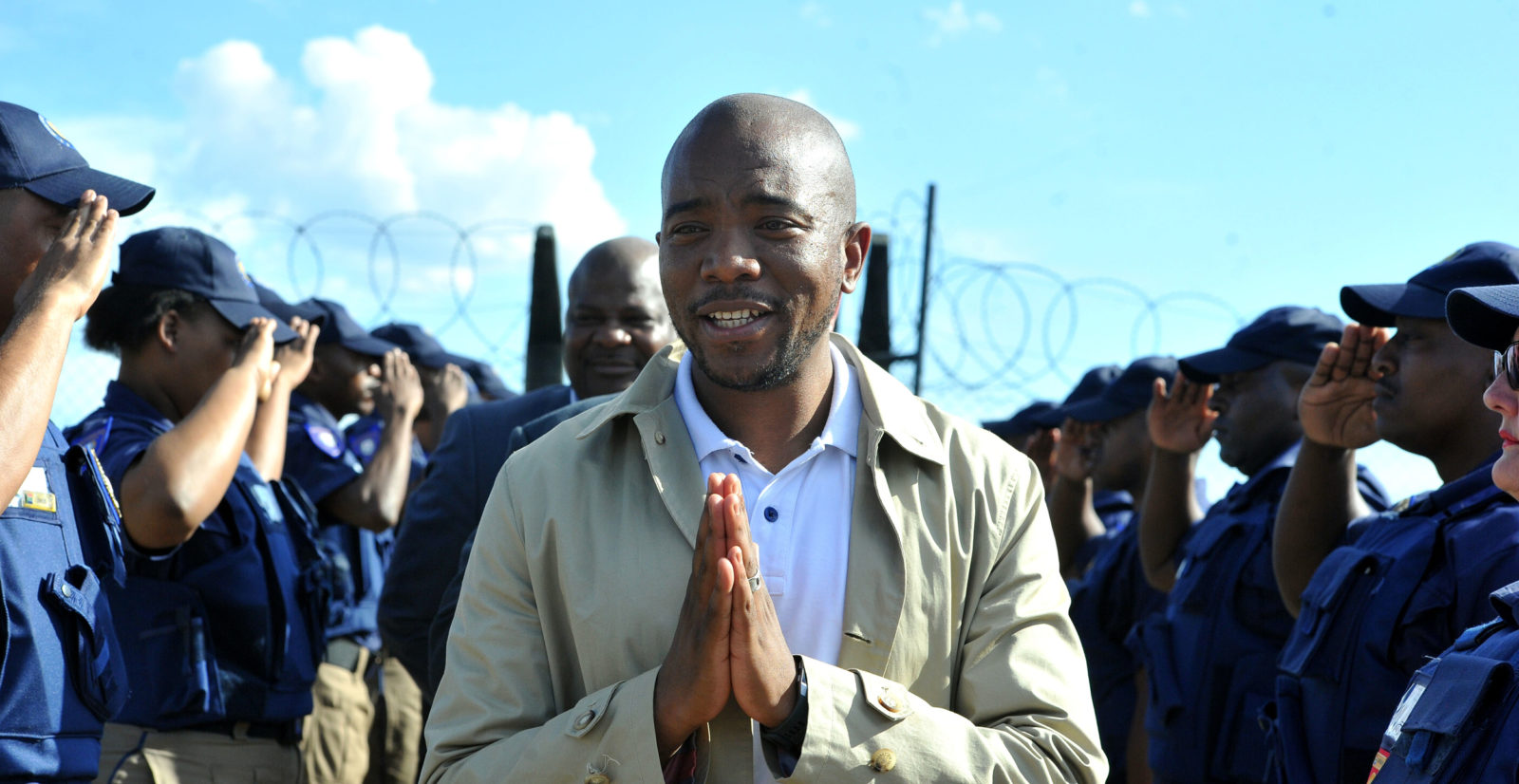 DA leader Mmusi Maimane’s seemingly last-minute decision to enter the race for the Western Cape premiership places the party in a difficult situation ahead of the announcement of the successful candidate for the position. Amid a confused and largely negative response from pundits and social media, the DA could prevail upon Maimane not to stand – an about-turn which would paint the party leader as weak and indecisive. But if Maimane does indeed take up the role, the messages it sends to the electorate about the party also do not inspire confidence.

When the DA cancels a press conference, it almost always means something’s up. In this regard, the DA is a victim of its own efficiency. While a postponed briefing from another political party might be met with shrugs, from the DA it causes raised eyebrows and prompts journalists’ questions.

The DA’s decision to postpone a Sunday press conference at which its candidate for the Western Cape premiership was supposed to be announced thus immediately invited speculation that something was amiss behind the scenes.

The party has been rolling out its other premier candidates to the media, province by province, with no apparent glitches. What was going on in the Western Cape?

The Sunday papers had the answer: the party was tussling over DA leader Mmusi Maimane’s reportedly “eleventh-hour” decision to make himself available for the role of Western Cape Premier. This news was confirmed by the DA, and the DA’s Western Cape leader Bonginkosi Madikizela has subsequently taken his fight for the premier spot to the media by giving interviews in which he has openly expressed his unhappiness with this turn of events.

First, the nuts and bolts. Maimane, as DA leader, is effectively entitled to pick for himself any position within the DA’s grasp. If Maimane decided he wanted to follow Patricia de Lille as Mayor of Cape Town, he could take up that role.

The rule allowing him to do so is found not in the DA’s constitution, as has wrongly been reported, but in the party’s Regulations for the Nominations of Candidates.

“The national leader of the Party will ex officio be entitled to occupy the first position on the national or regional list to the National Assembly for the provincial list for any province, or to be the premiership or mayoral candidate in any province or municipality, if he or she wishes to assume this position.”

If Maimane were to be the DA’s pick for Western Cape Premier, this would not prevent him from also being the party’s national candidate for president.

“A candidate can appear on more than one list,” Selfe told Daily Maverick.

As Western Cape Premier, Maimane would still be DA leader – but he would have to give up his current role as DA parliamentary leader. This is because he can only be elected to one legislature, and as premier his presence would be required in the provincial legislature rather than the National Assembly.

For Maimane to become Western Cape Premier, in other words, would be entirely permissible and above-board in terms of the party’s regulations. There is also an obvious precedent for this leadership situation, in the form of Maimane’s predecessor Helen Zille.

But as many have pointed out, the context in which Zille served as provincial premier while DA leader was very different to that faced by the DA today. Zille’s deployment to the Western Cape legislature was a canny move aimed at consolidating the DA’s power in a province they had only recently won control of. In 2009, the year in which Zille became Premier, the DA won the Western Cape with a tight 51.23% of the vote.

Today, the Western Cape is widely seen as the DA’s only “safe” province, even allowing for the potential damage wrought by Cape Town’s water crisis, the Patricia de Lille saga and mayoral upsets in other municipalities. If the DA were to lose the governance of the Western Cape in the 2019 elections, it would be one of the greatest political shocks in recent South African history.

But does the DA have reason to believe that its grip on the province is less secure than it appears to be on the outside?

“The assumption that the Western Cape is ‘in the bag’ is incorrect. We have to work just as hard as in other provinces to win votes. Nothing is a given in an election, otherwise it breeds complacency & leaves room for the opposition to creep in & steal votes.”

When an Ipsos poll in July suggested that the ANC and the DA were headed for a close battle at the Western Cape polls, with just a 2% difference in favour of the DA, the party rubbished the results. Instead, the DA revealed to journalists that its internal polling from the same time showed that the DA would win the province by 52% of the vote to the ANC’s 33%: a drop of 7% from 2014’s elections, but enough to govern without a coalition.

The DA is known to do the most sophisticated polling of any South African political party, so the July figures should have given them some comfort. But the potential deployment of Maimane as the Western Cape Premier candidate may suggest a level of anxiety over the 2019 results that has previously been kept hidden from the public.

Maimane is almost certainly the second best-known leader in the DA nationally, after Helen Zille, and is reportedly particularly popular within the Western Cape. There’s every reason to believe that a potential Maimane premiership could help win the DA votes in the Western Cape – but the question is why the party would consider his deployment there to be the best use of the Maimane weapon.

That question presupposes that there are other DA leaders who support the idea of Maimane as Western Cape Premier, and that there is a rationale behind it which supports the wider interests of the party.

The alternative is that Maimane is keen on this deployment for more personal reasons – because he wants to swap Parliament for a fresh challenge, or because he wants to build his experience in hands-on governance to give his political future more security.

In reality, however, swapping the role of DA parliamentary leader for Western Cape Premier may be career-limiting in other ways. It is a rare occasion on which a national media outlet will cover events in the Western Cape legislature, where Maimane will be found holding forth, so his profile will undoubtedly suffer. The reality is that as premier, Maimane will be a lot less visible on the national stage than whoever replaces him as parliamentary leader in the National Assembly.

But let’s say that the DA has a rock-solid reason to believe that Maimane needs to be deployed to the Western Cape: new poll figures showing that the ANC has a credible chance of winning the province, for instance, or a long-term strategy which sees the DA focusing on its existing strongholds and biding its time for a more plausible bid at national power.

Even if that is the case, the message being sent through a Maimane premiership is that the existing Western Cape candidates for the position cannot be trusted to get the job done as effectively as Maimane – despite the fact that Maimane, unlike the frontrunner candidates of Alan Winde and Bonginkosi Madikizela, has never served as a provincial MEC.

The vocal resentment of Madikizela at the prospect of Maimane being parachuted in is understandable: Madikizela did not run for Cape Town mayor in order to focus on his premiership bid, and now may find himself in the slightly odd position of being the party’s provincial leader without holding any governance role in the city or province.

It has been reported that in the party’s internal selection process, Winde scored highest.

The process, Selfe told Daily Maverick, consists of a written assignment, a presentation by the candidates on their vision for the province, a question session and a performance assessment as a public representative.

However, noted Selfe, “The selection panel is able to recommend adjustments to the ordering of the candidates’ scores for ‘compelling reasons’.”

Reports have suggested that the DA leadership is reluctant to appoint another white Premier, though DA head of policy Gwen Ngwenya strongly criticised this idea on Twitter, writing:

“Actual DA members said neither Winde or Maynier would be acceptable due to their race? Never mind the calibre of both men then. Honestly nauseating that I am in a party with such individuals. All I can say is that this kind of backward thinking doesn’t represent all of us.”

If the perceived need to appoint a strong black premier in the province is informing the potential Maimane deployment, it points to a failure on the part of the DA to build up a team of capable leaders of colour in the Western Cape in particular. If Maimane is seen as the only available DA leader of colour fit for the role, that suggests an alarming shallowness of talent within the party’s provincial ranks.

There is a further possibility, which is that the deployment of Maimane to lead the Western Cape government is seen as a way to neutralise the factionalism that has dogged the province and the City for some years. The same could be said for the man who looks likely to become the next mayor of Cape Town: current DA Gauteng regional chairperson Heinrich Volmink.

Jetting in two outsiders to deal with an undeniably fraught political context may also backfire, however – causing resentment among the overlooked candidates while muttering grows as to why Capetonians cannot fulfil these roles. Though Volmink is originally from Cape Town, he has been immersed in Gauteng politics for some years, while there have already been concerns expressed as to whether Maimane will be sufficiently attuned to Cape Town’s fairly unique context.

As former DA strategist Gareth van Onselen pointed out on Twitter, moreover, the vacancy in the position of DA parliamentary leader which would result from Maimane’s National Assembly exit could also cause a bruising internal battle, doing the cause of party unity no favours.

Maimane has always come across as a diplomatic and sensitive politician, so it seems unlikely that he would be suddenly blind to these issues. Indeed, City Press reported that the DA leader was “somewhat conflicted” over the wisdom of the premier move – again raising the question of who, within DA ranks, is pushing for this and on what grounds.

For as long as the DA fails to clarify what’s happening, the sense of a party in the throes of confusion will brew. That alone is unlikely to be appetising for voters yearning for decisive leadership and ideological certainty come 2019. DM

Revealed: The UK’s largest intelligence agency is a significant emitter of greenhouse gases

Bullying and Disability: How many more kids have to suffer? (Video)