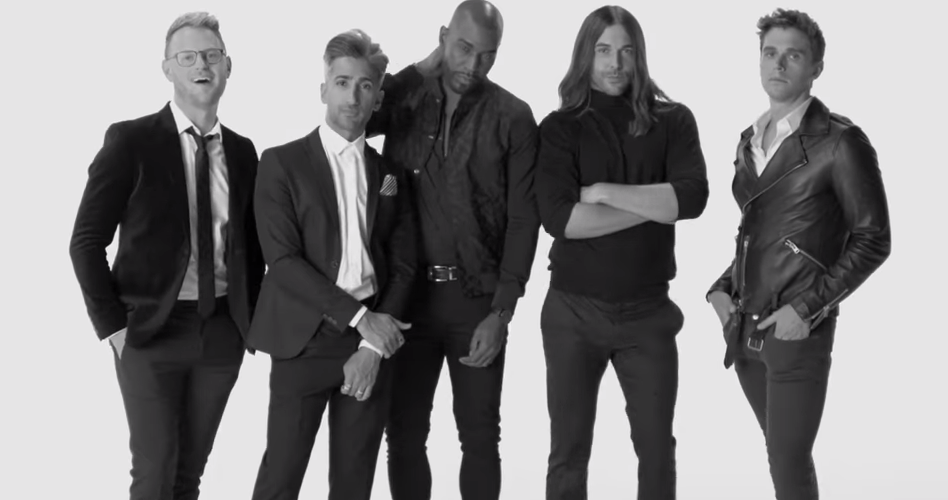 You’d think Queer Eye was just a belated sequel to the original Queer Eye for the Straight Guy. But the new incarnation has a spirit, style — and not least, a heart — all of its own. If you’ve overlooked its two seasons on Netflix, turn back now and start watching. It’s a pink-tinged tonic.

I had passed Queer Eye by through many a Netflix browse, thinking, well, that’s like soooooo 2005, it must be stale. I mean, how many more straight guys could there be left on whom to bestow the queer-eye makeover? Oh right, The Don’s horrid sons, maybe. But who would want to watch that? And as for Dad, that orange hair hasto go, darling.

But my son-in-law Neal put me right, so I dipped in and was swallowed up by it instantly, because the series is an utter delight right the way through its first two seasons (both out in 2018). No surprise then that it was all over the Creative Arts  Emmys on 9 September and is up for Prime Time Emmys too. They’re happening on Monday (17 September) and I sure as hell will be rooting for the guys.

They’re five new queer-eyed dudes, not the original line-up a decade or more older, and they have been very expertly picked for their bright, super-confident personalities and winning ways. Each of the five boys (and they call themselves boys) has a great sense of humour, but, most of all, these guys have heart. And Neal knows by now what a big softy I am and how easily I am taken by a story that rips the emotions to shreds. These dudes do a lot of that.

They’re called The Fab Five — a nod, for those younger than some of us, to the heyday of the Beatles in the Sixties, when the Liverpool lads were the Fab Four — and each has a particular speciality as they are assigned, in each episode, what to them is a mystery candidate for their makeover magic. They don’t know who it will be, and get to read a card while en route, explaining who the subject (or, some might say, victim) will be. Unlike with the original series, the subject may not necessarily be a man. Nor necessarily straight. Nor even of particularly determinable sexuality. Hence simply Queer Eye, unlike the original Queer Eye for the Straight Guy.

To a man, the Fab Five are likely to lift even the dullest, drabbest spirit.

Watch the official trailer for the first season:

Tan France, a Brit with a posh North Country accent — as if he was plucked out of Yorkshire and forced to speak proper in London — is the fashion guru. Tan (real name Tanweer Wasim Safdar, changed at some point to France), is a fashion designer of Pakistani origin, and worked at Zara, Selfridges and Shade Clothing before launching his own clothing line, Kingdom & State, and is a partner in Rachel Parcell. He has a memoir coming out in 2019.

Tan’s on-camera persona is delightful, which can be said of all five of the boys. He’s an imp, a Puck in a posh suit, topped by a grey-black swish of hair, and when he talks fashion you know he knows what he’s talking about. You would trust him to dress you for a Big Night Out, or just for a braai with your mates. Who would then check you out skeef like.

It’s the sort of line-up where people take to choosing their favourite. Mine is Karamo Brown, who, it turns out, is a psychotherapist and social worker. Once you’ve seen how Karamo engages with the individuals that the boys make over, this makes total sense. It’s clear he cares genuinely about the next man, has tremendous empathy, Trumpian bucketloads of it. Tremendously. It’s also clear that, like most empathetic humans, he (and the other dudes) do not like Orange Man, or his politics.

Karamo — whose television debut was The Real World: Philadelphia in 2004 — is the culture expert of the Fab Five. A handsome dude with effortless charm, he is 37 and has been openly gay since he was 15. He’s been a key activist against the gun lobby since his old alma mater, Marjory Stoneman Douglas High in Parkland, Florida, was the target of a vicious shooting attack on Valentine’s Day 2018, which birthed the Never Again MSD students’ movement.

Bobby Berk, also 37, is a brilliant interior designer with his own furniture and home accessories line. Texas-born, he opens up in Queer Eye about not being accepted and welcomed by the church community he grew up in. He comes over as sad about this, rather than bitter, quietly accepting the way things are, yet his openness about it on-camera must surely be a touchstone for other gay kids in similar circumstances. This applies to all of the boys; each is a beacon for young gay people to follow and look up to. They deserve to be so proud of their roles in this. Every kid in that position should insist that their parents and, for that matter, church elders watch this series.

So, while Karamo is looking at the cultural and private life of the episode’s subject, and Tan is improving (you might say correcting) their wardrobe, Bobby is making over their home, or another space of their choice.

Which brings us to their hair. Enter, (screaming and mincing) from stage left, Jonathan Van Ness, the gayest gay dude in all Gaydom. Jonathan was, before Queer Eye, better known as the hands-waving, chatterbox hairdresser in the Funny Or Die web series Gay of Thrones, in which he encapsulates each episode of Game of Thrones— through all of its seasons — in frenetic chatter to a somewhat bemused customer whose hair he is doing. This won him a Prime Time Emmy.

Here’s a Gay of Thrones clip:

Jonathan, the youngest at 31, is (no prizes here) the grooming expert and hair stylist on the show, and the one most likely to raise the hairs on a homophobic bigot’s neck (unless the bigot’s also a white supremacist, in which case it might be Jamaican-born Karamo). Jonathan was the first male cheerleader at his Illinois high school — I can picture him doing that — where he was so badly persecuted that he received a series of death threats. He’s a naturally funny guy, and says his humour is a coping mechanism. Again, a brilliant touchstone for the many young people similarly bullied.

Finally, the elegant Polish-Canadian Antoni Porowski, with his model looks and metrosexual demeanour, who is the food and wine guy of the Fab Five. He’s worked as a model, actor and — key here — chef, and his psychology degree explains the Karamo-like empathy he shows to each episode’s subject. He’s acted in a few movies (Daddy’s Boy, and James Franco’s new film The Pretenders) and an episode of Blacklist. All of that, plus a cookbook deal and the restaurant he is working on opening in New York City, suggests that Porowski might be the first of the Fab Five to use Queer Eye as a springboard to greater things.

Watch the official trailer for the second season:

Boy do these guys tug at the heartstrings. You’ll want to have some Kleenex to hand when they makeover a transgender client. Such great television, and how brave is the young man (as he chooses to be) to be the subject of an episode watched by millions? I also loved the episode in which the Fab Five and the hip mayor of a multicultural town demonstrate quite how and why embracing other cultures and races is so much better than, you know, the Donald thing (the episode is titled, delightfully, Make Ted Great Again.) Vulture says: “With the debut of Queer Eye season two, Tinder profiles all over the country have surely been upgraded from “Netflix and chill” to “Queer Eye and cry.”You’d better believe it. You Can’t Fix Ugly is another great episode that will raise your Kleenex budget, but hey, there isn’t a dud in the two seasons.

Again and again, just by being themselves, and through their kindness and empathy, we see the guys showing very obviously conservative people that they — and LGBTQI people generally — deserve to be recognised and loved just for who they are. They’re a five-man-strong antidote to bigotry.

They’ve even said they’d like to do an international show. If ever they do, somebody please nominate me. My hair’s a mess, my wardrobe sucks. And I’d get to hang out with the Fabbest Five in television. DM