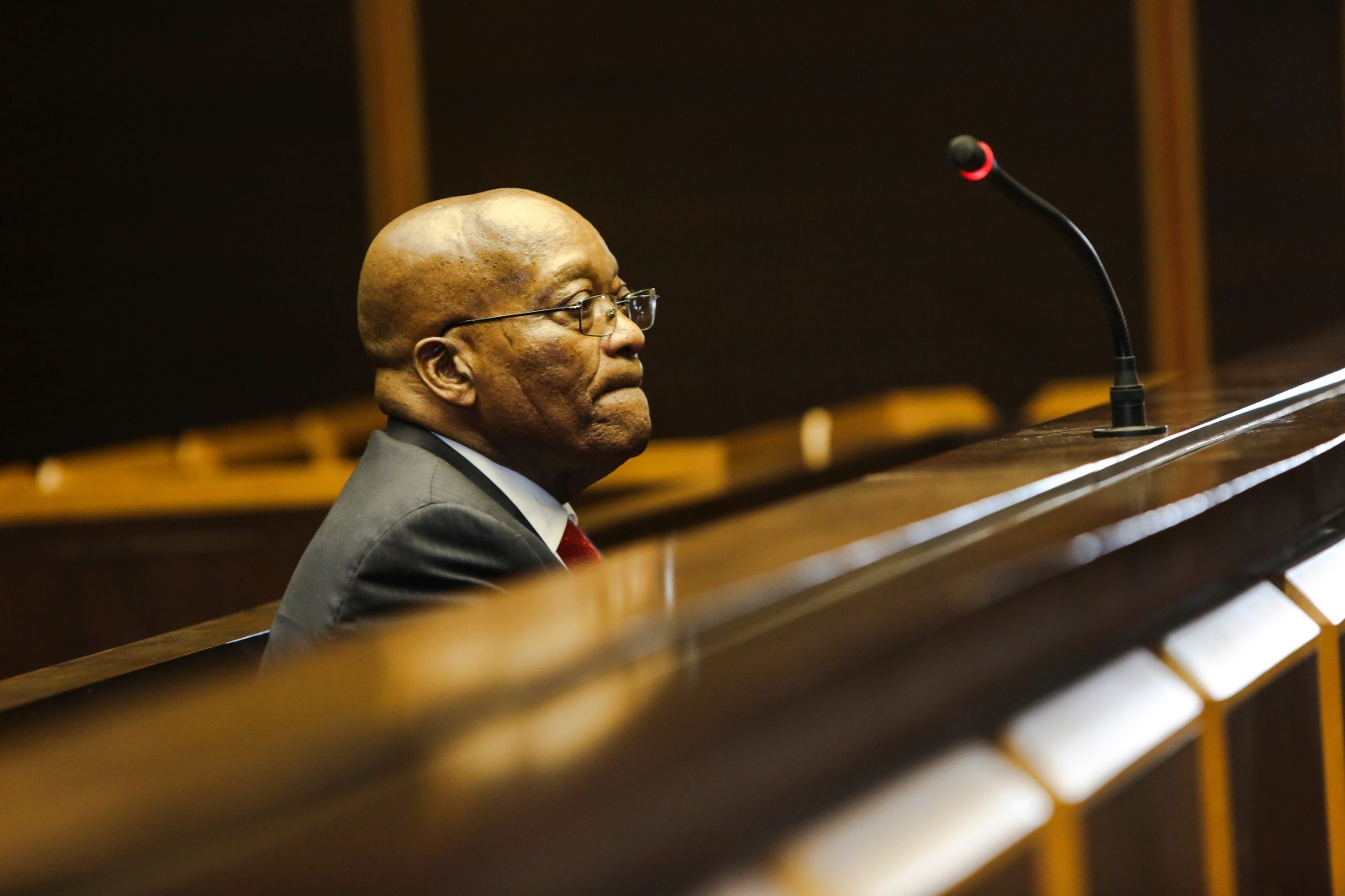 The last week or so has been dominated by political talk around a newly active former President Jacob Zuma. To many it was apparent that he was getting restless and preparing for a comeback of sorts. To others, he was just out to get and politically damage President Cyril Ramaphosa. While some of the politics around this can be fairly murky, surely there are definite limitations to what is possible for Zuma to achieve. It is also important to determine the real motivation for his actions, and to work out what he, and those around him, are hoping to accomplish. Still, surely the biggest check on any success he may have lies with the electorate, and its feelings towards him.

The first part of this political week was dominated by the fallout from the publication by the Sunday Times of a photograph showing former president Jacob Zuma meeting with ANC Secretary-General Ace Magashule, former North West Premier Supra Mahumapelo and ANC Women’s League Secretary-General Meokgo Matuba.

First came the wild and improbable claim of Trumpian proportions: there was no meeting, move along, nothing to see here. Then an equally persuasive claim that it was an almost accidental meeting. And finally, the confirmation from Magashule, in what must have been an uncomfortable set of interviews, that he did in fact meet with Zuma about confidential “organisational issues”.

Crucially, in one of the interviews, Magashule confirmed that the national officials, the rest of the ANC’s Top Six, were not aware of the meeting before it happened. This could be important because it reveals that Magashule was not meeting Zuma with the blessing of the top leadership. In the current political environment, that is an unpleasant spot to find oneself in.

Then, on Wednesday, Zuma went to the Walter Sisulu University in Mthatha in the Eastern Cape. There he said that the phrase “State Capture” only applied when all three arms of the state (the executive, judiciary and Parliament) were captured, and told students to “think” about what was happening.

In short, it was the usual Zuma refrain of the song sung by his supporters, Wenzeni uZuma, or “What has Zuma done”. Along the way, he also suggested that land, the banks, and the mines should be nationalised. Those with longer memories may well remember how Julius Malema, then the leader of the ANC Youth League, fought a huge battle to nationalise mines against Zuma during the period leading up to 2010. His bid was effectively killed in the ANC policy conference of 2012, by Zuma and his people. In other words, when he was in power, Zuma was happy to fight mine nationalisation. (Hypocrisy, anyone?)

Also, Zuma’s claim that land should be nationalised appears to put him much closer to Malema’s views on land than the ANC’s. Malema says the state should control all of the land in the country. The ANC, in the motion it eventually passed in Parliament, made it clear that citizens would hold tenure in their own right. This will aggravate further suspicions that Malema and Zuma may not be as far apart as is sometimes thought (the Economic Freedom Fighters recently appeared to support suspended SARS Commissioner Tom Moyane, and has taken aim at Public Enterprises Minister Pravin Gordhan).

Taken together, recent moves point to the fact that Zuma is mobilising. The question is, to what end? Is this a bid to somehow regain control of the ANC and thus state power? Or it is merely an attempt to save his own skin, and the others who are currently facing the prospect of judicial action over State Capture, however it is defined?

It is surely the case that once the Zondo Commission actually started, Zuma and those around him were going to be alerted to the damage it could cause. It appears that the commission is slowly beginning to make inroads into what had happened. At the very least, it is educating the public about it. When these proceedings are broadcast live across the country by the SABC, it is obvious that it will be hard to make a case that nothing untoward happened.

The commission is also beginning to show it has teeth. On Thursday morning, Donald Liphoko, who briefly became the government spokesperson at the expense of Phumla Williams, tweeted that he had received, at 07:12 that morning, a summons to appear at the commission. Later, the Deputy Chief Justice ruled that the Guptas cannot testify from Dubai, and then said it “was his wish” that Zuma himself respond to the claims already made against him. The commission might be reaching the point at which it becomes unstoppable.

This would always provoke a fightback from Zuma’s side. It may also strengthen the case that the latest moves are about damage limitation, rather than part of a desperate comeback bid.

It should also be remembered how unpopular Zuma is across the country. It was common wisdom for many years that Zuma was unpopular in urban areas but popular in rural ones. However, polling performed towards the end of his term of office (or was it a reign?) suggests that his personal approval figures had started to tank in rural areas too. And his figures took the ANC’s figures down with them, which is important. An ANC again led by Zuma, or Nkosazana Dlamini Zuma (or any other apparent successor), would battle to win an election. This means that it is surely impossible for anyone to move against Ramaphosa before that poll. And of course, after the poll, the risk could be that Ramaphosa is stronger than he is now.

It has by now became painfully obvious that Zuma is prepared to damage the ANC to protect himself. There is evidence for this, if you consider what Zuma did to the ANC during his term in office. He showed that he was prepared to drag its name through the mud of Nkandla, the Guptas and his own corruption charges, while still claiming the party was more important than the country. If this is the case, what then could he do to the ANC now? It would seem entirely plausible that Zuma is prepared to take the party down with him, while still professing his undying love for it.

It is also likely that he will garner large crowds wherever he goes. This is the kind of image that is likely to send a warning shot across the bow for those who believe he is gaining strength and power.

But it should also not be forgotten that as a former president, and as the defining political personality of the last 10 years, the gathering of such crowds is a foregone conclusion. In 2009, Thabo Mbeki, then out of office for nearly a year, gave a guest lecture at Wits University. It was one of his first public statements since leaving office. This reporter went to that lecture. The hall in which it was conducted was overflowing in every direction, and the spirit inside was immense. It was probably the most emotional crowd Mbeki ever addressed. He was in such a good mood that when this reporter asked for an interview, to his great surprise, it was granted. The point of this is that crowds around Zuma should be expected. They’re also relatively easy to arrange, which he has been a master of in the past.

Perhaps the most important question to ask around Zuma is this: Are there any signs that his popularity or support is growing, are there any people who now appear to support him who were not supporting him in the past? The answer to that is surely “no”. The people around him at the meeting were remnants of those who have supported him in the past. There was no person of significance who had moved over from Ramaphosa, or even from the middle ground, to Zuma. He is supported only by the people who supported him while he was in power. Some of them are linked to him through the claims of State Capture. This suggests then that he is not, as yet, making any real progress.

It is surely true that there are those unhappy with aspects of the current situation. Students who haven’t received NSFAS funding, for example. But imagine what would happen were Zuma to try to address a university in Gauteng, for example the University of Johannesburg. It seems unlikely that he would receive the kind of welcome he did in Mthatha. Certainly, the #FeesMustFall movement, as it was in 2016, was hostile to his government, and treated his pre-Nasrec move to make higher education almost free with deep suspicion.

After all the show and fire and fury of the last week, Zuma’s options remain quite limited. It is unlikely that people are going to move from the Ramaphosa side to him, or even from the middle ground to the man whose team lost at Nasrec. That does not mean he cannot cause damage to the ANC, or, perhaps, in some ways, to the country. And he may still have an interest in simply confusing or even destabilising situations. But he is still limited by the new position in which he finds himself. DM