Tree apocalypse looms in the face of policy paralysis 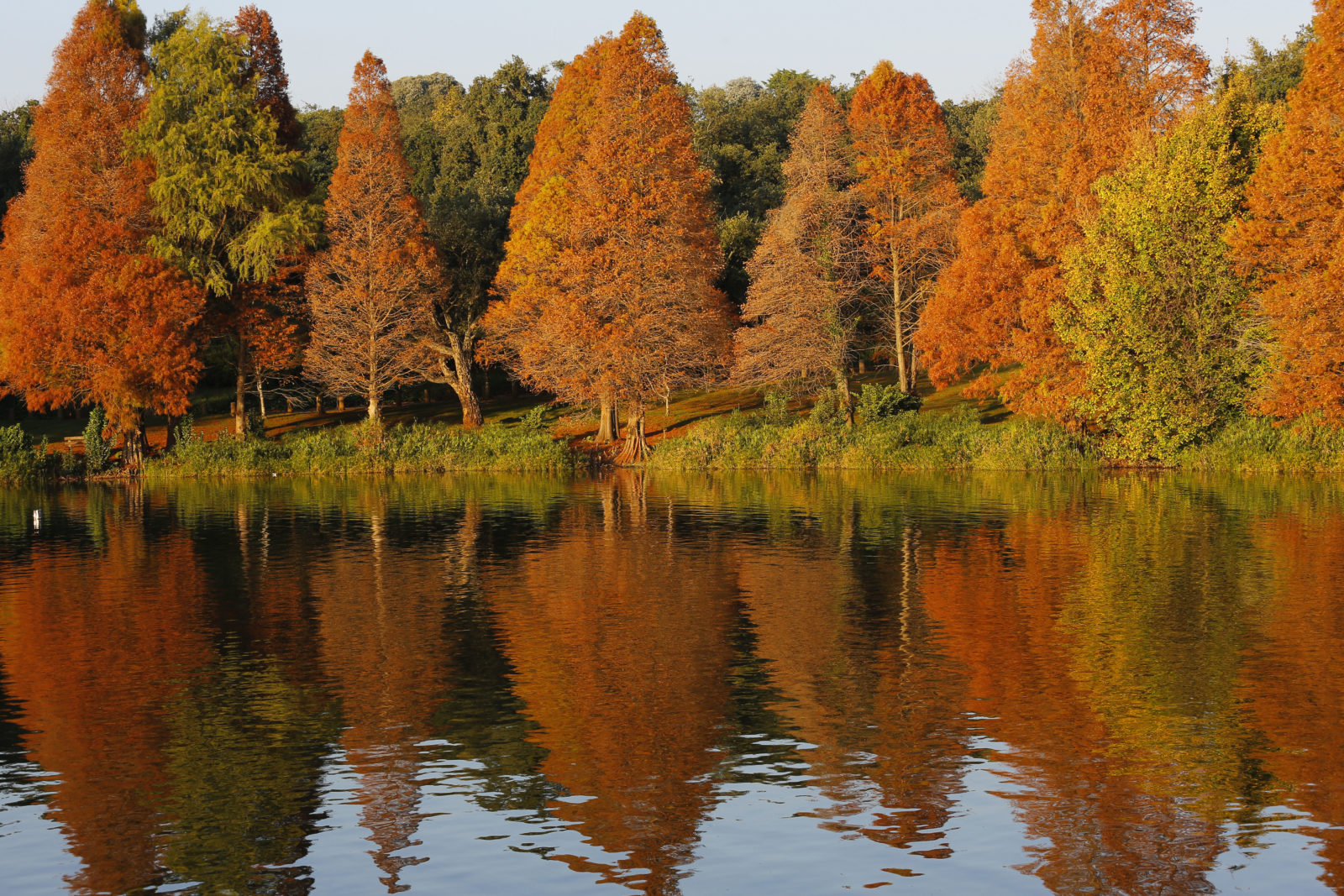 File photo: The brown leaves of autumn trees are reflected in the waters of the Emmarentia Dam, Johannesburg, South Africa, 03 May 2018. Photo: EPA-EFE/KIM LUDBROOK

You thought the corruption in SARS was bad? You should see what’s happening to our trees. A tiny beetle – the polyphagous shot hole borer (PSHB) – threatens to kills trees across the country, just like it decimated the old English oaks of Knysna. Not only the trees in your garden, and lining our streets, but in national parks and on farms. Too small to notice until it’s too late, this indiscriminating killer has already devastated green belts in California and avocado plantations in Israel. Despite learning lessons from these cases, national and regional stakeholders in South Africa are spinning in their efforts to respond to the crisis. We need clear policy and decisive action. The clock is ticking.

Since polyphagous shot hole borer (PSHB) was first reported to Johannesburg City Parks eight months ago, media have reported on the crisis, residents’ associations have initiated awareness campaigns and conducted practical workshops, and chemicals have been tested. In addition, the government has set up steering committees and consulted scientists. Yet the City of Johannesburg (CoJ) has put out only one press release, with no concrete action plan, procedure recommendation, or subsequent policy guideline.

Johannesburg City Parks and Zoo (JCPZ) are actively working on developing their internal response however they have missed the opportunity to establish a public awareness campaign in time for the spring panic that is about to ensue when the dead trees become visible.

Our living heritage is at risk. PSHB has now proliferated in Gauteng, KwaZulu-Natal and the Garden Route, with reports coming in daily from across the country that it is spreading. It’s now in our agricultural trees; it’s even in the Kruger National Park.

This is an environmental disaster, but it’s also a disaster for the environmental heritage of our future generations. In areas like Soweto where greening programmes have been under way, this effort could be lost.

Unlike most borer beetles which live in dead wood, the shot hole borer attacks living wood. The PSHB is indiscriminate in the trees it attacks since it does not eat wood, rather it eats fungus that it farms inside extensive tunnels that it creates inside the living tree. It’s actually the fungus that kills the trees.

For a number of years, PSHB existed unidentified in South Africa and we have already lost many trees. The beetle comes from Vietnam where trees exhibit natural resistance, and natural predators keep the beetle under control. However shipping pallets made of contaminated wood aided the PHSB’s global spread.

Two years ago PSHB killed the mature oak trees in Knysna. The municipality removed the dead trees, unaware of the nature of the problem, cutting the wood into large logs and invited residents to take them. As a result the PSHB was transported to gardens across the area and the emerging beetles infested many surrounding trees.

This human activity aided the natural process of expansion, whereby beetles will fly up to 2km and infest available trees. Cut wood that is transported increases the pace at which the beetles travel, putting trees at risk as the beetle is transported across cities and provinces.

The Soweto greenification programme, under way since 2010, has improved the natural environment as hundreds of thousands of trees have been planted – at great expense. Yet this area now suffers from severe infestation resulting from wood that has been transported to Soweto from Johannesburg, along with millions of emerging beetles. In this way, community open space, and efforts at improving well-being and health, as well as improved air quality are all put at risk due to PSHB.

Stakeholder action is a key factor in being prepared to respond to PSHB, but so far efforts have been limited. On 5 April 2018 a stakeholder meeting was held at JHB City Parks which resulted in a press release from the City of Johannesburg on 11th April 2018 , highlighting the problem with PSHB. Five months later we should at the very least have had received notification regarding dumping sites that have been established where infested wood can be destroyed.

George Municipality has taken proactive steps towards responding to the problem by issuing media releases and running poster campaigns during the course of this year. For example, formal press releases were made on 3 April 2018 and 30t May 2018 – the municipality’s proactive manner in creating awareness of the problem, and guiding residents on dealing with the problem needs to be commended.

FABI has played a central role within the country to identify PSHB and advise institutions on appropriate response. Professor Wilhelm de Beer, the foremost specialist on PSHB in SA, has just spent two months in California to get first-hand information on how to optimally address the crisis. Trudy Papp was the FABI field researcher who first identified PSHB in Pietermaritzburg. De Beer and Papp have been travelling around the country tirelessly investigating reports of the beetle. However, FABI is funded by industry, prompting that budget be principally directed towards forestry research activities. Until such time as PSHB seriously threatens the forestry industry FABI’s PSHB research and field work will be under resourced.

At the end of August, the Department of Agriculture, Forestry and Fisheries (DAFF) issues a media statement acknowledging the PSHB crisis. The DAFF “Plant health early warning” team have taken great initiative towards the PSHB problem during the year by establishing a steering committee to determine optimal strategies for responding to PSHB. Yet, such institutions inherently move slowly and faster action is needed at the national level to create public awareness and to inform action. Agricultural sector interest groups are closely following the crisis, however their direct action is not forthcoming since there are only a few instances of infestation in agricultural orchards.

Chemical companies track agricultural big business, and they are currently not motivated by the “small” requirements for treatment of ‘ornamental’ trees in the cities. Registration of chemical products for use against a new insect is arduous and the procedure takes years.

Under the National Biodiversity Act (NEMBA), the Department of Environmental Affairs can declare PSHB an invasive pest which introduces a mechanism for emergency registration of chemical products – this would allow chemical products to be brought to market within a matter of months. Currently the Department of Environmental Affairs has not responded, despite several letters having been submitted from stakeholders and interest groups.

This inaction is inhibiting stakeholder response – chemical products for treatment are now not available for use this spring, preventing suitable control of PSHB at a crucial time. Our indigenous forests will be negatively impacted, and control is not possible in this context. Forested areas already host to the beetle face an unknown long-term impact on indigenous trees. There is a strong risk that the beetle will spread beyond South Africa and upwards into Africa.

An effective response to PSHB entails a combination of policy, procedure, resourcing, and collaboration. In some cases, trees need to be removed and the wood responsibly disposed of, in other cases trees can be treated. It is unavoidable that economic factors play a significant role in informing this decision.

Some experts advocate for the removal of reproductive host trees, and their replacement with PSHB resistant trees. This has the associated cost of tree removal and development of infrastructure for the destruction of infested wood. What is the value of a mature tree and how does the cost of removal and replacement compare to treatment protocols?

There are health downsides to certain treatment options. For example the spraying of public trees exposes the public and broader environment to excessive pesticides. The impact of run-off and contamination is a major environmental consideration. An insecticide currently being use against PSHB is Imidacloprid, this chemical is globally suspected to be as principal contributor toward bee colony collapse. What would happen to our urban ecosystem if suddenly this chemical were liberally sprayed in large volumes by both public and private service providers? A safer, and more environmentally friendly treatment delivery option is tree injection which adopts a targeted approach, preserves the existing trees, and minimises the collateral damage.

The stark reality is that the PSHB has entrenched itself in South Africa. We have moved away from the possibility of containment, and are now looking to control the infestation nationally. We will lose significant trees in our urban areas – a great loss of our environmental heritage. In addition, alternative PSHB resistant trees need to be planted.

Some public heritage trees will receive treatment – as part of an urban forest, how do we protect the beautiful mature London Plane Trees encircling the Johannesburg Zoo? Residents’ associations are urged to raise private funding to treat and protect their public trees. Some private individuals will go to great lengths to protect their mature trees. Most residents cannot afford treatment and will become burdened with the costs of removal of their dead trees. Trees provide a critical green lung in our cities and towns. Many people will realise one day that the trees in their garden and along their road are dead, and will only then becomes aware of PSHB.

What can we do? Report the problem via www.PSHB.co.za/Tree-Survey

Citizens need to engage with and notify government of the magnitude of this devastating invasion of this beetle.

We all need to take action. Go outside and look at your trees. If you find the beetle, report it. Put pressure on your local authorities to respond. Chemical and natural treatments can be used for prevention and treatment, saving your trees may be a battle that you fight every year. Some trees can be treated, other trees need to be removed and burnt so that the beetle can be controlled. The sooner the beetle is identified, the greater the chance of the trees survival. Stop this tree apocalypse before it’s too late. DM

Hilton Fryer, Managing Director of Heuristic Guru – a data science consultancy – is an advocate for profit-with-purpose. He believes that public-private participation creates efficiencies with social and environmental impact

The politics of business: It’s a matter of conscience