The age of rich, entitled assholes 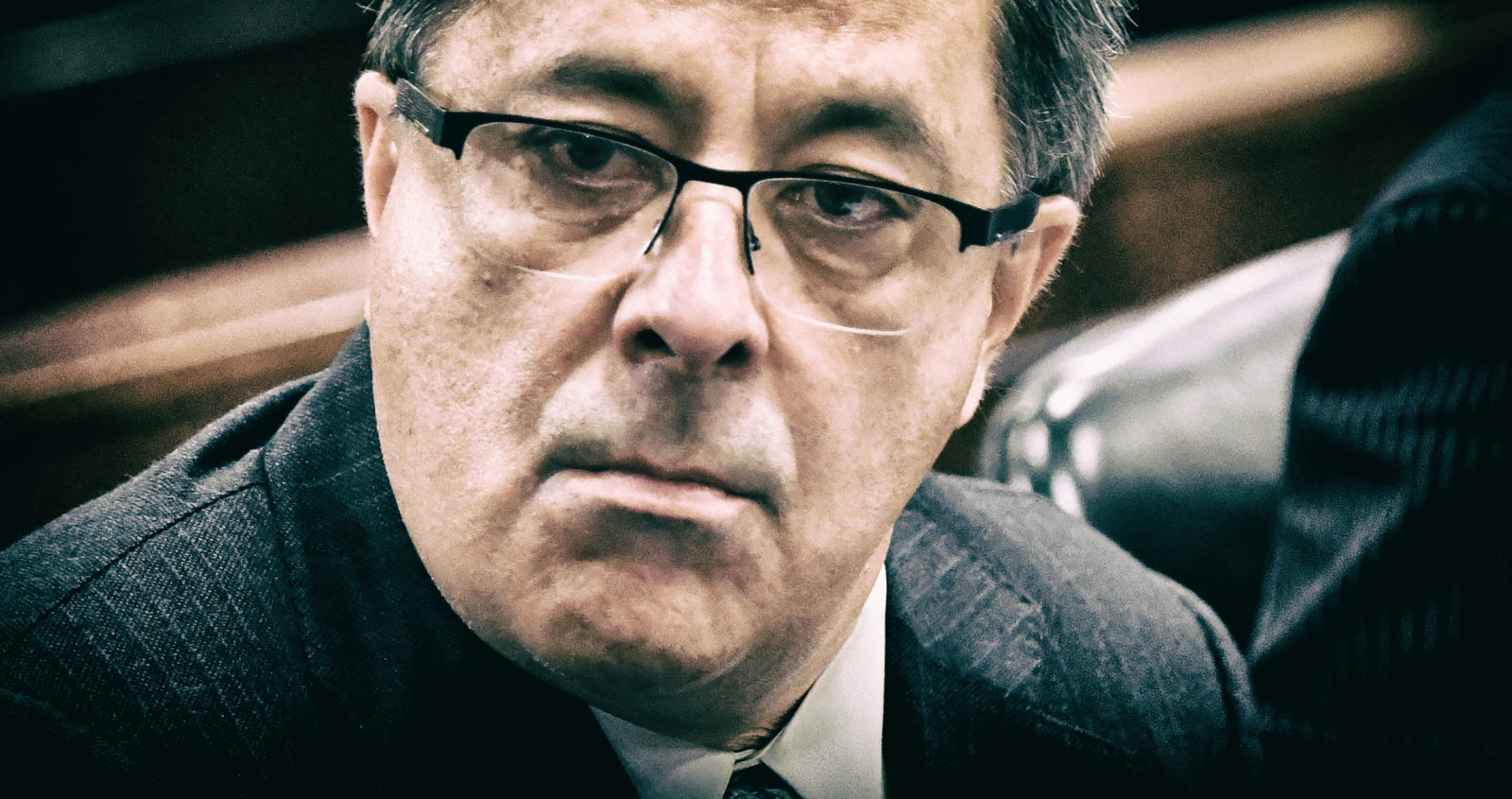 Last week, the former head of Steinhoff, Markus Jooste, made submissions before Parliament. Capitalism will never be the same.

A little secret about apartheid that seems to have been lost in the fire: Never in history have dumber people gotten richer faster. What’s more, after the fall of the regime, the elite power structure remained largely intact — if anything, the wealth and influence of South Africa’s richest citizens ticked up a few notches. In these terrible days of White Genocide, two episodes unfolded within the halls of Parliament last week that reminded us of apartheid’s primary legacy: the creation of rich, entitled assholes.

The first incident involved AfriForum CEO Ernst Roets, who made a submission before the Constitutional Review Committee, the government body tasked with investigating whether or not Section 25 of the Constitution should be amended. It’s become sort of a national pastime to beat up on AfriForum, serving as it does as the Afrikaner-rights lobby group for its 200,000 members. But the organisation does have a zesty appetite for kicking itself in the ass. On the expropriation without compensation issue AfriForum have gone into full-blown hysteria, and it makes for some interesting strategic decisions.

Regardless of one’s views on the land reform process, and whatever shortcomings may have emerged from the recent land commission road show, South Africans are debating the virtues and pitfalls of land expropriation like grown-up members of a flourishing, functional democracy. (Don’t worry, it won’t last.) But check out old Roetsie, who sauntered into Parliament like he owned the joint, and proceeded to data-dump a steaming pile of Institute of Race Relations mumbo-jumbo into the brains of our elected representatives. To wit: land reform is a plot to perpetrate the “national democratic revolution” and turn South Africa into a communist dystopia where everyone is forced to wear two-tone safari suits, read badly censored newspapers, and occasionally get liquidated by roving death squads.

Recordings of the Roets submission have gone viral, and sadly not because of the salience of his arguments. He was so aggressive and uncivil that he basically broke the Constitutional Review Committee. If AfriForum finds Floyd Shivambu expropriating their head offices and burning their Best Of InfoWars DVD collection, they’ll only have Roets to blame.

The tragedy, of course, is that in this era of undercooked faux-radical leftism, a conservative economic outlook on land reform deserves a proper hearing. Nationalising all land is objectively not the only solution to restitution. But for crying out loud: the ANC is not the Soviet-era Communist Party. If one insists on applying a unifying ideology to the congress, and I’m not sure why one would, call them crypto-capitalist rent-seeking pragmatist centrists. But, as Roets recently tweeted, “Sometimes people don’t want to hear the truth, because they don’t want their illusions destroyed.”

(Roets attributed the quote to Nietzsche, as many folk on the internet do. But Nietzsche never constructed that banal, D-minus T-shirt slogan. Instead, he wrote something far more bracing: “For the historical audit brings so much to light which is false and absurd, violent and inhuman, that the condition of pious illusion falls to pieces.”)

But anyway, in terms of entitled gentlemen visiting the Union Buildings, Roets was very much exhibit B. After all, Roetsie may be a bad lobbyist, but he ain’t a crook. That designation can certainly be applied to Markus Johannes Jooste (allegedly, of course), the businessman, horse-racing impresario, and failed CEO of the Steinhoff International Ponzi scheme group of companies.

Famously, in late 2017, after a public announcement of an investigation into accounting irregularities, almost the entire value of Steinhoff was wiped out in basically an afternoon. Steinhoff is a classic case of late-period capitalism’s industrial waste product: the malfunctioning transnational mega-corp. Headquartered in South Africa, registered in the Netherlands, Steinhoff has its primary listing on the Frankfurt Stock Exchange. A retail holding company, it has businesses on three continents, lumped into clusters that operate in silos and make their financial disclosures independently. At the end of the company’s financial year, consolidated results are delivered to Steinhoff HQ, where they are signed off by the auditors, approved by the board, and released to cheering shareholders. Except that Steinhoff had bought up a bunch of useless, underperforming operations and constructed a pyramid that was bound to topple.

This is a big, big problem, and it’s caught the attention of the German tax authorities, along with regulatory bodies both here and abroad. But why was the former CEO of the world’s largest, brokest shmatte business called before the parliamentary committees of finance, trade and industry, public service and administration and the Standing Committee on Public Accounts (Scopa) to offer his testimony? Well, the Public Investment Company (PIC), which is mandated to gamble with government employee pensions, had taken a vast position in Steinhoff. When the company tanked, the PIC lost $15.6-billion.

And so Scopa wanted a word.

Jooste doesn’t visit a toilet without his lawyers these days, and while he dodged an invitation to visit Parliament in March, on 5 September he showed up flanked by two advocates and two attorneys. Hilariously, Jooste insisted he saw nothing, and knew nothing.

“When I left Steinhoff on the 4th of December (2017), I was not aware of any accounting irregularities,” he claimed.

It’s awesome being a CEO. You just swish around in a private jet, feed sugar cubes to your favourite horsies and leave the real work to, well, who the fuck cares? The accounting irregularities came “like a bolt out of the blue,” he told Scopa. Auditing, he said, was not his responsibility. As far as his testimony was concerned, he had no responsibilities, other than looking awesome in an over-tailored suit.

He did take himself to task for partnering up with German businessman Andreas Seifert, with whom he entered a strategic partnership in 2007.

“Unfortunately, it turned out Dr Seifert was the wrong person to go into businesses (with) and the relationship was terminated in 2015.”

The divorce was bitter, as they usually are, which is probably why Seifert trundled off to the German tax authorities and started ratting.

“Seifert was attempting to use German tax authorities, regulators and the media to influence the ongoing civil litigation process under way in Germany, Austria and the Netherlands,” wept Jooste.

It wasn’t just Seifert, though. It was also South African billionaire businessman Christo Wiese, who served as chairman of Steinhoff’s board. Wiese sold an actual functioning company, Pepkor, to Steinhoff in 2014 for $5.7-billion, mostly because he wanted to get his assets out of South Africa (allegedly. Allegedly). Indeed, Wiese would offshore his last pair of cufflinks if he could. In 2009, he was busted trying to board a flight from London to Luxembourg carrying $1-million dollars in cash. According to a UK newspaper:

“Dr. Wiese explained the money came from diamond deals in South Africa in the 80s and 90s, and had been kept in a safety deposit box in the Ritz hotel because of foreign exchange restrictions in his homeland, lawyers for the UK Border Agency said.”

“The amount of money was consistent with Dr. Wiese’s stated wealth,” claimed Wiese’s barrister, “representing less than two weeks’ income and a minute fraction of his assets.”

Not any more, ha ha.

Wiese took a massive bath on Steinhoff, wiping more than $2-billion off his personal balance sheet. He has also claimed that the collapse was “a bolt from the blue” — those were the actual words he used with MPs three months ago. But his good friend and partner, Markus Jooste, believes otherwise. He told Scopa that Wiese had been in “close negotiations” with Deloitte, the auditing firm, at least a month before the collapse. Jooste’s insinuation is that Wiese could not have known nothing, while he himself could not have known something.

He was just the CEO.

Give the man a break.

Jooste is a smooth operator, so there’s no way he was going to burn himself at Parliament. But the mendacity on display was staggering. Steinhoff was many things, but it was also means for these morons to ensure that the bulk of their wealth was safely offshore in the metropole. They couldn’t even do that properly.

Between the new elite’s corruption and mismanagement and the old elite’s corruption and mismanagement, the South African economy is in bad shape. Ag, it shouldn’t come as a surprise to anyone that corporate South Africa is full of fools and crooks. (This excludes any of the advertisers who appear in these pages, all of whom are uniformly awesome.) But here’s my submission to Ernst Roets: nationalise it all. With Julius Malema as the future CEO of everything, at least there’d be one person to blame, and we wouldn’t have to toggle from government malfeasance to corporate thievery. Life, for journalists at least, would be much easier.

Alternatively, perhaps it’s time to get serious about reforming this country’s economy. President Ramaphosa knows what needs to be done – break up monopolies; flush new blood into the system; convince business to start spending their trillion rand slush funds. And to motivate the Hawks and other investing bodies to go after suits like Jooste. But in a recession, he has no room to manoeuvre. So we’re stuck with the hangover – all that apartheid money swishing around the system, and no one to account for it. DM