Lawyered up Markus Jooste blames Christo Wiese, ex-partner Seifert, and many others (El Niño and Trump safe, for now) 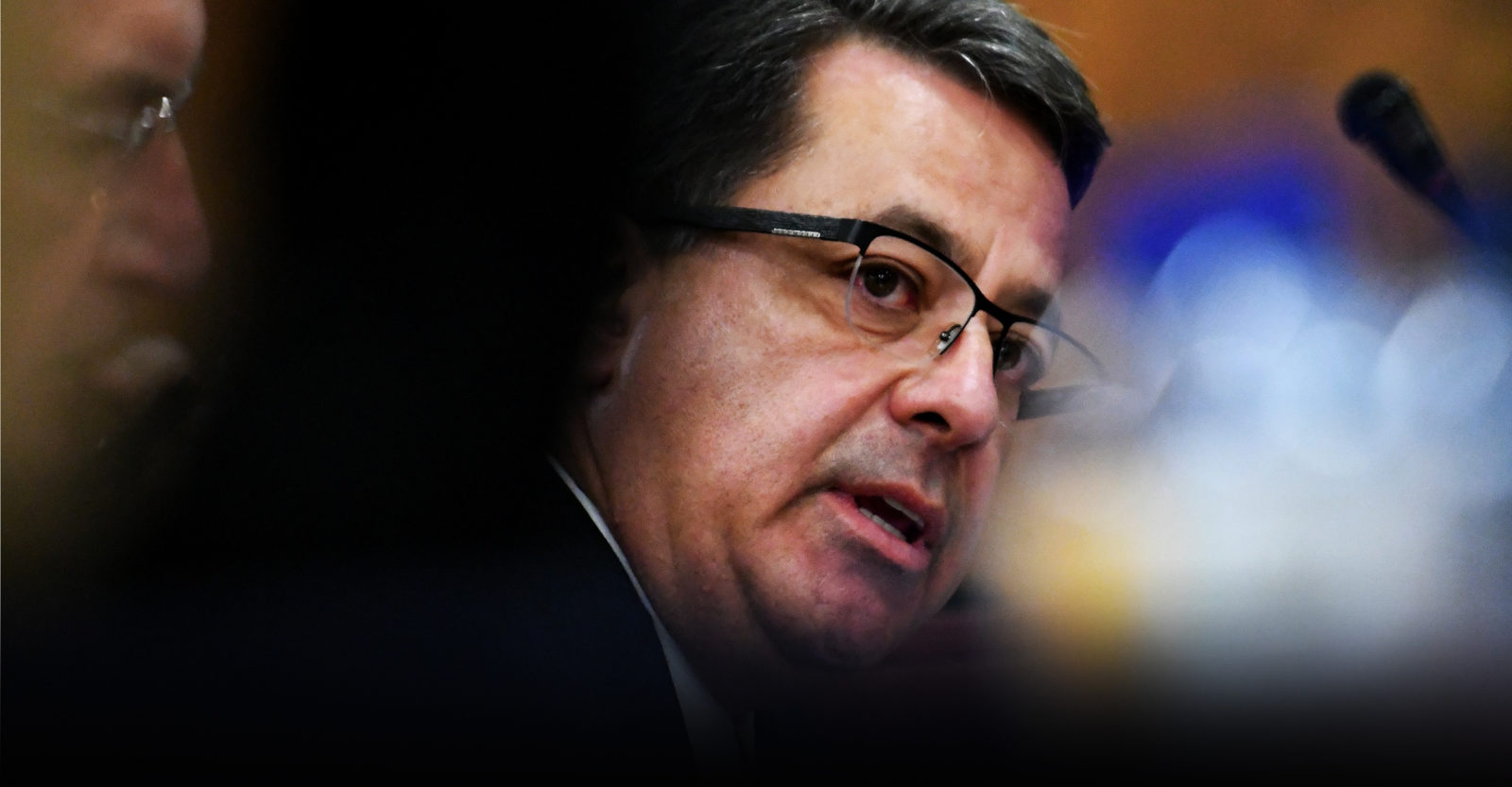 When business people turn on each other the punches don’t leave black eyes or broken limbs. But pretty it is not. Not in Germany, where ex-Steinhoff CEO Markus Jooste insists it was by ex-business partner Andreas Seifert’s campaign that triggered official and media attention on accounting irregularity claims. And not in South Africa, where on Wednesday Jooste seemed to drop his former board chairperson, billionaire businessman Christo Wiese, right into the Steinhoff share value collapse.

Lawyered up, and sticking to his script. That was Markus Jooste, the former Steinhoff CEO, stepping into Wednesday’s meeting with the parliamentary committees of finance, trade and industry, public service and administration and the Standing Committee on Public Accounts (Scopa).

In several rounds of questions, he stayed the course: there had been no accounting irregularities, which in his rulebook would be tantamount to fraud.

“When I left Steinhoff on the 4th of December (2017), I was not aware of any accounting irregularities,” said Jooste who, however, also pointed out that the group’s audit function was not part of a CEO’s responsibility.

His statement came a week to the day after ex-Steinhoff chief financial officer Ben La Grange told MPs, “I do not think I did anything wrong,” as he fingered Jooste for not sharing as much information as he should have – and just over seven months after former Steinhoff supervisory board chairperson, billionaire businessman Christo Wiese, had told MPs three working days before the board meeting that the whole accounting irregularities saga had been “a bolt from the blue”.

But on Jooste’s account, Wiese should have known. He said Wiese was involved in various discussions from mid-November when Deloitte Netherlands, the auditors of the mother company, Steinhoff International Holdings NV, again requested such a probe into persisting claims of accounting irregularities.

And Wiese had been part of the decision on 29 November 2017 not to adopt the Dutch auditor’s request for a new investigation into these irregular audit claims. This after a reportback by the two German companies appointed two years earlier to investigate these claims to say “categorically”:

“We have not found any evidence that the accounting… was not in compliance.”

But a day later there was a change – and the auditors sent an email saying there would be a new investigation by a firm approved by Deloitte.

On 4 December 2017, on his return from Europe, Jooste said, he discussed all this with Wiese. And it was agreed such a new probe was “unnecessary” and would delay the release of the Steinhoff financial indefinitely. Instead Jooste had this advice: ditch the auditors with immediate effect, announce the unaudited results which were 90% complete, and appoint a new auditing firm to finish the job by 31 January 2018.

“If that wasn’t going to happen, I could not remain as CEO,” said Jooste, adding that Wiese had agreed to this advised course of action.

“I personally believe that everything has already been investigated, for two years, by professional firms, and by German authorities for four years.”

What actually happened on 5 December 2017 was a public announcement of an investigation – the share value tanked and Jooste resigned with immediate effect. That new investigation by PricewaterhouseCoopers is still under way. Steinhoff supervisory board chairperson Heather Sonn told MPs last week the intention was to have the audited 2017 financial statement released in December 2018.

Jooste did not reply to various MPs’ questions as to whether Wiese had misled the committees of Parliament. That’s the value of being lawyered up. With two advocates, Francois van Zyl and Jeremy Muller, and two attorneys, Callie Albertyn and Salome van Zyl, it was unlikely Jooste would take a misstep.

He came to Parliament on Wednesday on the back of court action after a subpoena was issued and then withdrawn in a court-approved settlement that Jooste would answer on questions related to any institutional flaws and challenges in the financial regulatory framework, and what may have given rise to the collapse of the Steinhoff share value.

It came to this after, in January and March 2018, Jooste did not pitch up in Parliament as invited – the parliamentary nicety of saying “we want to talk to you”. That put Jooste in the same category as Dudu Myeni, executive chairperson of the Jacob Zuma Foundation and former SAA board chairperson, the three Gupta brothers and their business associate Duduzane Zuma. They failed to appear before the public enterprise committee’s State Capture inquiry between late 2017 and 2018.

For Jooste and his legal team it was all in the phrasing. The invitation “was written to us in terms of appearing for Steinhoff. I know the chairperson will say it’s a lame excuse (but) at that time I was no longer a party of Steinhoff”, said Jooste in the only comment that portrayed some frustration and impatience.

And phrasing remained on point throughout. When asked about not taking accountability for what has been described as South Africa’s biggest corporate scandal, Jooste’s response was that he was trying his best to answer.

“The biggest corporate failure, yes. Scandal – it’s the word of those seeking sensationalism.”

In South Africa that meant a hit of R15.6-billion by the Public Investment Corporation (PIC), the government-owned manager of R1.2-trillion assets, comprising overwhelmingly of government workers’ pensions and savings.

Jooste remained steadfast and quick with his words in his testimony under oath even as MPs questioned his narrative as a “whitewash” and aimed at portraying himself as the “Mother Theresa of Steinhoff”, or likened the company set up to a Ponzi scheme or even a spaza shop.

There was not a word of contrition, or even commentary on what could have been done differently with hindsight as at least two MPs asked. The closest it came was Jooste saying:

“It saddened me what happened to Steinhoff… the losses to pension funds, colleagues and people.”

If he had made a mistake – as per his December 2017 SMS to colleagues upon resignation – it was the 2007 strategic partnership with German businessman Andreas Seifert in the pursuit of a dream to rival Ikea, the iconic Swedish furniture company.

“Unfortunately, it turned out Dr Seifert was the wrong person to go into businesses (with) and the relationship was terminated in 2105,” said Jooste.

And that’s when all the drama started, as the former business partner made statements to the German tax authorities.

“Seifert was attempting to use German tax authorities, regulators and the media to influence the ongoing civil litigation process under way in Germany, Austria and the Netherlands.”

It appears the length of investigation is regarded as indicative of future success of civil or criminal proceedings. But shareholder and vendor litigation had already hit Steinhoff in various countries.

This week the company settled a legal dispute over German retailer POCO with Seifert some four months after an initial agreement to settle at the urging of courts in Germany and Amsterdam.

It’s complicated. Headquartered in South Africa, registered in the Netherlands, Steinhoff has its primary listing on the Frankfurt Stock Exchange. Business stretches across several countries on three continents in structures that operate independently with their own auditors ad auditing processes. It all comes together at the end of the company’s financial year, when all components deliver consolidated results to Steinhoff NV where, once signed off by their auditors and approved by the board, these financial results are released.

That German tax authorities are investigating is on public record, as are probes by regulators in Europe. In South Africa, the Independent Regulatory Board for Auditors (Irba) and Financial Sector Conduct Authority, despite being coy with details because of confidentiality, are investigating. The Hawks, seemingly, not so much.

Last week the Hawks’ commercial crimes head Major-General Alfred Khana told MPs of not having enough under oath to approach anyone, even as Steinhoff supervisory board chairperson Heather Sonn said the company had given its full co-operation to the Hawks – perhaps that had been to a different unit, according to company lawyer Robert Driman.

On Wednesday Jooste confirmed meeting the regulator in February, offering his assistance to the Hawks.

“I have attended an interview with the FSB (now the Financial Sector Conduct Authority) in Pretoria and answered questions.”

That’s despite having “no documents…. I lost my email, telephone and any records”.

For MPs it was clear more needed to be done on the investigation front, and quickly. Later this September MPs will canvass the Steinhoff debacle with the Hawks and Police Minister Bheki Cele. DM