DA and Msimanga outflank EFF and ANC for now, but as 2019 looms everything’s up for grabs 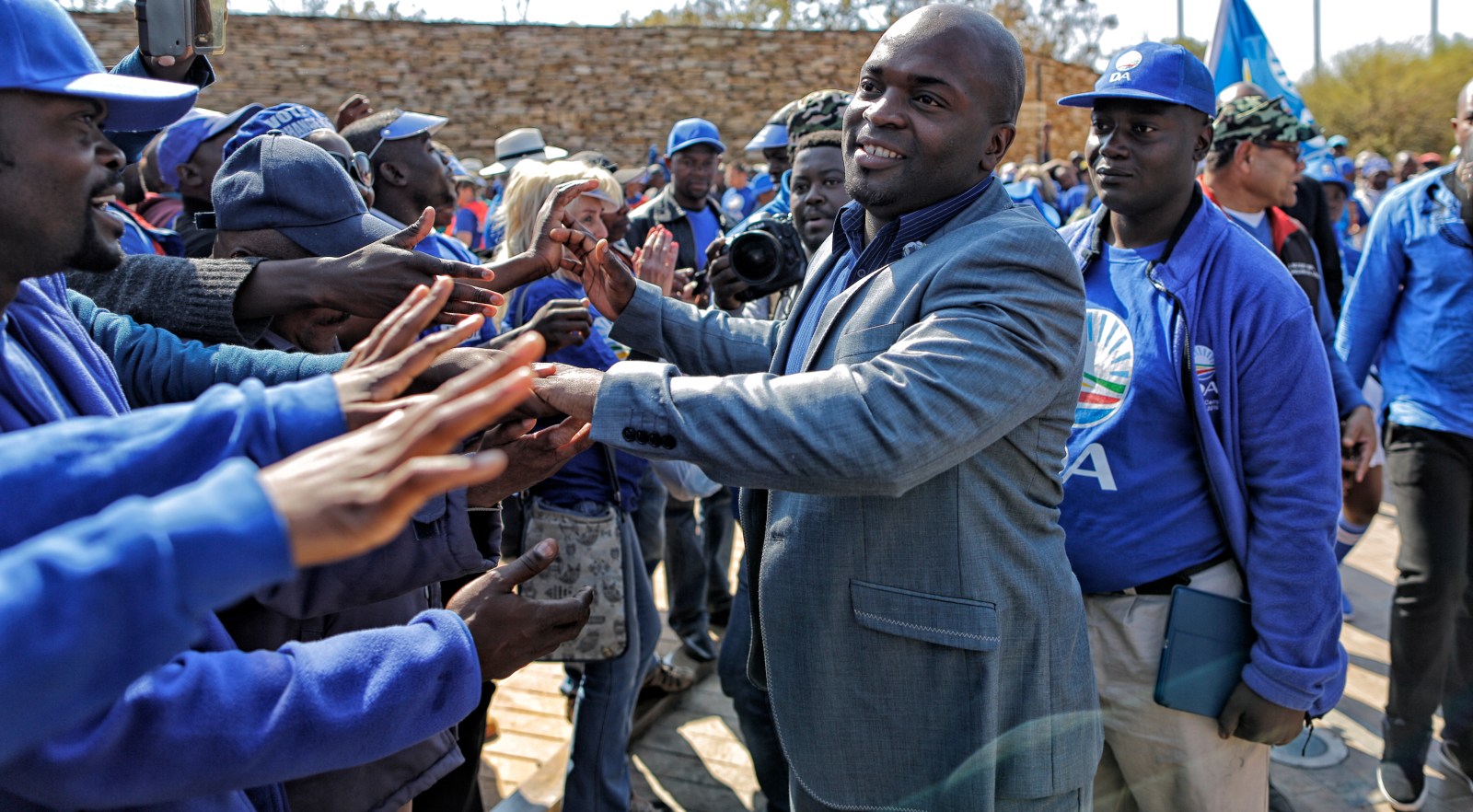 The Democratic Alliance’s Tshwane Mayor Solly Msimanga should have lost office on Thursday, according to commitments from the EFF and ANC. He survived as the ANC was outplayed and the EFF continues to benefit from its kingmaker role in municipalities ahead of the 2019 elections.

“Shit happens in politics,” DA councillor Kate Prinsloo smiled at the ANC bench, as if she knew what was about to happen.

“I’m asking that she withdraw ‘shit’, because shit is about to happen,” the ANC’s Lesego Makhubela replied.

The odds suggested the DA’s Tshwane executive mayor, Solly Msimanga, would be removed on Thursday through a no-confidence motion backed by the ANC and EFF. They had the numbers. Not much happened, except for much bluster, and the outmanoeuvring of the ANC.

On Monday, the EFF helped dislodge Athol Trollip’s DA-led coalition in Nelson Mandela Bay (the DA is contesting the council processes in court) and party leader Julius Malema said Msimanga was next.

Malema was resolute that the Tshwane mayor would be removed for failing to consult coalition partners, prioritising white members in his caucus, appointing unqualified staff, and seeking to suspend his City manager.

Msimanga met DA leader Mmusi Maimane and the party’s Gauteng leader on Thursday morning as supporters of the DA and ANC, and a few from the EFF, started gathering at separate events outside the Tshwane council chambers.

The DA and its coalition partners have 98 seats in council. The ANC has 89 and the EFF has 25. Together, the EFF and ANC, who said they both wanted Msimanga gone, would have had the necessary 108 votes to pass a motion of no confidence.

The council sitting started as usual – with a quorum, a moment of silence, and a discussion on the last meeting. Then the ANC and EFF sparred – occasionally criticising the DA-led coalition – over the insourcing of security workers.

The EFF’s Oliver Mabogwana began his point with a warning.

The ANC said the council resolution wasn’t about insourcing security workers who had been fired, but hiring new employees. But the debate was between the EFF and the ANC.

The EFF said the “liberation movement” had not focused on insourcing until the fighters demanded it. ANC councillors disagreed, but said they didn’t want to focus on it as they may collaborate with the EFF later in the day.

The ANC’s choice to replace Msimanga, Dr Kgosi Maepa, was allowed into council as a new member, awaiting his potential election as mayor.

Msimanga rose to give his executive mayor’s report. He said that in its two years in government, his administration had combated corruption and improved services. It had filled the leadership vacuum and stabilised the City’s finances to stop “this sinking ship from sinking”.

“The track record of our administration shows how hard we’ve worked to get Tshwane back on track,” said the mayor.

The ANC’s Aaron Maluleka was next.

“Mayor, if you want to give an outgoing speech, we will allow you. It will be inhumane of us not to allow that.”

The council rushed through the adoption of past minutes and reports. Waiting for the no-confidence motions, most councillors declined to comment on council resolutions. Councillors agreed to delay lunch.

“And now we move to the motion I can see everyone has been waiting for,” said Tshwane Speaker Katlego Mathebe, from the DA. The no-confidence motions.

The EFF’s motion against Msimanga was the first to be considered. The DA’s RM Williams rose to challenge the motion’s urgency on technical grounds. According to the rules, an urgent motion must explain its motivation for urgency and it must be explained in writing. The DA said the EFF hadn’t done so.

The EFF and ANC objected. The ANC tried to defend the EFF motion, but, ironically, its own motion, which outlined reasons for urgency, was used as an example of how the EFF should have tabled its plans against Msimanga.

“So for that matter, honourable councillors, this motion is disallowed. It did not comply,” Mathebe ruled.

Mabogwana from the EFF shot back.

“If you have a problem with me personally, we will address it outside, not here,” he said.

“As EFF we are not going to allow this thing to happen,” Mabogwana said.

He said the EFF would take the speaker to court and persist in its efforts to remove Msimanga.

“What happened to Trollip there is going to happen here. We are not going to give up, speaker,” Mabogwana said.

While DA members looked chuffed and Msimanga, in a blue suit, shirt and tie, smiled, the EFF packed up and left the meeting. Without support from the EFF, the ANC later withdrew its own no-confidence motion and said it would support the fighters in a court case against the speaker’s decision.

In a statement, the EFF said it would consult its lawyers on challenging the speaker’s decision and engage all stakeholders to develop a way forward. It said Msimanga led “a racist white caucus” and municipal leaders should in future act with humility and respect. The party has consistently called the DA arrogant. The EFF criticised the ANC for being “opportunistic” in trying to “hijack” the EFF motion and win the fighters’ vote.

The EFF made specific demands for councils governed by coalitions. It wants to see workers insourced, land given to the landless, and for 24-hour clinics to be opened.

The DA also spoke of moving forward. In a statement, the party welcomed Thursday’s outcome.

“Today, DA leader, Mmusi Maimane, will write to the EFF national leadership requesting an urgent formal meeting to discuss their ongoing co-operation with the ANC in attacking coalition governments across the country, and to seek solutions that are in the best interests of the residents of these cities.”

Msimanga told media that no deal had been done with the EFF, but the DA’s technical challenge and the EFF’s walk-out carried an air of the artificial.

There’s no evidence to suggest there was any prior agreement between the parties, but intense lobbying has taken place. If the EFF really wanted to remove Msimanga, it could have supported the ANC’s motion, although it has repeatedly refused to vote with South Africa’s ruling party in the past.

Regardless of the outcome, the EFF got significant political mileage though calling out the DA’s “white arrogance”. It hasn’t lost face by buckling to either the DA or ANC. The EFF still holds the cards in Tshwane and now may get some of its policy priorities implemented.

The EFF has already removed Trollip and could still remove Msimanga and Johannesburg Mayor Herman Mashaba. Elections are only months away and the EFF is setting the agenda in the country’s biggest municipalities. It’s up to the DA and the ANC to decide how they will react.

In the words, again, of councillor Prinsloo, “Shit happens in politics.” DM