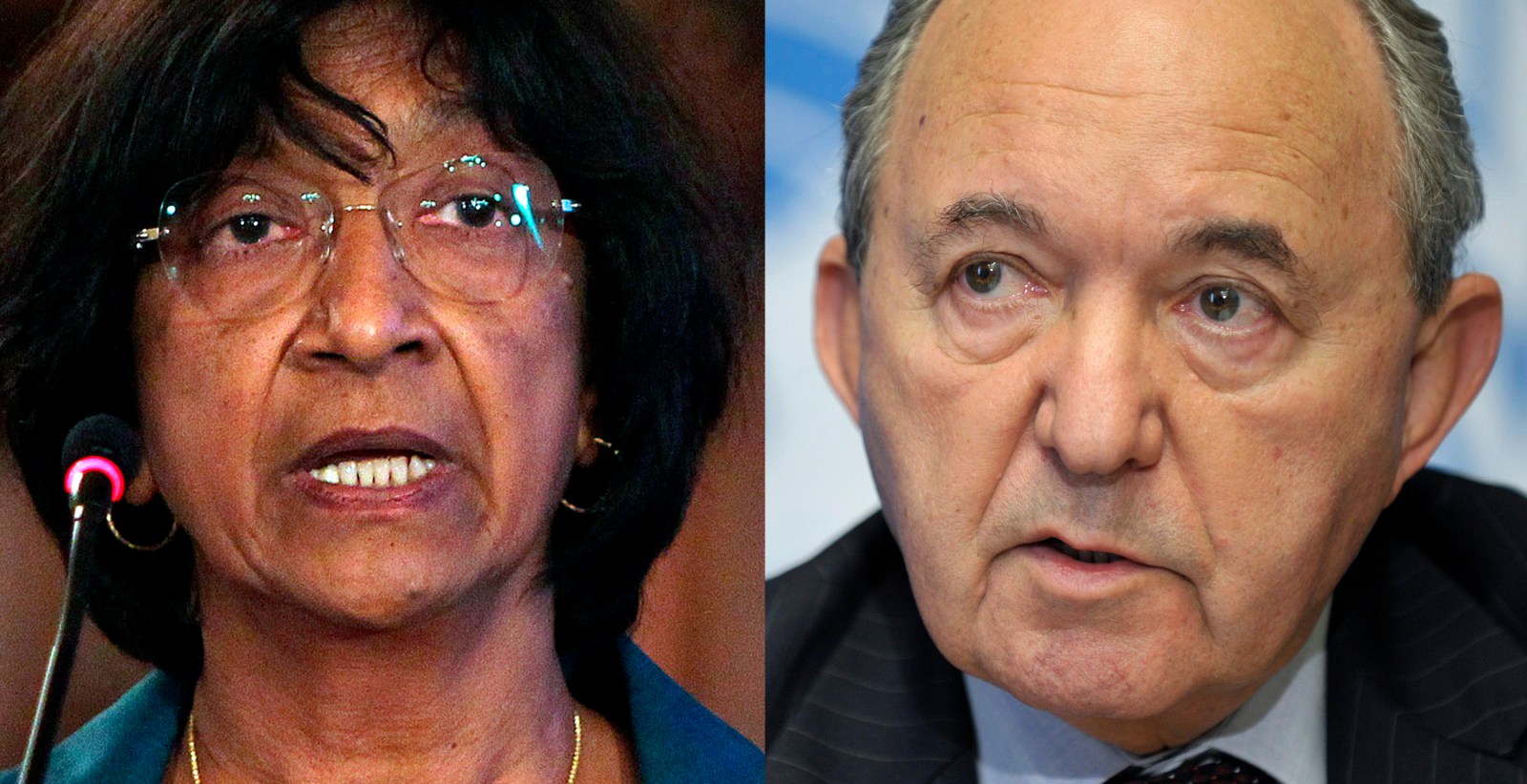 South Africa could help counter the global vacuum of respect for international law by supporting the International Criminal Court, says former Justice Richard Goldstone, who with Judge Navi Pillay has urged Justice Minister Michael Masutha not to withdraw the country from The Hague-based court.

Goldstone also told Masutha on Wednesday that at a time when the international legal order is under great threat, South Africa could “fill the vacuum” by standing up for international justice and remaining within The Hague-based ICC.

Pillay, Goldstone and Masutha crossed swords at a seminar on the theme, South Africa and International Justice: Charting the Way Forward, in Cape Town on Wednesdsay. It was organised by Germany’s Wayamo Foundation and the Africa Group for Justice and Accountability (AGJA) of which both Goldstone and Pillay are members.

In December 2017, Masutha introduced to Parliament the International Crimes Bill which would withdraw South Africa from the ICC and replace it with new legislation to implement South Africa’s commitment to international criminal law.

But the gist of the new bill is that it will extend immunity against prosecution for even the worst international crimes, such as genocide, to sitting heads of state and government and foreign ministers.

This is because the main reason for the South African government wanting to withdraw from the ICC is a dispute it had with the ICC in 2015 over Pretoria’s refusal to arrest Sudanese President Omar al-Bashir when he visited the country for an African Union summit.

In December the ruling ANC also adopted a resolution calling on the government to pull out of the ICC.

But the International Crimes Bill has been sitting in the National Assembly since December. There have been strong indications that there are sharp divisions in the ANC and the government about whether South Africa should withdraw from the ICC.

Masutha, who was appointed originally by former President Jacob Zuma, is believed to strongly favour withdrawal, while legal observers believe that International Relations and Co-operation Minister Lindiwe Sisulu – and perhaps President Ramaphosa – are among those against withdrawal.

Masutha certainly argued strongly for withdrawal on Wednesday at the Wayamo seminar. He said that after the dispute with the ICC erupted over Pretoria’s non-arrest of Al-Bashir, Pretoria had tried hard to engage with the ICC over its issues with the court, but had been ignored.

In the meanwhile, he said the uncertainty about South Africa’s legal position regarding immunity for visiting heads of state was severely disrupting South Africa’s diplomacy.

He confirmed reports at the time that the recent BRICS summit had almost been sabotaged because civil society organisations had made applications to the courts for orders to the state to arrest some visiting heads of state.

He mentioned only Indian Prime Minister Narendra Modi, whom a Muslim lawyers group had wanted arrested for alleged crimes against Muslim minority groups in Kashmir. However, other officials have privately said that Turkish President Recep Tayyip Erdogan and Egyptian President Abdel Fattah el-Sisi had also faced possible legal problems. Erdogan did visit South Africa, but only after these issues had been cleared, while El-Sisi stayed away.

Masutha also noted that a few years ago former Israeli President Shimon Peres had almost called off a visit to South Africa because of the threat of being arrested in this country.

Goldstone said the rule of law both in South Africa and internationally “has never been in poorer shape.” He cited particularly the strong efforts of the Trump administration to pull out of international agreements and organisations. He referred specifically to Trump’s efforts to undermine the World Trade Organisation’s dispute-resolution responsibilities by blocking appointment of judges to the body.

In this global vacuum of respect for international law, South Africa could help fill the vacuum by supporting international justice including the ICC, Goldstone said. UCT public law professor Richard Calland added to this appeal by warning Masutha that by withdrawing from the ICC, South Africa would undermine the confidence of potential investors in this country’s respect for the rule of law. This would ultimately hurt the economy and therefore also South Africa’s poor.

Goldstone and Pillay specifically called on Masutha not to withdraw South Africa from the ICC before decisions on two appeals that have been lodged about South Africa’s issue of immunity for heads of state.

In the first case, Jordan has asked the ICC’s Appeal Court to overturn the ICC’s condemnation of it, also for failing to arrest Al-Bashir when he visited that country. The case is due to be heard next month.

In the second case the African Union has asked the UN to appeal to the International Court of Justice for an opinion on Al-Bashir case. It is expected that the UN will rule on the AU appeal before the end of this year.

Masutha partly dodged Goldstone and Pillay’s question by saying that the decision about withdrawing South Africa from the ICC had now moved beyond his jurisdiction. He said he had done his part by introducing the enabling legislation to Parliament.

It was now up to Parliament to debate the bill – which he said it would probably start doing soon – and to adopt it or otherwise.

He said Parliament could in that process decide to take into account the Jordan case before the ICC Appeals Court and the AU appeal to the International Court of Justice.

Some seminar participants interpreted Masutha’s response as a hint that the government could use the parliamentary process to duck the issue.

Kaajal Ramjathan-Keogh, director of the Southern Africa Litigation Centre, said she did not think the government would make a final decision on withdrawing from the ICC before the general elections in mid-2019. The litigation centre is the legal activist body which brought the application to the High Court to order the arrest of Al-Bashir in 2015. DM