Theresa May rings the bell for post-Brexit UK-Africa trade 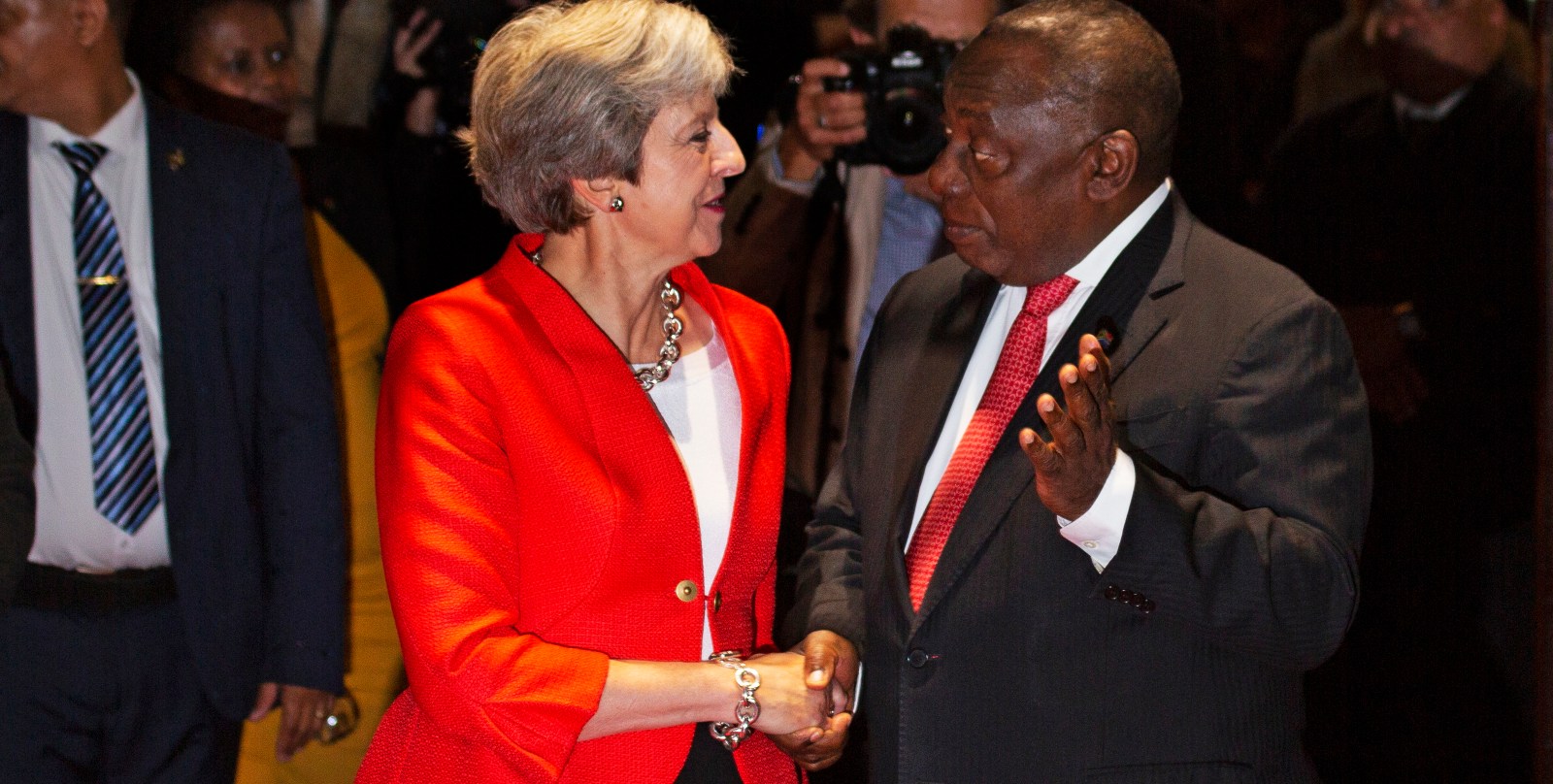 British Prime Minister Theresa May, on her first ever visit to Africa, pushed post-Brexit trade, investment and partnership when she met South Africa’s President Cyril Ramaphosa in Cape Town on Tuesday in the first of three continental stopovers. ‘By 2022 I want the UK to be the G7’s number one investor in Africa,’ she said after meeting Ramaphosa, repeating her earlier comments at a business forum. As always, the devil will be in the detail, and those remained outstanding on May’s working visit.

UK Prime Minister Theresa May came prepped and ready. There was the nod to Nelson Mandela, whose first address as a free man after 27 years in apartheid jails was made at Cape Town’s Grand Parade. There was the nod to the 607 black South African soldiers on route to join the Allies in WWI, who lost their lives on 21 February 1917 when the SS Mendi sank after being rammed by the Royal Mail vessel SS Darro.

“We will be forever grateful for their sacrifice,” said May of the maritime tragedy, but swiftly segued to saying it was now time to look forward, reinvigorated. The UK Prime Minister argued for closer trade and investment partnerships, touting British business’s readiness to invest for quality jobs and closer mutual co-operation.

“We are partnering with you to train the next generation of scientists,” said May. “We want to be South Africa’s partner as we deliver the better lives our citizens deserve.”

At the earlier business forum organised by the UK High Commission in South Africa, May indicated that on offer to the continent, not just South Africa, were “an additional £4-billion programme of UK (government) investment in African economies that will pave the way for at least another £4-billion of private sector financing”.

The “new ambition”, according to May at the forum and repeated after her meeting with Ramaphosa?

“By 2022, I want the UK to be the G7’s number one investor in Africa, with Britain’s private sector companies taking the lead in investing the billions that will see African economies growing by trillions.”

For May, her five-day first ever safari in South Africa, Kenya and Nigeria, is a platform to punt for new trade and investment opportunities for British business and government post-Brexit.

With seven months to go to the 29 March 2019 departure date, uncertainty is rising over the terms and conditions of leaving the European Union (EU). Talk increasingly is turning to a hard Brexit that would leave the UK isolated from trade, customs and other previously mutual arrangements.

Amid reports of companies that have long been based in London or the UK looking to relocating, some have come to that decision: consumer goods giant Unilever in March 2018 announced its move to Rotterdam, the Netherlands, even as it stressed it was not Brexit-related. Perhaps it’s not surprising then that May touted London as “the unrivalled global hub for international investment”, and the venue for the 2019 Africa investment summit that the UK prime minister announced.

More Brexit headwinds are likely, not only with regards to UK-EU negotiations, but also within May’s own Conservative Party. The Chequers Brexit deal clinched in early July unravelled within days, according to UK media reports, with the resignation not only of foreign secretary Boris Johnson, but also Brexit secretary David Davis, who was unhappy – again – over customs and trade links, according to The Guardian.

And Brexit kept nipping at May’s heels even as she was en route to South Africa. The Guardian reported on Tuesday how May downplayed pessimistic treasury reports, while admitting that Brexit without a deal “wouldn’t be a walk in the park”.

The prime minister, who had voted “remain” in the June 2016 referendum in which the slimmest majority voted to leave the EU, has found herself talking about and working on an issue she did not support.

In some ways that puts her in the same shoes as South African President Cyril Ramaphosa. As the ANC’s top official he has to negotiate the factionalised governing party’s sashaying between positions – the ANC changed its mind and now supports the need for a constitutional amendment for compensationless expropriation, for instance – or deal with the slow pace of action against senior ANC members such as Supra Mahumapelo, who controversially remains party provincial chairperson after having overseen as premier the economic collapse that triggered national administration.

In April 2018 Ramaphosa dashed from the Commonwealth Summit, on whose sidelines he and May had their first bilateral meeting, to deal with North West, which was burning with protests against Mahumapelo.

Maybe that’s why Ramaphosa, not just for diplomatic reasons, called her “friend” a couple of times during the carefully stage-managed moments of the working visit.

They had “reaffirmed our commitment to working together in pursuit of peace, stability and development on the continent”, Ramaphosa said at the official question-less briefing. Discussions had been characterised by “a renewed commitment to forge a closer partnership between our two countries”, he said, and both countries had identified – as “key sectors for investment to boost economic growth and development” – manufacturing, agro-processing, infrastructure development, mining, energy and tourism.

Working visits by their nature are works in progress. The closest tangible result recorded on Tuesday was the ceremonial signing of what was described as a “political agreement”, noting significant progress on post-Brexit UK trade relations with Mozambique and the Southern African Customs Union (SACU) of South Africa, Botswana, Lesotho, Namibia and Swaziland.

As discussions continue on this front, separate talks are also unfolding elsewhere, including agreements South Africa has directly with the EU under that Economic Partnership Agreement (EPA). And here Brexit could offer the opportunity to South Africa to negotiate separate trade deals with the UK on the same commodities or field of production, in addition to the EPA quotas.

The official thinking is that the UK’s departure from the EU would not affect South Africa’s existing quotas with the EU. After all, when new countries joined the EU such trade quotas weren’t renegotiated, so there should be no renegotiation when the UK leaves. Right now, it holds potential for South Africa, but there’s nothing fixed yet.

“New quotas are being negotiated with the UK,” Department of Trade and Industry Deputy Director-General Xolelwa Mlumbi-Peter told Daily Maverick.

Whether South African companies would make a play for such opportunities remains to be seen, as would be whether such benefits would translate any boost in company balance sheets into jobs. If companies came to the table in Ramaphosa’s call for a social compact, this would be unlike what happened in the jobless economic growth years under Gear (Growth, Employment and Redistribution) of the early 2000s.

Right from the start, investment has been on Ramaphosa’s ‘New Dawn’ renewal agenda, alongside the undertaking to raise US$100-billion.

Investment is regarded as crucial by government.

Billions of rand have been lost to State Capture deals, particularly in key State-owned Enterprises (SoEs), and the under-collection of R50-billion by the South African Revenue Service (SARS) has further strained national coffers.

It is against that backdrop that government is looking at all options as it is finalising adjustments to appropriations to be announced in October’s Medium-Term Budget Policy Statement (MTBPS), which will also signal priorities looking forward to the 2019 Budget.

“Every dollar and every pound helps,” Nene told Daily Maverick.

But until any investments and deals are signed on the dotted line, and the dollars and pounds are banked, the only concrete item in South Africa’s possession right now is the bell of the SS Mendi.

“It’s like we have repatriated the souls and the spirits of those who died on the ship,” Defence Minister Nosiviwe Mapisa-Nqakula told Daily Maverick. “Somebody would have rung that bell as the ship went down…”

May handed over this piece of South African history in a short ceremony at the presidential Tuynhuys offices on Tuesday. It was originally hoped by South Africa to have this bell returned home in time for the centenary commemoration of the 1917 maritime tragedy. That was not to be, amid red tape and bureaucracy which regarded it as the Queen’s property – and so the moment came 18 months late.

May this not be the tale of future UK-SA relations. DM