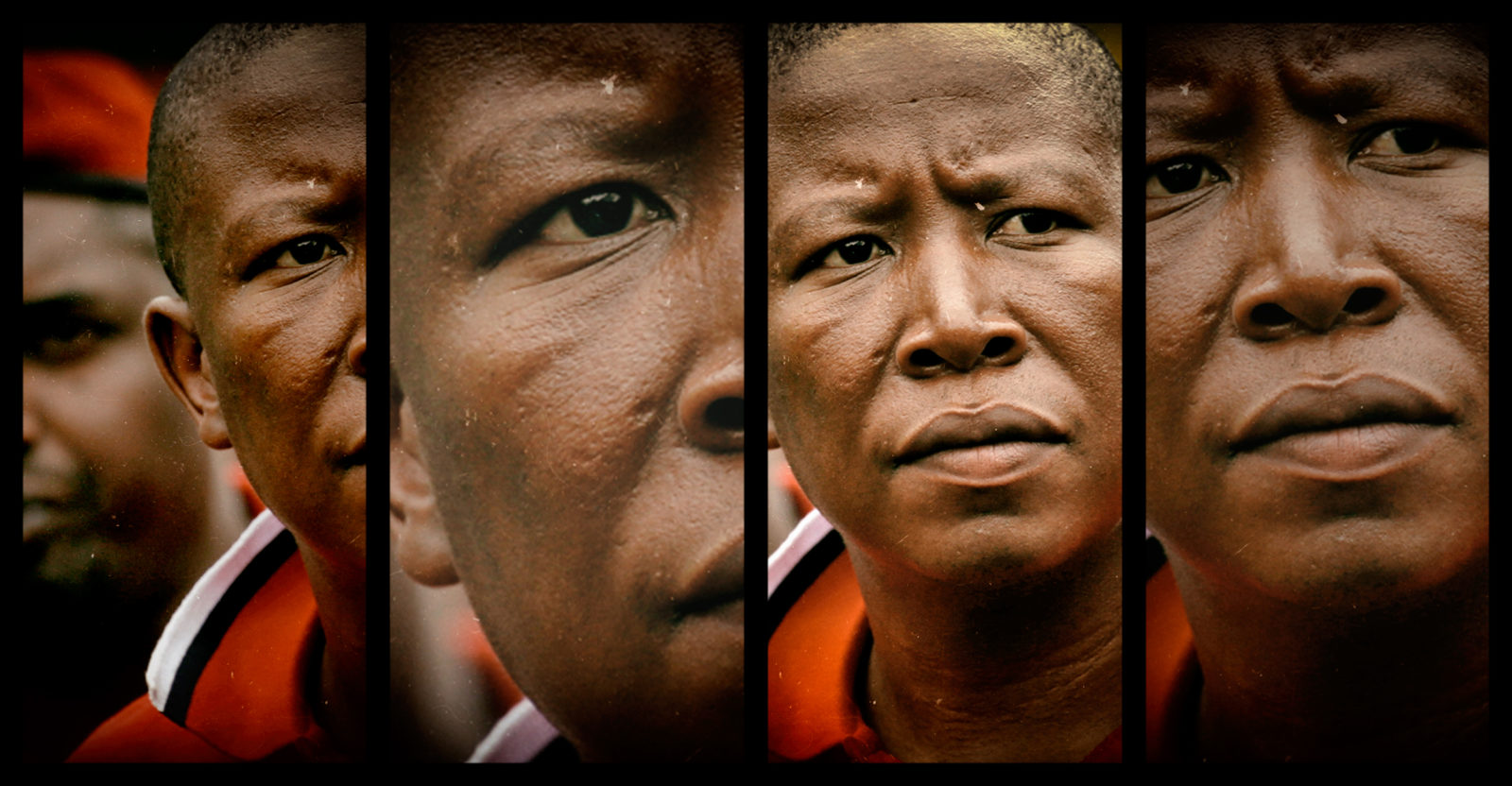 On Monday morning the Economic Freedom Fighters, voting on a motion brought by the United Democratic Movement and supported by the ANC, were able to remove the DA Speaker of the Nelson Mandela Bay Metro, Jonathan Lawack, and then, later in the day, the mayor Athol Trollip himself. No matter what happens next, this major political tremor is going to have a seismic impact upon governance, and it will possibly be felt in other metropolitans around the country.

The UDM’s Mongameli Bobani was voted in as the new mayor of the Nelson Mandela Bay Metro on Monday, and then he appointed a new Mayoral Committee. And there is still the EFF’s action in Tshwane to come this week. There is still much ground to cover, and very difficult political decisions to canvass. At the moment, it appears the only safe prediction to make is that there will be more chaos in local government soon.

The successful motion to remove Jonathan Lawack from the position of NMB Speaker came about only because of the behaviour of what currently appears to be a now-former DA councillor, Victor Manyati, who said that he would abstain. This meant that together, the UDM, the ANC and the EFF were able to muster 60 votes while the DA could only manage 59, with their caucus, the ACDP and the IFP to vote against it. In other words, it was as close as close can get.

This then set in chain the events that saw the DA councillors leave the chamber. The other parties waited for the Eastern Cape MEC for Co-operative Governance and Traditional Affairs Fikile Xasa to send an official to oversee the election of a new speaker. With no DA members in the room, Bobani was elected mayor, and then proceeded to appoint his members of the mayoral council.

There are obviously many questions that stem from this latest mess. The first is if, or more likely, when, the DA will challenge this in court. The MEC does have the responsibility to deal with a situation like this, and, as the law has been interpreted here, can delegate that responsibility. In other words, and this will be contested, it appears on the face of it that the correct procedures were followed in removing Trollip.

But the real instability may well be in Bobani’s city administration itself. He is in the only UDM member in it. He has appointed mostly ANC councillors to his committee (including Andile Lungisa, who was sentenced to two years in jail for assault), a councillor from the United Front, and one from the EFF.

This is a first for a few reasons. This surely means that the EFF is now in a formal coalition with the ANC, but under a UDM mayor. The likelihood of them all agreeing on policy seems low, at least in the longer term. As a result, there’s a realistic chance infighting would start soon. Bobani himself must surely be aware of the power that the ANC and EFF will have over him, and he won’t find that a very comfortable position.

Either way, in terms of simple governance, a coalition of willing often turns into a coalition of fighting. This is the city that saw the writing of the factual account of, literally, “How to Steal a City”, by Crispian Olver. Now the party that created that situation is back in power there. If not de jure, certainly de facto. Just to add to the potential instability, the United Front was formed out of the decision by Numsa to leave Cosatu over its refusal to stop supporting the ANC. Which means a party formed out of grievance with the ANC is now in a mayoral committee with the ANC.

Coming against the backdrop of the situation in Tshwane, where the EFF is bringing a motion to remove the DA’s Solly Msimanga as mayor on Thursday, it would appear to herald a very real change on the part of the EFF. But, it should also be remembered that the situation in NMB is quite different. In Joburg and Tshwane the EFF voted with the DA to elect the Speakers and mayors in the council. In NMB they never did that, and in fact had always voted against the DA. The EFF has never been troubled by this inconsistency in the past. The question now may be whether it will be troubled by consistency in the future, and particularly on Thursday.

In some ways, all of this appears to show two sides of the same coin when it comes to the EFF. The first is the power that they have as the alleged “king-makers” in situations like this. In NMB, Joburg and Tshwane they are able to decide who will form a government. That is a strength, and should not be underestimated. But there is a weakness inherent in this position, too. They can only choose between these two parties. And both of these choices have inherent problems for the EFF. This problem has not changed since the election of August 2016; the EFF can either go with the DA and pay the price of supporting its ideological opponents, or go with the ANC and pay the price for giving power to the very party it has been campaigning against. (If indeed there is an electoral price to pay for that.)

Both of these are difficult positions to be in. Considering that we are relatively close to a national election, it may be possible to determine what Julius Malema is planning from his course here. Should he go with the ANC, it will lead to speculation that he really does want to go back there, even if that poses problems. If he goes with the DA, that appears to be proof that he is determined to keep ploughing his own way. The problem of course is that voters may feel they need a reason to trust him, and this decision is a test of whether he can in fact be trusted. Unless others simply believe the ANC is the natural party of power, and thus decide to reward him.

However, there are other potentially big problems that raise their heads all along the way.

Earlier in 2018 the ANC in effect refused to try to remove Trollip in NMB with the EFF. At the time, it appeared that this was because the ANC was wary of governing with the EFF. You can imagine the problem. If Malema is going to remove Trollip by “cutting the throat of whiteness” because he has problems with the DA’s view on land expropriation, there is nothing to stop him from holding the ANC to ransom in exactly the same way. Already the ANC is facing claims that it is being led by the EFF; to give it any more power would lead to more of the same problems. This obviously holds for all of the metros that are in this position.

In NMB in particular, previous bids to remove the DA have failed largely because the parties involved, the ANC, the EFF, the UDM, the United Front and, wonderfully, the Patriotic Alliance (which has changed sides on this at least twice already), could not work out who would be mayor.

Based on that experience, there’s every reason to believe the citizens of these metros will have to face more disruption and lower governance standards.

This is probably what has driven the Gauteng ANC’s claim over the weekend that there should be fresh elections in Joburg and Tshwane. They are trying to sidestep the EFF, and are hoping that the recent changes in the ANC’s top leadership are enough to ensure that they get a proper mandate from voters this time. But none of this is necessarily certain. It is obviously completely disingenuous of the ANC to claim that these cities are run by “unholy coalitions”, when it refuses to countenance a similar election in Ekurhuleni, where it governs only through the help of the African Independent Congress. On SAfm on Monday morning, the leader of the ANC in Tshwane, Dr Kgosi Maepa, refused to answer questions about Ekurhuleni, claiming that was “unfair” as that question should only be directed to the provincial ANC. A weaker excuse is hard to imagine, particularly as he had been at the press conference with the provincial leadership the day before. It shows that there is no answer to that question. And voters will surely be aware of that.

At the same time, voters may also well remember what the ANC’s governance was like in both Joburg and Tshwane, and why they did not vote for the ANC there in 2016. Issues like Joburg’s billing crisis (which lasted over a full decade) and the in-fighting in Tshwane (which was so violent guns were fired at internal party meetings) will be well remembered by residents. You can imagine the ANC’s embarrassment should it not work that well.

On balance though, early elections are unlikely. The DA has a well-oiled legal machine, and will surely contest any bid by anyone, be they the ANC by itself or through provincial or national government. This means that any fresh municipal election is probably at least 18 months away.

All of this suggests that while some people have room in which to move, there are going to be consequences for all of the parties involved, no matter what the headlines of the day are. The players in this latest game cannot necessarily foresee those consequences as much as they would like to – local government is bound to get much more chaotic and difficult to predict. It will have consequences, and only a few of them could be positive. DM