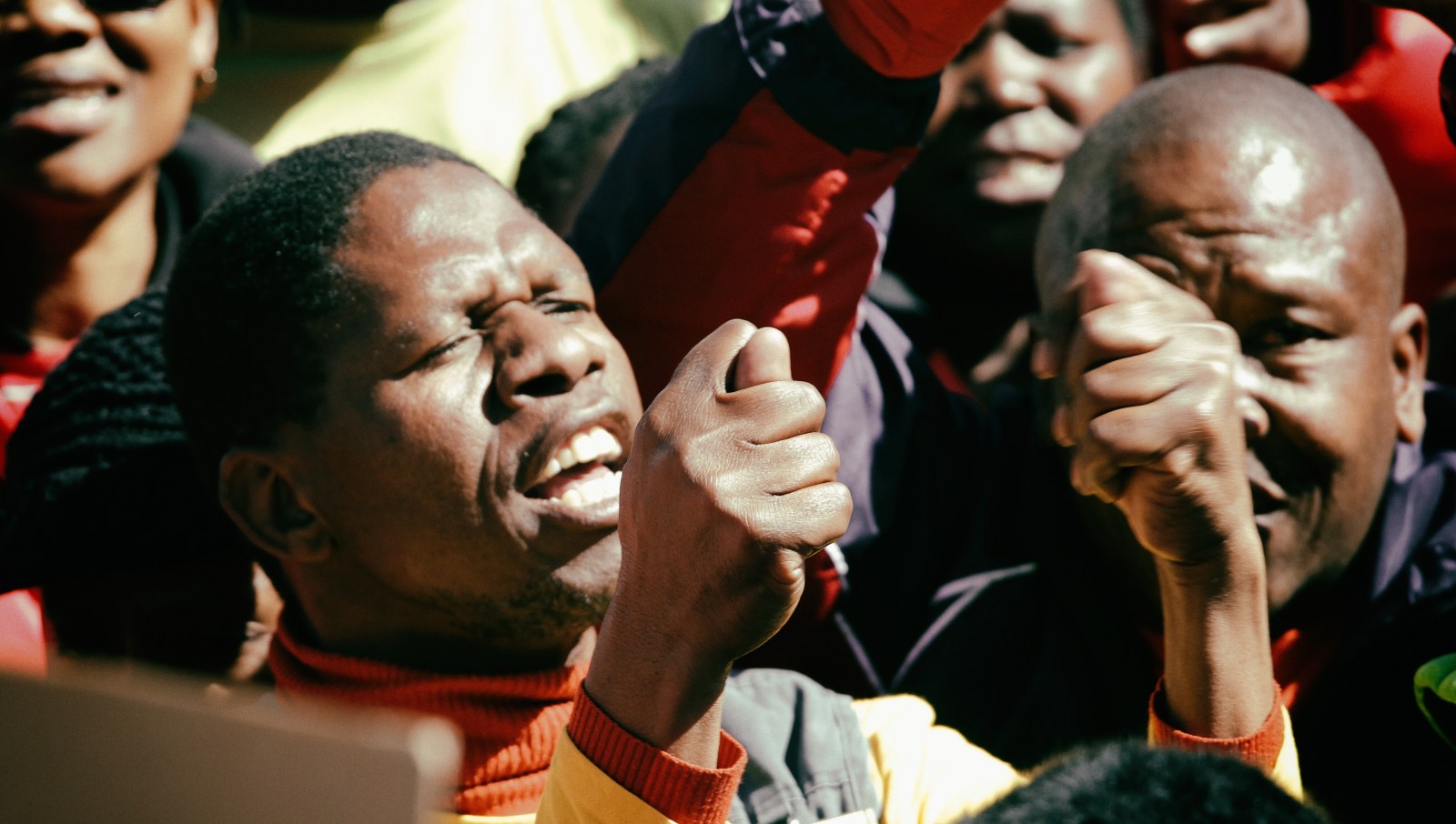 One of thousands of civil service employees expresses his displeasure with the South African government during a protest march at the Union Buildings in Pretoria, South Africa, 10 August 2010. EPA/JON HRUSA

While it is now clear that President Cyril Ramaphosa is facing many battles in the quest to consolidate his power and then roll back some of the problems created by his predecessor, calls have grown for him, and his followers, to show some inner steel. It appears that in at least one instance he and his government are doing exactly that.

The Minister of Public Service and Administration, Ayanda Dlodlo, is publicly adamant that the public service needs to be restructured, but backpedals from claims that thousands of government workers will lose their jobs. From their side, Cosatu is already claiming not to “trust the minister”. This is a repeat of a perennial dynamic within government and the alliance. But this time it appears that change may actually be coming.

For year after year, Finance Minister after Finance Minster has stood in the National Assembly while delivering their budget, and publicly lamented the cost of our civil service. Time and time again it has been pointed out that South Africa simply cannot afford to spend over half our budget on paying people. That means before any service delivery happens, or social grants are paid, half the money available is gone. As a result, there is very little left for investment, or to fix, say, Eskom or build proper toilets in schools. But, up until now, no one has had the political stomach to grasp the nettle.

The nettle, in this case, has always been a particularly troublesome one for the ANC, with the unions which represent workers in government and in the public sector well represented within Cosatu. As a result, Cosatu has always stymied any proper reform, threatening that their members will not help the ANC campaign during an election, or even stay away from the polls altogether. But now, something seems to have shifted in this dynamic, which suggests both sides are preparing for something major.

Last week the Mail & Guardian quoted from an extensive interview with Dlodlo. She put her case in this way:

Just on its own, that is a quote with some impact. It seems to be saying that government is prepared to go ahead with real change. She does go on to say that “the point is that you don’t restructure to get rid of people. You restructure to make the system effective and efficient. Will it result in a loss of jobs losses? I don’t know.”

While this may go a little way to mollify Cosatu’s leadership, they will be very concerned about the distinct lack of usual denial that jobs will be lost.

But in fact, despite whichever words are used, it appears Cosatu does believe some of its members will lose their jobs. Fin 24 quotes Cosatu general secretary Bheki Ntshalintshali as saying that “our issue is that we don’t trust the minister. We want the ANC to come out and say ‘it shall not happen’.” He goes on to say that workers will have to “decide who to vote for. They may choose not to vote for anyone as has been seen in other countries when the liberation movement does something workers don’t like”.

In essence then, to judge from just the public comments of both sides here, they are preparing for a showdown. The question then will become who will win, and possibly, who is more desperate.

It has become more and more obvious over the last few years that Cosatu is not the force it once was, when it could keep almost all government workers out on the streets for over a week at a time. Those days are past. It has been too badly damaged by infighting within it, bigger dynamics around the world of work, and also many Cosatu officials were swept off their feet by the Zuma tsunami. This led to the organisation publicly calling on Zuma to leave office after having publicly defended him, while in the mess and muddle it lost both Numsa and its then general secretary, Zwelinzima Vavi. As a result, it has lost a large number of members that it had in the private sector. Thus, it is much more dependent and reliant on its members in the government sector. If government is able to press ahead and make changes here, Cosatu could find itself weakened still further. This may mean that it will have to fight very hard.

It also appears Cosatu have lost some of its power within the ANC. While it did support Ramaphosa at Nasrec, it almost appeared not to matter. This is partly because, like other bodies, its previous support for Zuma has served to weaken it in some arguments. It may also be because its current chair, S’dumo Dlamini, is seen as very close to Zuma, when the rest of the federation was against him.

At the same time, public sympathy may no longer be with unions. While Numsa obviously belongs to Cosatu no more, the National Union of Mineworkers does, and the recent sabotage at Eskom by the members of either Numsa or the NUM will not create much love from the long-suffering public. At the same time, years of strikes at schools by the SA Democratic Teachers Union and of city centres being trashed by the SA Municipal Workers Union don’t help their cause either. The idea that union members are the “working poor” also may not find the ground that it once did. This is an indication of how much our society has changed, as many people will focus on the “non-working poor” who are by definition in a much worse position than those who work for government.

Government also has several weapons that it can bring to bear. The first is that it can use a policy of reform by stealth, by simply not filling the posts of workers who retire from the service. It can also offer severance packages which may seem very attractive to people who are towards the end of their working lives. And it can also dare Cosatu to try to flex its power, and hope that it will be less than impactful in that. Should people die because Nehawu members block their entrance into hospital (as happened at a recent strike in North West), then public opinion may well harden against the unions.

However, this battle will not just involve government and Cosatu. It will also involve the Public Servants Association. They have already warned of “serious consequences” if government goes ahead. But again, all they can really do is strike. In some ways, they’re actually weaker than the Cosatu-aligned unions, because they can’t go through the alliance.

In the final analysis, this may be a simple power calculation. If Dlodlo and Ramaphosa believe that Cosatu is sufficiently weakened, and the PSA lacks sufficient power, they may well press ahead with their quest to reform the civil service. This would appear, at the moment, to be their plan. In the process, they may make one of the biggest changes to government since 1994. Not only is there the prospect of a cheaper and more capable state on the horizon, but also a sea change in relations between government and the unions. There is much for them to win here, and this may be their moment. But any victory is unlikely to come without a fight. DM