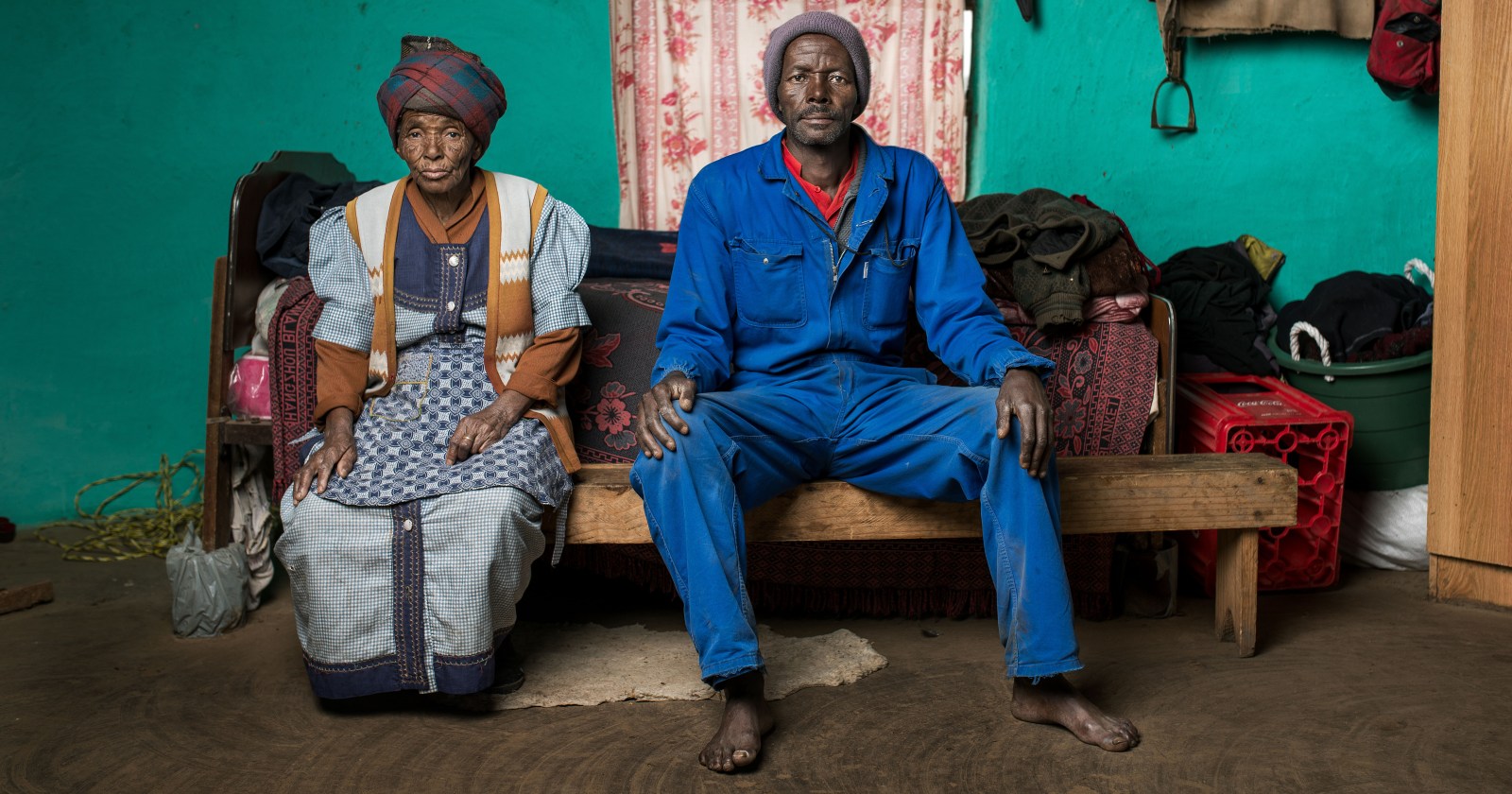 Xolisile Butu is 60 years old and lives in Skhobeni in the Eastern Cape with his 86 year old mother Adelaide. His wife works in Komani and earns the money for the household - she only comes home once a month. Mr Butu was diagnosed with pulmonary tuberculosis (TB of the lungs) in 1992 after working on the mines for 7 years. He received R1000 (approx. £50 or $72) in compensation.

Negotiations are currently underway in New York for a United Nations (UN) political declaration on tuberculosis. In order to have a meaningful impact on the TB epidemic, members states must make concrete commitments to address the global TB crisis – a crisis that kills more than 1.5 million people globally every year and that remains South Africa’s leading reported cause of death.

On 26 September 2018, UN member states will come together in New York to ratify this political declaration, yet current drafts of the declaration are woefully inadequate and undermine efforts to ensure people living with TB have access to better and more affordable TB medicines, vaccines and diagnostics. While current drafts contain some good rhetoric, hardly any concrete commitments are made. Such a lack of concrete commitments will render the declaration and the process around it toothless.

While the South African government is leading the way in attempting to redraft and improve the declaration, pressure is mounting against them, particularly from wealthy countries. For this UN process to have any meaning for the people in South African townships, our hard-won rights to access medicines must be enshrined in the main text of this declaration. These rights are not just a legacy from the last two decades of people with HIV fighting for their lives as part of a larger access to medicines movement, but also a lifeline for people who will need affordable medicines, vaccines and diagnostics tomorrow. What use are new tuberculosis medicines if high prices mean people cannot access them? Our lives must be placed ahead of the greed of big pharma, especially given that most big pharma companies have abandoned TB research altogether.

There are a number of legal safeguards allowed under international law that protect the right to access healthcare and medicines. However, these rights are missing from the current drafts of the declaration. With new medicines for drug resistant TB (DR-TB) becoming available for the first time in over 50 years, using these safeguards will be vital for the future of treatment in South Africa, and across the world. It will be imperative to address patent barriers to lower prices and scale up treatment access, as was the case with HIV treatment in the early 2000s.

Currently medicines are often priced out of reach of those who need them. Bedaquiline for example, is a safer and far less painful alternative to the current injectable medicines that cause hearing loss in nearly half of those who take them. Importantly it also saves many more lives. In South Africa, bedaquiline is priced at USD 400 per course, and in most other countries it costs much more, as much as USD 30,000 in certain places. Yet, researchers estimate a six-month course can be profitably produced for less than USD 100.

Excessive medicine pricing is nothing new to South Africa – a country that faces one of the highest global burdens of DR-TB, with over 19,000 cases diagnosed in 2016. For several years, many people with DR-TB were unable to benefit from the drug linezolid. While it was under patent it was priced at over ZAR 700 (USD 47) per tablet, while generics in India were available at a fraction of the cost at ZAR 25 (USD 2). People who say medicine pricing is not an issue in TB are spitting in the faces of people who needed linezolid and could not access it, and turning their backs on people who cannot access the newer drug bedaquiline.

Using these public health safeguards is nothing new or controversial. UN member states have repeatedly reaffirmed these rights and committed to protecting and using these so called “TRIPS flexibilities” in the Political Declarations emerging from the UN High Level Meetings on HIV in 2006, 2011 and 2016, the Political Declaration signed at the UN High Level Meeting on Non-Communicable Diseases in 2011, the UN General Assembly Resolution on Global Health and Foreign Policy in 2014, and in the Sustainable Development Goals (SDG3b) signed in 2015. The UN High Level Panel on Access to Medicines in 2016 recommended that all WTO members “should commit themselves, at the highest political levels, to respect the letter and spirit of the Doha Declaration,” and noted that when governments make “full use of the flexibilities in the TRIPS Agreement, they can protect and advance public health objectives.”

For the United States and other countries to attempt to roll back these rights in a TB declaration, a declaration on a disease that impacts mostly poor people of all things, is deeply cynical. Do these countries really not care whether we live or die? Or is their only real concern that we will get on planes and bring TB to their countries? Is the UN declaration nothing more than PR for them?

In addition to excessive pricing, TB is also typical of a wider crisis of underinvestment by both pharmaceutical companies and governments in diseases mainly impacting poor people. As it stands the global patent regime skews the incentive to research and develop new medicines and medical tools to where the most money can be made. Current drafts of the declaration continue to include problematic wording around this that wrongly suggests patents incentivise R&D – a myth repeatedly peddled by the pharmaceutical industry, and repeatedly proven to be wrong, particularly in relation to TB.

The entire world only invests around USD 0.7 billion on TB medicine research every year – a third of the USD 2 billion that the World Health Organisation estimates is needed. This means in many cases as people with TB we are stuck with older treatments that are painful and have low success rates. There is urgent need for new medicines, diagnostics and vaccines. We need a new system of financing innovation that will prioritise R&D based on need not greed. This is something the declaration should be calling for. Countries negotiating must remember that prioritising the health of your people can be done without harming future innovation. We have just such an example of an innovative drug development framework in the Life Prize, again, with the exception of South Africa, governments have not been willing to back this project.

We urge the South African government to stay strong in the face of political pressure and to ensure the inclusion of a strong commitment on the use of TRIPS flexibilities in the main operative text of the TB declaration. This must include commitments to a) use to the full extent of TRIPS flexibilities to ensure access to medicines, and b) to ensure that intellectual property provisions in trade agreements do not undermine the Doha Declaration.

We further call on all other governments, and particularly other high-TB-burden countries such as India and China, to support South Africa’s proposals on the use of TRIPS flexibilities and proposals on alternative models of R&D. We found incredible international solidarity on these issues in 2001, if countries are serious about TB we will again find solidarity on this in 2018.

We are not alone in this. Civil society groups from across the world have made similar demands. It is time governments listen. Our people are dying of TB – governments must now show they are serious. DM

Tshabalala is the National Chairperson of the Treatment Action Campaign and Rugege is the Deputy Director of SECTION27.