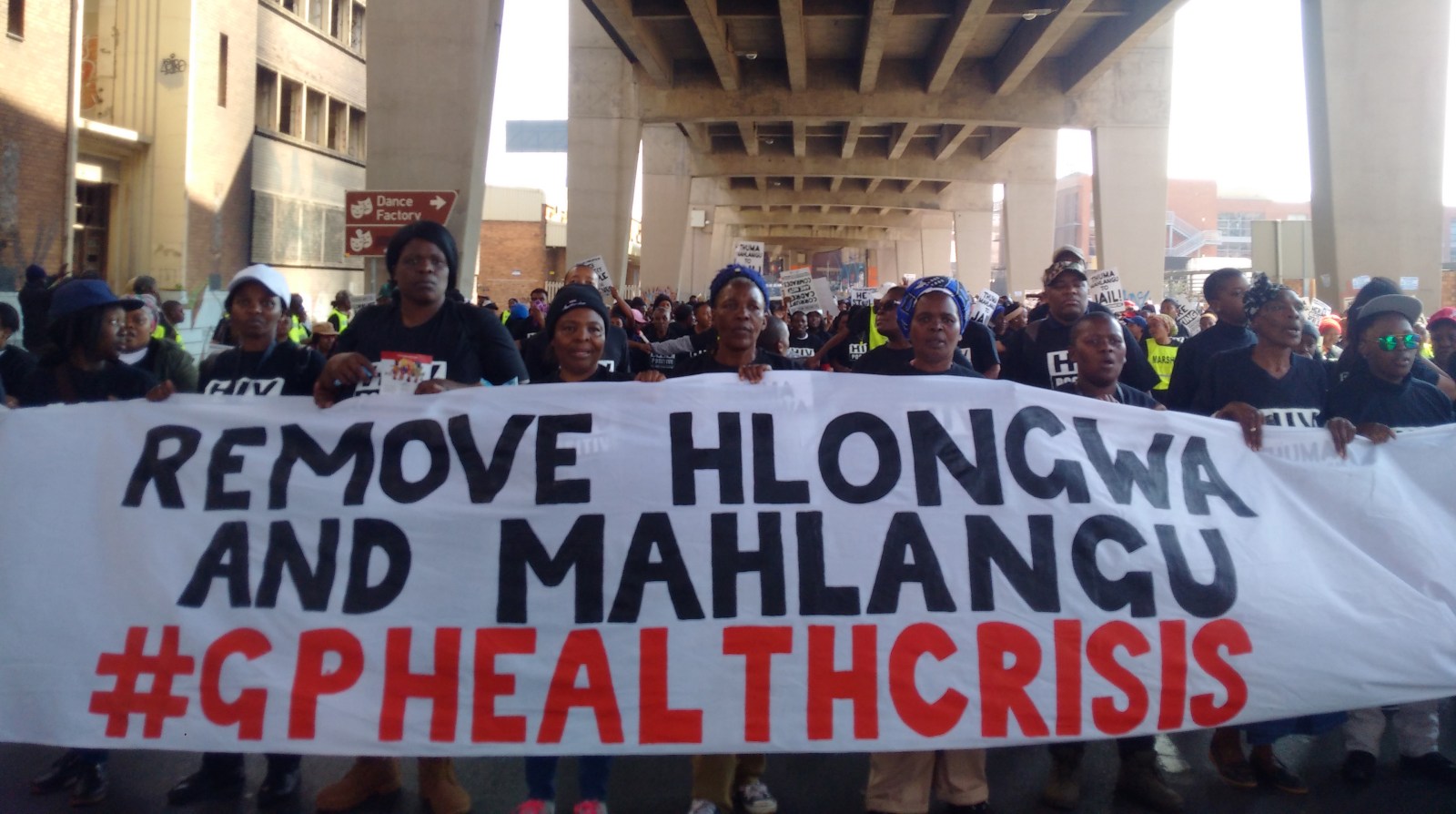 Hundreds of people marched on the Gauteng legislature where the called on the ANC to take action against former Health MECs Brian Hlongwa and Qedani Mhlangu. Photo: Bheki Simelane

On Tuesday lobby groups including the Treatment Action Campaign, SECTION27 and Corruption Watch marched on the Gauteng legislature in Johannesburg to demand the removal of former Gauteng health MECs Brian Hlongwa and Qedani Mahlangu from the ANC’s provincial executive committee. Both stand accused of being partially to blame for the current state of the provincial health department.

One was in charge when nearly 150 psychiatric patients died after they were transferred to inadequately equipped facilities from Life Esidimeni. The other stands accused of facilitating corruption amounting to over R1-billion during his tenure. Both were MECs for health in Gauteng at the time. Now both are facing calls for their removal from their positions within the ANC provincial executive committee.

In 2016, the Gauteng health department ignored advice from families and experts and moved 1,711 mentally ill patients out of Life Esidimeni facilities and into NGOs or community care. In conditions described as torture, 144 patients died; 20 are still missing.

Earlier this year, a Special Investigating Unit report linked former MEC Brian Hlongwa to corruption amounting to R1.2-billion while he was in the position between 2006 and 2009.

Despite these controversies, they were both re-elected to the ANC’s PEC at its recent provincial conference and have yet to face any party disciplinary processes.

On Tuesday hundreds of members from the TAC, SECTION27 and Corruption Watch marched on the Gauteng legislature to call for their heads, saying they should be held to account for their conduct and for being responsible for the precarious financial position that the department finds itself in now.

The department has struggled to pay suppliers, has had its phone lines cut and has had furniture and equipment attached by the sheriff of the court.

“It’s important to show solidarity with the Treatment Action Campaign as a partner and in sympathy with the families of Life Esidimeni patients who lost their lives because of this uncaring government. We demand action from government now to end the rampant corruption in provincial health.”

As the crowd went past the ANC headquarters it was ordered to sit down while the allegations against the officials were cited.

“Down with killers, down. Down with thieves, down,” the crowd shouted as they proceeded past Luthuli House.

“We want the premier or speaker, we don’t want the provincial secretary. When they want our votes they come to us but when we bring up grievances they don’t come to us. That is unacceptable, we’ll sleep here,” one leader said as the crowd waited at the Gauteng provincial legislature under the watchful eye of Johannesburg Metro and South African Police members.

Maria Selena, 54, from Daveyton in Ekurhuleni said corruption and maladministration were affecting services.

“At clinics we sleep on the floor. We are told nurses and doctors are not sufficient… we go to clinics early in the morning to return home in the late afternoon without the necessary medication and treatment,” she said.

The memorandum handed over to Ntombi Mekgwe, speaker of the Gauteng legislature read:

“We demand that they be immediately removed from the ranks of the ANC leadership, and in the case of Brian Hlongwa, as an MPL and ANC Chief Whip in the Gauteng legislature. We demand that there be an urgent turnaround of the collapse of the Gauteng health system. If not, we will hold the premier and the health department accountable for their indifference to the suffering of poor people, for their foot-dragging and empty promises…”

Protesters threatened to withhold their votes if their demands were not met.

The protest was supported by the Freedom Front Plus, the Democratic Alliance, and the Economic Freedom Fighters.

Sibongile Tshabalala, national chairperson of the TAC, expressed her disappointment at Premier David Makhura for not being available to receive the memorandum.

“Makhura always portrays himself as a noble leader but disappears when he has to show leadership. He showed us that the ANC leadership does not listen to the people who voted them to power. You cannot treat us like nobodies. We are here because the ANC keeps thieves in their midst,” Tshabalala said.

“Today the Gauteng Health department is struggling because of Mahlangu, Hlongwa and his friends. We can’t access health services. We are sleeping on floors. Patients sit in health facilities for up to two days. Infrastructure is collapsing daily because the government hired their relatives,” she said.

“We are here because there is no accountability because Hlongwa and Mahlangu still hold high office. We want to keep breaking the consciences of the people in power,” he said. DM