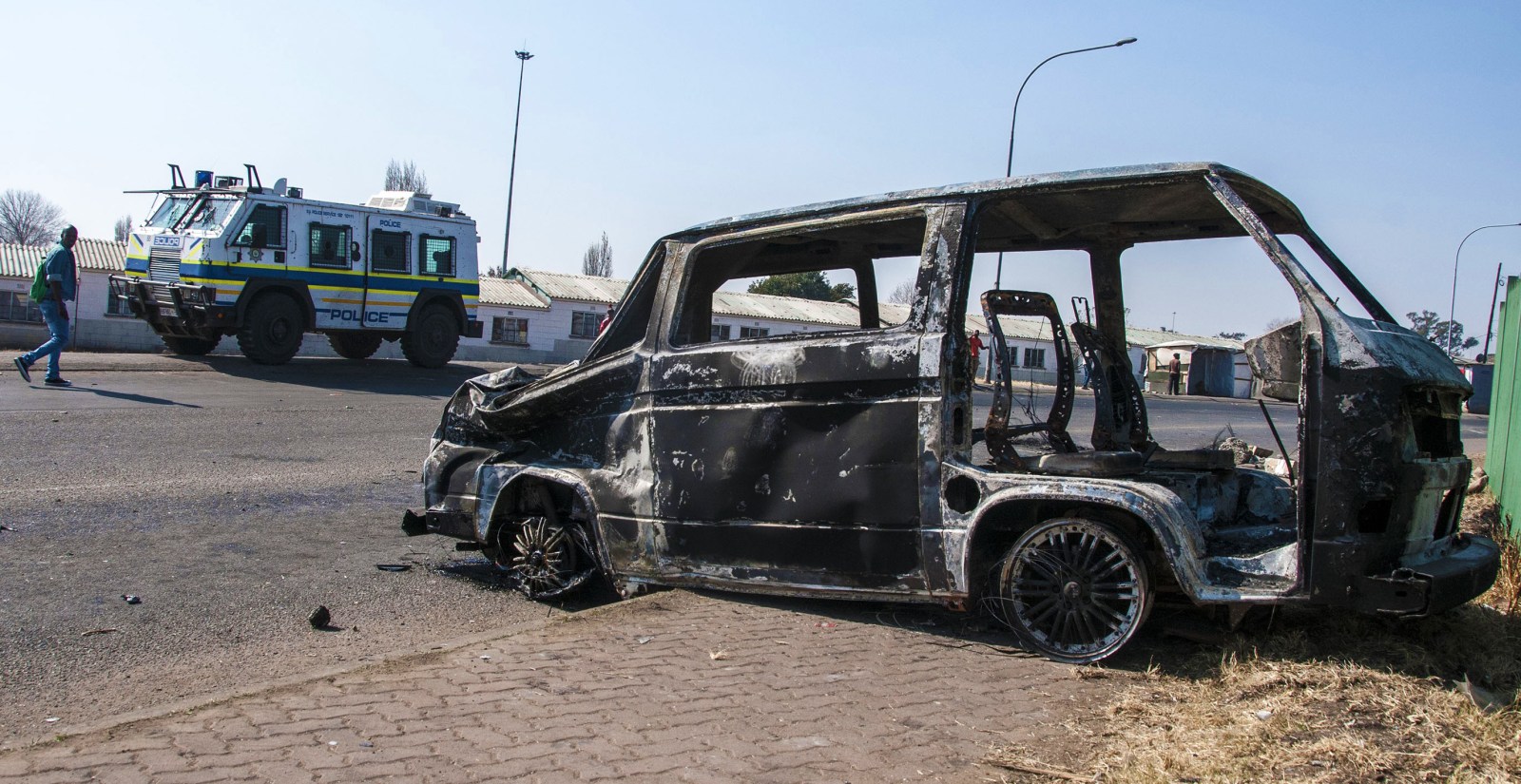 Police monitor the situation as a man walks past a burnt-out wreckage of a taxi allegedly set alight by residents protesting about the lack of electricity near the Nancefield hostel in Soweto on Thursday, 3 July 2014. Picture: Ihsaan Haffejee/SAPA

In South Africa, almost every day brings disruption or outright violence caused by what has come to be known as the taxi industry. For millions of people, using minibus taxis and paying cash upon entry is the easiest, quickest, and usually only way of getting around. But in the last few months it appears that tensions in the industry have increased, resulting in even more deathly violence, the reasons for which have to do both with the internal dynamics within the industry, and with the external context in which it finds itself. The rise of apparent uncontrollable taxi violence may be a symptom of something much bigger playing out in our society: the fact that government cannot actually exert itself.

Thinkers going back at least to 1918, like Max Weber, and people writing more recently (Francis Fukuyama) have stated that one of the conditions of a geographical space being defined as a nation state is whether the government of that state has the monopoly on the use of force. As citizens, we inherently know this; if you commit a crime of violence, the state, in the form of the police, will take away your liberty and exact some form of punishment.

By this measure, the taxi industry is busy testing South Africa’s statehood. It appears to act with impunity, with little or no consequence for the acts of violence committed. Consider the number of times you have heard of people in the industry being killed, generally in a hail of bullets, and how many times you have heard of convictions for taxi violence. So bad is the demand for violence that it is now an industry that literally keeps hitmen in business, just to settle internal scores.

And it is not as if the industry hides its blushes: its members once went on a march to the Tshwane Mayor’s Office demanding that enforcement orders, traffic fines to you and me, be dropped.

And that is before you consider the number of times they have blockaded South African roads. This appears to happen at least twice a month at places around the country. Under the law, it is illegal to blockade a road, and yet instead of enforcing the law, often the police will simply escort the blockaders on their trip around the country’s highways.

(As an aside, it appears that different laws apply here. The Justice Project’s Howard Dembovsky says that in Joburg and Tshwane, which are both AARTO jurisdictions, people can only be fined for blocking a road. In the rest of the country, which is under the Criminal Procedure Act, they can be arrested).

What then does this tell us? Obviously, government, in the form of police, the authorities who allocate routes, and everyone else that is supposed to represent the state, have lost control.

This suggests that there are serious problems with state capacity. For the people who really suffer in all of this, the passengers and the public in general, there must be nothing more frustrating and frightening than going to a taxi rank in the middle of a dispute between taxi associations. And yet they have no choice. Considering the political pressure that this would generate, it would be rational to expect that this could be a priority for governments around the country. And yet, for various reasons, they appear to have no choice but to ride the tiger, rather than tame it.

This could be proof that sometimes he who has more might is simply more right. No one wants to take on an industry which is associated with so much violence. The associations are organised and have the ability to bring entire cities to a halt (according to legend, they once forced even Gwede Mantashe himself to wait out a protest in a police Nyala outside Luthuli House).

At the same time, it must surely be recognised that to attempt to solve the problem by using more force than the taxi industry will simply lead to another Marikana; people would die, and most of them would be innocent. The problem, of course, is that the state lost control of the situation at first gradually, and then suddenly. This did not happen overnight. The taxi industry itself goes back to the 1960s (if you live in Joburg you might have seen bumper stickers bearing the legend “The Faraday Taxi Association 1968”). Even the apartheid government, which did not give a fig for human rights, was unable to stop its rise, and the accumulation of power that went with it.

What then can be done?

The man who allocates routes for taxi associations in Gauteng is the MEC for transport there, Ismail Vadi. In a recent discussion on SAfm he was characteristically thoughtful. His main point was that the entire way in which the taxi industry governs itself needs to change. Instead of the current group of federations, which are really groups of collaborators who travel on the same routes, they should be turned into companies, with CEOs and boards and the whole governance bit that comes with it. This would mean there would be proper structures, and that appointments would be made for longer terms.

At the moment, it appears much of the violence occurs because of leadership issues within these associations. In Cape Town this week the Khayelitsha corridor was closed because of a delay in the holding of a certain regional conference of the SA National Taxi Council. When there is contestation, the potential for violence increases. A proper corporatisation might change things.

In the meantime, provincial governments and municipalities often have to resort to the carrot to get things done. It is surely ridiculous that the implementation of a public transport system in the form of a Bus Rapid Transit system, which will help poor people get to work, can be a controversial issue. And yet, before any BRT systems can be brought online, the local taxi associations have to be consulted. Why? It is a service for poor people, not for them. And yet, such is their power than in the end they have to benefit from the project in some way.

It should also not be forgotten that there is a link between the taxi industry and formal politics. A recent meeting of Santaco saw a proposal that the industry start its own political party being shot down. But that didn’t stop the man in the centre of it trying to hold a meeting to get the ball rolling anyway. There also appears to be a link between the industry and former President Jacob, through his son Edward Zuma. The recent murders linked to politics in KwaZulu-Natal may also have something to do with the supply of hitmen available courtesy of the taxi industry.

This ever-increasing destabilising factor needs to be watched closely. An increase of influence from the taxi industry in our politics is unlikely to have beneficial consequences for the majority of the population.

It is likely that the violence in the industry in the short to medium term will continue. It will only be when the capacity of the state improves, and the industry itself starts to change, that we may see an end to this situation. In the meantime, citizens can only look on, while wide-eyed passengers continue to travel in fear. DM