If government can’t handle title deeds in Alex, what of the country? 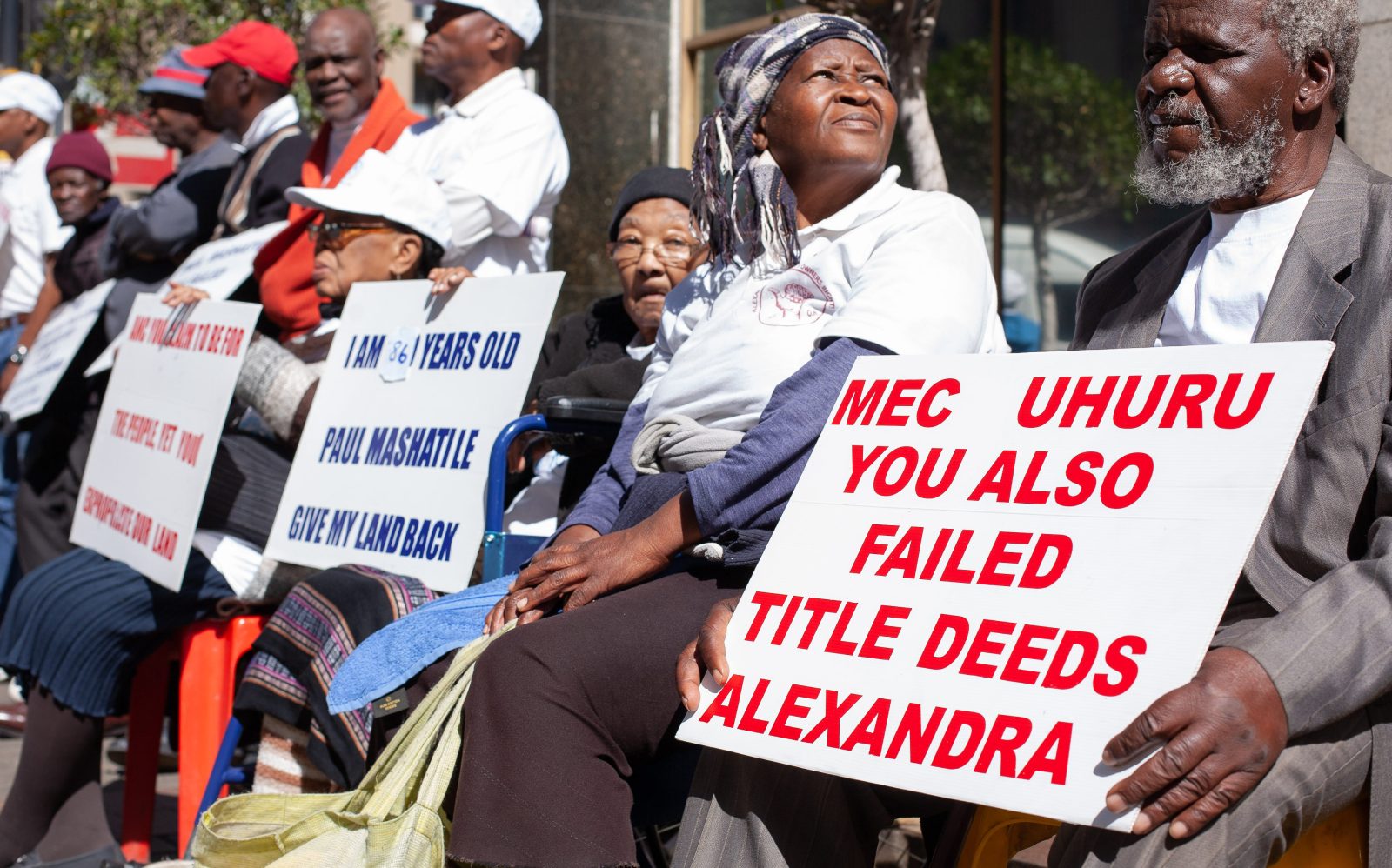 Alexandra landowners protested outside the ANC’s Luthuli House on Monday, accusing the government of failing to honour a land claims deal after their properties were expropriated during apartheid. They questioned whether the party and government are committed to land reform while they can’t resolve the township’s issues.

Ethel Mngomezulu, 71, has lived in Alexandra her whole life. Her parents bought property in the Johannesburg township in 1929.

“We are still waiting for our title deeds today,” she said outside Luthuli House on Monday.

A small group of members from different Alexandra property owners’ associations were protesting outside the ANC’s headquarters demanding the implementation of a 2016 agreement aimed at providing redress for land expropriated during apartheid.

“We are angry. We see clearly now they are not prepared to give us our title deeds,” said Mngomezulu, secretary of Alexandra Property Owners’ Rights (APOR).

While Alexandra was one of the few places where black people could own property during apartheid, the white government implemented forced removals in an attempt to reduce its population. Property was expropriated and residents who had freehold rights became tenants.

In 2005, a court ordered that demolitions and development in Alexandra could not proceed until the former owners received redress. The decision was upheld by the Land Claims Court, limiting work on the Alexander Renewal Project, meant to transform the community.

Many owners received R50,000 in compensation in 2000. They said it was only for their loss of tenure and they continued to fight for their rights to the land or further compensation.

In 2016, the dispute appeared to finally be resolved after owners signed an agreement with both the city and provincial governments. The deal allowed the former owners to choose between getting a title deed for their land, stand or an alternative stand, to participate in the area’s redevelopment, or to financial compensation.

The agreement was expected to cost government up to R2-billion. Most of Alexandra’s more than 2,500 property owners who are entitled to redress are now elderly.

“They didn’t fulfil their promise from the statement of intent,” said Mngomezulu on the 2016 deal.

When it was signed, former Johannesburg mayor Parks Tau praised the agreement.

“These negotiations enabled us to unlock development in Alexandra. The past 20 years have not addressed the issues in Alexandra and it is important to resolve these issues,” he said.

William Volmink, who leads the Concerned Alexandra Property Association (Calexpro), said that “since the [2016] elections, everything fell flat”.

Protesters blamed former Gauteng housing MEC Paul Mashatile, the former ANC Gauteng leader who was elected as party treasurer in December. They said he and his successor Dikgang Uhuru Moiloa failed to implement the deal and had used the owners to help win votes ahead of the municipal elections.

Sam Mahatlane from the Gauteng human settlements department on Monday was quoted as saying:

“We are again going to be meeting with the councillors and thereafter we will call a public meeting in Alexandra and give feedback to the community or those representing the community.”

As the ANC’s Top Six officials met inside Luthuli House on Monday, protesters wanted them to hear their grievances and for President Cyril Ramaphosa to intervene.

“Gone are the days they can sit up there and say everything is hunky-dory when it’s not,” said Volmink.

Johannesburg Mayor Herman Mashaba was also blamed. Volmink claimed the process of implementing the agreement had stalled after Mashaba was elected in 2016. In May, he fired former housing MMC Mzobanzi Ntuli, who chaired the committee working on the plan.

Volmink said it was difficult to schedule meetings with officials in the new city administration, adding that they did not provide responses to queries and were demeaning to residents.

Land reform has become a central issue ahead of the 2019 elections and last week Ramaphosa announced that the ANC would propose a constitutional amendment in Parliament “that outlines more clearly the conditions under which expropriation of land without compensation can be effected”.

The Alexandra protesters were not convinced.

“Now our concern is when we’re dealing with land restitution of the rest of the country. If they can’t deal with one square mile… how will they deal with the country’s issues?” Volmink asked.

Mngonezulu said: “Now we are getting angry because they want to amend Section 25 [of the Constitution] but we still don’t have our title deeds in Alex.”

Owners said they want title deeds so they can develop businesses and have greater control over their properties, added Mngomezulu.

During the 2016 negotiations, Tau assured Alexandra residents they would not be evicted if the land they are living on is transferred into the hands of its past owners.

The protesters were not addressed by anyone from Luthuli House on Monday and Daily Maverick’s queries to the party went unanswered. DM