Thoughts on the death of Professor Bongani Mayosi 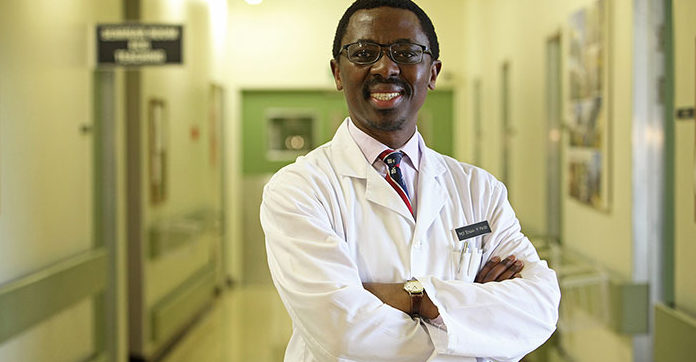 Professor Bongani Mayosi was a widely respected and well-liked scientist. Photo from UCT

We have heard many reflections on Professor Mayosi’s death. None will ever know what happened, and in reflecting, we run the risk of misrepresenting his life. But we would also be remiss if we did not begin to try to imagine what would lead someone to such an extreme act.

All of us in the university and healthcare sphere are looking for ways to make sense of the shocking tragedy of the death of Professor Mayosi, Dean of the UCT Faculty of Health Sciences. A death which, alone, would have shaken the medical and academic world but that has the added pain related to the nature of his death by suicide.

This is a deep pain, especially for those who were close to him but also for those many of us whose lives brushed against his in innumerable ways. Professor Bongani Mayosi was just always there. This larger than life story of a black South African from Nqamakwe in the Amatole district of the Eastern Cape – beating all the odds to become an academic, clinician and university leader. Someone who was also the ordinary and approachable person who walked briskly among us down the corridors of Groote Schuur Hospital.

We have heard many reflections trying to explain Professor Mayosi’s death. Of course, none of us will ever really know what happened, and in reflecting, we run the risk of misrepresenting his life. But we would also be remiss if we did not begin to try to imagine what the many complex and interlinking factors could have been that would lead someone to such an extreme act. I believe that recent narratives laying blame at the door of only one aspect of these complex facets, in particular the student protests of 2016, are narrow and divisive at a time when deep thinking, open feeling and collective healing is necessary.

I will try to reflect on a few aspects of this complexity in a way that I hope contributes to this spirit of openness and healing.

We should consider, I think, the unique role of a brilliant black academic, taking on a leadership role in 2018, in this country, at this university. And in doing so, carrying on his shoulders the weight of the hope and of the unrealised potential of his people, country and continent. Anyone taking on a leadership role in a top university position commits themselves to an enormous workload. Ongoing academic performance, management of complex and opaque bureaucratic structures and support of colleagues, staff and students are just some of those responsibilities.

Now add to this what can be deemed a “black academic tax”. The responsibility for initiating, driving and embodying change. The responsibility of being a beacon and role model, therefore never stumbling, never failing, never showing weakness. The responsibility for supporting individually and collectively, socially and academically the young black students and staff who desperately need a light before them to guide them onwards. This is a privilege yes, but also a massive responsibility. Layer on to this the insidious, covert racism that permeates so many of our university structures, both in the bureaucracy and the academic leadership. This racism that continuously either consciously or unconsciously undermines black leaders so that the pervasive atmosphere is one of constantly proving that you are worthy.

We also should consider the inevitable stress caused by working within a higher education system built within a broader society which is inherently unjust. Where the very entry into university is policed by the politics of class and racial inequality. A fee-paying system which keeps the majority out, a schooling system which disadvantages the majority and a university environment which alienates and marginalises those few who jump through all the hoops to get in.

Professor Mayosi knew of these injustices and opposed them. I wonder what intense inner conflict must have been unleashed when these injustices were made so starkly visible by the student protest movements of the last few years. The occupation of the Health Sciences deanery in 2016 marks, for me, a transformative moment in our history as a faculty. Seldom have I seen political protest unfold so spontaneously, so respectfully, so democratically, so beautifully as that particular protest did.

Having been lucky enough to be present in a few of those moments, I cannot recall an instance where Bongani Mayosi, the man, was disrespected, called names or denigrated in any way, though of course there may have been isolated instances of this. What I rather saw was principled political action to hold accountable the representatives of the structures of power in a flawed system. These struggles could also be viewed as an important social counter pressure assisting a dean, newly in his position, to shift the conservativism of the university towards his stated aims of building an institution that was more just, more open, more home to all of us.

Yes, these political times of contestation were stressful for all of us. What we need to ask is what is wrong with an institution where a black academic taking a position of leadership has to ask whether they can marry their principles of justice and antiracism with this leadership role? What kind of institution creates such an intense polarisation such that you have to choose to be on the side of justice, the side of the picket line, or on the side of the institution, the system, the “board” and defend all it stands for?

What kind of conditions within an institution makes it necessary that we place our best and brightest into these crucibles of intense pressure at the interface of power because there is a need to struggle on all fronts, including within the corridors of power?

And then, finally, though this does not nearly exhaust the list of factors, I think we need to look at the nature of our clinical and academic work itself. The fact that Professor Mayosi’s job required that he be in the office before dawn and stay late into the night and work weekends and many hours in between is not something we should be proud of; it is something we must examine. Because responsible, caring people will always push themselves to the limit to complete the work that must be done. The failing is in the institution that requires this unhealthy work ethic in order to “perform”.

Much has been written about the long, stressful hours worked by clinicians and the strain of sleep deprivation and feelings of inadequacy in the face of the health system’s failures. In the Faculty of Health Sciences, this unique clinical context is coupled with the harsh, competitive climate of the academic institution. An academic institution that has become corporatized so that only hard, measurable outcomes such as publications, degrees and completed dissertations are prized, expected and pushed for. Without consideration of the actual time required to complete this work or of all the other kinds of unseen, necessary work required in a learning space such as building relationships, supporting students and colleagues and quiet thinking and reflection which cannot be measured.

If we look at the academics in our faculty, balance, self-care and downtime is a myth. It simply does not exist. How does this type of university and hospital working environment impact on the problems of stress, depression and anxiety?

So, of course, I must say once again that this is all speculation and we will never really know. But I think we are in a time of reflection and speculation. I hope that part of what comes out of this tragedy is an analysis of the many layers and many factors that may have contributed to Professor Mayosi’s untimely death.

Lydia Cairncross is a doctor in the Department of Surgery at Groote Schuur and the University of Cape Town. She is an activist for free, decolonised education and for equitable, quality health care for all. This note written in her private capacity.