Zimbabwe elections to proceed despite claims of rigged electoral process 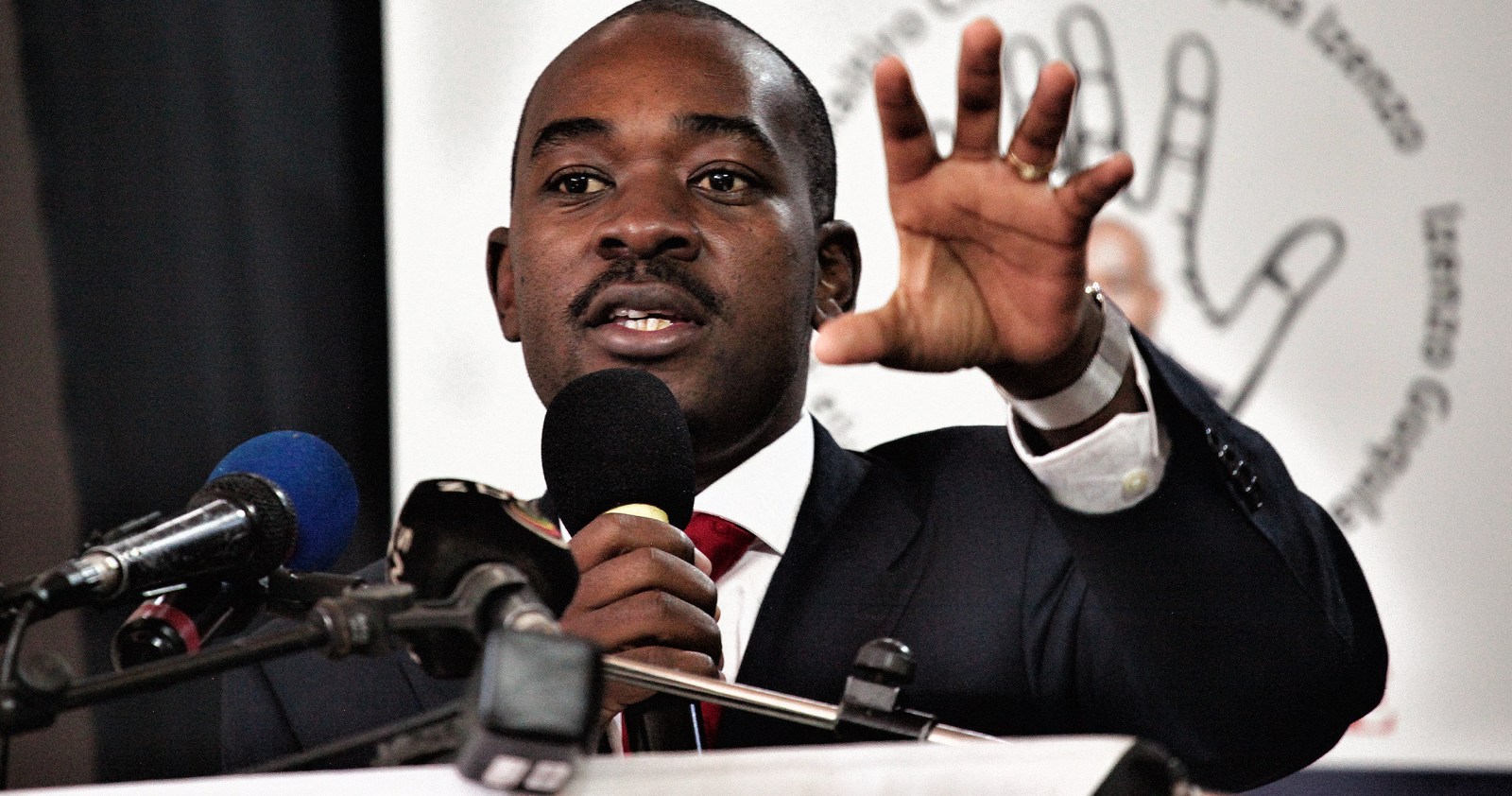 The president of the Movement for Democratic Change (MDC) alliance, Nelson Chamisa, delivers his keynote address at the launch of the party's 2018 election manifesto in Harare, Zimbabwe, 07 November 2018. The manifesto launch comes ahead of the country's elections to be held on 30 July 2018. EPA-EFE/AARON UFUMELI

The MDC Alliance, a grouping of seven political parties which came together to wrest power from Zanu-PF, has been on the Zimbabwean electoral body’s case, accusing it of attempting to manipulate the country’s July 30 elections in favour of the ruling party. MDC Alliance candidate for president, Nelson Chamisa informed the world that his party is not going to boycott the elections slated for Monday next week.

As Zimbabwe’s harmonised elections draw nearer, concerns by Nelson Chamisa’s opposition MDC Alliance about the voter’s roll and printing of the ballot papers have been shut down. Zimbabwe Electoral Commission (ZEC) chairperson Justice Priscilla Chigumba has advised parties to lodge their complaints after the elections.

Last week, Chamisa held a press conference at the party’s headquarters in Harare where he reiterated that the electoral commission could no longer to be trusted with running the elections, proposing instead that the African Union and the SADC should intervene to ensure a level playing field.

The MDC Alliance, a grouping of seven political parties which came together to wrest power from Zanu-PF, has been on the electoral body’s case, accusing it of attempting to manipulate elections in favour of the ruling party.

“Whether the candidates scrutinise the voters’ roll, whether they see any anomalies in it, whatever the anomalies are, whatever legal recourse they have will not stop an election. I want that to be very clear, nothing stops the election.”

The MDC Alliance has accused ZEC of not being impartial but of instead promoting the interests of the ruling party.

“We have a referee that has decided to throw away the whistle and join another party, particularly Emmerson Mnangagwa’s team, that is why he (Mnangagwa) is not complaining because ZEC is playing for him,” Chamisa said.

Chamisa has set the record straight that his party is not going to boycott the elections slated for Monday next week.

The Zimbabwe Republic Police (ZRP) this Tuesday, just six days before election day, turned down an application by the opposition grouping to hold a series of demonstration vigils against the ZEC at its offices in Harare.

Analysts had warned the planned vigil could heighten tensions and could lead to violent clashes as Zanu-PF could be tempted to protect their turf.

President Emmerson Mnangagwa, who is the Zanu-PF presidential candidate, said at the weekend that the ZEC was a professional and independent body over which neither the government nor the ruling party had control, adding those aggrieved by the electoral body should approach the courts instead of throwing insults.

This came after a delegation of Elders, a group of independent global leaders founded by the late Nelson Mandela, which was in the country to support the holding of free, fair and credible elections, warned against inflammatory speeches by political leaders as they would lead to violence and unrest.

“I am urging political parties to watch the language they use. We can disagree without insulting each other,” former United Nations Secretary-General Kofi Annan said.

“Women constitute more than two million registered voters, yet the number of women candidates continues to go down. Most female candidates are being attacked on social media, we hope that this is going to change,” Robinson said.

In a recent attack, Chigumba was accused of having an affair with a cabinet minister.

However, Chamisa told journalists at a press briefing in Harare on Wednesday that people should not attack Justice Chigumba or look at her personal or private life, but rather focus on the issues at hand.

“Let us protect our women in position of authority, let us not undermine or abuse them. It’s very important to see more women in positions of leadership,” Chamisa said during the press conference held at Morgan Tsvangirai House.

Speaking to journalists on Wednesday, African Union Election Observation Mission head Hailemariam Desalegn said that parties should follow legal frameworks. “Any grievances have to be presented according to the legal frameworks and processes that have been put in place,” Desalegne said.

According to the Zimbabwe Council of Churches 2018 survey Prospects for Democratic Transition in Zimbabwe, the majority of Zimbabweans have low levels of confidence in the electoral management body and the government.

According to the survey, conducted early in June, this has a bearing on how the electorate perceive the overall electoral climate and political environment. Although Mnangagwa has assured people of his and government’s commitment to free, fair and credible elections, ordinary citizens were shown to doubt the sincerity.

This year’s election period has been commended for being relatively peaceful compared to previous election run-ups but contestations around the whole electoral process by the MDC Alliance remain a major threat to the peaceful conduct of the elections. DM