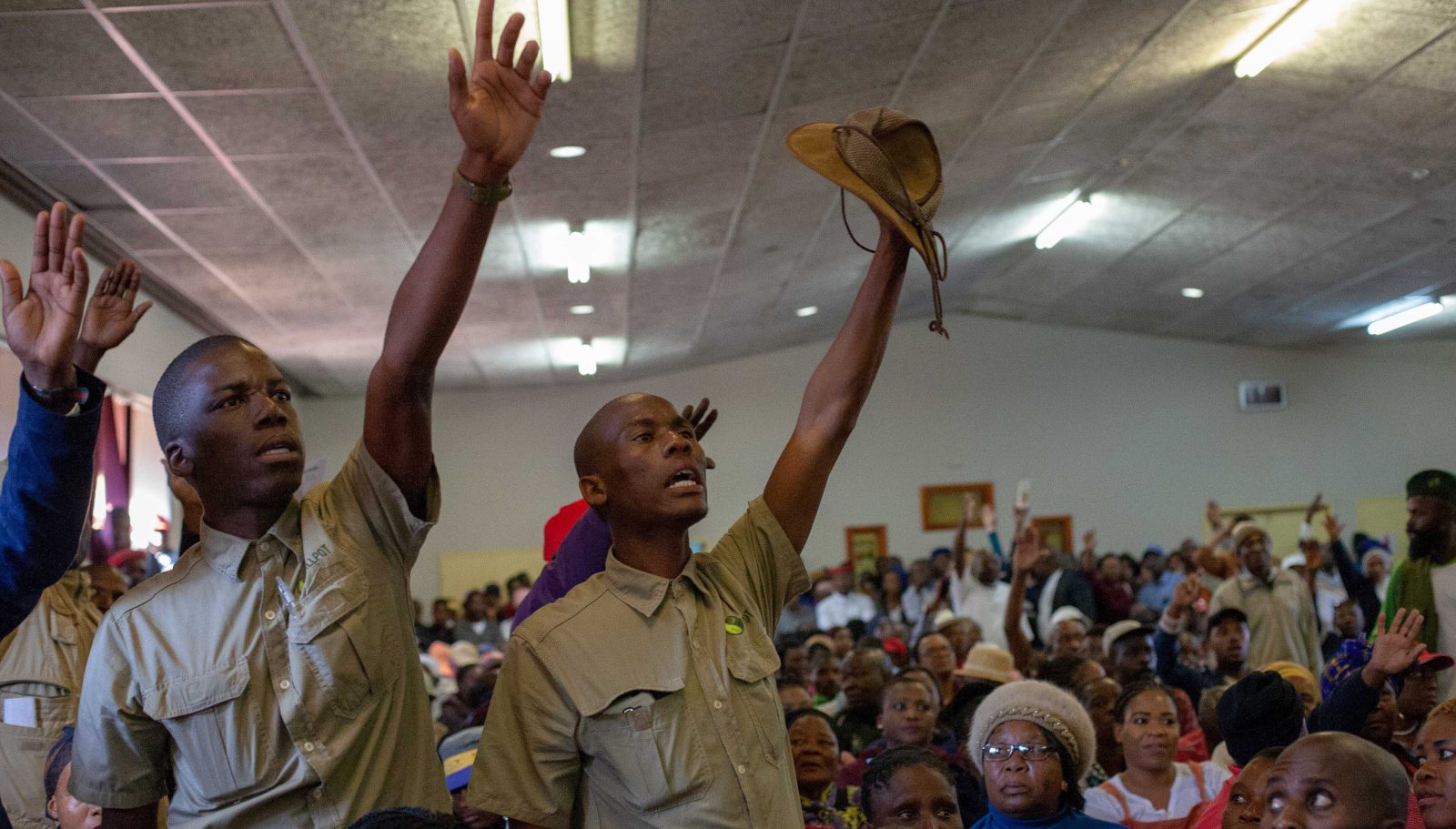 Young black farmers raise their hands to speak on the first day of Limpopo’s hearings into whether Section 25 of the Constitution should be amended. (Greg Nicolson)

Public participation spaces to which the legislative sector “invites” citizens are not always accessible to those concerned, nor effective. But there are a variety of ways in which citizens can make themselves heard.

A good example of how the public can get involved in the work of the legislature will be when Parliament invites public inputs on South Africa’s Climate Change Bill, which the Department of Environmental Affairs (DEA) is currently working on. Over the past month, the department has held provincial consultations with the public and invited submissions on the draft legislation by 8 August to inform a revised version of the document. This illustrates another way in which citizens can take part in shaping key legislation.

This “how-to guide” is an overview of how to be an active citizen for responsive legislatures, by participating in the different stages of the parliamentary cycle. These are described in more detail in a newly released Action 24 booklet.

The parliamentary programme reserves specific time for that: every Monday when Parliament is in session, and during constituency periods – several weeks during the year reserved for elected representatives to concentrate on constituency work. During these periods the representatives make themselves available to the public, help solve problems, and report back to their constituents on what is happening in the legislature.

The parties represented in the legislatures receive an allowance to run Parliamentary Constituency Offices to facilitate interaction between elected representatives and their constituencies. It is estimated that there are about 350 of these throughout the country. Despite this, very few of us know these structures even exist, and the information about their location and the members assigned to each of them is scarce, although these offices are funded by the public purse.

Back in 1969, Sherry R. Arnstein warned that “there is a critical difference between going through the empty ritual of participation and having the real power needed to affect the outcome of the process”. As a matter of fact, these public participation spaces to which the legislative sector “invites” us are not always accessible to those concerned, nor effective. Protests like the ones that took place in the North West province in April this year are a clear manifestation of the frustration of not being heard. There are multiple forms of “invented” public participation through which citizens attempt to set the agenda, fortunately not always in a violent fashion. They contribute to tilt the balance of power closer to the people when institutional processes are failing.

In its own adaptation of Arnstein’s “ladder of citizen participation”, the South African Legislature promotes a “best fit approach” that ranges from information to consultation, involvement, and ultimately, collaboration. With each level comes increased opportunities for public input to influence or impact the decision-making process, with collaboration being the most participatory form of governance. In this approach, the level of public participation processes is determined based on the level of public interest. 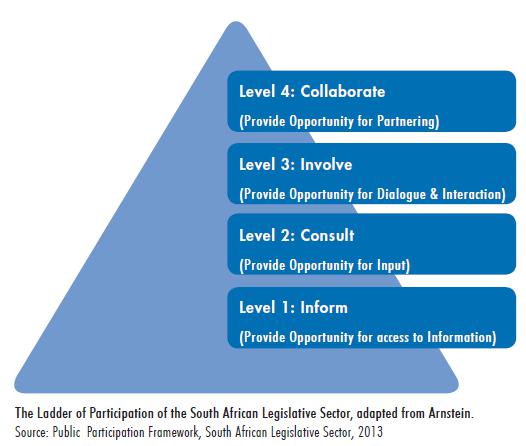 The Constitution and several Constitutional Court rulings spell out what is required to ensure that public participation in the legislative and oversight processes is indeed meaningful, effective and inclusive. One of the key criteria is that consultations should include the groups who may be affected by the decisions/actions under consideration, and they must be consulted before a final decision has been made. Also, the public must be informed in a language that they understand and can engage in, and given enough time to prepare for consultations.

It is our responsibility, as citizens, to check the quality of the participation platforms, and the extent to which the information publicly available actually empowers the people to be involved. It is also our duty to be active citizens and take part in the decisions that affect the future of our society. “The little grassroots people can change this world,” said the late Wangari Maathai, “We have a responsibility to protect the rights of generations, of all species, that cannot speak for themselves today. The global challenge of climate change requires that we ask no less of our leaders, or ourselves.” DM

With a background in political science and human rights advocacy, Noelle Garcin has been working with the African Climate Reality Project since 2016 on growing the mobilisation in Africa to tackle climate change.