Ramaphosa returns to South Africa with 20 billion reasons to feel better, but back home is where his real problems still are 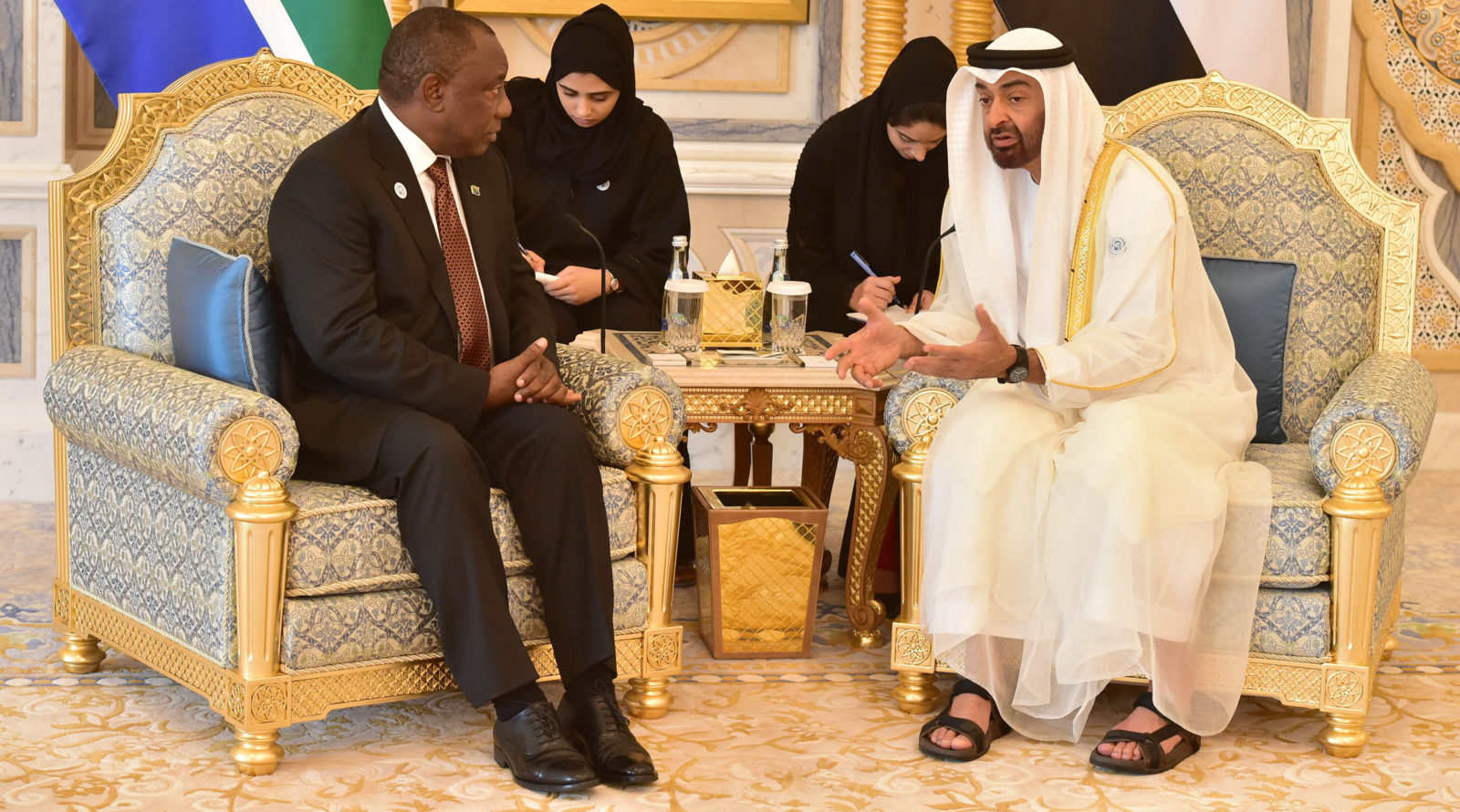 President Cyril Ramaphosa may have returned from a three day-three country trip strengthened by his reception abroad, and armed with an investment commitment of $20-billion, but he is not unaware of the challenges he faces at home. He knows that his response to unravelling party politics makes him appear weak but insists that he is painstakingly forging unity – a mission is not ready to give up on.

President Cyril Ramaphosa has so far gained a reputation among world leaders of being a charmer who hits the right notes, but within the ANC there is growing frustration that he plays it too safe and allows his detractors the upper hand. In an interview following a trip to Abuja, Jeddah and Abu Dhabi, Ramaphosa conceded that he understood why people may be labelling him as a weak ANC leader but was firm in saying that he was committed to uniting the ANC.

The frustration about Ramaphosa’s dealing with internal party dynamics is largely held by his supporters who lobbied to have him elected president of the ANC in December 2017. There is a growing frustration that Ramaphosa tiptoes around party issues and gives in more than he asserts his authority. They cite how he dealt with ANC North West Chairperson Supra Mahumapelo, who may have been removed as premier but still holds massive power in his native province, as well his non-response to political upheaval in KwaZulu-Natal.

But Ramaphosa has a comeback:

“I would rather be seen as a weak president than split the ANC because that is not my mission. My mission is to keep the ANC united and I intend to succeed in having the ANC united.”

When asked why he doesn’t deal with dissidents in the party, Ramaphosa responded:

“I am the president of the ANC, I am not a dictator of the ANC.”

He went on to explain that he is not about to relinquish the mandate he received from party members to unite the party. He also acknowledged that his walking on eggshells in the ANC was deliberate and calculated. He later added a “bring it on” to threats by his detractors to remove him from office before his term is up, through a National General Council.

When it comes to party politics, Ramaphosa appears to be committed to “Mandela-politics” – where being an embracing figurehead is more important than being a muscle-flexing leader. That approach has as equal a chance of failing as it does of succeeding.

On the international front, however, he is more direct in his pursuit of attracting investment for South Africa. Ramaphosa knows that besides his internal party woes, his biggest Achilles’ heel would be low- or no-growth at a time when people have vested their hopes in him and his leadership. Which is why he is aggressive in his quest to find investment.

“We are in this and not playing around. We are serious. This is about the growth of our economy and we are extremely serious about being businesslike,” he said.

Ramaphosa first visited Abuja, Nigeria, on Wednesday where he met with President Muhammadu Buhari – a visit aimed at cooling persisting tension with the West African country. The tension was evident when Ramaphosa was asked twice about the purported killing of Nigerians in South Africa – a narrative sowed among Nigerian politicians and amplified by the local media.

Ramaphosa was at first diplomatic but later attempted to be firm in his response that there was no truth to the view that Nigerians were the victims of killings in South Africa.

“I want to state here and now that South Africans do not have any form of negative disposition or hatred towards Nigerians, and in the main, Nigerians and South Africans and a number of our places in our country live side-by-side,” he said.

Pretoria and Abuja have had a history of tension since President Olusegun Obasanjo left office in 2007. A lot of it goes back to the competition that comes with being the two biggest economies in Africa. The relationship between former presidents Jacob Zuma and Goodluck Jonathan was strained, but since Buhari’s election and subsequently Ramaphosa’s ascension to office, there is some hope of a renewed relationship.

While Ramaphosa’s visit to Abuja may be seen as South Africa grovelling to Nigeria, a senior South African diplomat argued that the two countries will always need each other. Ramaphosa tried to push Nigeria into signing the African Continental Free Trade Agreement which was signed by 44 African countries earlier. When asked about this following his talks with Ramaphosa, Buhari didn’t give any commitments. He said:

“In trying to guarantee employment, goods and services in our country, we have to be careful with agreements that will compete, maybe successfully, against our upcoming industries… I am a slow reader, maybe because I was an ex-soldier. I didn’t read it fast enough before my officials saw that it was all right for signature. I kept it on my table. I will soon sign it.”

Ramaphosa then moved on to Jeddah, Saudi Arabia, for a state visit. While his meeting with Saudi King Salman seemed ceremonial, it was his meeting with crown prince Mohammed bin Salman that really mattered. Saudi Arabia committed $10-billion in investment into South Africa – primarily in the energy and power generation sector. At the same time, Energy Minister Jeff Radebe oversaw a R12-billion deal between South Africa’s Central Energy Fund and Saudi energy companies that would see them investing in wind and solar power.

It was clear in Jeddah that there was some unhappiness that deals struck under the Zuma era were not honoured, but the optimism around Ramaphosa’s election was manifest. Saudi minister of commerce Majid bin Abdullah Al Qasabi told the Saudi business delegation that they trusted Ramaphosa because he was a successful businessman and lawyer – something that seemed to bolster his profile, in the Arab world at least.

During the talks with the Crown Prince, Ramaphosa said they had discussions around the oil price, with Saudi committing to produce more oil to stabilise the price of oil. South Africa imports 47% of its oil from Saudi Arabia and high oil price is affecting the never-before-seen costs of fuel in South Africa.

In the interview with journalists at the end of his trip, Ramaphosa noted that as much as they raised a concern about the high oil price, very little might change. For the Saudis, their entire economy is premised on oil and the only commitment they were willing to make was that they will hopefully produce more oil to increase supply to the market and, as a result, the oil price may stabilise.

Ramaphosa knows that lowering the cost of oil won’t take one conversation.

“Their economy is driven by oil. And we must understand that… and it will have an impact on us,” he said.

For the president, lowering taxes associated with the petrol price may not be the best option because this will negatively impact an already strained national budget. The only solution he offered was that he hoped the rand strengthened to the dollar in the short term.

The Saudis seem to be one step ahead of South Africa, promising to invest in an oil refinery in South Africa. In 2017, then minister of energy Mmamoloko Kubayi told Parliament that South Africa was looking to the Middle East for an investor in an oil refinery on the East Coast and that would include Iran. While SA imports close to half of its oil from Saudi Arabia, that amount may decrease if efforts to begin importing from Iran again – since the lifting of sanctions – are successful. This means the fight between Iran and Saudi Arabia may spill over in South Africa’s economic relations between the two countries. By investing in a refinery, the Saudis will ensure a reliance on their oil supply in the long run and, more so, seek to exclude their rivals, Iran, from the South African market.

As a businessman accompanying Ramaphosa noted: no investment is altruistic. It is always about the profits. And even if Ramaphosa may be saying the right things and appealing to investors and foreign leaders, if the viability of the investments are not guaranteed, the $10-billion investment commitment would be a pipe dream.

Ramaphosa left Jeddah for Abu Dhabi on Friday where he met with Crown prince Mohammed bin Zayed. In this meeting, the Emiratis committed to match the Saudi’s $10-billion investment promise in South Africa in the short term alone. They were less specific about what sector that investment would be in, with Ramaphosa saying his ministers would finalise that. In a business forum after the meeting with the crown prince, it seemed the United Arab Emirates was intrigued by South Africa’s tourism market and willing to invest in it.

And so Ramaphosa returned home with $20-billion investment commitment which is widely lauded as a positive step towards achieving his goal of $100-billion dollars in investment in the next five years. He said he would’ve wanted to come home with more but is satisfied for now with the commitment.

Ramaphosa spoke highly of his meetings with the two crown princes, saying they were actually economists who could rattle off figures for every sector. This businessman-like approach to politics is what intrigues Ramaphosa about these leaders and perhaps it’s what drew their attention to him.

Ramaphosa may be emboldened on the international front, with his charm offensive working on his three-country trip. But back home is where his problems lay. Ramaphosa seems committed to his patient process of uniting the ANC as well as his ambition to grow the South African economy – it may be that one would have to give. Factional party fights often overtake the noblest of intentions. DM