SA’s elections are a chance to advance gender equality 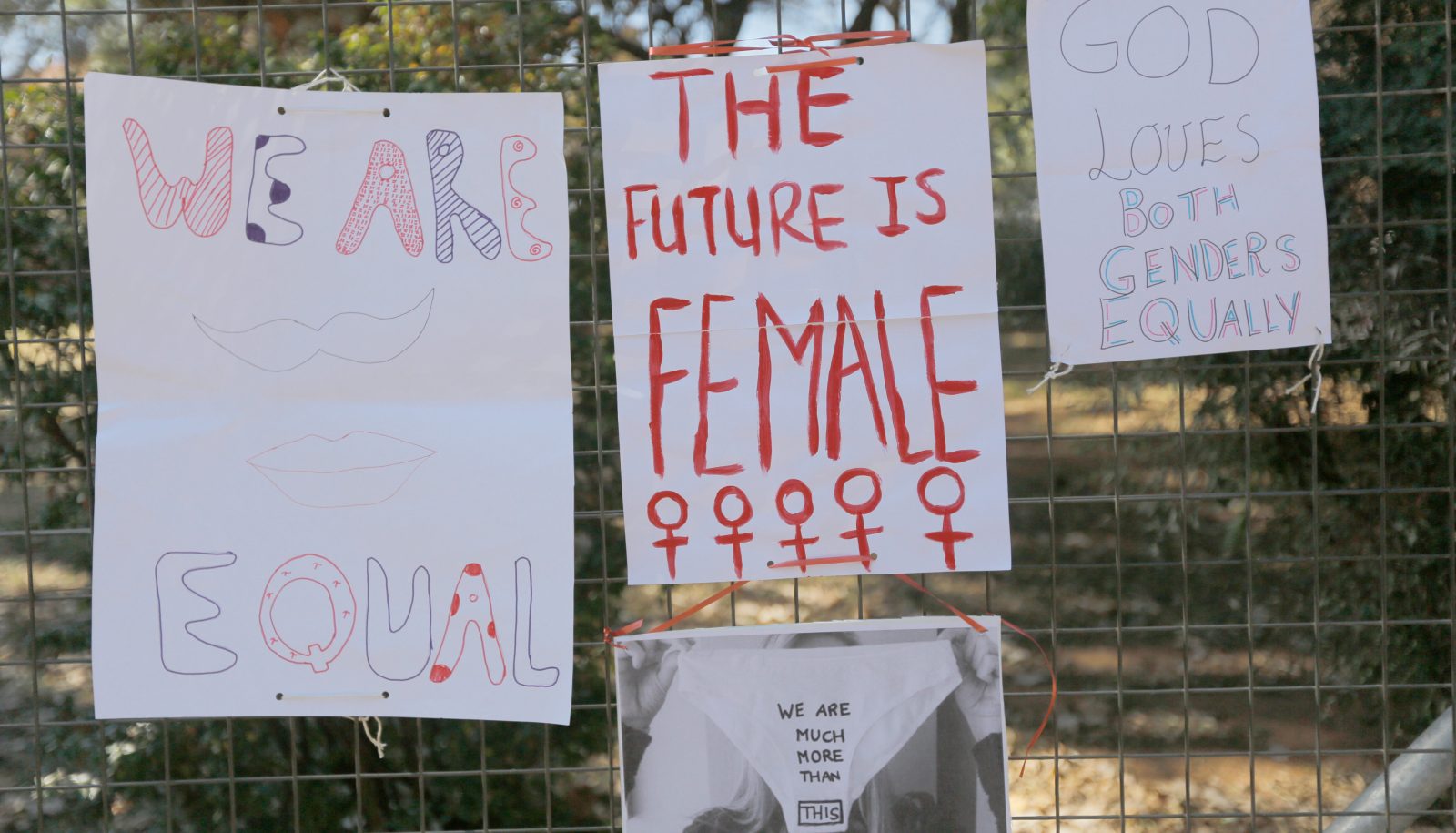 Posters written by girls from Parktown Girls High are seen hanging outside their school as part of a protest to highlight women's rights in Johannesburg, South Africa, 01 June 2017. EPA/KIM LUDBROOK

Young South Africans must insist that political parties prioritise gender equality ahead of the 2019 polls.

With less than a year to go before South Africa’s 2019 national elections, young people should take the opportunity to profile the issue of gender inequality.

Following its first voter registration weekend in March, the Electoral Commission of South Africa announced that over 400,000 (82%) of all new registrations were under the age of 30. Of these, approximately 54% were young women.

However, women – and especially young women – are still at the periphery when it comes to real economic and political power. As South Africa’s political parties begin their election campaigning, young women and men should demand that all parties prioritise their commitment to gender inequality. Until this is done, South Africa will not be able to address its core development challenges of poverty, unemployment and inequality.

According to the last national census by Statistics South Africa (Stats SA) in 2011, women account for just over half (51.7%) of the total population. Women also make up the bulk of the voting electorate.

These figures highlight how painfully slow women’s political representation is moving in a country that is considered to be the torch bearer for gender equality in the southern African region.

Gender equality is enshrined in the South African Constitution. The country also has a number of laws in place to protect the rights of women and girls. Yet 24 years into democracy, women in South Africa are still facing an uphill battle and have to compete with their male counterparts, particularly in the workplace.

Economic empowerment remains one of the most crucial factors to achieving gender equality. In the latest Quarterly Labour Force Survey (QLFS) released by Stats SA, South Africa’s unemployment rate dropped to 26.7% in the fourth quarter of 2017 from 27.7% in the previous third quarter.

The slight decline is encouraging, but the QLFS highlighted that women, and particularly young women, are still more likely than men to be unemployed. In addition, despite women making up most of the population, they are still substantially under-represented in positions of power and authority.

According to the second quarter 2017 QLFS, women fill 44% of all skilled posts in the country. These include managers, professionals and technicians. This figure has not shifted since 2002.

At a political level, leadership positions in each of South Africa’s top three political parties are all still dominated by men. Both the African National Congress top six and the Democratic Alliance top eight boast only one female respectively. The EFF (Economic Freedom Fighters) don’t fare much better, with only two of the six top leadership positions held by women.

South Africa has made some progress in its efforts to promote gender equality. But these figures demonstrate that a lot more work is needed particularly around the attitudes, norms and systems that entrench inequality in the country.

To understand the gendered nature of young people’s political participation in the lead-up to the 2019 elections, the Institute for Security Studies has conducted interviews and focus group discussions with young people in six Gauteng communities identified as protest hotspots. Early indications are that gender issues are at the forefront of some young people’s concerns.

A 19-year-old woman from Meadowlands in Johannesburg said when asked about the roles that men and women play in society: “There is still inequality between men and women. I still feel that there is no woman power. Whenever a woman speaks, it is not going to be the same as when a man speaks … she’s not heard in the same way.”

A 20-year-old man responded with concern: “Women are not being taken seriously due to being female. If we had a female president, things would be different; maybe then women would be recognised.”

These comments indicate that young people are recognising the role that gender dynamics play in their daily lives. They also highlight the responsibility that both young men and young women have in breaking the harmful cultural norms and systems that entrench gender inequality.

As the country moves towards the 2019 elections, young people can help ensure that gender equity is prioritised by political parties. This will provide young men and women with the opportunity for meaningful participation in the polls, and a platform to champion the issues that hinder young women’s political and economic engagement.

Young women and men globally are snubbing power dynamics and gender inequality in the workplace, as seen with the Harvey Weinstein scandal and the #MeToo campaign. They are liberating themselves through politics and economic empowerment.

It is up to young South Africans to follow suit and force gender equality onto the agenda of all political parties. DM

Lauren Tracey-Temba is a researcher and Miche Roberts is an intern, Justice and Violence Prevention, ISS Pretoria