The question defined, now it’s time to get tense 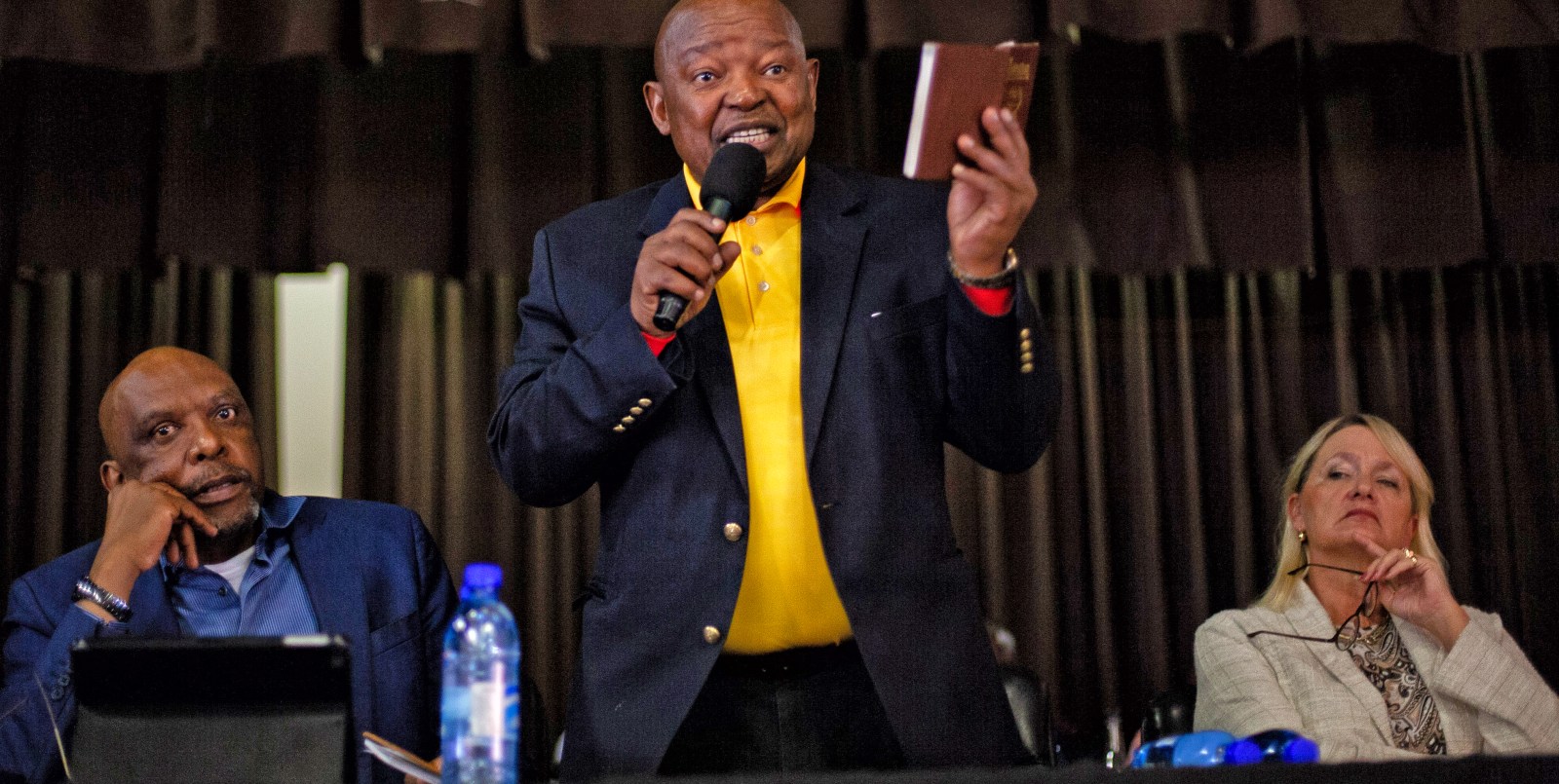 COPE leader Mosiuoa Lekota holds a copy of the Constitution while trying to address the hearings into changing Section 25 in Mokopane, Limpopo. (Greg Nicolson)

As the parliamentary hearings to review Section 25 of the Constitution entered their second day in Limpopo, the Joint Constitutional Review Committee met a people desperate for land and farmers who agree that although restitution is important, they don’t want expropriation without compensation and are distrustful of the government’s ability to deliver.

When Vincent Smith, chairperson of Parliament’s Section 25 Review Committee, opened the land hearings at Aboo-A-Taob Hall in Mokopane, Limpopo, on Thursday, there arose a brief scuffle on the nature of the question: Should Section 25 of the Constitution be amended to allow the state to expropriate land in the public interest without compensation?

The committee had observed from the previous day’s hearing in Marble Hall, in the Sekhukhune District, that the oral submissions made were not addressing the said question. Rather, community members were using the platform to air their many and varied grievances.

The relevant section was read in both Sepedi and English. And the meeting began.

COPE leader and committee member, Mosiuoa Lekota, quickly rose to address the community as a member of the Joint Constitutional Review Committee.

“The Constitution already allows for expropriation without compensation as it is,” said Lekota.

He was met with a roaring crowd not willing to give him an ear. The COPE leader was asked to take his seat so that the proceedings could begin. A member of the EFF in the audience shouted that Lekota is a “sell-out” and scared about his grape farms in Cape Town. (He has told Farmer’s Weekly he owns shares in a Free State wine farm.)

Early on, there was a tense mood in the hall on Thursday as more people opposed to reforming the Constitution turned up, in contrast to the Marble Hall hearings. The large majority, however, argued for the amendment and later in the day many of the speakers appeared to be EFF supporters.

A resident of Mokopane, an elderly man who did not give his name, told the committee that people who have been “previously advantaged” are now scared.

“We are not going away. We are saying let’s share,” said the man.

“Black people’s dignity must be restored through the land. We are ready to die for the land.”

Dorries Masemola, from ward 10 in Polokwane, wanted the Constitution to be amended for land to be expropriated without compensation and divided equally to all people. For Masemola, this will allow black people to have their own farms and work for themselves instead of working for white people.

Morné Mostert, representing AfriForum, asked that the state be truthful when it declares the reasons why it wants the land to be expropriated without compensation. According to Mostert, there are less restrictive means to achieve empowerment. Based on AfriForum stats, Mostert said that 42.6% of the land in Limpopo already belongs to the state.

Those against amending the Constitution argued that taking someone’s land without paying for is an extreme measure which will collapse the economy and limit municipalities’ ability to deliver services.

According to Thomas Ramaloko, a cattle breeder from Limpopo and member of the SACP, before taking any decision it is important to review the history of land reform in South Africa and the many warnings given by judges.

Ramaloko cited a paper written by Ruth Hall, a professor at the University of the Western Cape, titled the Land Question in South Africa, as an excellent account on the complex history of land reform and the different strategies that have been used before and their shortcomings.

“I am a beneficiary of redistribution but it is very hard if you do not have capital and the necessary skills to run a farm. You give most people a piece of land and they sell it,” said Ramaloko.

Dirk Bellstedt, an executive member of the Red Meat Producers Organisation, warned the committee of the risk to food security. He argued against the amending of the Constitution and said property rights are essential to the economic stabilisation of the country.

Because the government did not hand over title deeds to black people, they could not get loans for their capital on their farms, he said.

“Expropriating must happen at a quicker rate. And land must be given to those who lawfully claim it and need to get it,” said Bellstedt.

The land hearing for oral submission continues on to its third day in Limpopo in Tzaneen on Friday. In Northern Cape, the hearings will continue in Kuruman. DM