Limpopo: Vincent Smith calls for the first 10 speakers and dozens of hands shoot up 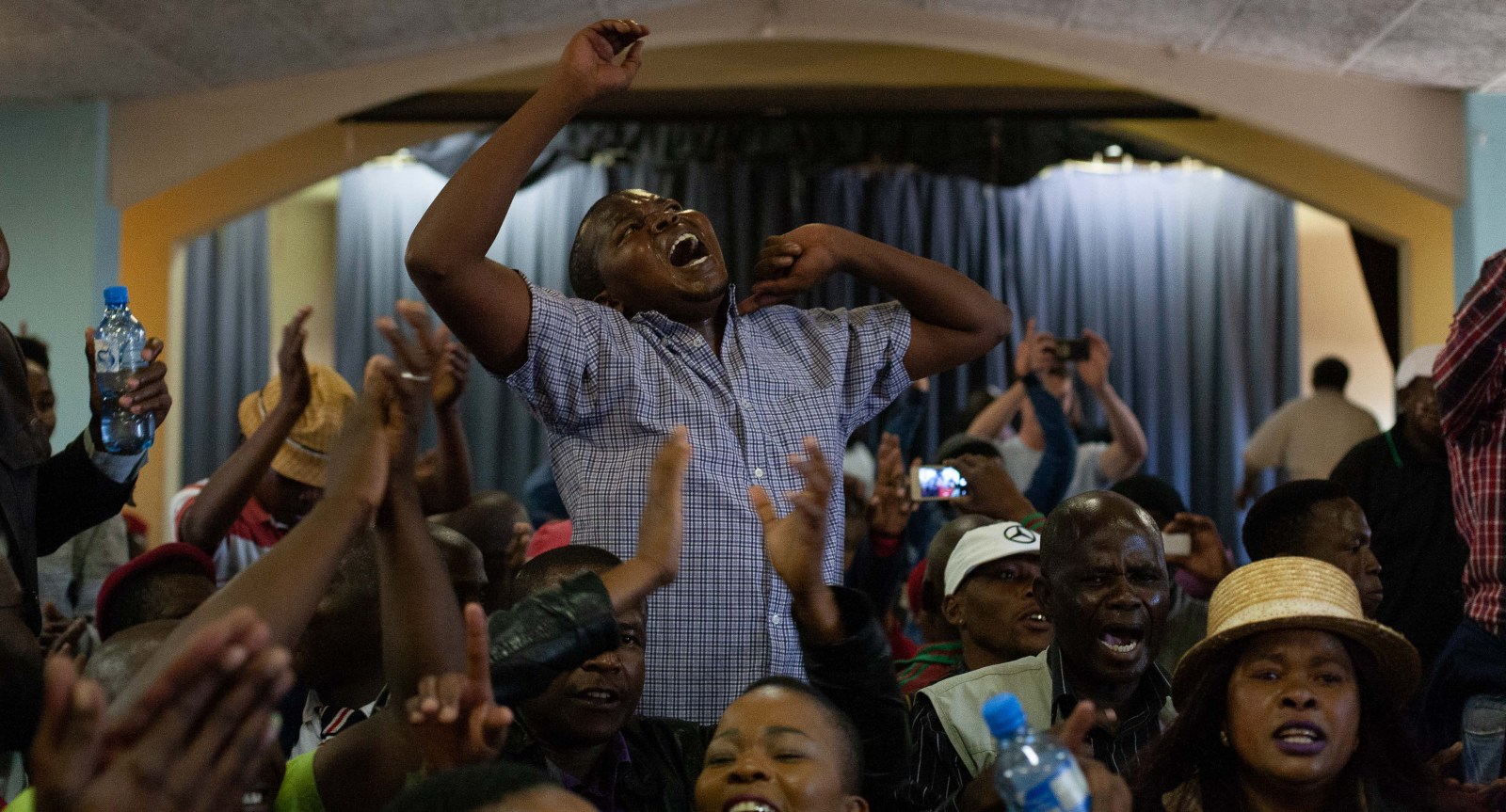 An attendee of the public hearings on changing Section 25 of the Constitution sings ahead of the sitting in Ebrahim Mogale, Limpopo. (Greg Nicolson)

The public hearings in Limpopo on amending Section 25 of the Constitution to allow for expropriation without compensation got off to a busy start on Wednesday. The majority of speakers supported the proposed amendment as stakeholders came head-to-head on the country's most controversial issue.

A long line formed outside the Ebrahim Mogale Town Hall, in Marble Hall, Limpopo, on Wednesday morning as people arrived to express their views on the proposed amendment to Section 25 of the Constitution, proposed in support of land expropriation without compensation.

The metal detector broke as they rushed inside, filled the seats and lined the walkways. The EFF had the strongest presence of the political parties and their members sang in anticipation of their leader Julius Malema’s arrival. DA members also arrived in their numbers, but many chose to sit in the outside overflow area.

As the MPs sat down, Malema was clearly the most respected leader in the room. The crowd booed Cope leader Mosiuoa Lekota, who has taken a firm stance against expropriation.

It was Vincent Smith, chair of the parliamentary committee on the proposed constitutional amendments, who was in charge. He called for the first 10 speakers. Dozens of hands shot up.

The public hearings into whether the Constitution should be amended began in Northern Cape on Tuesday and will move throughout the country over the next five weeks. Speakers on either side of the debate spoke passionately in Marble Hall on Wednesday morning, with the majority arguing for expropriation without compensation.

“In 1948,” a representative of the Bela Bela Tax Payers’ Association began before the crowd jeered the elderly white man.

“In 1948, the Universal Declaration of Human Rights was signed.” The law must remain to protect property rights for all and avoid destabilising the economy, he continued.

A leader of Agri Limpopo said Section 25 hadn’t held back land reform. Rather it has been the poor implementation of government policies, he said, as former president Kgalema Motlanthe’s high-level panel recently attested. He told the committee not to put the agriculture sector and jobs in Limpopo at risk.

Smith struggled to control the jeering crowd and keep order as people kept squeezing into the hall and wanting to speak. One man climbed in through a window rather than trying get through the crowd.

The crowd was clearly divided and a young black woman addressed the white speakers. She called for expropriation without compensation and said the problem was that farmers didn’t want to share the land dispossessed from the majority of the population. On the economy, she said: “It won’t suffer. We are educated.”

Anger over the country’s lack of land transformation was palpable. One speaker said the land would be taken by force if the Constitution isn’t changed. Many speakers said that most land around the area was owned by a handful of people who are not using or sharing it.

Most speakers noted their challenges and their need to access land for various purposes – to build houses, farm, provide jobs. Among those supporting the change, there was some caution about what would happen if land was expropriated without compensation.

“It must be amended,” one man said. But he added that the government has failed to meet its land reform goals and shouldn’t be the custodian of expropriated land. “The state will be a problem for us if it becomes the custodian.” He proposed that an independent body oversee the land use and redistribution.

A speaker from an organisation representing small-scale farmers and farm workers questioned those who praise the Constitution. “It is under this Constitution that we became the most unequal country in the world, the poor becoming poorer and the rich becoming richer.” He proposed first expropriating land from farmers who abuse their workers or let their fields lie fallow.

The hearings will move to Mokopane, Limpopo on Thursday. They will contribute to the committee’s recommendation to Parliament on the issue, in addition to the hundreds of thousands of written submissions it has already received. DM