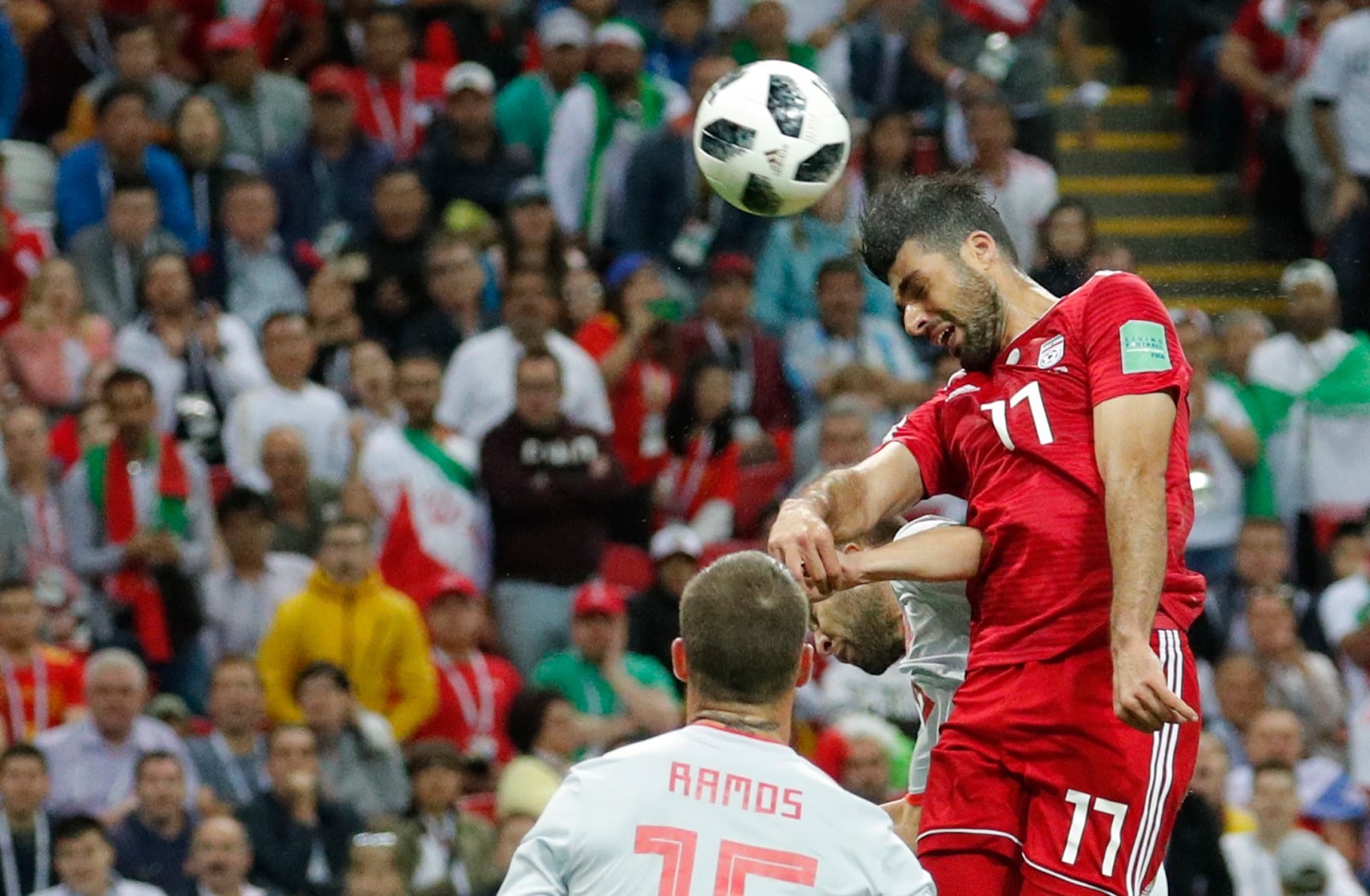 Vahid Amiri of Iran in action during the FIFA World Cup 2018 group B preliminary round soccer match between Iran and Spain in Kazan, Russia, 20 June 2018. EPA-EFE/ROBERT GHEMENT

Three teams can book their flights back. But Group B offers some intrigue.

Spain dominated possession, but they had just a solitary goal to show for their efforts. That honour belonged to Diego Costa, who is in the hunt for the Golden Boot. But the top of Group B remains wide open with Spain joining Portugal at the summit, while Iran are still in with the merest of sniffs. All they have to do is beat Portugal in their final game. Easy.

Not a great day for African teams, even those that weren’t playing. Luis Suarez scored the only goal in a rather scrappy match. The win sent not just one but two teams packing. Saudi Arabia and Egypt are both going home, as soon as they’ve played each other next week.

It was never going to be anyone other than Cristiano Ronaldo to help Portugal along in this World Cup. Maybe that’s why he falls over so easily – it’s because of the weight he has to carry on his shoulders. Ronaldo’s goal returned him to the top of the Golden Boot standings and confirmed Morocco’s exit from this year’s tournament.

Russia’s Burger King chain had to apologise for an ill-advised social media campaign where they offered 3 million Russian Roubles (R640 000) and a lifetime supply of Whoppers (the burger) to Russian women who get themselves impregnated by a soccer player at the tournament. [The Guardian]

The former Tottenham owner posted a picture of the Lions of Teranga squad to Twitter on Wednesday, alongside the caption: “I recognise some of these guys from the beach in Marbella. Multi-tasking resourceful chaps.”

And because being a giant moron in one Tweet is not enough, he rattled off several more saying he couldn’t understand why people thought it was offensive, calling his followers over the top and failing to understand what he had to apologise for. He eventually did apologise but, just to really bring the point home of how he doesn’t get it, he later told the Mirror that some of his best friends “fought against racism for years”. Shame. [Sport24]

Despite that nonsense, Senegal’s fans did make the headlines for their gesture of leading a stadium clean-up following their side’s 2-1 win over Poland. At the time of writing, no analysis has been offered by Lord Sugar.

Senegal⁠ fans cleaning their section before leaving the stadium after an historic victory.

Neymar was back training with Brazil after having to sit out of a session earlier this week because he was kicked so much in their opening fixture. He’s expected to be fit for Friday’s fixture against Costa Rica. [The Independent]

“I’ve seen a couple of those Russian dolls, they make me look a bit chubby. I’ll have to get one.”

Harry Kane on being told there are Russian dolls or “matryoshka” that look like him being sold as souvenirs in Moscow’s Red Square.

Eat your heart out, Colonel. Korean Fried Chicken (KFC) with kimchi mayonnaise is your homemade answer to takeaway junk. Marinated overnight to ensure the chicken is juicy and tender, the mayo will take the edge off all the oil. Try this recipe. DM