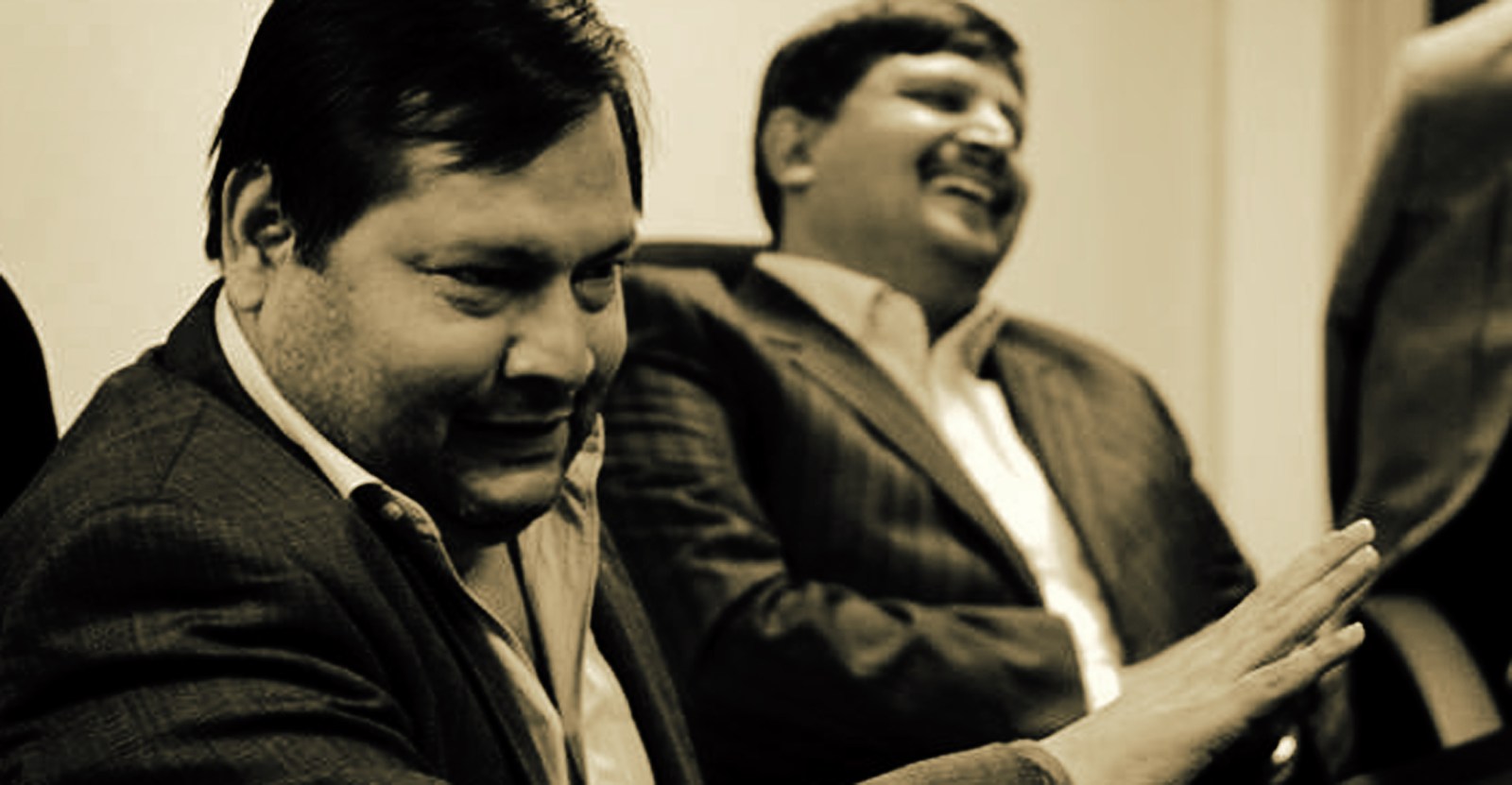 Aj and Athul u (Gallo Images)

When Johannesburg lawyer Naushad Gattoo found himself short of a couple of million to pay out a client’s damages claim, he allegedly blamed it on his Gupta connection – complete with a picture of a fake draft court order as he pretended that his firm’s Standard Bank account had been frozen due to ”suspicious activity” emanating from banking transactions involving the Guptas.

Naushad Gattoo, a little known lawyer in the pool of attorneys representing various companies in the Gupta empire, has been hit by a multimillion-rand legal mess of his own.

While the Guptas, unusually, have zilch to do with this matter, Gattoo himself drew the family name into his personal battle after telling a client whom he owed money to, that his inability to pay up, was as a result of his association with them.

The Sandton-based attorney who represented several Gupta companies against the business rescue practitioners of Optimum Coal Mine recently, is now the subject of a Law Society complaint and a criminal investigation relating to the alleged theft of client funds.

His unhappy client has submitted a claim to the Attorney’s Fidelity Fund and, Gattoo has been threatened with further legal action that includes the liquidation of his law firm.

Gattoo, though his lawyers, said the allegations against him were “clearly defamatory, vexatious and spurious”. The complaint to the Law Society as well as the institution of a “baseless” criminal case will be defended. Read his lawyer’s letter here:

Daily Maverick has established that one of Gattoo’s former clients submitted a claim to the Fidelity Fund as he seeks to recover the balance of a R7-million plus payout from the Gauteng Department of Health.

Businessman Zaheer Ebrahim Carrim’s company was awarded damages as a result of a lease dispute with the department and, following his win in arbitration proceedings, government paid the money into the Standard Bank trust account of Gattoo’s firm, N. Gattoo Incorporated, in March 2018.

Somewhere along the line just under R20,000 of the amount paid out allegedly disappeared and Gattoo told his client that a “reduced claim amount” of R7,024,206 had been paid.

Three days after confirmation of the payment from the damages claim, Carrim provided his lawyer with his banking details to effect transfer of his money.

But then things spun out as Carrim seemingly had to hound Gattoo to pay up. In his statement in support of his claim to the Fidelity Fund, Carrim said:

“Between 23 March and 18 April 2018, I must have had at least 50 discussions with Gattoo regarding the payment. I was given different excuses from time to time.”

He said Gattoo eventually told him that he had obtained a court order to compel Standard Bank to release payments due to him.

This was after the bank, “consequent upon allegations that he was involved in banking transactions of behalf of the notorious Gupta family,” had frozen his account, Carrim said.

“He informed me that Standard Bank had frozen his account as a result of suspicious activity thereon.”

Carrim said he later discovered that there was never such an application nor order.

It is a well-known fact that the Guptas have had banking hassles of their own. Several of the country’s major banks shut them out in 2016 and subsequent litigation involving former finance minister Pravin Gordhan and the Bank of Baroda revealed billions of rand in alleged suspicious transactions.

But while Gattoo may have thought that his little Gupta yarn would buy him some time with his client, Carrim, seriously ticked off, didn’t buy it.

He grew tired of the excuses and roped in a new lawyer, Shaheed Dollie, who requested a copy of the “order” that Gattoo claimed to have obtained against Standard Bank.

Dollie, in a confirmatory affidavit, said that Gattoo told him he had already given a copy thereof to his client.

In fact, Gattoo had only sent Carrim a screenshot on April 13 via Whatsapp of what he purported was a court order, complete with what appears to be a High Court stamp dated April 16, 2018. 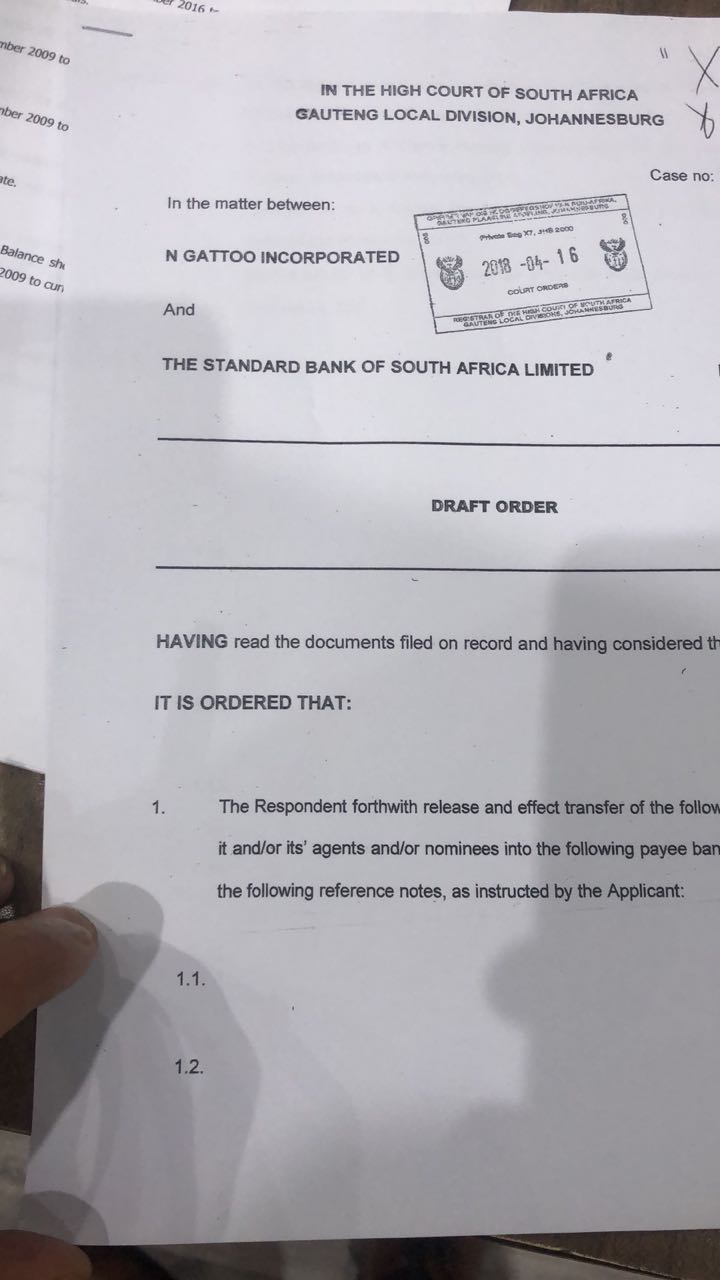 The document appears to have been sent via Whatsapp because Gattoo’s email was allegedly not working. In a text message accompanying the “order,” Gattoo allegedly told his client:

“Embarrassing so my email not functioning properly because its’ suspended due to payments.”

“I have subsequently been advised that such application was never granted and no order was obtained,” said Carrim in his statement.

He said despite numerous promises to pay him between April 16 and 18, Gattoo failed to do so.

Instead, he arrived at Carrim’s home on the evening of April 18, in the company of a mutual friend.

This was allegedly triggered by interest payable following a failed commercial transaction.

Carrim said Gattoo “begged for mercy” and undertook to pay his money within 90 days. Following that meeting, Carrim asked his new lawyer, Dollie, to meet Gattoo to draw up an acknowledgment of debt document and to make payment arrangements.

“This meeting was conducted on a with prejudice basis and was recorded,” he said.

Gattoo had signed an acknowledgment of debt document in terms of which he agreed to pay just over R500,000 by April 26 2018 and the balance in installments. He was 24 hours late with the first payment as well as a second of R1.2-million on May 8 and then failed to make the rest of the payments.

It has also emerged that his claim of a “reduced” payout by Gauteng health was not all that accurate, according to Carrim.

After discovering that he had also been short-changed on this front, Carrim accused Gattoo of having “fortified” his initial lie about the exact amount due to him by allowing a lesser amount to be reflected in the acknowledgment of debt agreement that he signed on April 19.

Carrim, in his statement, said Gattoo had no authority to use his money and accused his former lawyer of theft. He has now submitted a claim for the balance of just over R5-million to the Fidelity Fund. Along with that, Gattoo faces a complaint before the Law Society.

Dollie, in a written complaint, urged the Law Society take immediate steps to suspend Gattoo from practice pending an application to strike him from the roll of attorneys.

“You are no doubt aware that there is a grave risk to other clients and we trust that you will act expeditiously,” said Dollie.

Gattoo was the instructing attorney on the recent unsuccessful application for leave to appeal by Gupta executives, Ashu Chawla, Salim Essa, Ronica Ragavan and others in which they sought to block the business rescue practitioners from accessing the offices of the Oakbay group of companies. They lost the application with costs. DM