As security companies and guards face off, a wave of crime hits cash vans 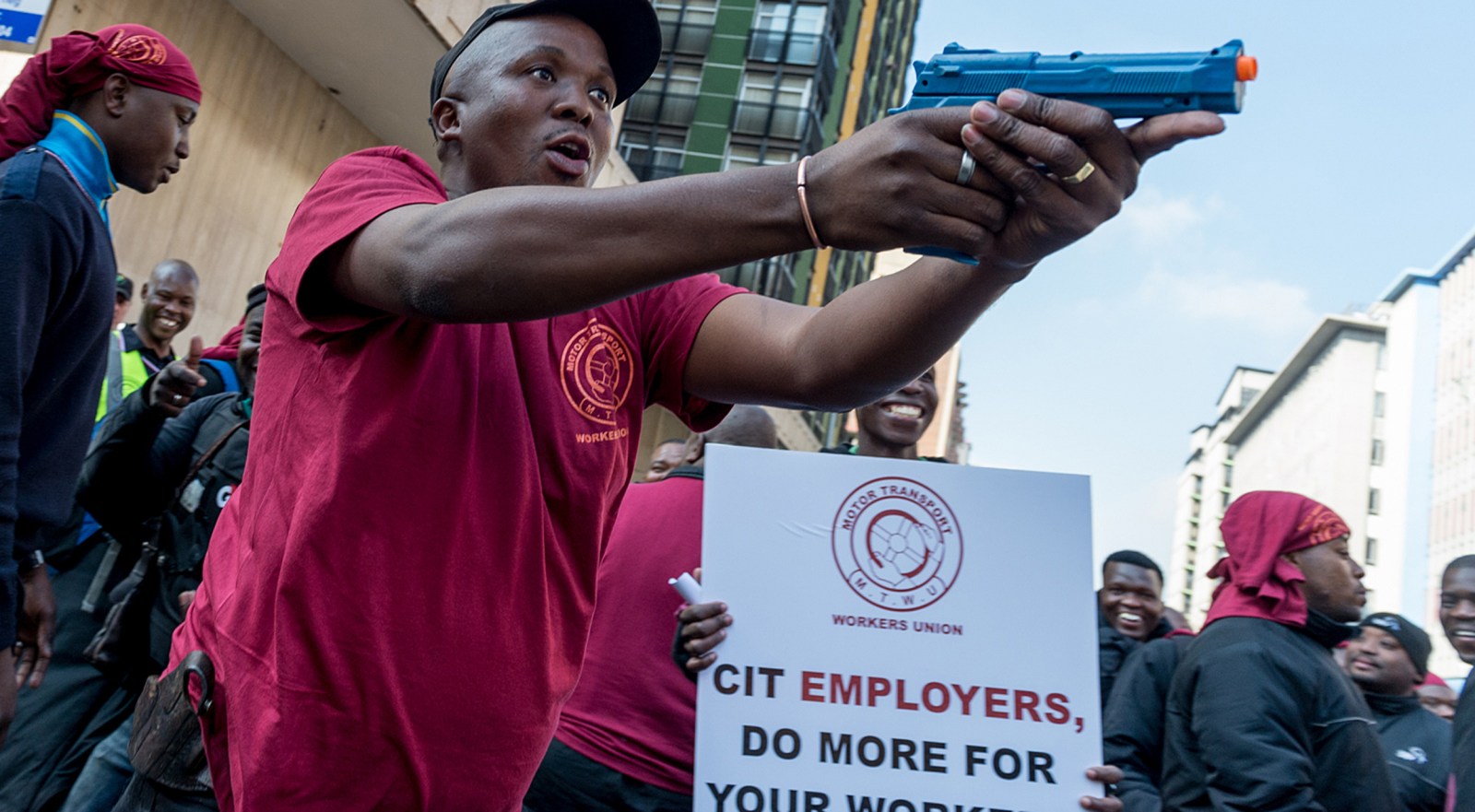 Members of trade unions Fedusa and the Motor Transport Workers Union's (MTWU) stage a demonstration through the streets of downtown Johannesburg, South Africa, 12 June 2018. Following a surge in cash-in-transit heists around the country in recent weeks the drivers, who are employed by cash handling companies, marched to the office of the Gauteng Safety MEC asking for more protection. Over 74 cash heists have been reported since August 2017. EPA-EFE/YESHIEL PANCHIA

Less than a month after police bosses declared their preparedness to tackle cash-in-transit robbers, attacks on CIT vehicles continue as industry players challenge claims they are not doing enough to ensure the safety of drivers.

On Monday ,Cape Town police confirmed that at about 8am, there was a cash-in-transit robbery on Jakes Gerwel Drive before the Philippi turn-off. Police said the vehicle was attacked by suspects using explosives. The suspects fled the scene with an undisclosed amount of cash.

Speaking during the CIT sector march in Johannesburg last week, Mdumiseni Mabaso, General Secretary of the Motor Transport Workers Union, said 159 robberies had occurred within the first six months of 2018.

The march was staged to call for an end to the killings of cash-in-transit guards during robberies and attacks, and to call for safer working conditions.

During the march guards demanded bigger guns and said they refused to surrender their lives or let the country be run by “thugs”. They demanded that cash-in-transit vehicles to be fitted with sirens and emergency lights, and that their drivers be allowed to drive in the emergency lane.

Reacting to claims by security guards that they are often inadequately armed to protect the cash and themselves from criminals, and that guards needed to be given pistols with 3 bullets against men armed with AK 47s and explosives, G4S Cash Solutions managing director Keith Alberts said employees’ safety was a priority at the company, one of three major money movers in the country.

“The safety and security of our staff are paramount and G4S conducts regular practical and theoretical firearm and health and safety training for our drivers so that they know how to respond in the event of an attack.”

Many drivers criminals often pounced when you least expect it, and as one guard put it, “on a normal day”.

“In addition, G4S fully complies with all the requirements as set out in the Firearms Control Act and all staff are required to complete the relevant firearm training on an annual basis as per the Act,” Alberts said.

In the last few weeks, law enforcement agencies have announced a number of arrests of cash-in-transit robbery syndicate members but information regarding their prosecution has been scant.

The common feeling among many of the guards who marched last week was that curbing heists required obtaining a high conviction rate in these cases. Guards have claimed that the law often lets cash-in-transit robbers off easily.

G4S said staff were allocated the maximum amount of ammunition for the firearm with which they are issued during the course of their duty.

The security company said it would continue to work with commercial partners as well as research and development organisations such as the CSIR to develop technologies to protect its staff. It also said recently it had concluded the testing of on-board vehicle technology as well as cross-pavement technology, details of which the company said it hoped to share shortly.

G4S said CIT companies continually invested in technology that was implemented in their armoured vehicles, and added that some companies invested in additional air and land support.

Guards claim that they are often prime suspects after a robbery or attack on cash-in-transit vehicles and are subjected to polygraph tests, instead of being offered counselling and support.

Companies usually conduct their own internal investigations following a heist.

“All three of the biggest CIT companies in the country comprising SBV Security, G4S Security, and Fidelity Security provide counselling and medical assistance to CIT staff. These differ from one company to another based on human resource policy,” Alberts said.

“These attacks are unacceptable for all operators across the industry and we believe in working together, sharing intelligence and collaborating with other CIT operators and law enforcement agencies to improve the environment in which we all operate.”

Alberts said the collaboration enabled them to address areas such as the regulation of the industry, establishing industry minimum standards and most importantly, providing joint tactical support and increasing their investigative scope.

SBV Security announced in April that between January and April this year there were 34 incidents of CIT robberies affecting the company alone compared with nine in the same period last year. The company said CIT robberies were on the increase and acknowledged that criminals were using dangerous weapons such as explosives, AK47s and R4 rifles to seize money.

The company said it believed that the key to minimising their vulnerability and risk was through extensive training of their officers. DM