‘His contribution is second to none’: Former comrades defend Treasury’s Momoniat after EFF slurs 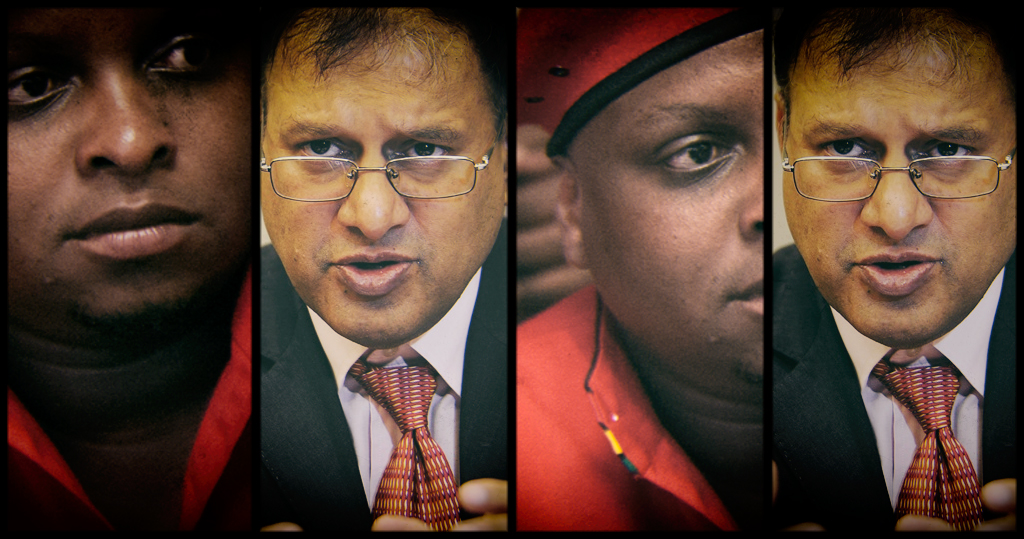 Treasury official Ismail Momoniat had been ‘part of a cabal that divided the Mass Democratic Movement’ during apartheid, a defiant Floyd Shivambu charged on Wednesday, as others leapt to Momoniat’s defence. The EFF, meanwhile, was dismissive of Momoniat’s ‘exaggerated Struggle credentials’. But this, said one ardent academic supporter, was ‘absolute bollocks’.

Economic Freedom Fighters deputy president Floyd Shivambu showed no sign of backing down in his criticism of Treasury official Ismail Momoniat on Wednesday, tweeting further allegations about Momoniat’s history and current professional conduct. Shivambu was aided in this by a formal statement from the EFF, supporting Shivambu’s views. But the Fighters’ stance has attracted widespread condemnation – particularly from old comrades of Momoniat’s who say that the red berets simply don’t know what they’re talking about.

“It is absurd that I have to explain and justify someone like Momo.”

That is the view of the University of Johannesburg’s Professor Farid Esack, in response to the EFF’s attack this week on the character and history of Treasury deputy director-general Ismail Momoniat.

In the aftermath of a parliamentary finance committee meeting where the EFF’s Floyd Shivambu objected to the presence of Momoniat over other “African” Treasury officials, Shivambu dug in his heels.

Responding to criticism on social media on Wednesday, Shivambu went on to claim that Momoniat was “part of a cabal that divided the MDM” (Mass Democratic Movement) during apartheid, and that Momoniat’s present and past conduct demonstrates the fact that the official “doesn’t respect African leadership”.

A statement from the EFF expressed support for Shivambu’s views. It dismissed Momoniat’s “exaggerated Struggle credentials” and repeated the claim that “Momoniat has no regard for black, particularly African leadership in National Treasury […] To him, leadership that deserves respect is only those of Indian, Coloured or White origin”.

The EFF’s extraordinary attack on one of South Africa’s most experienced Treasury officials has caused speculation that there there may be something quite personal underlying the party’s antipathy – such as anxiety over the potential reboot of the South African Revenue Services, given leader Julius Malema’s past tax woes.

Momoniat has since received expressions of support from his current and past Treasury co-workers, as well as parliamentary representatives.

But for those who worked with Momoniat in the anti-apartheid movement, there was a particular sense of anger and frustration at Shivambu’s comments.

Professor Esack, who was part of the leadership structures of the United Democratic Front (UDF) alongside Momoniat, told Daily Maverick that Momoniat’s contribution was “second to none”.

Esack dismissed the idea that Momoniat was part of a disrupting “cabal” in the UDF or the MDM as “absolute bollocks”.

That there were differences of opinion within the UDF is something Esack readily admits. He cites the 1985 visit of US Senator Ted Kennedy to South Africa as one event which was the source of robust contestation, over whether the UDF should welcome a politician who could be the USA’s next president – and thus “our ideological enemy”.

But such contestation of ideas, says Esack, is the nature of broad-based coalition politics.

He suggests that the myth that Momoniat was involved in playing a disruptive, shadowy role in anti-apartheid politics may stem from the fact that he was not often in the limelight.

Just because Momoniat was more comfortable in roles beyond public speaking, Esack says, does not mean he was “manipulative behind the scenes”. In fact, Esack says that Momoniat’s relative reticence during the Struggle is evidence of an approach to black African leadership which is precisely the opposite of that claimed by Shivambu.

“One of the reasons [Momoniat] stays in the background is part of the historical aspect of the ANC that black Africans should remain in top leadership,” Esack explains.

“[Momoniat’s] entire life has been one of respecting African leadership.”

“I’ve got to hand it to Momoniat,” wrote Shilowa sarcastically on Twitter.

“He has for many years hidden his disdain for African leadership both during the UDF, underground, and after the unbanning of the ANC and SACP. I speak as someone who worked with him. I’ve crossed swords with him when I was in GPG [Gauteng Provincial Government] & him at Treasury. Not once did I feel our disagreements were based on anything other than the need for us to adhere to Treasury regulations.”

Cope leader Mosiuoa Lekota, another former comrade of Momoniat’s from UDF days, told Daily Maverick that he “rejected with contempt” the EFF’s views on Momoniat.

“I have never come across such allegations against Comrade Momoniat,” Lekota said.

“The EFF is recreating history that happened before they were born.”

The idea that EFF leadership had betrayed their youth and inexperience was raised by a number of political observers during the online debate over the party’s attack on Momoniat.

“I am certain that he will, in time, regret and apologise. He is young and learning. Forgive him.”

But others were feeling less charitable.

“One would expect the EFF to welcome this kind of competence and vigilance [at Treasury] rather than hauling things out of an imaginary fictionalised past of which they have no personal knowledge.”

There was at least one hint that not all members of EFF leadership endorsed Shivambu’s position, however.

In response to a taunting message, the EFF’s national chairperson Dali Mpofu tweeted:

“I have known Momo for more than 30 years. I worked with him in the UDF in the EARLY 80s… We were thoroughly assaulted by the SA police in Lenasia on the day of the Tricameral “elections” in 1984. I have NEVER cared about his ‘Indianness’, whatever that means!” DM