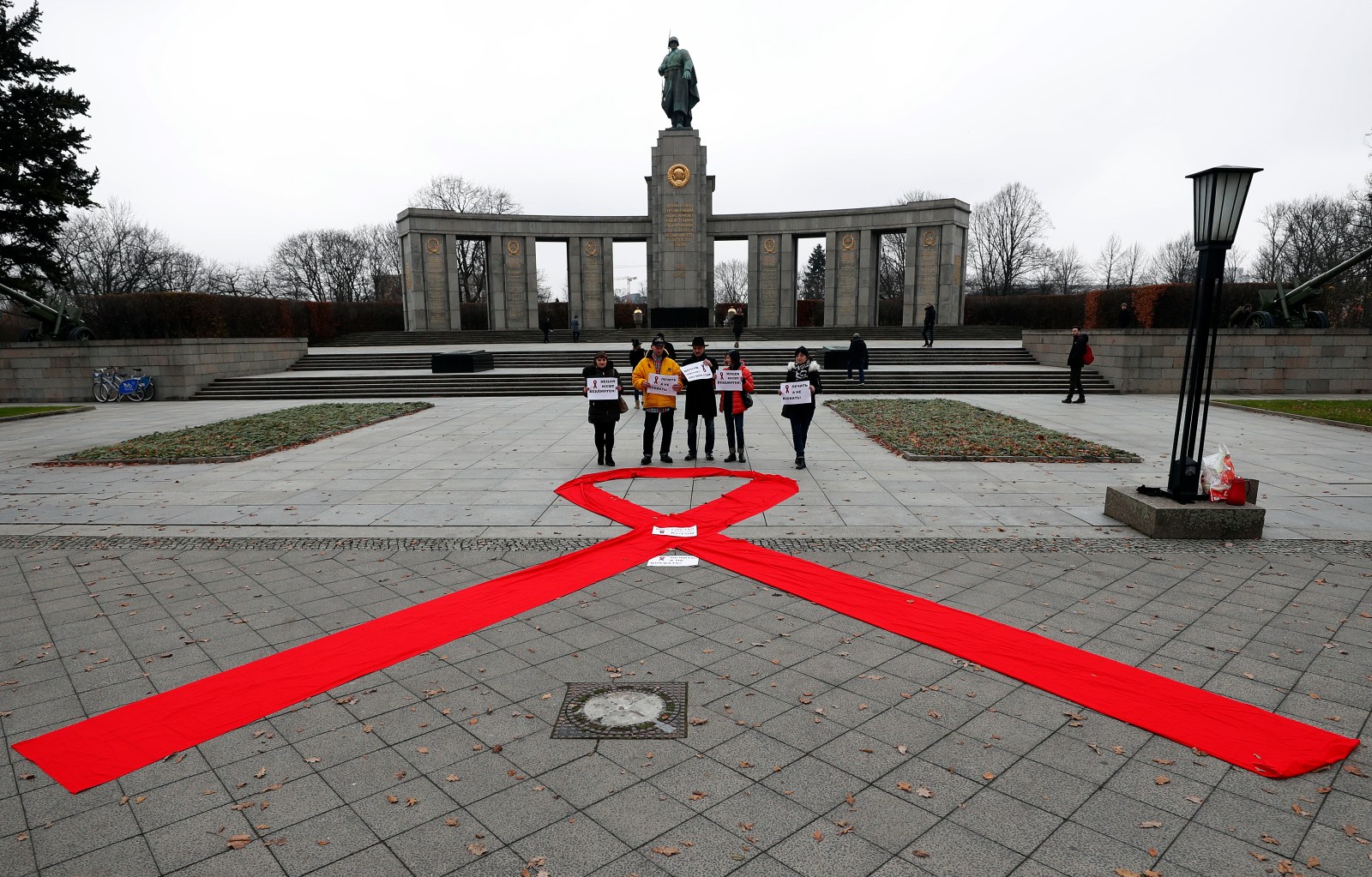 Members of 'Berlun', a group of activists for the rights of HIV positive patients, stand next to a giant red ribbon, the symbol against AIDS, in front of the Russian War Memorial, in Berlin, Germany, 01 December 2017. EPA-EFE/FELIPE TRUEBA

Within a week, the “revolutionary” new HIV drug dolutegravir has gone from panacea to pariah. Recent data from a Botswana study linking the drug to birth defects has seen the highest international health bodies issuing public warnings. Heralded as a breakthrough in the fight against HIV, and just as the country is embarking on a massive shift in its HIV treatment strategy based on this drug, the news has caused global panic. What does this mean for the biggest HIV treatment on earth, and for the women who make up the majority of its users? While some fear this news could destabilise South Africa’s remarkable progress in the fight against HIV, others caution against sounding the alarm bells too soon.

On 18 May the World Health Organisation, European Medicines Agency and the United-States’ Food and Drug Administration unanimously issued warning statements about a possible link between the anti-HIV drug dolutegravir and birth defects, sparking a wave of international media reports and panic.

Dolutegravir is not just a new HIV drug – it has been described as a breakthrough weapon in the global fight against HIV. The low cost and comparatively mild side-effect profile have made it an attractive option for treatment programmes, especially in developing countries where savings on drugs can make it possible for significantly more people to be treated.

The possible link between dolutegravir and neural birth defects which could impact on the development of the brain and spine was recently discovered in an ongoing observational study in Botswana, which switched its first-line HIV regimen to the drug in 2016.

The study found four cases of neural tube defects in 426 women who have become pregnant while taking the drug.

While Professor Francois Venter from the Wits Reproductive Health and HIV Institute said this is not yet statistically significant, and could potentially be related to other factors, it prompted the Europeans Medicines Agency to issue a direct warning stating:

“Dolutegravir HIV medicines should not be prescribed to women seeking to become pregnant.”

The World Health Organisation and Food and Drug Administration were more tempered in their guidance, urging healthcare professionals to make women aware of these potential risks, but not directing that it should stop being prescribed to women who might fall pregnant. They also noted that pregnant women on dolutegravir should not be switched hastily to different regimens as there is an increased risk of transmitting a virus to the baby.

But, despite the public concern globally, very little has been said about the impact of this news on the country most affected, not to mention being set to be responsible for a massive portion of the drug’s future market. South Africa has the largest HIV treatment programme in the world: 4.2 million receiving antiretrovirals and, as promised by President Cyril Ramaphosa in his State of the Nation Address, this will be increased by two million people by 2020.

But dolutegravir has been described as the main reason this goal is attainable. The National Department of Health had already planned to introduce a dolutegravir-based first line regimen to replace the existing regimen, hoping to switch the majority of patients starting from April 2018. But the introduction has been put on hold due to registration delays with the newly formed South African Health Regulatory Products Authority which replaced the Medicines Control Council.

“It’s come at exactly the wrong time for South Africa and affects exactly the vulnerable group we are trying to protect: young women.”

According to a 2017 paper published in the South African Medical Journal, a dolutegravir-based regimen could translate into initial cost-savings of 20% of the country’s annual ARV budget. When volumes are met, when the majority of patients have been switched to the regimen, cost-savings could reach 50%. Venter said this is largely due to the price of the raw materials used to manufacture the drug.

“The benefits of the drug are huge and it would be a tragedy if these results are confirmed and we lose it as a treatment option for many women,” he said.

HIV expert and technical adviser to the Department of Health, Dr Michelle Moorhouse, said the drug has other significant benefits for women.

“It is a very tricky situation as dolutegravir is a great drug, and for those women who are using effective contraception, then it remains a great option,” she said.

Many other existing HIV drugs interact with common forms of contraception, making treatment more difficult for many women.

But as the health department has already made concrete plans to embark on a completely dolutegravir-based regimen, Dr Yogan Pillay, the deputy director general for HIV, told Health-e News that they are “following this very closely”.

“Next week we will convene a meeting of experts to discuss our options based on the World Health Organisation guidelines,” he said.

He said the department is concerned about the financial impact of changing the dolutegravir guidelines, but that the first priority was the clinical well-being of patients.

He said a possible option is to continue with the current regimen for women of reproductive age and offer the dolutegravir regimen to others.

But, said Venter, this is problematic because women already make up about 70% of the total patients on HIV treatment in South Africa and it is ethically questionable to offer them a sub-standard option compared to men.

“One thing I am angry about is that no one funds drug studies on pregnant women,” he said.

He said that “every now and again we get a signal from women that something is wrong” only after the drug has been approved and is in use instead conducting prior research which would identify “possible risks so we are able to prepare for that beforehand.

“Governments, drug companies and funders haven’t invested in these studies and the argument is often that is unethical to test in pregnant women, but I argue the opposite. It’s unethical not to do this research.”

He said the Botswana case is a “massive experiment on pregnant women without the safety and monitoring we have in normal clinical studies”.

Moorhouse, also from the Wits Reproductive Health and HIV Institute, cautioned against alarmist reactions to the warnings.

“I have to say this is an early signal, which we need to take seriously, but we have seen similar signals before with other drugs, which over time turned out not to be the problem we anticipated,” she said.

There are a number of other studies under way which could clear up the link and potentially clear dolutegravir’s association with this serious potential side-effect, as well as clear the way for South Africa to more easily reach its treatment targets.

“Until we better understand this signal from these ongoing studies, we have to exercise caution in using dolutegravir in women who are pregnant or desiring a pregnancy,” said Moorhouse.

“We simply need to introduce the necessary precautions as outlined in the various regulatory and other documents, while we wait for the clearer picture to emerge for the ongoing studies and data analyses,” she said.

But she said the benefits of the drug, including the fact that it has shown no development of resistance in any patients, should not be overshadowed by this “signal”.

“I really do want to caution against panic,” she said.

And, while the idea of the drug as a panacea might be losing favour, she said dolutegravir “should not be heralded as a pariah”. DM