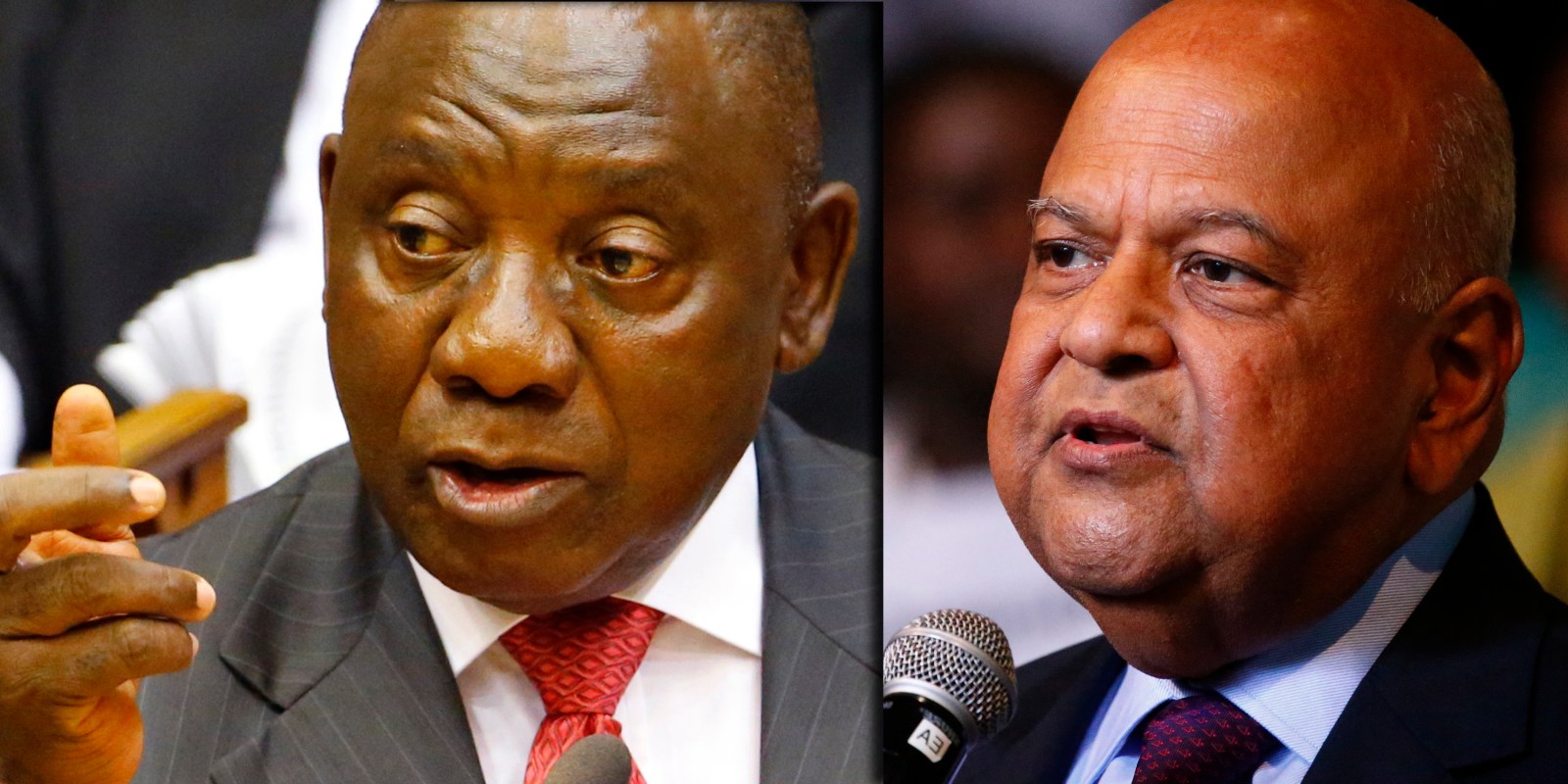 President Cyril Ramaphosa on Thursday took full advantage to stamp his tone on what had been a tetchy budget vote debate in Parliament a day earlier. Effectively, the six-hour deliberation of the Presidency: Budget Vote 1 was another state of the nation address, coming just a few days before his first 100 days in office – an important political measure for a new president’s foothold in office.

President Cyril Ramaphosa’s “thuma mina (send me)” new dawn is edging on. In just short of 100 days, changes in the security cluster, previously beholden to power-politicking, State-owned Entities (SoEs) boards, previously at the heart of State Capture, and elsewhere such as at the South African Revenue Service (SARS), have been announced and put into action.

Perhaps the most speedy and visible changes have unfolded in the boards of State-owned Enterprises (SoEs), where Public Enterprise Minister Pravin Gordhan on Thursday announced further appointments.

Just shy of 90 days in the job, Gordhan has made a clean sweep of the boards of arms maker Denel and Transnet – both were implicated in State Capture through associations with Gupta-linked companies – while also permanently appointing Phakamani Hadebe as Chief Executive at Eskom, the power utility implicated as central in the State Capture during the parliamentary inquiry.

There are some interesting new board members, including former ANC youth leaguer Ronald Lamola, an attorney and ANC National Executive Committee (NEC) member who is now the face of the governing party’s land reform drive; Sydney Mufamadi, former local and provincial government minister who did a stint as an academic, and Sue Rabkin, long-standing activist and former defence ministerial adviser.

While the new board members have been given clear directives to instil ethical and good governance, the immensity of the task quickly became clear. Shortly after Gordhan’s announcement, the South African Civil Aviation Authority (SACAA) grounded nine of SA Express’s planes due to safety concerns. And the impact was clear when Parliament’s House Chairperson Mmatlala Boroto broke into the Africa Day debate to announce to those MPs booked on SA Express, “you will be contacted by the travel services to arrange alternative routing… It is unavoidable as SA Express has been grounded by SACAA”.

That’s the thing about Parliament, where protocol, politicking and reality often collide in a deeply political institution.

Next, Mineral Resources Minister Gwede Mantashe, the former ANC secretary-general and trade unionist, emerged from the regular Thursday ANC caucus to be confronted by a picket of the National Health, Education and Allied Workers’ Union (Nehawu) over salary negotiations that seem to be heading nowhere slowly.

“I cannot cross a picket line,” maintained Mantashe, heading in the opposite direction as Nehawu, the largest trade union at Parliament, continued singing.

The largest trade union says it’s prepared to accept the offered 8% increase, lower than their demand, but only if Parliament’s administration is committed to dealing with pay progression, financial recognition of long service, rather than just a certificate, and leave issues, during the month long parliamentary year-end recess. Staff at Parliament are not enjoying the same benefits as those at provincial legislatures, according to one Nehawu official: the Mpumalanga legislature has settled on a 10% salary increase, KwaZulu-Natal at 9%, while both institutions also pay a housing allowance and 13th cheque.

There are some curiosities in this Ramaphosa new dawn. On Wednesday Cabinet agreed to the establishment of the presidential SoEs council to be chaired by Ramaphosa. That’s a structure the ANC legkotla of August 2016 first announced – to be chaired by then president Jacob Zuma.

It’s unclear exactly what, if anything, happened, given this week’s Cabinet decision. And this is exactly where the rub lies when it comes to matters governance of the governing ANC-run South Africa.

But it’s that governance Ramaphosa addressed on Thursday. Governance was not just about the size of Cabinet – something the DA has made much of – but efficiency and effectiveness.

“The reconfiguration of the state is a far greater and more ambitious undertaking that must go to the heart of the country’s development needs. We need to address issues of structure of all spheres and all public institutions, not just individual departments.”

And that included budgeting, monitoring of performance and improving the culture of government, which has left much to be desired by many people.

“Budgeting is about making choices. We need to have the capacity, the data and the political will to make the right choices.”

That political will is set to be tested not only when that reconfiguration of government happens, whenever that may happen, but sooner, with the presidential local government summit. After years of inattention, linked undoubtedly to ANC factional politicking, there now is an expression of “serious concern” from the highest office.

One such test already under way is that of the disciplinary proceeding of suspended SARS boss Tom Moyane – another much criticised appointment of the Zuma administration that saw the tax collector miss its targets in consecutive years. It’s moving on, as is the commission of inquiry into tax governance to restore stability at SARS. After Ramaphosa announced the commission in his opening address in Parliament’s debate on the Presidency budget vote, the terms of reference followed within 24 hours.

That SARS clean-up is important alongside that of an overhaul of the criminal justice sector. While prosecutions boss Shaun Abrahams is still in his job despite a court ruling late in 2017 that his appointment was invalid, a clean-up continues in the SAPS, bedevilled by internecine political power games and appointments often seemingly made for political pliancy.

The Hawks have a new permanent boss, Advocate Godfrey Lebeya, who had been shifted first sideways, then completely out, after a fallout when Riah Phiyega was national police commissioner. And KwaZulu-Natal has a new acting commissioner: Lieutenant-General Nhlanhla Mkhwanazi, the former acting national commissioner who, after a fallout in the police’s politicking, had been left shuffling papers for the past six years. The appointment of Major-General Peter Jacobs as crime intelligence boss is another, while after a series of acting national police commissioners there’s now Lieutenant-General Khehla Sitole permanently in place.

There are other concerns and not only the politicking about land, more specifically the constitutional review process for expropriation without compensation, that has tempers aflame. The EFF booted out their call to occupy unoccupied land on day one of the Presidency: Budget Vote 1 debate. A day later Ramaphosa had his say, pointing out that both the EFF and DA were misinterpreting the land reform process.

“The Ramaphosa definition of a ‘straw man’ is a fake policy conjured up by a desperate party in order to make a false claim.”

Aside from governance, there is what Ramaphosa on Thursday called “the united nation”. And so reconciliation, and everyone’s responsibility to redress the lingering legacy of white privilege and black poverty, also was a presidential talking point. Like the barriers that still exit in many South Africans’ minds.

“They (barriers) exist in the minds of people who think that it is acceptable to sing Die Stem and display the old South African flag. These are not symbols of Afrikaner identity. They are symbols of discrimination, oppression and misery,” said Ramaphosa, adding in reference to AfriForum CEO Kallie Kriel’s recent comments:

“These barriers exist in the minds of those who would deny that apartheid was a crime against humanity.”

Ramaphosa knows how to make the best possible use of a public platform, such as a budget vote debate presents, to bring home his message. But also how to pre-empt criticism, not only from within government, but also the governing party.

The $100-billion (R1.3-trillion) investment drive and co-operation to bring private big business on board, he said, “… is not a 1996 class project. This is about addressing unemployment in this country”. This comment is a preventative move against the kind of mobilisation against president Thabo Mbeki that ultimately saw the latter out of office. The Growth, Employment and Redistribution (GEAR) policy of that time was regarded as a neoliberal business-friendly programme and anti-people orientated gaze of the ANC.

A comment like this is a hint that the battles within the governing party are far from over.

But Thursday’s presidential budget vote reply mainly was about re-emphasising the messages Ramaphosa first set out in his SONA. The delivery comes with a dose of seriousness, consistency and ability to address key challenges without hectoring. It’s that approach that has the opposition floundering after years of the obvious target that the scandal-ridden Zuma administration presented.

And then there’s a good dose of collegial banter. And so EFF leader Julius Malema, who asked about the absence of the first lady – perhaps that was an allusion to past indiscretions unearthed in the bruising factional battles ahead of the December 2017 ANC national conference – got his reply, in absentia.

“The first lady had a knee operation almost three months ago. She has not been able to walk properly… So, Honourable Malema, there is nothing wrong. She has just not been well. She will soon be making her contribution, specially in her area of speciality – early childhood,” said Ramaphosa, inviting Malema to visit early childhood development centres where he may just meet the first lady.