Standard of fairness should apply to all athletes 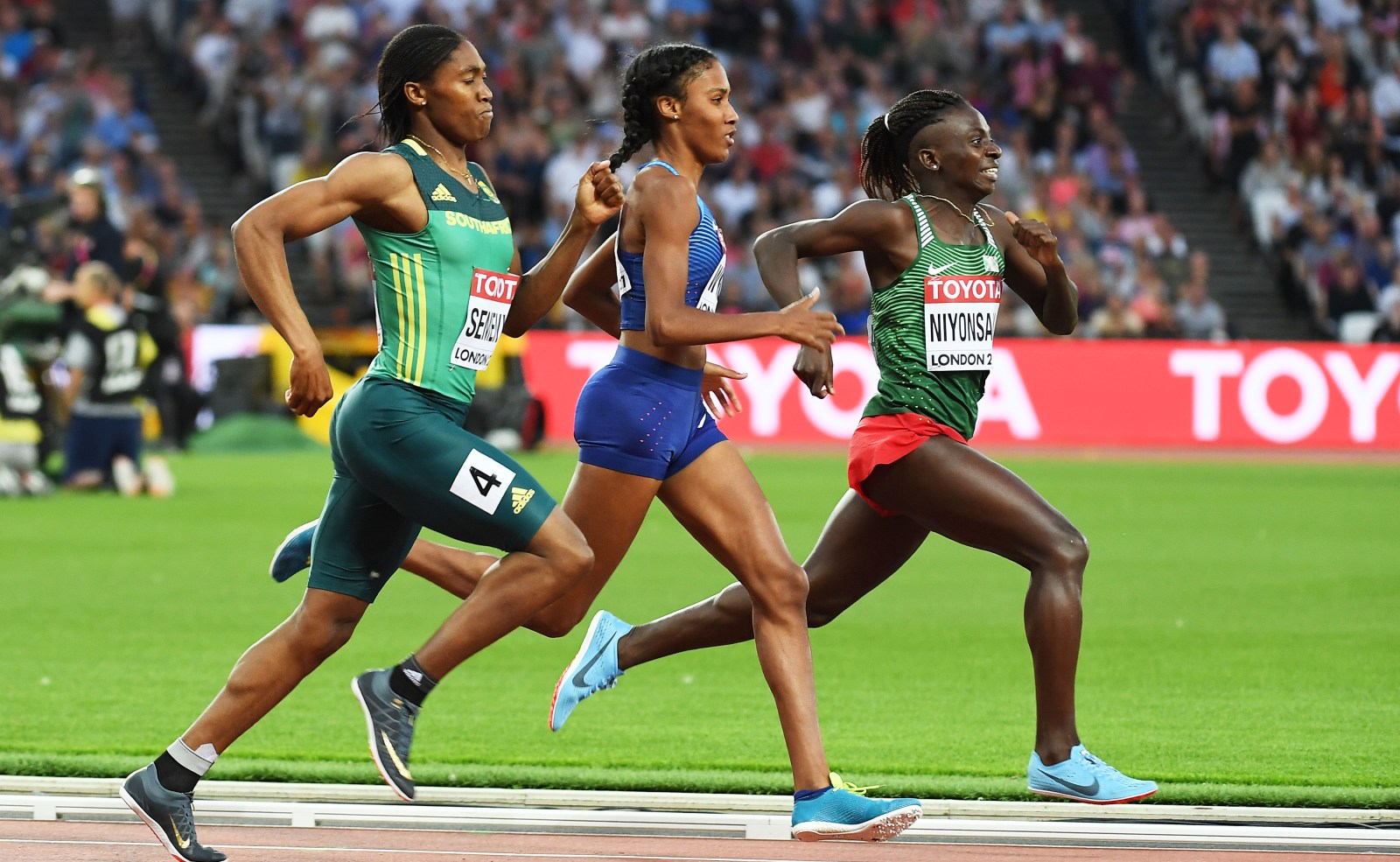 The policy of categorising individuals into competitive groups based upon inherent ability is of ethical concern. Segregation of competitors into those deemed to be acceptable competitors and those deemed to be excluded on the basis of some inherent characteristic is not the same because it excludes certain human beings from a field of human endeavour simply on the basis of the biological lottery.

In April 2018, the IAAF issued Eligibility Regulations for athletes with differences of sex differentiation (DSD). Regulatory bodies have learnt valuable lessons from previous unfortunate and inconsiderate handling of cases and from international outcry against discriminatory, irreversible, invasive, enforced or coerced examinations and treatments. Many of the victims were from developing countries, while the regulatory bodies and their advisory panels consisted almost exclusively of professionals from highly developed areas. The IAAF has now produced a document which demonstrates more consideration for privacy, individual gender and treatment choices and dignity. The new regulations do not apply to participation in national sport events (apart from recognition of world records), and this allows for differences in legislation between countries. Although this sensitivity is welcomed, some changes to the previous regulations invite serious questioning.

The revised requirement is a testosterone level reduced to below 5nmol/L for all categories of “relevant athletes”. The new regulations only apply to a newly introduced list of “restricted events”. The IAAF explains that both these changes are based on scientific evidence which has evolved since the Court of Arbitration for Sport, in Chand v IAAF and AFI in 2014, ruled that the IAAF should decide what conditions should be placed on female DSD based on careful evaluation of scientific evidence. However the evidence was largely produced and published by medical managers and prominent members of the IAAF medical expert panel and has not been tested in a process of independent enquiry. It also remains difficult to scrutinise as the publication of the most recent manuscript is pending. Furthermore, the information seems to be based on non-voluntary endocrinological tests and performance data of elite and high-performance athletes in the female category, some from the era of doping.

While the simplicity of the rules will allow easier implementation, the assumption that “anything above female normal” values represent the level at which all females including partially androgen receptor insensitive and conversion enzyme deficient individuals will gain unfair advantage, remains unproven.

The choice of the 5nmol/L for eligibility is based on “normal female” values and on values produced by non-neoplastic ovaries. It presumes that all individuals with endocrine disorders who have any level of androgenising hormones will respond to androgens in exactly the same way that females without endocrinopathy will. This is based on research conducted on groups of female athletes with heterogenous diagnoses where performance and testosterone values were compared.

Although apparently based on differences in available data proving advantage, the list of restricted events appears particularly discriminatory. According to published data, women in the currently selected events with testosterone values in the “top tertile” had better performances than those in the “lowest tertile” even though these testosterone values were often within the allowed range under 5nmol/L.

How this data can be used to selectively regulate a few events, remain a huge question – if these are the events with stronger evidence of advantage in performance, the evidence for other events must be particularly poor. In addition, according to the IAAF documents, the advantage of elevated testosterone values among female athletes is based upon findings of increased muscle mass, muscle strength and haemoglobin levels.

It is very difficult to comprehend how these factors will influence performance in middle-distance running but not in field events or long-distance running. How do we explain these differences in evidence of advantage without casting serious doubt on the strength of existing evidence or, worse, on the intentions of the federation?

The ideal medical management (including regulation of sex hormone levels) of individuals with diagnoses listed as “relevant” by the IAAF whose gender choices do not correspond with IAAF regulations will raise questions about whether the IAAF regulations could serve to undermine ethical medical care. At the very least, it restricts medical and reproductive choices of individuals choosing to participate under these regulations. The suggested treatment options, including medical or surgical gonadectomy or gonadal suppression are probably not in the best medical and psychosexual interests of many of these patients. Long and short-term implications of hormone screening and replacement deemed necessary for eligibility in participation of sporting events must be carefully considered. The bioethical principles of beneficence, non-maleficence and respect for autonomy should be applied when making medical decisions and screening may detect previously undiagnosed DSD in young athletes necessitating further medical investigation and care.

The IAAF must therefore ensure that athletes are provided with appropriate counselling, medical support and resources needed should such a diagnosis be made as a result of the screening process. The traditional aim of hormone therapy for individuals with DSD is to improve general physiological health and well-being, long-term outcome and focus on development of sexual anatomy. Irrespective of aim, hormonal manipulation is associated with both risk and benefit while evidence of successfully reaching therapeutic goals remains largely absent. Athletes subjected to hormone replacement for non-medical indications must be fully informed of long-term risks and be monitored for possible adverse effects. It is therefore important that hormone therapy occurs in a considered and judicious manner.

Because the regulations in question have an aim to ensure fair competition, the issue of “fairness” should be considered.

The notion of equality among individuals is usually regarded as a limited proposition related to institutional equality of opportunity because human beings differ inherently in their unique biological attributes. Whereas we have previously discriminated between the biological attributes of men and women, and continue to do so when comparing the performance of athletes, we do not further discriminate between those who show biological traits advantageous or deleterious to being a successful competitor in the sporting environment; for example, there is no discrimination between thin and tall people compared to short, fat people when admitting individuals to competitions based upon long-distance running. Nevertheless, biological variability (although poorly characterised), would need to be considered a likely factor in the success of Kenyan runners competing in long-distance marathons.

The policy of categorising individuals into competitive groups based upon inherent ability is of ethical concern. Segregation of competitors into those deemed to be acceptable competitors and those deemed to be excluded on the basis of some inherent characteristic is not the same because it excludes certain human beings from a field of human endeavour simply on the basis of the biological lottery. That is pure discrimination and given our gregarious nature this is an action inconsistent with the way we ought to be with one another. Consequently, such actions invite moral judgement.

The matter of individual privacy is also important. There should be no more obligation on anyone to disclose information about themselves than any of us would wish to do so in respect of our daily lives.

It is understood that those seeking to enter a socially organised competitive event may be required to reveal aspects of themselves that others who decline such opportunities would wish to keep private. Boxers will reveal the “story of the tape” which describes their physique while others would most definitely not wish to have their weight and abdominal girth published in the public domain.

Notably, however, those asked to disclose information about themselves are treated equally in the sense that all such individuals seeking to participate in the same event are expected to accept the same level of disclosure. If the requirement for IAAF competitions requires that genotype, phenotype and endocrine profile become a matter of public record in order to gain access to sponsored competitions, then this criterion must apply to all similar competitors and must be seen to apply in exactly this fashion. Anything less would be a matter of discrimination.

Principle 6 of the Olympic Charter highlights the fundamental principles of non-discrimination and fairness. The standard of fairness should apply to all athletes. Any non-medically indicated intervention must be carefully considered and the scientific evidence for its extent and safety must be totally sound and beyond question. Should the IAAF decide to take the matter of hyperandrogenism further, it would need a great deal of careful and public consideration of how this could be fairly accomplished. DM