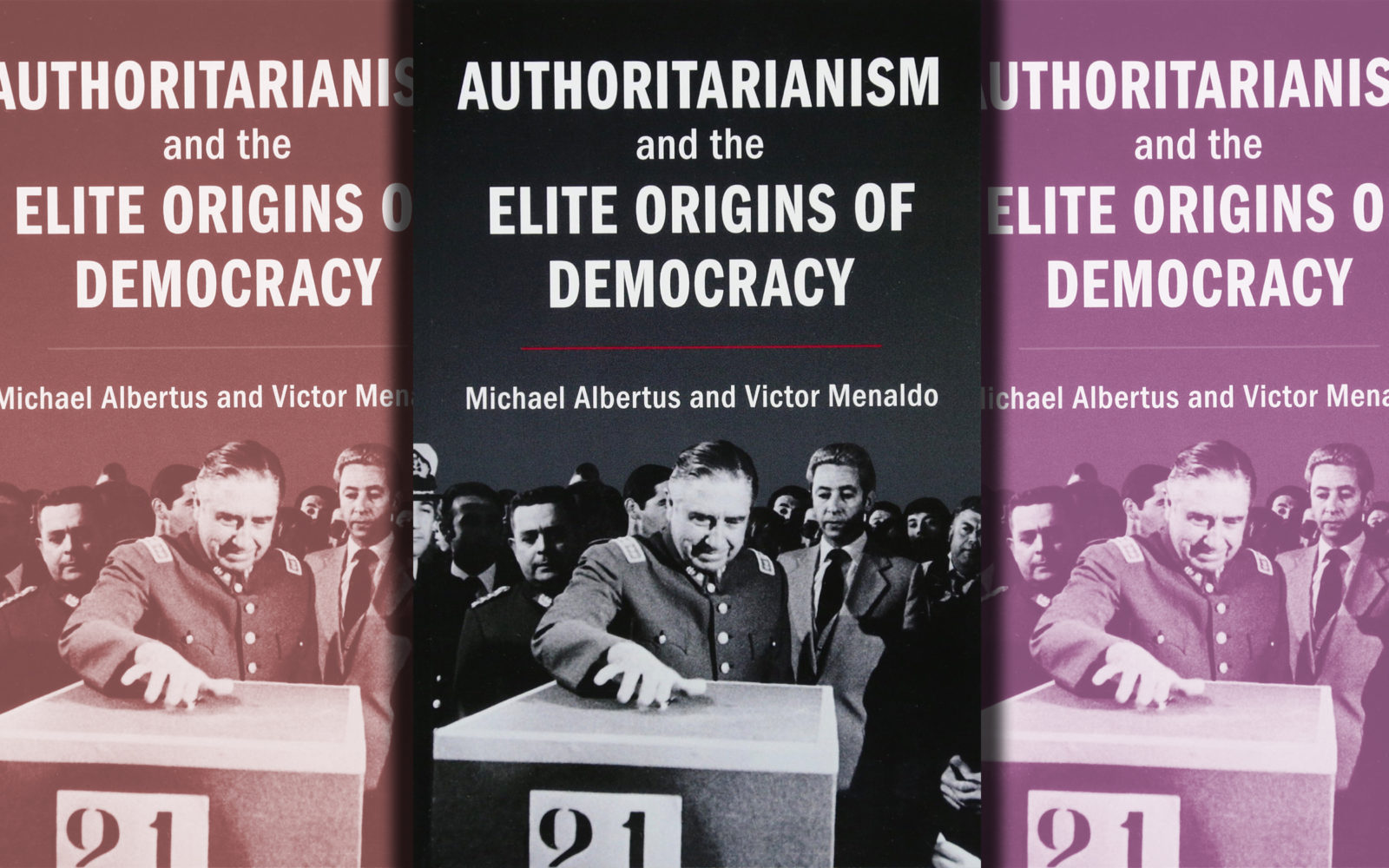 The South African Constitution has long been considered something of a political miracle – a symbol of racial reconciliation; a road map for a progressive and socially inclusive democracy. An essential new book, called ‘Authoritarianism and the Elite Origins of Democracy’, can help South Africans think their way through current assaults on the bedrock of local democracy. It is not a pretty read, but its findings are at least as important as Thomas Picketty’s ‘Capital in the 21st Century’ in terms of (re)framing our understanding of the crises currently facing governments the world over. By RICHARD POPLAK.

‘So the less said here concerning the ultimate nature of possible worlds and supermassive black holes in this our Godforsaken twenty-first century, the better.’

A cabal of bastards capitulates to pressure from inside and outside the country, following which democracy bursts forth from the ashes of the regime, borne on the wings of a constitution drafted under the glare of media klieg lights.

That the South African Constitution was an especially progressive document – that it led rather than followed in so many important respects (gay rights, for instance), that it afforded tens of millions of people the political dignity they’d fought so hard to attain, and that embedded in its language was an astonishing act of forgiveness – obscures the fact that it was not drafted by the people for the people (the classic, bumper sticker interpretation of democracy), but was instead the result of two sets of elites negotiating a mutually beneficial outcome at the expense of the people.

A stunning new book by the American-based academics Michael Albertus and Victor Menaldo blows the doors off the usual understanding of how democracies are shocked to life, and insists that South Africa’s elite-driven experience was by no means the exception. One of the principal architects of the Constitution, Cyril Ramaphosa, is now president of the country; since the advent of the democracy he helped design, he has become one of the richer men in South Africa. Albertus and Menaldo would argue that this is by no means a coincidence, but a consistent feature of political economies across space and time:

“Elite-biased democracy,” they write, “is a regime in which free and fair elections are paired with institutional devices that codify the rights and interests of the economic elites that were favoured under the former authoritarian period.”

And while that isn’t precisely applicable to the South African situation, Authoritarianism and the Elite Origins of Democracy starts out by employing Mzansi’s narrative as a primary example of an elite-biased democratic formulation. The book would be relevant regardless of when it was published, but it’s especially vital during this age of democratic meltdown, where the causes of rising authoritarianism are attributed either to its symptoms – “populism!”, or the tools of its dismantling – “fake news!”.

Albertus and Menaldo make the counterintuitive claim that the majority of modern democracies are not undercut by rogue authoritarians in their midst, but are instead authoritarian by design. In a terrible line that we should all have tattooed in reverse on our foreheads, they write:

“The very DNA of most modern democracies is authoritarian in nature.”

That’s a huge pill to wash down with a flagon of moonshine, but Albertus and Menaldo have amassed the data with which to back up their assertions. Much like Thomas Picketty, who pored over centuries of tax records in an attempt to prove that the current era is one of rising and catastrophic inequality, the academics have created a bespoke dataset, in their case dating back to 1800, detailing the mechanics behind modern constitution-forging.

Based on their research, they’ve come to the conclusion that “a total of 66 percent of new democracies inherited a constitution that was designed under dictatorship and where outgoing elites dominated the transition process. Chile, Turkey, South Africa, Indonesia, and Thailand illustrate this more common scenario”.

Indeed, from 1800 to 2006, only 34% of new democracies kicked off with a constitution that was created without input from authoritarian elites, or was a holdover from a past episode of local democratic rule.

An immediate weakness in their theory presents itself: constitutions, like any legally binding document, derive their authority from precedent. It therefore goes without saying that one constitution will read very much like another. But when it comes to clauses that were a) were crafted with the input of authoritarian elites during transition from dictatorship to democracy and b) are clearly beneficial to elites while proving harmful to the bulk of the population, they’ve identified a chilling amount of overlap.

Does any of this sound familiar?

“.. .skewed electoral rules, checks and balances designed to impede major policy changes instead of to promote accountability, supermajority thresholds for constitutional change that make it nearly impossible to withdraw advantages bequeathed to elites, selective political party bans, strong forms of federalism, and limits on the popular initiation of legislation.”

Such correctives to popular rule are imbedded in many constitutions that have followed authoritarian rule.

Oh, and here’s one that’s particularly relevant in the South African context — name a recent constitution that doesn’t include “strong protections for the status quo distribution of private property”.

In a country like this one, which required a redistribution of wealth along racial lines in order to introduce any measure of post-transition economic fairness, such a clause instead ensured that wealth remained in the hands of the apartheid elite, to be redistributed according to how they saw fit. The argument is an old and an obvious one: mess with property rights and the economy goes down a South African school pit latrine. But the results are just as obvious: there are South African school pit latrines a quarter of a century after democracy’s advent.

Albertus especially understands how the particulars of redistribution impact on democracy, having written the award-winning Autocracy and Redistribution: The Politics of Land Reform (Cambridge University Press, 2015). Leveraging original data dating back to 1900, he examines land reform in countries such as Egypt, Peru, Venezuela, and Zimbabwe, and finds — drum roll! — that land reform is far more prevalent during dictatorships. Despite the fact that literature dating back to Aristotle holds that distribution “should be both higher and more targeted at the poor under democracy”, the data simply does not bear this out.

South Africa, of course, is a splendid case in point, considering that the white beneficiaries of colonial and apartheid-era land reform continue to hold the bulk of arable land, in no small part thanks to the constitution their benefactors helped draft.

But why would the winners of a liberation war concede the design of democracy to an elite that, however entrenched, is surely at its weakest point during the transition period?

First, Albertus and Menaldo identify rifts between — not against — elites as “key drivers of political change”. (Think “liberal” Afrikaner bluebloods like the Ruperts facing off against hardcore conservative nutjobs like PW Botha.)

Second, in order to allay fears of a civil conflict that could damage both sides irreparably, incumbent elites often smooth over the rhetoric they employed during the liberation struggle. (Mandela, obviously.)

Third, if there is no such thing as an ideologically or economically united elite, a united opposition is even scarcer still, and the jockeying for position starts the minute the dictator’s statue is toppled in the main square.

As Albertus and Menaldo point out, in an inadvertent echo of Franz Fanon, democracy often starts as a collaboration between an elite group looking to further leverage their position following transition, and an incumbent elite (often leaders of a liberation movement) who hope to gain the commensurate economic and political influence under the democratic dispensation. How is this alignment forged? Through a deal, of course — one that in South Africa’s case was forged between the old guard and the rising elite within the African National Congress, who helped devise an empowerment scheme that ended up creating a racial mirror of apartheid.

Another conceptual stumbling block presents itself: how likely it is that elites would support a transition to democracy when your average strongman provides a supportive environment for corruption, parties with underage prostitutes, and gunning down striking miners. Albertus and Mendola’s data, however, suggests that life is often better for elites under democracies of their own making. After all, elections are always can often be bought. Nor are highly educated, cosmopolitan billionaires always cool with the behaviour of gauche authoritarians, and they often find that due process and rule of law are far more stabilising than the whims of a man who wears oversized epaulets and shoots ICBMs out of his ass. Elites don’t roll over and play dead, and nor do they magically mellow to free and fair elections following a binge-watching session of The West Wing.

“Instead, [during transition] they work to shape their own destiny in ways that will benefit them both today and in the future,” write Albertus and Menaldo.

As democracies progress, and as they calcify into machines that provide franchise to a population subsisting on the bare minimum of social welfare handouts, the wheels begin to come off. This is happening around the world, and it is happening in South Africa. The populist response to elite driven democracies — Jacob Zuma (when he could muster the effort) and Donald Trump, to name just two — are merely versions of authoritarianism, railing as they do against “the swamp” and “rigged” institutions like the judiciary, while trying to re-rig those institutions for their own benefit. But heed the fruits of Albertus and Menaldo’s research: these men rise not despite the constitutions they are hell-bent on undermining, but because of them.

It’s possible to draw some very dangerous and nihilistic conclusions from Authoritarianism and the Elite Origins of Democracy, or failing that, blow one’s brains out. Albertus and Menaldo would likely advise against both options. The key is to think of constitutions as living documents, and democracies as mutable systems. (As North Korea is currently reminding us, dictatorships can be remarkably quick on their feet, while technocracies move at the speed of a Tarkovsky retrospective.) Sweden’s constitution was cobbled together by some of the more ghastly, Satanic Euro-toffs imaginable, and yet over time the country has evolved into one of the most progressive and equitable in the history of our species. The maturation of a democracy should not be about constitutional calcification, but rather a constant revisioning of its dictates.

In this, the looming amendment of the South African Constitution’s Section 25, to include the expropriation of land without compensation, should be lauded as the beginning of the beginning rather than the beginning of the end. If the country’s elites are howling, that is to be expected — the whole thing was built for their benefit. And, of course, the amending of a constitution should be equally as fraught as its initial drafting — democracy should never be a matter of statis, but one of constant vigilance, innovation and restlessness.

This, Albertus and Menaldo might argue, could be South Africa’s way out of the fathomless pit latrine: our founding document is not written in stone. As the legendary critic Lionel Trilling noted:

Why journalism matters. The challenges have changed, but has its core purpose?

Speaking truth to power: A free press is the lifeblood of democracy