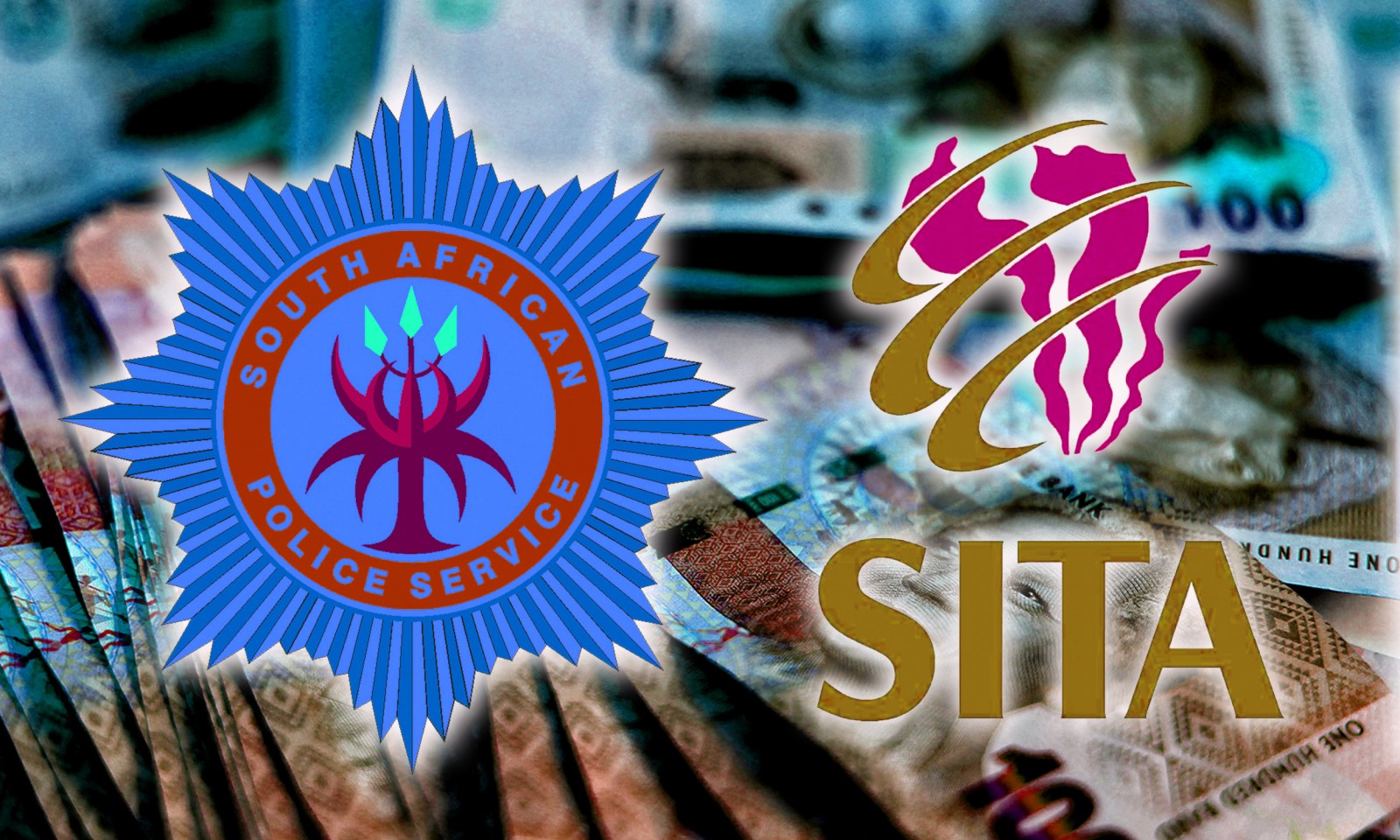 While some might claim that the violent, white right-wing extremist group, the Boeremag, was a creation of Crime Intelligence aimed at drawing out into the open a right-wing threat to democratic South Africa, the fact remains that those recruited were more than ready to resort to violence. In 2008/9, SITA employees communicated with jailed Boeremag-accused, André Tibert Du Toit, using SITA government-issue computers.

This analysis is part of a series unpacking the contents of an in-depth forensic investigation into SITA and SAPS. (Read Part 1 here and Part 2 here)

Until the Boeremag made it back into media headlines earlier in May after a forensic investigation into industrial-scale corruption at SITA turned up personal emails sent by SITA employees to a Boeremag accused in prison awaiting trial, no one had, quite frankly, heard of “Boervin Boer Nation Freedom Initiative”.

Boervin, which describes itself as “a registered Non-Profit Organisation” with the main goal of achieving “freedom for the political prisoners of the Boer Nation”, issued a press release attempting to justify and explain email communication between André du Toit and his friends in SITA, Banie and Rachel Venter, while awaiting trial in 2008/9.

“It is common knowledge that Mr André du Toit had been friends with various members of SAPS and SITA due to him being a former employee of both SAPS and SITA since the ‘90s. Some of his former colleagues, also being his friends, brought him food during the ‘Boeremag’ trial from 2003 – 2013,” a media release by Boervin explained. 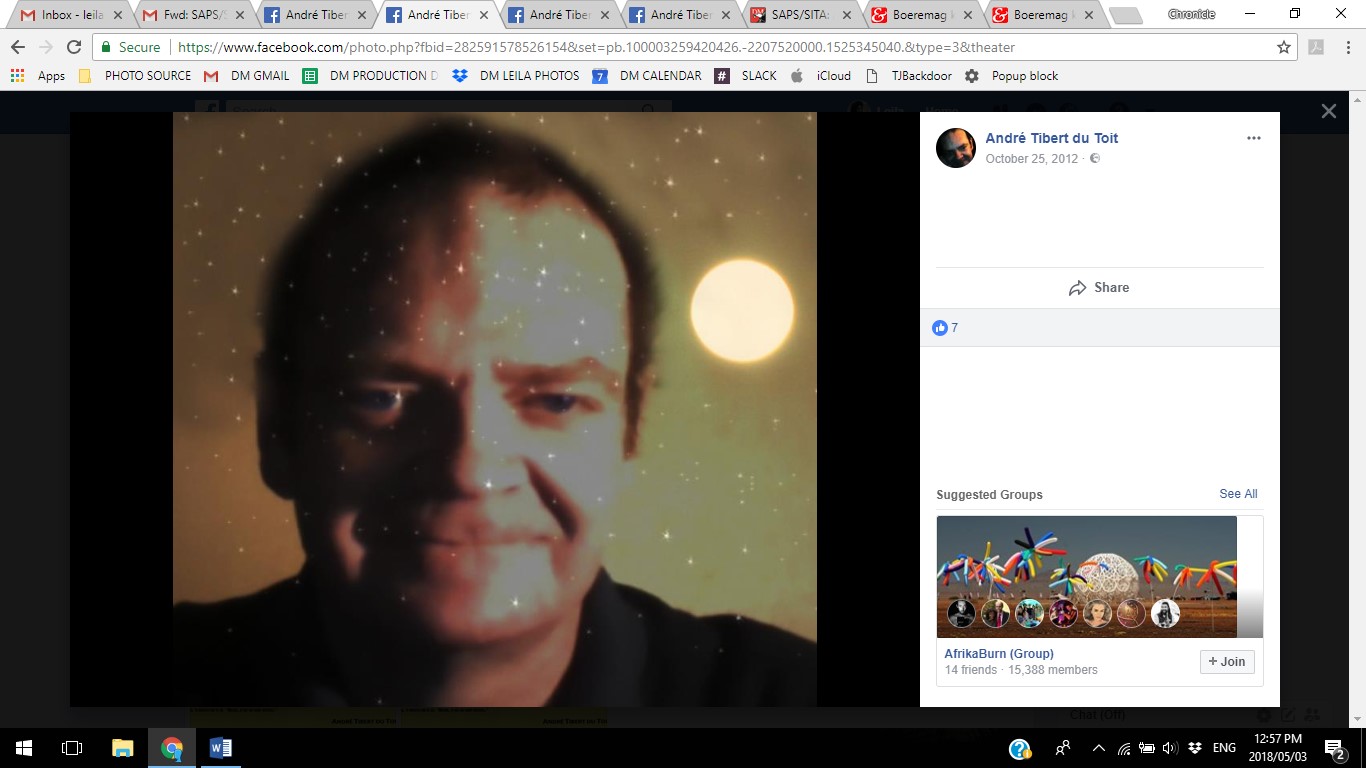 Du Toit, said Boervin, “lost everything while awaiting the imposing of his sentence for almost 11 years. Du Toit was only sentenced in October 2013 for an additional 20 years along with the other ‘Boeremag’ victims who received various sentences.”

Just to recap. While Boervin claims that the Boeremag was a Crime Intelligence project, it is a matter of fact and record that the bombing spree that the Boeremag embarked on in 2002 cost Soweto mother Claudia Mokome her life and also caused around R2-million worth of damage to commuter railway lines. 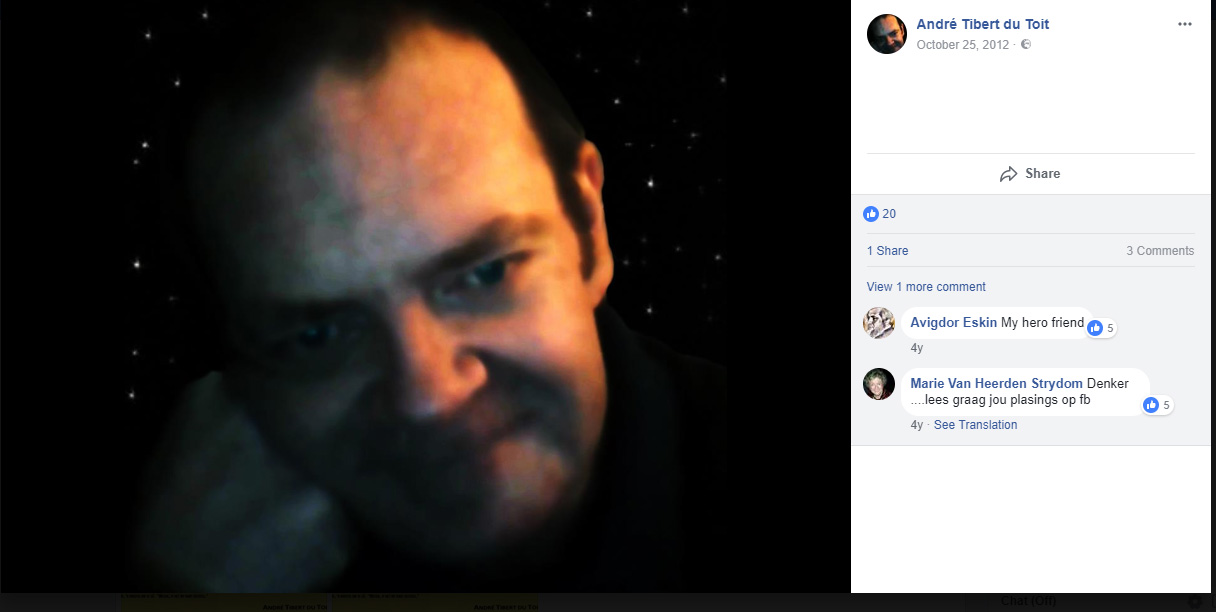 “Innocent citizens were recruited with a threat of violence of black people against white people and a provocation to organise themselves within a defensive structure to defend themselves against such threat.”

It was Crime Intelligence (CI), claims Boervin, who “planted agent provocateurs to steadily change the plans from defensive to offensive. The reason for this was that Crime Intelligence could ‘unmask’ a bigger right-wing threat in order to have more access to the secret funds.”

If it indeed was, as Boervin suggests, a covert operation by CI to smoke out right-wing extremists, they fell for it and are now safely behind bars. 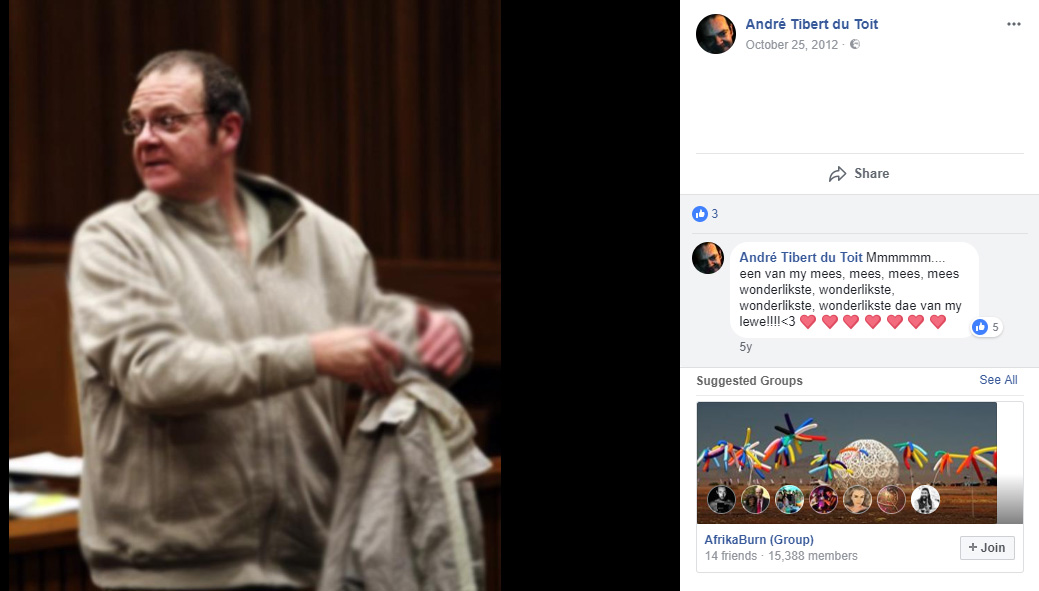 Boervin justifies the communication between the Venter couple and Du Toit by saying “some of his [Du Toit’s] former colleagues and friends made contributions towards his basic needs such as buying him telephone cards. According to Boervin’s knowledge, Du Toit had last contact with friends on Facebook and e-mail in October 2013.”

Du Toit had, at the time, says Boervin, “obtained legal access to the internet through a court application”.

The organisation has charged that the “ghosts” of the Boeremag were being chased as a “consequence of a task-less ‘right-wing’ reactionary desk of Crime Intelligence, trying to prove the purpose of their existence in order to keep their jobs during an era where there is no right-wing threat”.

The Boeremag, says Boervin, was “disbanded 16 years ago”.

Daily Maverick has come by some of the emails between Rachel and Banie Venter and a woman, Jolanda Potgieter, who acted as an intermediary for Du Toit with regard to collecting money, flash drives, CDs (Kris Kristofferson and German trio No Mercy) and various food treats including tinned tuna, sardines and bully beef, vienna sausages, cheese, coffee, bread and steak and kidney pies.

Potgieter, in May 2009, reports to the Venters and others that Du Toit is holding up well but that he has lost weight. She informs them that a “trust” that has been set up for the Boeremag accused has “dried up” and that it had become difficult to secure “sponsors”.

“Ek weet dat hy nie eintlik in die eetsaal gaan eet nie omdat daar voorheen aan hulle kos gepeuter was,” writes Potgieter. (I know that he no longer eats in the dining room because his food has been tampered with in the past.)

Du Toit wrote to Rachel Venter in 2009 while she was employed in SITA’s Infrastructure Provisioning division, referring to her by her nickname “Ogies” (little eyes). 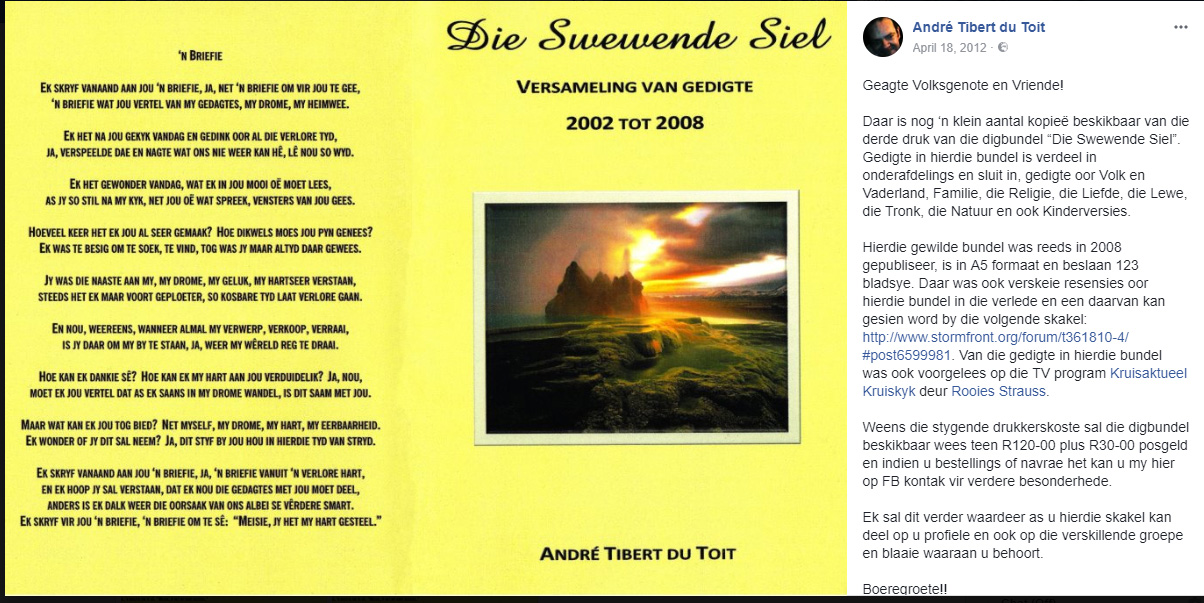 By then he had spent eight years awaiting trial in his “luxury hotel” and bemoaned the fact that “the end is still not in sight”. He writes about scanning photographs of his SITA colleagues, his children, and refers to a benefactor in Belgium who has promised to send funds.

Writing about “those who decided to turn against the others by acting as state witnesses”, as Boervin described them, Du Toit opined (translated from original Afrikaans):

“If I can remember correctly, accused 11, Tom Voster, was testifying the last time you visited. In the meantime, Dirk Hanekom, of the Free State, testified and changed his version at the last minute. During cross-examination he came with the story that he was, in fact, part of the plan to stage a coup d’état. Afterwards the police immediately removed him from our section and began to hold and transport him apart from the rest of us.”

Du Toit added that after Hanekom had testified:

“… the police washed their hands of him and he was back with us, in the same cell and being transported in the same cattle truck. They only used him and he was stupid enough to fall for their promises. At present he enjoys longer visits than the rest of us…”

Dr Lets Pretorius, a medical doctor who was sentenced later to 30 years, 10 of them suspended, on charges of High Treason, as well as Frik Botman – both from the then Potgietersrus (now Mokopane) – had testified after Hanekom.

“I think Jurie Vermeulen, also from the Free State, will begin testifying tomorrow and I can already predict that he will come with the same stories as Dirkie. The current Free State is a blot on our history. If Christiaan de Wet (Boer rebel leader from the Free State) knew, he would turn in his grave like a wagon wheel,” writes Du Toit.

Du Toit signs off with “baie liefde en Boeregroete, julle eie Baardbek (sonder n baard), ook bekend as… Tibert die Tronvoël (dit rym)”. (Lots of love and Boer greetings from your own bearded one (without a beard) also known as Tibert the Jailbird). 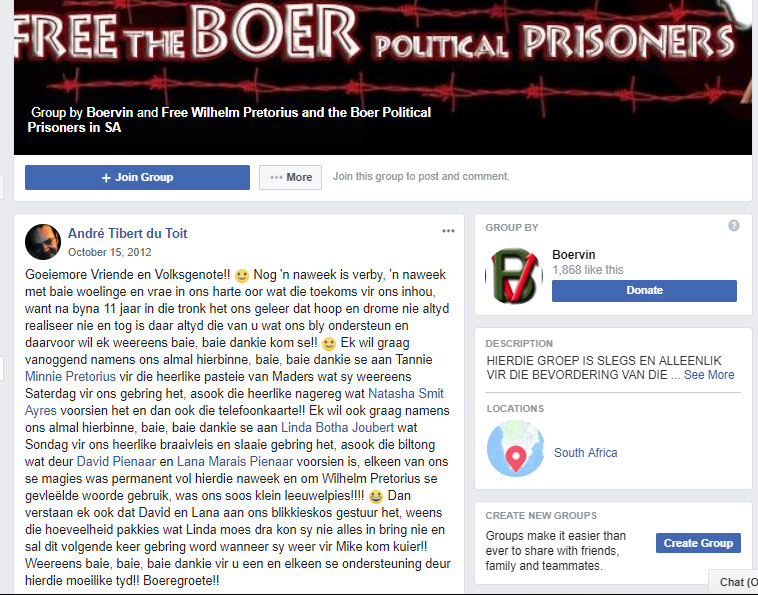 It is clear, however, from the banal content of the emails, that there was indeed no plot to infiltrate SITA or capture the agency from behind bars. What these communications do indicate is that SITA employees at the time were sympathetic to Du Toit, a former colleague, as well as his right-wing ideological persuasions.

Du Toit pleaded with his former colleagues to help find him weekend work should he be granted bail. There are also long and detailed discussions about cattle breeds and farms. Banie Venter ended up renting a farm which belonged to Du Toit’s mother before later purchasing his own farm, under what has now been flagged as a suspicious transaction.

One of the key figures driving the gargantuan clean-up at SITA is ICT sector veteran, CEO Dr Setumo Mohapi, who has stared down various threats from inside and outside the agency in his attempt to plug the haemorrhaging of the agency’s funds to corruption. He is working alongside other agencies including IPID, SAPS, Treasury and Scopa.

SITA is responsible for an annual procurement spend on behalf of government departments of around R2-billion.

Mohapi, former CEO of Sentech, has acted decisively, firing and suspending SITA employees who have been implicated in the fraud and corruption. He has also handed evidence to the Hawks for further criminal investigation. For this, he told Scopa, he had received death threats, but remained resolute.

“If you have been stealing, we will find you. When we find you, we will then discipline you. And if you go through that process (and are found guilty), we will fire you,” Mohapi told journalist Duncan McLeod. DM