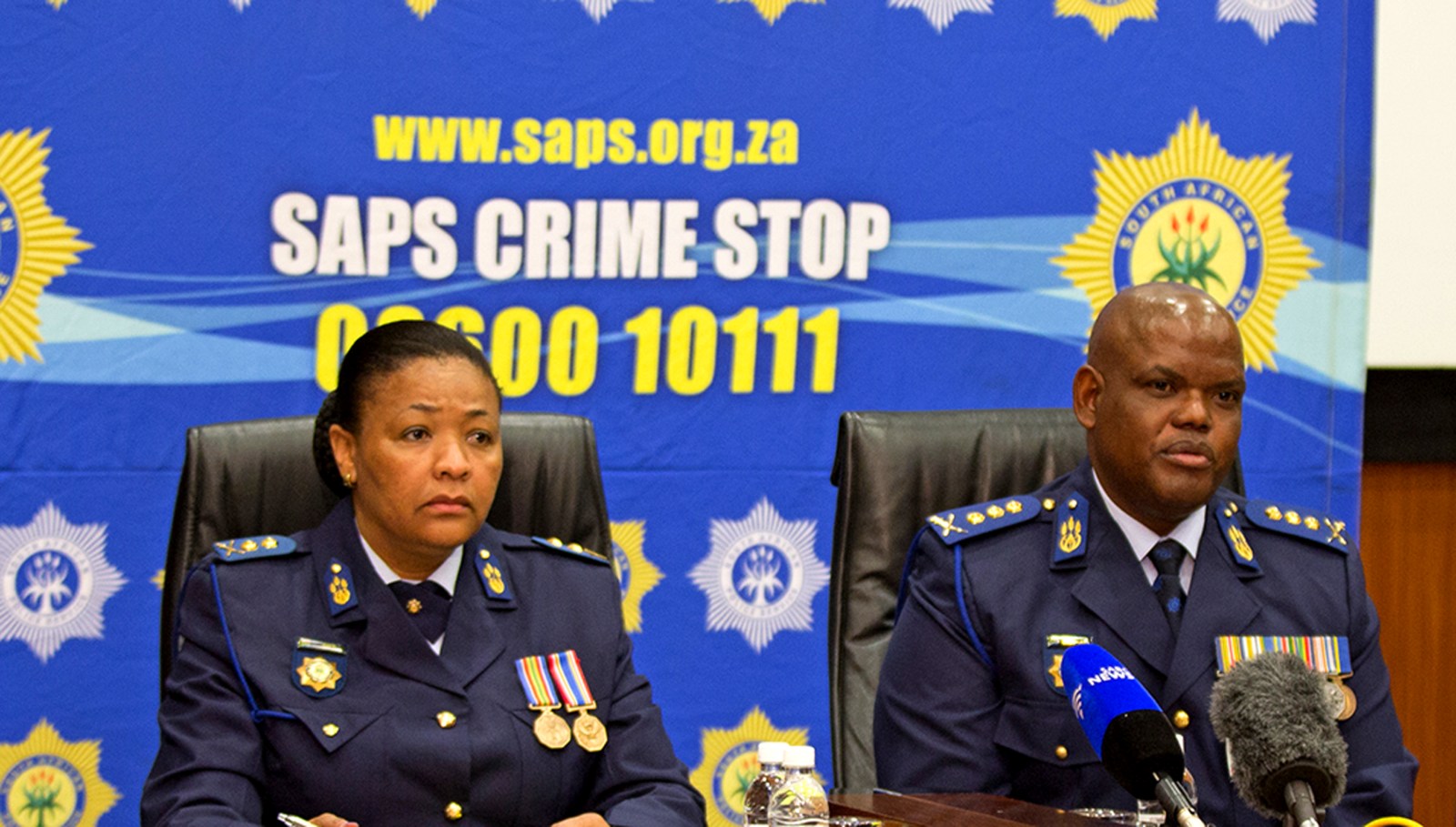 SAPS technology management service head Lieutenant-General Adeline Shezi is under investigation for alleged corruption by the police watchdog, the Independent Police Investigative Directorate. Scrutiny of this police division intensified after a photo of two staffers attending a Manchester United football home game courtesy of IT companies with police contracts blew the lid off dodgy dealings. It signals the unravelling of vested interests for gain in procurement.

The dust had barely settled over the controversial but ultimately over-ridden switch-off by Forensic Data Analysts (FDA), in the private company’s pay dispute with the SAPS of key police information technology systems for property and exhibit management and firearm permits, when the allegations arose.

On Thursday the Independent Police Investigative Directorate (IPID) confirmed it is investigating corruption allegations against technology management service head Lieutenant-General Adeline Shezi. And the SAPS confirmed its national police commissioner had requested internal investigations into this matter. Shezi told Daily Maverick she had not been formally informed or charged, but has been called to human resources:

“They’ve made an appointment for Monday.”

In the world of procurement, contracting connections are frequently obscured, and it can take years before corruption, fraud and mismanagement emerge and are unravelled, even when constitutional oversight bodies such as parliamentary committees get involved over deep concerns about police’s contract management.

Often an intricate convergence of actors, incidents and issues creates a perfect storm. This became clear in the parliamentary State Capture at Eskom. In the SAPS technology management service contract saga it involves FDA, headed by former police officer Keith Keating, which since 2010 obtained contracts valued at R5.1-billion and the connected company, Unisys, that is represented by Jerenique Bayard. Keating is publicly linked in IPID investigations to former acting national police commissioner Khomotso Phahlane, himself under investigation for corruption and fraud by the police watchdog over how he financed his home and vehicles for himself and his wife Brigadier Beauty Phahlane and Colonel Johann Potgieter, both of whom are working within the police’s technology management service division.

FDA’s relations with SAPS technology management service popped up on IPID’s radar while investigating Phahlane for dodgy dealings with forensic chemical supplier Kriminalistik and Crimetech. These technology contract probes also include for the supply of Rofin forensic torches, as Daily Maverick previously reported.

It appears that police forensics chiefs like to have house upgrades done at others’ expense. Like Phahlane, Shezi is now fingered for allegedly using outside money associated with SAPS contractors for house construction.

Documents seen by Daily Maverick on what is dubbed “Project Khulisa” reflect a series of payments totalling R2,177,572.47 from mid-2015 to early 2016 to a construction company for building a house for Shezi. These payments include two by Shezi, totalling R614,513.72.

One of the contributing companies, Intsika Distributors – it made three payments totalling R793,059.75 on one day in July 2015, according to the document – is linked to Unisys’ Bayard. Unisys is contracted to FDA and was publicly named as the sponsor of the October 2011 trip by two TMS police officers to the Manchester United game at Old Trafford, together with Keating and Bayard.

It was DA MP Tim Brauteseth who blew the lid off this Pandora’s box at a meeting of Parliament’s public spending watchdog, the Standing Committee on Public Accounts (Scopa), in November 2017.

The formal SAPS confirmation of the Old Trafford trip came on 28 February 2018 after prodding by Brauteseth. SAPS Deputy Commissioner for Resource Management, Lieutenant-General Stefan Schutte, told MPs the trip was “official” and the ManU game tickets were bought by “someone in Unisys”. The customised soccer club T-shirts were bought by the police members, according to Parliamentary Monitoring Group (PMG) minutes.

On Thursday Brauteseth said the new claims “should leave no doubt whatsoever that the relationship between Unisys and Shezi is completely corrupt and criminal in nature”.

It was common cause that FDA subcontracted to Unisys on some of the SAPS contracts in question and this, he said, drew into question the involvement of FDA in irregular activities.

“The DA in Scopa will not be daunted in our pursuit to expose these irregularities and to hold those responsible accountable. We also call on the Hawks to act without delay against Shezi and Bayard in relation to the payments made for the construction of Shezi’s residence,” added Brauteseth.

The SAPS since November 2017 has come under pressure not to pay the FDA contract for property and exhibit management and firearms permits after Scopa was told of concerns over their legality – and to clean up its contract management. Both Scopa and Parliament’s police committee are on public record that they will deal with this saga again in June.

The report, State of Procurement Spent in National and Provincial Departments, tabled by Finance Minister Nhlanhla Nene in Parliament last week, shows the SAPS is the largest procurer among national departments. It was responsible for R17.8-billion of the R79-billion spent on procurement nationally in the 2016/17 financial year. And as the FDA saga, also involving Unisys, alongside the IPID probes show there is scope for abuse.

With probes into Shezi under way, there appears to be an interesting further twist. From 2012 she was acting head of the police’s laboratory services quality management at a time when Phahlane headed the forensics division. In May 2014 she moved to the SAPS technology management service, where her initial acting appointment was confirmed into a permanent one from February 2015, with a rise in rank, by then national commissioner Riah Phiyega, according to an official SAPS statement on its website. As technology management service boss, Shezi would have signed off on any contracts.

From forensics, Phahlane in October 2015 was appointed acting national commissioner, a post he held until June 2017 when his departure was officially announced, despite his dismissal of any wrongdoing amid an acrimonious stand-off with IPID, including police counterinvestigations of the police watchdog.

“I can confirm that we are investigating General Shezi on allegations of corruption. At this stage we cannot get into the details of the investigation.”

However, it is reliably understood that IPID recently shared its initial findings with the SAPS, and it was this that triggered national police commissioner Lieutenant-General Khehla Sitole to request internal proceedings against Shezi.

There is a shimmer of a silver lining in this technology management debacle. FDA’s switch-off of the SAPS property and exhibit control and firearms permit systems has effectively been reversed without having to resort to legal action as was mooted in a joint SAPS-SITA statement earlier in April.

SAPS spokesperson Brigadier Vish Naidoo on Thursday confirmed that “the systems are all up and running”, as did SITA spokesperson Stera Senti.

“FDA did not have a contractual right (for the shutdown). SITA has a perpetual right to usage,” he said, adding that SITA had put in place long-term plans for SAPS technology.

It’s understood the FDA contracts are set to expire in June. DM