The Road to Mecca: Illuminating the shadows within – Fugard’s classic burns with meaning 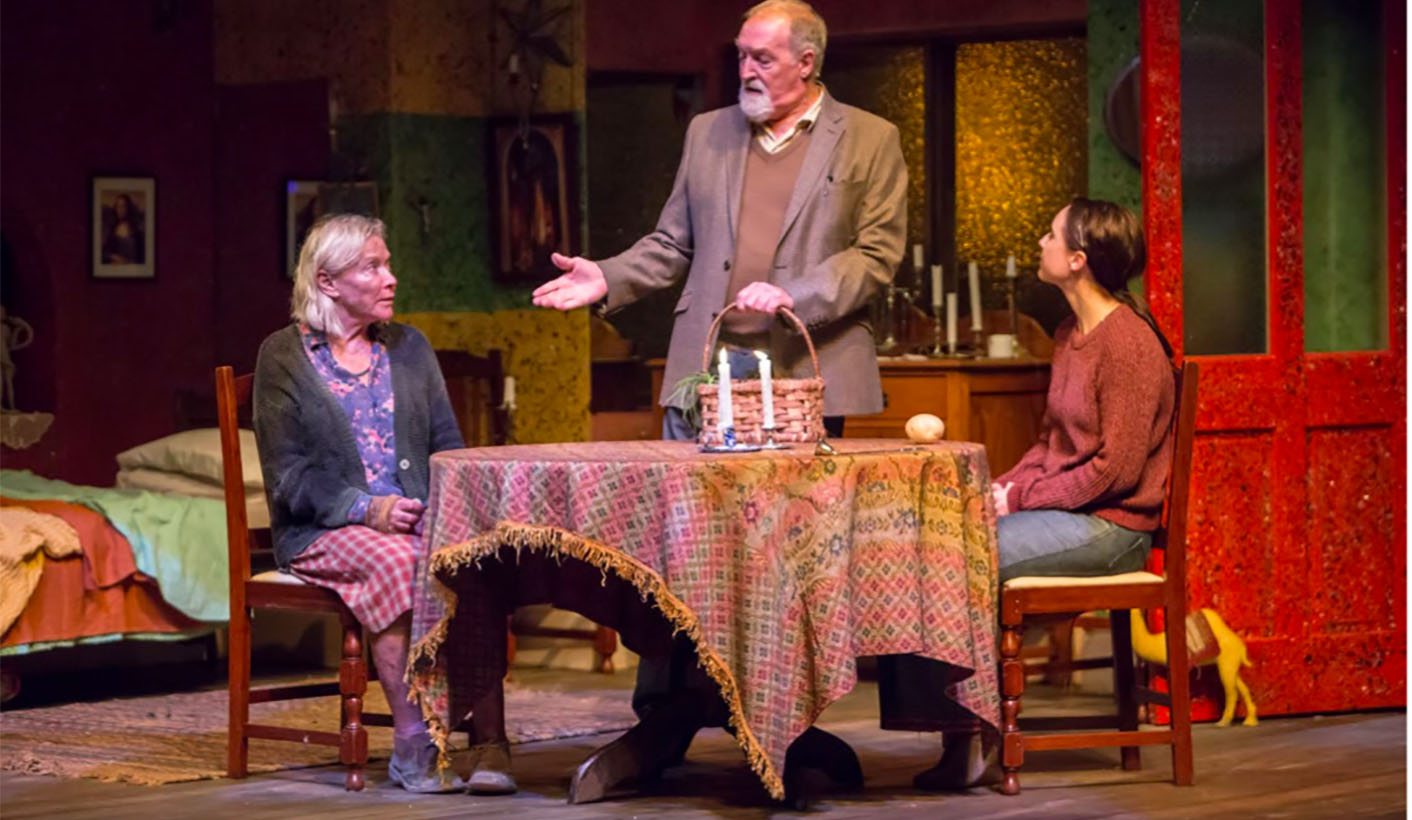 The literary genius of Athol Fugard, one of the world's greatest living playwrights writing in English, is that his thoughts, words and the characters who contain these, transcend time, history, space and the physical world. In this transcendental space, Fugard offers universal truths about life, death, despair and defiance. The current Fugard Theatre production of The Road the Mecca, celebrating Fugard’s 85th birthday and featuring Sandra Prinsloo and Marius Weyers, lands in the midst of an ever-changing and evolving political milieu of rejection, reclamation, restoration and illumination. By MARIANNE THAMM.

On her way to visit Miss Helen Martins (played by Sandra Prinsloo), holed up in a world of her own creation in the Karoo dorpie of Nieu-Bethesda, teacher Elsa Barlow (Emily Child) passes on the dusty, deserted road, a lone, black woman with a child on her back. The nameless woman, we learn, is dispossessed. She has been banished, excommunicated, hounded from her home on the farm where her husband, who has died, once laboured.

In this 21st Century staging of Fugards’s play, penned in 1984, it is this nameless and unseen black woman who claims a space, who demands to be seen even though she is on the periphery of this slow-burn existential drama about life and finding meaning in a hostile, frightening, small world.

The woman, her baby, and their possible fate recur in the drama as the two other central female characters, Miss Helen and Elsa, struggle to find their own space in a world governed by laws – all man-made, be they political, social, cultural and most important in Miss Helen’s case, religious (not spiritual).

There is a fourth woman, also unseen, in the play.

Katrina is Miss Helen’s occasional domestic worker and the wife of Koos, the man who helps Helen construct her magical camel yard. Katrina too is at the mercy of a world and a system that does not see her. Her existence dependent entirely on that of her husband, she, like the other women in the play, apart from Miss Helen, has no agency. The only agency Miss Helen has is in creating a completely new world around her. So much so that she is shunned and shamed for it by the rest of the white community around her.

But it is also a world that Miss Helen could not have made visible without the help of men, the black men whose labour she needed to accomplish the physical drudge of mixing cement and twisting taut wire into texts threaded through the fence surrounding her sacred place.

The thing about great literary works is that they stand the test of time. They are rooted in insights and truths that are universal, ever-present and speak to contemporary existence through this deep connection with human experience in the physical realm.

While this, one of Fugard’s most beloved plays, is most certainly based on fact and the real life of outsider artist Helen Martins, her magnificent Owl House on the Western outskirts of Nieu-Bethesda and her real-life friendship with Jill Wenman, they serve as vehicles for Fugard’s exploration of the search for meaning in life, particularly by those gifted (or some would say cursed) with the key to the trapdoor – the mind and soul of the artist.

The literary landscape of The Road To Mecca is not only Miss Helen’s search for light and freedom but also apartheid South Africa, its heaviness, its blind intolerance and its mind closed to consciousness, understanding and compassion. It is an ideology as dry and as corrosive as the arid terrain in which Miss Helen and all the other characters find themselves.

This 1970s South Africa, where the drama unfolds, is a morally compromised and corrupted space masquerading as an enlightened one, guided by the dim light of fundamentalist Christianity.

Fugard’s plays feature classic verbal building blocks – or an infrastructure – that slowly and at times laboriously begin to construct the world we are entering.

The play begins when Elsa, superbly played by a nervous, exasperated and exasperating Emily Child, arrives after receiving an alarming letter from her old friend. With Elsa arrives the outside world, her struggle to teach in a world that does not value knowledge.

And as the sun sets and the candles are lit we become aware that Miss Helen’s inner luminosity is diminishing. Her world is darkening and growing smaller as the local community, as represented by the dominee Marius Byleveld (Marius Weyers), would like to see her exiled from the world and the home she had created to spend her days in an old age home.

Prinsloo and Weyers have a long, long history on South African stages, alone and together. It is a partnership that has seen these iconic actors play opposite each other in a myriad productions and it is this long association that underpins the apparent ease each actor brings to their role in this intimate space.

It is a familiarity and “knowing” that nourishes the characters and their interactions – small glances, little gestures, long stares – are all pregnant with meaning. Weyers is commanding, tall, bear-like, a seemingly cheerful and concerned do-gooder, cajoling, condescending, manipulating Miss Helen to give up her freedom. It is a freedom that the rest of the community she lives in cannot tolerate as it threatens them. Weyers brings to the part a genuine sense of a man who thinks he is doing the right thing rather than a brittle patriarch imposing the will of the church.

In creating her own freedom, Miss Helen is ultimately viewed as defiant, ungovernable – and it is this thread that ultimately triumphs in the end.

Prinsloo brings to this Miss Helen a vulnerability, playfulness and luminosity that at first serves to disguise her existential crisis. Here Miss Helen, in this final stage of her life, feels less earthbound, as if she has somehow already gone, is if she knows she will soon dance among the particles of her glittering, light-filled home and densely populated garden.

This production is directed by Fugard Theatre resident director Greg Karvellas who has tightly contained the action and the pace, particularly in the second act where Fugard gets his characters to soar through what has been slowly set up in the first.

Saul Radomsky’s magnificent set captures the love and light of Miss Helen’s real Owl House, bringing to the stage a slice of the physical realm in this spiritual exploration of self. Of course a play about light needs the touch of a lighting maestro and here Mannie Manim has brought, once again, his considerable talent and vision.

The Road to Mecca is a South African classic and it is a rare treat to see it performed in the 85th year of the playwright’s life. It is a story not only of our political past but also of our present. It is a story of how shadows need light and how they are always just one step away. DM