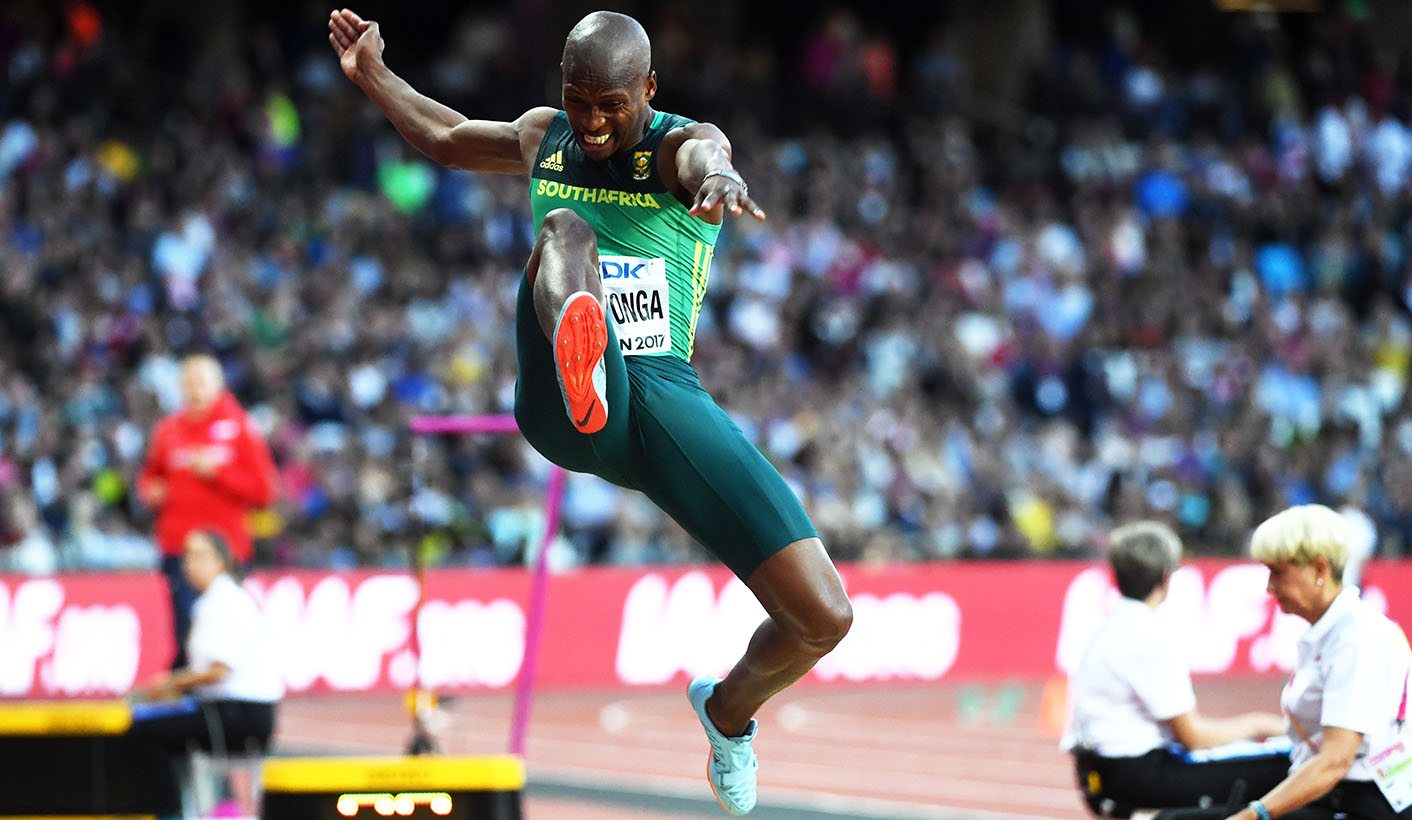 Luvo Manyonga leaped to a Commonwealth Games record on Wednesday, adding to his silver from the Olympics and his World Champion title. Undoubtedly one of the best long jumpers the world has ever seen, he continues to redefine his legacy. By ANTOINETTE MULLER.

On Australia’s Gold Coast on Wednesday night, Luvo Manyonga did what he does best: broke records, entertained and grabbed gold.

At the time of writing, it took South Africa to 25 medals.

His fellow jumper Ruswahl Samaai took the bronze, but the night belonged to the Master from Mbwekeni – and the result wouldn’t have surprised anyone.

Yes, even those with just a passing interest in athletic field events will have heard his name. And they will continue hearing it because Manyonga is a phenomenal athlete who could well become the first man in the history of the sport to break the 9m-mark.

While he was some way off from that feat on Wednesday – 8.41m was enough to win it in Australia – he has proven more than once that he will be remembered as one of the best athletes in this pursuit.

And he always does so in style. Be that by virtue of his two differently coloured boots or his swagger or his infectious smile, Manyonga always finds a way to deliver.

The over-excitement sometimes leads to a few technical errors with his jumps, but he always makes up for it. En route to gold, he broke the Commonwealth Games record twice – and hardly broke a sweat

His technique is so mesmerizingly smooth that it’ll convince even the most athletically challenged among us that it’s an easy thing to do.

Of course it’s not – and for Manyonga, the challenge to get here has been filled with adversity – something commentators on his event were quick to remind everyone of.

That narrative is something that dominated the conversation since leaping to silver at the 2016 Rio Olympics.

All anyone wanted to talk about was his past.

In part, it’s fair enough. Manyonga’s story of overcoming addiction is inspiring and testament to what we all want not just from sport, but from humanity.

In the South African context, especially, Manyonga’s story is so powerful, because the drug that so nearly consumed him – tik as it is colloquially known, or meth – is pervasive and destructive.

But the narrative that often dominates Manyonga’s athletic success is also frustrating. Since that silver medal, he has added the title of World Champion and a national indoor long jump record to his tally.

Sometimes, what has been instead of what will be for the long jumper dominates the conversation – a frustrating segue when there is so much to admire about him as an athlete.

Yet, Manyonga doesn’t seem to mind at all. He has become outspoken about his battles and in Rio back in 2016, Manyonga said he was “so close to death” during his battle with addiction.

That he is so comfortable to speak about his struggles and his journey is further testament to his character.

That he keeps redefining stereotypes is a reminder of what is possible – not just for him as an athlete, but for those who find themselves in the same sink holes – if only they had the support base from which to launch themselves.

Because, as Shaun Shelly wrote in his piece for The Conversation, those who suffer from the illness of addiction are stigmatised and marginalised when it comes to treatment.

As with mental illness, society often rejects and marginalises addicts. We do not tell them to “get well soon” – as we would somebody with a visible ailment.

Instead, addicts are often treated as lepers with the cost of holistic and ongoing care far beyond the reach of many.

Those familiar with the 12-step programme will know that addicts are told drug use leads to jails, institutions or death. It’s a narrative often repeated – in part to scare you into recovery. It’s also repeated because it’s true – for a myriad of reasons ranging from the criminalisation of drugs to the lack of outpatient and mental health care for those who deal with addiction.

And it is in that context where Manyonga’s legacy will take hold. His hard work and exceptional athletic talent set him up for success. The support network he had – and still has – helped pushed him to achieve beyond everyone’s wildest dreams.

Manyonga has changed the narrative for addicts. But it should never define him – or others like him. DM