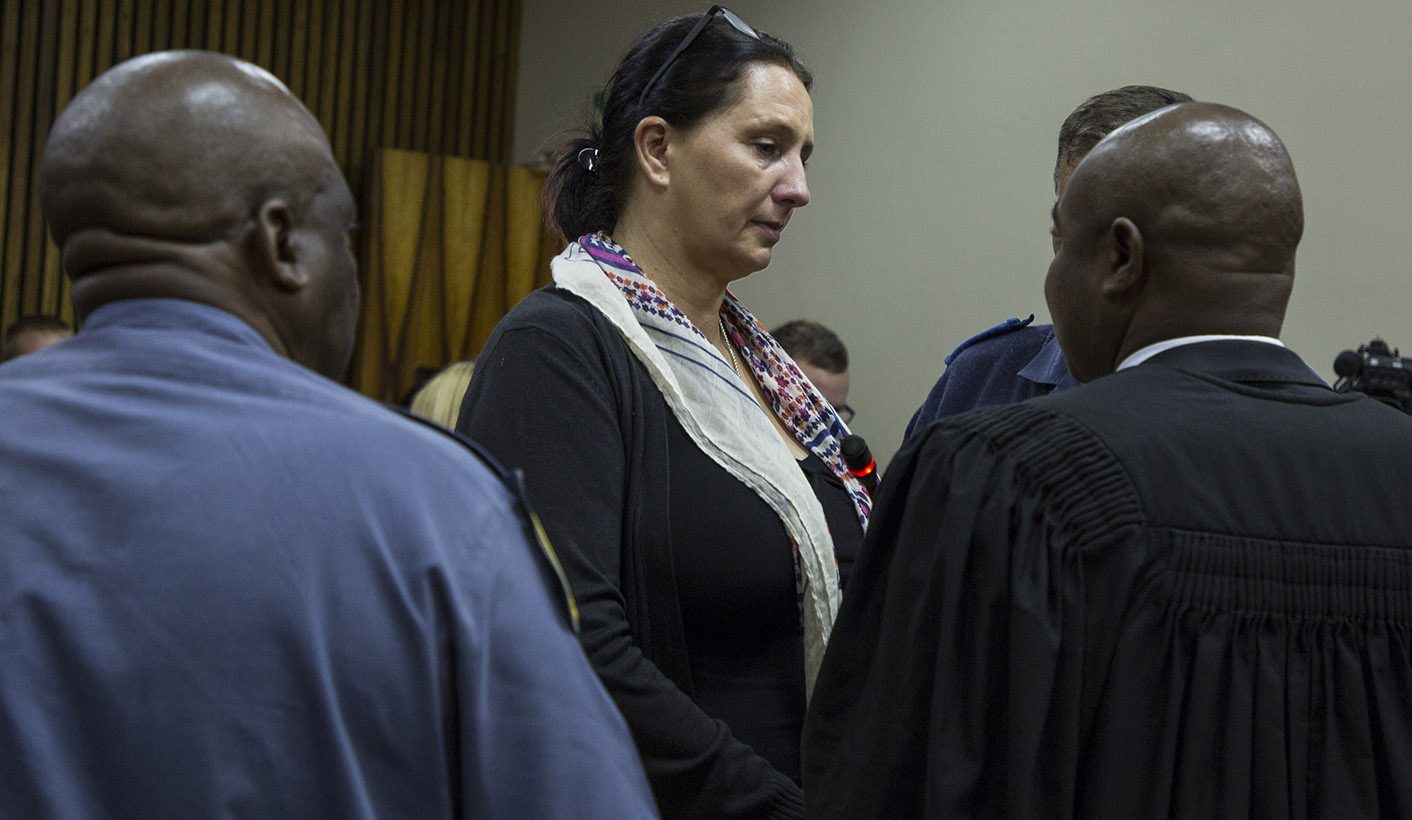 Estate agent Vicki Momberg was sentenced on Wednesday to an effective two years in prison, following a racist rant towards police and emergency service workers which was caught on camera in February 2016 and which occurred after Momberg had experienced a smash-and-grab. The sentence was applauded by many for its strong anti-racism message, but also raises important questions about justice and society. By REBECCA DAVIS.

Crimen injuria is defined as “the unlawful, intentional and serious impairment of another person’s dignity”. This was the crime of which estate agent Vicki Momberg was found guilty by the Randburg Magistrate’s Court in November 2017, and for which she was sentenced to an effective two years in prison on Wednesday.

Momberg’s four counts of crimen injuria were for racially abusing two 10111 call centre agents and police constable David Mkhondo, after seeking help following a smash-and-grab in North Riding in February 2016. In a video circulated on social media, Momberg is shown using the k-word numerous times and railing against “the calibre of blacks” in Johannesburg. She also declared repeatedly that she hated all black people.

Although the egregiousness of Momberg’s words is undeniable, her sentence is surprising. A first offender convicted of crimen injuria would ordinarily be sentenced to a fine and a jail sentence suspended on condition that the offender does not re-offend.

This was the case with fellow estate agent Penny Sparrow, who in September 2016 was sentenced to R5,000 and two years’ imprisonment suspended for two years after pleading guilty to crimen injuria. Sparrow received the sentence following a racist Facebook post.

After UCT student and model Djavan Arrigone was found guilty in 2016 of not just crimen injuria but also assault, for urinating on a black man from the balcony of Tiger Tiger nightclub in Cape Town, he was sentenced to community service and a suspended prison sentence.

In Momberg’s case, Magistrate Pravina Raghoonandan threw the book, handing down the maximum permitted sentence of three years in prison, with one year suspended for three years on the condition that she does not re-offend.

In delivering sentence, Raghoonandan acknowledged that the penalty was unusually severe.

“The crime of crimen injuria is generally not considered a serious offence,” the magistrate said; but “it depends how a particular person’s dignity has been impaired.”

State prosecutors had asked the magistrate for jail time in order to send out a serious message to society. State prosecutor Yusuf Baba was quoted as saying in response to the sentence:

“Harsher sentences must be meted out because of the abuse that takes place on a daily basis.”

In Momberg’s case, there were a number of aggravating factors. One was the sheer number of times Momberg used racial slurs on the evening in question, in two separate forums: on the phone to 10111 and then in person to black police.

Another was the fact that Momberg was reportedly unrepentant in conversations with probation officers before sentencing proceedings, describing the k-word as “simply a swearword” and saying that black people did nothing to “uplift themselves”.

Bizarrely, Momberg had also asked a former colleague to serve as a character witness who proceeded to tell the court that Momberg was “an absolute lunatic who cannot be trusted and is bad news altogether”.

Momberg had also shown defiance after being ordered by the Equality Court in June 2017 to pay R100,000 damages towards Mkhondo, the police officer she racially abused. The court also ordered her to make an unconditional written apology, undertake community service and undertake sensitivity training. Momberg’s response was to say that she would appeal the order.

These factors would all have been taken into account by Magistrate Raghoonandan, together with the state’s plea that the time was right to send a clear message through sentencing.

Momberg’s sentence has been applauded, including by the DA.

In a statement on Wednesday, the opposition party said:

“We trust this ruling will be a deterrent to those who harbour any racist sentiments.”

One of the few bodies to voice criticism about the sentence was lobby group AfriForum, which said the ruling “confirms double standards in South Africa regarding race”.

Afriforum said that Momberg’s racist comments needed to be condemned, but questioned why the same approach was not taken towards black people who insulted white South Africans.

The Centre for Constitutional Rights’ Phephelaphi Dube told Daily Maverick on Monday that the sentence might well be overturned on appeal.

“I’m not too convinced that the sentence will withstand further legal scrutiny and it does not appear to fit the crime, even if she was remorseless,” Dube said.

It has been reported that the case is the first in South Africa in which a person found guilty only of crimen injuria has been sentenced to prison. Daily Maverick has been unable to confirm this, but it does appear to be the first racism case in which the offender will serve time behind bars for words rather than actions. The freedom of expression implications of this will need to be teased out by legal experts.

It should also be noted that the state appears to prosecute crimen injuria quite selectively. For example, a 2016 judgment penned by Judge J Allie in the Western Cape High Court pointed out that in South African law:

“There are no reported cases where sexist utterances have been found to amount to crimen injuria.”

If the Momberg sentence survives an appeal, it remains to be seen what impact this could have on further cases – and whether cases of other forms of verbally expressed prejudice, such as sexism or homophobia, could be treated similarly.

The Momberg case should also spark discussion about the nature and purpose of justice in cases such as these.

There are presumably few people who would argue that time in prison will “cure” Momberg of her evidently deeply ingrained racism. A jail term in this case may feel intuitively satisfying to many, but does little to address the wider social problem of racism and its causes. DM

Photo: Vicki Momberg is seen inside the Randburg Magistrates Court on Wednesday where she was sentenced for shouting racial slurs at a black police officer. She was sentenced to two years imprisonment. Photo: Daily Maverick