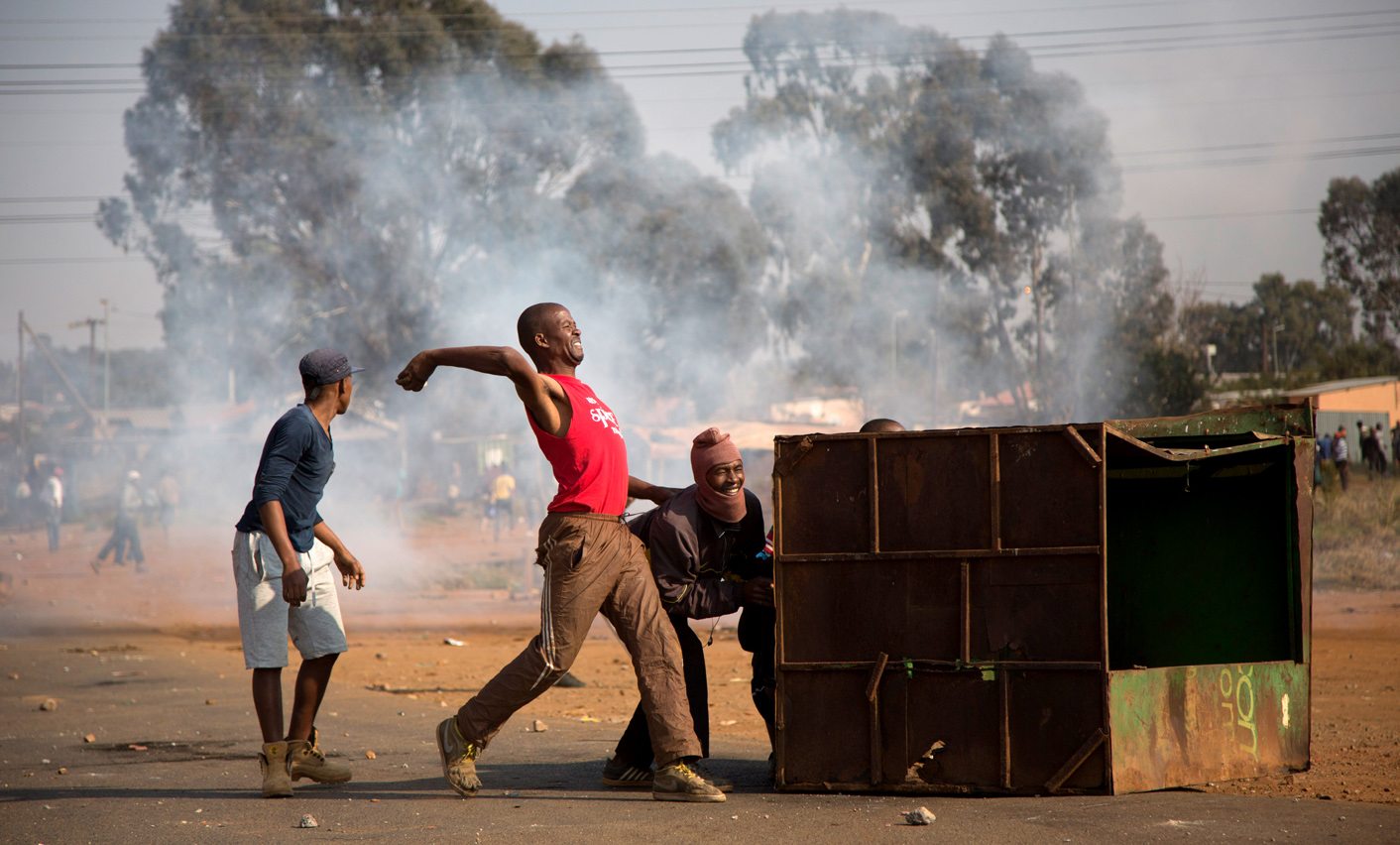 Like sunburn after a sick day, the High Level Panel report is stubbornly continuing to show up delivery failures on land reform. On Wednesday, Dr Aninka Claassens, director of the Land and Accountability Research Centre at UCT, addressed the Land Reform Portfolio Committee at Parliament. The news wasn’t good. By MARELISE VAN DER MERWE.

Land tenure issues have left vulnerable groups more insecure than they were under apartheid, and the relatively few people who do manage to obtain redistribution land remain tenants of the state with “conditional use rights” subject to “productivity”.

There are allegations of elite capture of the land reform budget and farms; long delays in acquiring land, with contentions that some claims are prioritised at the expense of others, and a total lack of policy coherence – with no white paper since 1998.

And, at the current pace of delivery, if land claims are reopened and the expected 397,000 claims are lodged, it will take more than 700 years to complete land restitution.

In some provinces, less than 3% of files are in order.

This is according to Dr Aninka Claassens, director of the Land and Accountability Research Centre at the University of Cape Town (UCT), who addressed Parliament on Wednesday.

Further, she said, there was a problem of constant ad hoc policy changes, with some being implemented despite not being made public.

This, she said, made it impossible for Parliament to keep track of new schemes or monitor budget expenditure.

Claassens was delivering a briefing to the Portfolio Committee on Land Reform regarding the High Level Panel Report on the Assessment of Key Legislation and the Acceleration Of Fundamental Change, headed by Kgalema Motlanthe.

“Restitution has been overrun with claims it cannot accommodate. The problems that currently beset restitution cannot be addressed without effective, forward-looking redistribution taking place at scale,” the report argues.

“The evidence presented shows that the ills of the past are being reproduced in post-apartheid society, despite extensive legislative reform.”

The report – which has made headlines recently for its recommendation that the Ingonyama Trust be repealed – was met with a positive reception by the Speakers Forum, said Claassens.

“When the HLP gave (the) interim report back to the Speakers Forum, (it) received very positive response to the problem statement – that land reform budget and resources are being diverted to various elites, rather than used effectively for redistribution, restitution and tenure reform,” her presentation said.

The speakers had attended public hearings and heard the testimony of ordinary people, she added.

According to Claassens, the Speakers Forum, which commissioned the report, had asked for urgent interventions, particularly in relation to mining on communal land. It asked the Panel to come up with draft bills, and there was concern about the need for Parliament to have legislative drafting capacity.

In terms of the Land Framework Bill, coherence was needed between land reform, redistribution and tenure.

The slow pace was also unacceptable, she added, pointing out that there was an RDP target of 30% of white agricultural land to be transferred to black people by 1999. By 1999, only 1% was transferred. By 2004, only 3%, and by 2013, only 6.5%. There had also been a downward trend in the pace of redistribution.

Women were particularly disadvantaged, with only 23% of beneficiaries being female.

Claassens said an outcomes-for-redistribution study in 2005 had revealed disappointing results. Of the study participants, one-third were locked in intractable conflict and, as a result, the majority of their members had lost interest in the project and had de facto exited; 55% of projects had no implements for production and 27% had inadequate implements; and more than a quarter of projects had not produced anything since taking ownership of their land.

“Questions need to be raised about the quality of the relationship between beneficiaries and mentors/strategic partners, particularly control over land, capital and production. In particular, what voice do the beneficiaries have in these situations, and if the relationship is unequal, what processes are in place to deal with that?” Claassens said.

Claassens also pointed out that there had been substantial re-allocation of the land reform budget, notably to agri-parks.

Currently, there was no law defining who should get farming land, how it should be used, identified or acquired, or what rights beneficiaries should have, she explained. The lack of legal definition enabled “elite capture”, she said, as well as a lack of accountability and transparency.

The proposed National Land Reform Framework Bill would allow for coherent cross-cutting guiding principles in respect of redistribution, restitution and tenure, and how they relate to one another, she said.

It would also define “equitable access” to land, and criteria to measure progress, as well as setting out beneficiary selection criteria. It would clear institutional arrangements, particularly at district level, and offer alternative dispute resolution via a Land Rights Protector.

The report, which was issued ahead of the ANC’s national elective conference in 2017, argues against Constitutional amendment. Instead, it calls for reforms that fall within the existing Constitution, and offers bruising criticism of efforts to date.

“The Panel is reporting at a time when some are proposing that the Constitution be amended to allow for expropriation without compensation to address the slow and ineffective pace of land reform,” it reads. “This at a time when the budget for land reform is at an all-time low at less than 0.4% of the national budget, with less than 0.1% set aside for land redistribution.

“Moreover, those who do receive redistributed land are made tenants of the state, rather than owners of the land. Experts advise that the need to pay compensation has not been the most serious constraint on land reform in South Africa to date – other constraints, including increasing evidence of corruption by officials, the diversion of the land reform budget to elites, lack of political will, and lack of training and capacity, have proved more serious stumbling blocks to land reform.

“The Panel has found that in many instances the problems identified do not arise from the terms of the law per se, but rather from failures of implementation and enforcement.”

It adds that “government has not used the powers it already has to expropriate land for land reform purposes effectively, nor used the provisions in the Constitution that allow compensation to be below market value in particular circumstances”. Rather than amend the Constitution, the report recommends, government should “use its expropriation powers more boldly, in ways that test the meaning of the compensation provisions in Section 25 (3), particularly in relation to land that is unutilised or underutilised.”

The Panel also proposes amendments to existing laws that promote land rights, including the Restitution of Land Rights Act and the Communal Property Associations Act, among others.

Of particular concern, it notes, are “recent laws that have been used to dispossess vulnerable South Africans of customary land rights in former homeland areas” – namely, people who “bore the brunt of the Land Acts and forced removals”.

Daily Maverick previously reported that land reform activists were worried the panel’s recommendations would get lost in the drama and politicking of the elective conference. At the time, they argued that expropriation without compensation was a “red herring”, as dispossession and rights abuses were occurring under existing legislation, of that there was potential for abuse under proposed legislation.

Academics and activists have been arguing in particular that proposed legislation governing traditional leadership would allow for abuse of land rights.

That being said, Claassens told Daily Maverick that panic over the National Assembly’s recent vote in favour of the Economic Freedom Fighters’ motion to amend the Constitution was unwarranted.

Other critics have raised the question of whether there is the political will to follow through – or whether the move might be largely strategic. Phephelapi Dube, Director of the Centre for Constitutional Rights, has expressed puzzlement over focus on the property clause.

The Constitution provides for three rights to land: equitable access, the right to tenure security and the right to restitution, the report notes.

“The panel’s work, including submissions from the public and expert reports, reveals that the record on the progressive realisation of these rights is concerning,” it reads.

Policy development has “drifted away from its initial pro-poor stance”, there are “significant gaps” in tenure security, and government interpretation of customary law, which according to the report is “centred on traditional leadership and away from living custom”, has added to insecurity.

Spatial inequality was also a significant and ongoing problem, the report said.

“To realise the vision of the Constitution requires a capable and developmental state. The panel has been confronted, from the testimony of the public and experts alike, with evidence of weaknesses on the part of government to execute policy and legislation.”

There were many areas where submissions to the panel found “no fault” with the content of legislation but rather with its implementation and enforcement, the report said.

The United Democratic Movement (UDM), though it supported the call for land expropriation without compensation, also welcomed the report, saying it agreed with the proposed Land Framework Bill, and reiterating the importance of the report’s findings.

“Both the NDP and the Kgalema Motlanthe High Level Panel make sound and proper observations and recommendations on land reform, which we support. COPE stands for a responsible land reform programme and shall never mislead our people for cheap popularity just to win votes,” they said in a statement.

There had been a “lack of commitment to real reform” which was “revealed in the meagre budget allocations to these programmes over the years”, she said.

“Last year, only 0.14% of the national budget was allocated to land reform, the lowest figure ever. This budget has been in decline every year for the last 10 years. Instead of expediting land reform, the ANC has been deliberately slowing it down.”

The debate on expropriation gave the ruling party a “get out of jail free” card, she added.

On Wednesday, President Cyril Ramaphosa said in the National Assembly that the discussion on land reform should not be reduced to a debate about expropriation without compensation. South Africans now had the “opportunity to assert the transformative intent of our Constitution,” he argued. DM

Photo: Protesters throw rocks and stones at police forces in protest over the lack of land and housing, Finetown, Johannesburg, South Africa, 10 May 2017. EPA/CORNELL TUKIRI