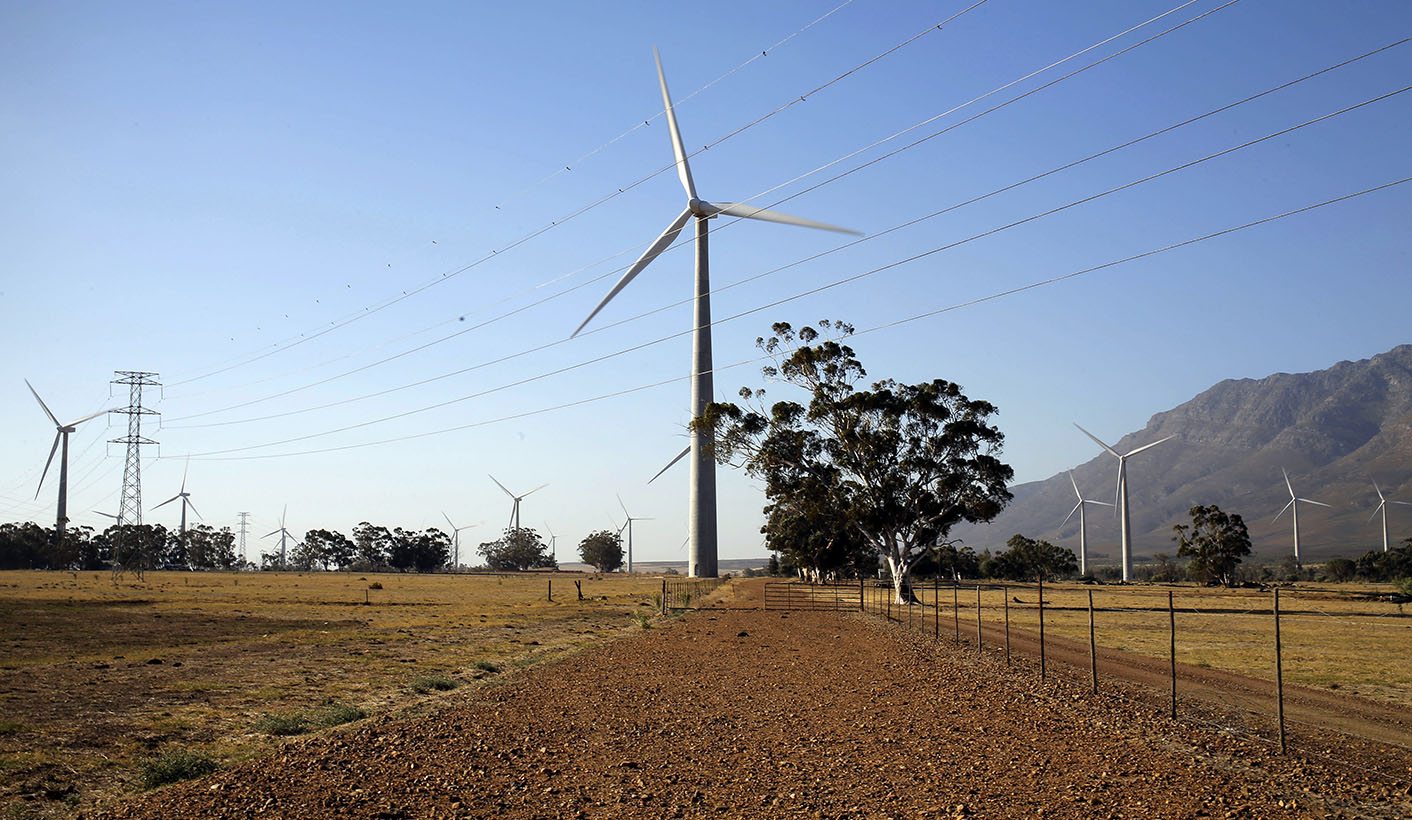 We must define the best vision for Renewable Energy: who should build it, who should own it, how it should be run. Then, to determine how we get to this point, we need a Just Energy Transition plan. By RICHARD HALSEY.

The ongoing drama around the Renewable Energy (RE) Independent Power Producer (IPPs), is a clear sign that unless the concerns from all sectors are incorporated into national energy planning from the outset, we will not progress towards a socially equitable and environmentally sustainable energy sector.

On the 8th March, the new Minister of Energy, Jeff Radebe, announced that the signing of the outstanding Power Purchase Agreements with 27 RE IPPs would happen on 13 March. This signalled the end of over two years of delays in moving utility scale RE forward. Or so it seemed. Late at night on 12 March, Transform RSA NPC (a non-profit company) and National Union of Metal Workers of South Africa (Numsa) attempted to interdict the signing, primarily on a claim that the RE IPPs threaten jobs in the coal sector. Although no interdict was granted by the High Court, the Minister decided to delay the signing until after the matter is heard in court on 27 March 2018. Regardless of the merits, or otherwise, of this decision, the result is yet another delay.

While as a nation we are getting fatigued with delays in progress, let us take a step back and ask two questions related to this issue. Firstly, why do we need to shift away from coal and toward renewable energy? Secondly, how do we do this in a fair way?

These are not simple questions as there are many vested interests at play, which can distort the responses given. Despite the sensitivity of the topic, South Africa must do what is best for the majority of people and the environment that sustains them. Since certain groups of people (such as workers in the coal sector) may be affected, there must be a strategy for how to deal with this. Central to all this is a move from short-term to long-term thinking, and having this plan on how these concerns will be addressed should help shift thinking further into the future. Unfortunately, the media release1 from Numsa and Transform RSA indicates their focus on the short-term, and was further weakened by making misleading claims about electricity pricing and coal fired power station closures. The style of their messaging is a pity because the concerns of workers are critically important, and requires attention by government. However, this type of populist rhetoric combined with a knee-jerk court action is not necessarily in the best interests of their members in the long term, as we shall see below.

Before we deal with the two questions, let us clarify the language. Part of the contestation on this topic seems to stem from a conflation of ideas. RE, IPPs and RE IPPs are separate things, but in some cases the use of these terms interchangeably has caused confusion. RE refers to the source energy – be that sun or wind or any other renewable source. IPPs in their current form come out a programme by national government: they are independent of Eskom and can be from renewable or non-renewable sources. The RE IPPs are the subset of IPPs that are from renewable sources. In some cases, legitimate criticism about some aspects of the RE IPPs (such as the role of privatisation) have been extended to RE in general, which is not helpful for the debate.

Unless humans find a way to power civilisation without electricity, we need to produce it. Coal does the job, but at an enormous cost. Digging and burning coal produces huge amounts of carbon dioxide and other greenhouse gases, fills the air with particulate matter that is harmful to human health, damages and pollutes river systems, uses vast amounts of water, destroys agricultural land and has historically provided poor conditions and low pay for workers. The irony is that these negative aspects are essentially supported by attempts to prolong the life of the coal sector simply to provide employment, which in many cases are not even decent jobs.

On the other hand, new build RE now produces electricity at a lower full life-cycle cost, with far less environmental impact, much lower contribution to climate change while providing better jobs and living conditions. So across multiple metrics there is an urgent need for this shift from fossil fuel to renewable based electricity generation. It is important to note that nuclear is not renewable and is also not a smart alternative for South Africa at this point. It is too expensive, too inflexible, takes too long to build, poses safety risks and produces radioactive waste. In 2018 it can no longer compete with RE despite what the nuclear lobby may say.

Of course there is resistance to leaving coal in the ground, but simply having large coal reserves is not a justification to continue using it. There are some influential people who make a lot of personal wealth from coal, but this is not a reason for the nation to continue to bear the negative consequences of its use. Then there is the difficult dynamic that in doing what is best for the majority of citizens and the environment, a shift away from coal will threaten some jobs in the coal sector. This brings us to the next question.

The concept of a Just Energy Transition (JET) has a number of definitions and mechanisms by which is can be achieved, but in essence it is making the energy transition (to a system which is better on the whole) as fair and as “just” as possible. It brings justice into the process of changing energy sources. This is not a simple business case where a product has become less competitive and it is tough luck for employees. Since this change is beneficial for the entire population in the long term, and it involves a basic service that underpins many human rights, we must apply principles of justice to it. Conversely, the fact that jobs are threatened in the coal sector does not provide a social licence to perpetuate an industry that causes significant harm when less harmful options (such as RE) are available. Therefore, a JET will need to deal with aspects such as reskilling workers, finding alternative employment opportunities and adequate compensation, to name a few.

Key to this debate is the time frame. The benefits will come in the long-term while there will be some short-term disruptions. Further to this, is the need for a JET plan at a national level. Due to the increasing cost of new coal-based electricity and the ever declining costs of RE-based electricity, the energy transition is inevitable based purely on market economics. This is something that the labour movement must accept, and that is why the need to make this transition fair and just becomes so important. As the transition is going to happen anyway, we must focus on how to reduce the short term impacts in as ‘just’ a way as possible so that the long terms benefits are more readily and more equally shared.

As the National Union of Mineworkers did last year, this recent attempt at an IPP interdict suggested that the signing of RE IPPs contracts would lead to closure of coal fired power stations (CFPSs). While the signing of RE IPPs could mean some CFPSs close a bit earlier, they are all going to close anyway. Eskom has a decommissioning schedule for closing power stations as they near end of life. A number of the existing fleet are already due to be have been closed, or have been brought back online after being mothballed and are on borrowed time. So while it is a political move to blame the RE IPPs, closure of CFPSs was always on the cards, which is why it is important that organisations with the interests of coal workers at heart must think long term. A JET plan is better for the future for coal workers than just delaying the closures for a few years and then having nowhere to go.

Congress of South African Trade Unions (Cosatu), in their 13 March response2 to the signing of RE IPPs indicated that they “recognised the necessity of moving from a high carbon economy dependent on coal and oil to a low carbon economy powered by renewable energy sources”, however, their concern is that the IPPs are going ahead “without a sustainable jobs plan or process to re-skill workers in order to take advantages of opportunities in the renewable sector”. Cosatu had raised this issue with National Economic Development and Labour Council (Nedlac) last year, but there does not seem to have been any real movement on it by national government. So in part, the last minute action from labour representatives to involve the courts in the IPP process could come out of frustration because the pleas for a JET plan have not being answered to date. Hopefully the Just Transition Dialogue Series being run by the National Planning Commission can help rectify this.

Regardless of how this latest saga around the RE IPPs plays out, a move to RE is coming, with cost now being a key driver. This reality is good news for the environment and climate change mitigation efforts. However, we do not want to replicate the mistakes and injustices of previous energy systems. We must define the best vision for RE: who should build it, who should own it, how it should be run. Then, to determine how we get to this point, we need a JET plan. Government must prioritise this while civil society, academia and labour movements must continue to push for it. If we do not do this, then we are likely to see the concerns of workers coming last. Without a JET plan, we will continue to see this trend of government, labour, civil society and industry bashing heads when we should be working together. DM

Richard Halsey is a Researcher at Project 90 by 2030

Photo: Some of the 46 wind turbines are pictured at the Gouda wind farm some 150km from Cape Town, Riebeek Kasteel, South Africa, 13 March 2018. T EPA-EFE/KIM LUDBROOK