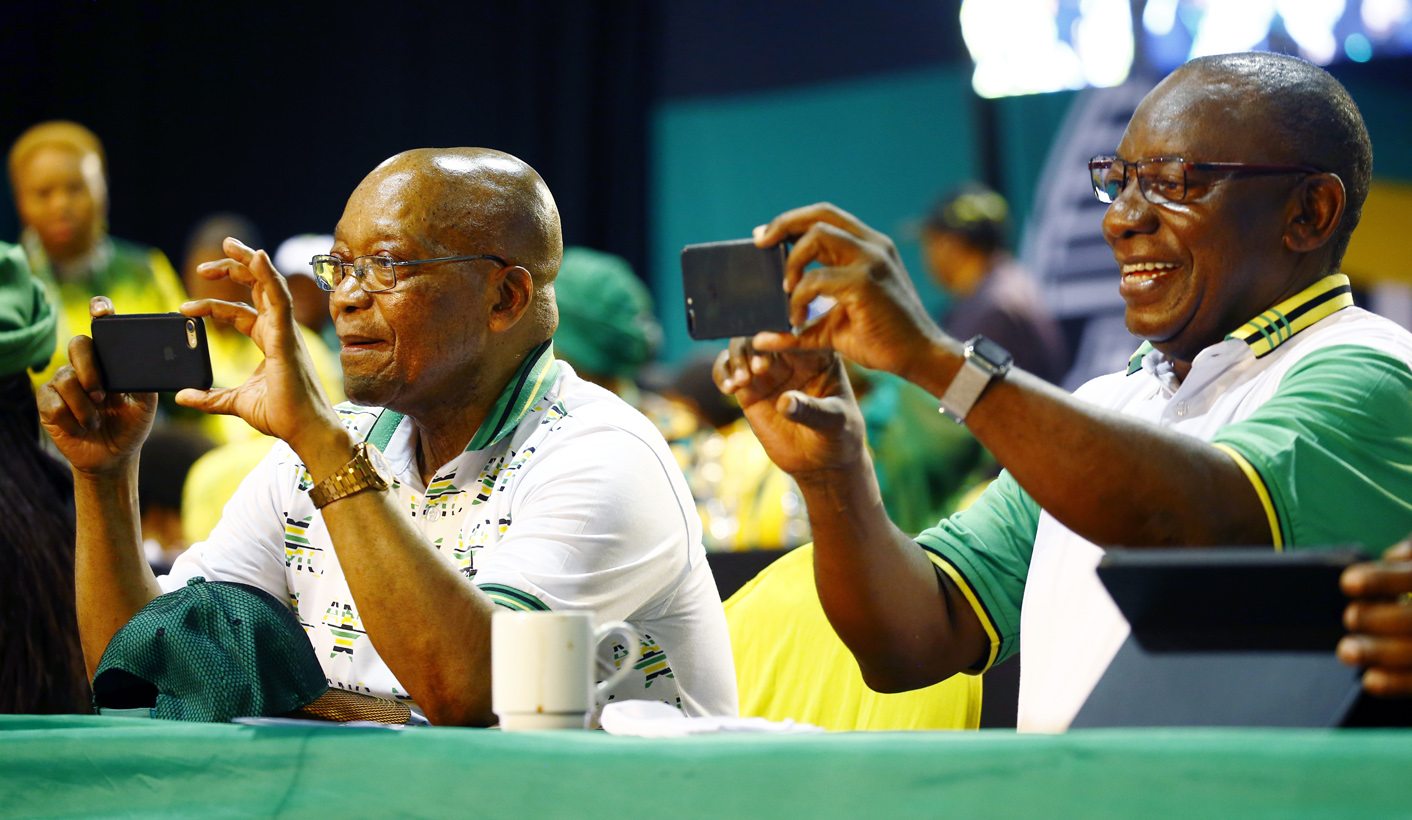 Barely a month after his somewhat ambivalent farewell to the nation, former president Jacob Zuma is back to the tune of Mshini Wami, and it seems his “charm” has outlived his presidency. By CARIEN DU PLESSIS.

A certain song about a machine gun is trending again in some KwaZulu-Natal streets, just like it did over a decade ago. Former president Jacob Zuma has recently sung it at a gathering where funeral undertakers awarded him for his time in government, and also in the parking lot outside a SuperSpar in the Musa Dladla (North Coast) region – and possibly other places too during a weekend voter registration drive.

In one of the last lines in the refrain, he substitutes his own name, singing: “You are pulling/holding Zuma back”, causing the crowd to go wild. The message is clear: Zuma is still in a fighting mood and he has some unfinished business.

Some within the ANC say it feels as if the party’s December conference at the Nasrec Expo Centre never happened, as it failed to resolve the party’s issues. Social media is littered with spats caused by a pushback on issues under the banner of radical economic transformation.

Moments after Cyril Ramaphosa was declared the ANC’s new president, a supporter of his opponent, Nkosazana Dlamini Zuma, loudly declared to journalists that the fight for radical economic transformation would go on. This battle has since manifested in various ways, but always as an indirect attack on Ramaphosa’s presidency.

One such instance was the fate of VBS Mutual Bank after it was placed under curatorship. Groupings sympathetic to Zuma, such as Black First Land First, alleged that VBS was “targeted” because it previously gave Zuma a loan to pay off his Nkandla debt.

Then there was the issue of Finance Minister Nhlanhla Nene reportedly intervening to block the debating of his own party’s motion to nationalise the South African Reserve Bank. Nene feared another downgrade, but it did not stop those who sympathise with Zuma from criticising his move.

Land reform has also caused divisions, with the lobby sympathetic to Zuma calling for expropriation without compensation. Ramaphosa and his allies have, however, been putting a brake on this by insisting that feasibility studies and proper consultation must be done first.

Some individuals in KwaZulu-Natal are even saying a special national general council should be held to discuss what some consider to be the undermining of Nasrec resolutions (which, incidentally, have not yet been published). Zuma’s supporters also argue that his recall should have been done by a conference, and not by the national executive committee (which, as the highest decision-making body between conferences, also recalled Thabo Mbeki in 2008).

While the special NGC isn’t a co-ordinated call as yet, something like a poor performance in the 2019 elections due to boycotts or divisions in, say, the ANC’s biggest province of KwaZulu-Natal, could galvanise the supporters.

Already Dlamini Zuma, who ran her campaign strongly on the gender ticket, has hinted at the possibility of female ANC supporters withholding their votes, even though she denied that she meant it like this.

Thandi Moraka, deputy secretary-general of the ANC Youth League, followed up by saying more overtly: “If we can take a resolution as women to say that we are not going to vote in this upcoming general election, the ANC is going to lose. And we don’t want to do that.”

Directing herself at minister of women, Bathabile Dlamini, she continued: “Just for us to show how powerful we are, Mam’ Bathabile, you can issue an instruction to say: All women, stay at home, don’t vote.”

Much of the divisive talk in the party is due to provincial leadership battles following the Nasrec conference, with a divided KwaZulu-Natal perhaps the most contested. After a fierce battle in which the provincial executive committee put up much resistance, the leadership elected at the 2015 nullified conference was dissolved. The race for positions is on full speed, because even if the leaders’ case in the Supreme Court of Appeal were to succeed later this month, their three-year term should be up this year anyway.

In Mpumalanga, there is a fight about filling former provincial chairperson DD Mabuza’s position after he was promoted to deputy president, with some here unhappy about Mabuza effectively annointing provincial secretary Mandla Ndlovu as his successor.

Leader of the Practical Radical Economic Transformation grouping, Themba Sgudla, has lashed out at former ally Mabuza for reneging on pledges he apparently made, reported 013 News. The former ANC councillor now accuses ANC leaders of not being committed to creating jobs or economic empowerment for young people and is threatening to contest the 2019 elections under the organisation’s banner.

From the Free State – where Zuma-sympathetic ANC Secretary-General Ace Magashule hails from – there were reports from weekend voter registration drives that some leaders failed to acknowledge Ramaphosa’s leadership, while songs and T-shirts in some branches were about Zuma or Dlamini Zuma.

North West Premier Supra Mahumapelo has also been defiant, among others having an open spat with pro-Ramaphosa health minister Aaron Motsoaledi over a R30-million payment from the province to Gupta-linked company Mediosa.

KwaZulu-Natal-based analyst Xolani Dube from the Xubera Institute said Ramaphosa was bound to lose if the pushback from Zuma’s side grew any bigger.

“Cyril is just a man of goodwill,” he said. “He won’t be able to navigate the intricacies of the spiderweb that JZ has left behind.”

There is also the issue of DD Mabuza, who has been associated with some questionable dealings (although never found guilty in a court). He was not Ramaphosa’s choice of deputy but got in with help from the Dlamini Zuma ticket and some cunning of his own.

“Surely Cyril is so embarrassed being associated with him,” Dube said.

Many in the ANC consider the pro-Zuma pushback to be confined to some provinces and to the party itself, rather than government. Ramaphosa will, however, need the ANC to secure a proper mandate to govern in his first full term. Otherwise he’d better hope that former ANC members such as Economic Freedom Fighters leader Julius Malema and United Democratic Movement leader Bantu Holomisa, each with a fair support base, heed his call to return to the ANC – and soon. DM