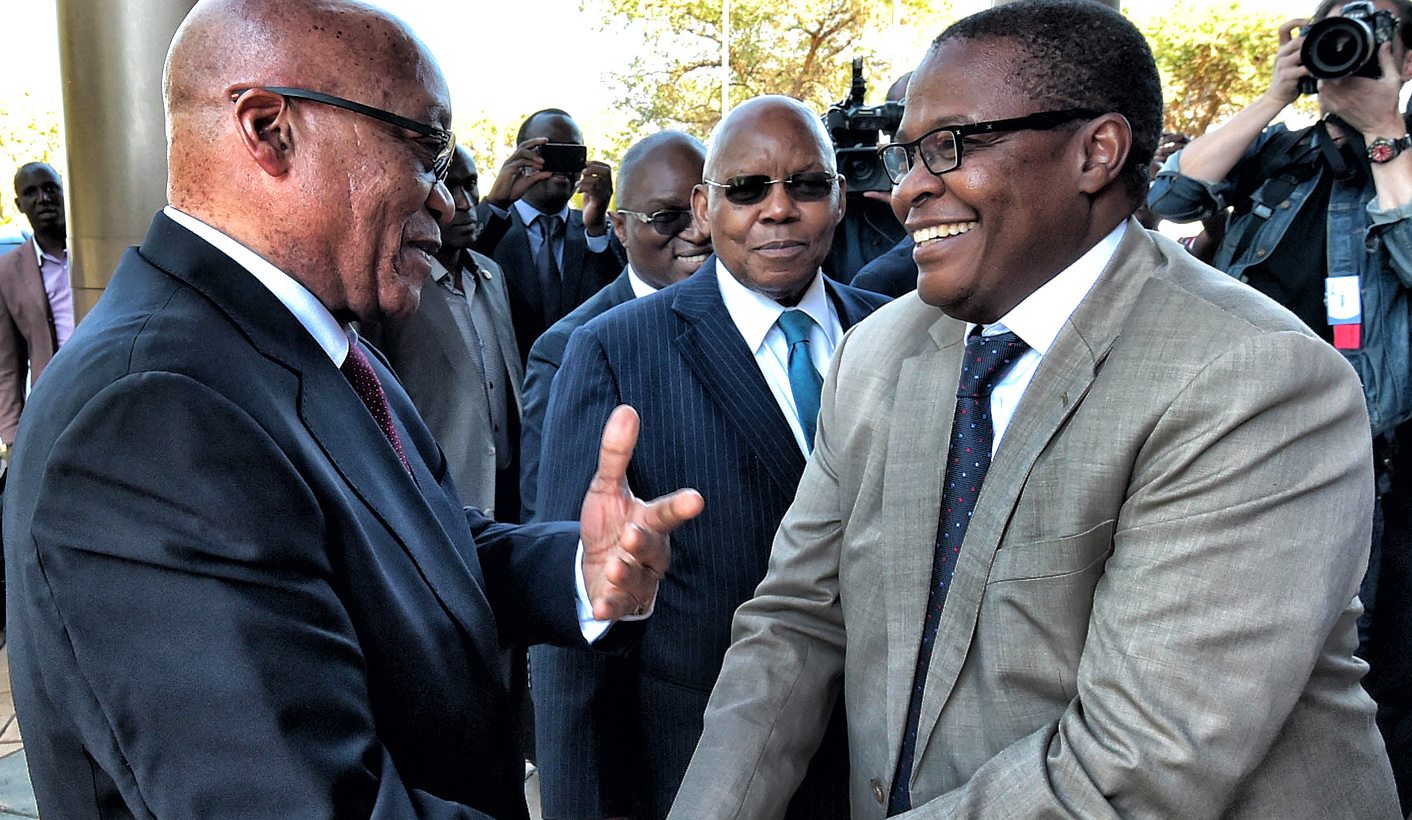 Captured institutions rely on senior officials to facilitate such capture, be it in State-owned Enterprises such as Eskom or institutions such as the tax and prosecution services and elsewhere. But every so often such officials are linked to serious misconduct, while others blow the whistle, upsetting institutional arrangements. The result? The rise of “fake” disciplinary proceedings, the suspension of some, but not others, amid a toxic mix of politics, power and competing factional interests. By MARIANNE MERTEN.

DA MP Alf Lees wants tax boss Tom Moyane to submit – before his appearance in Parliament on Tuesday – the reports that cleared Business and Individual Taxes Chief Officer Jonas Makwakwa in a disciplinary process to return to work in October 2017 after a year on suspension. Lees has written to finance committee chairperson Yunus Carrim to request Moyane to do so.

Scorpio has obtained the disciplinary hearing verdict which shows Makwakwa’s disciplinary proceedings had nothing to do with the May 2016 Financial Intelligence Centre report into a series of suspicious transactions depositing R1.7-million into his accounts that raised concerns of money laundering and tax evasion.

Instead Makwakwa faced counts of having failed to declare conflicts of interest and properties and breaches of the conditions of suspension, including not contacting fellow South African Revenue Service (SARS) employees.

None of this had been disclosed to MPs despite their repeated demands for the reports and updates. After all, Makwakwa’s suspension and disciplinary hearing had come in the wake of an alert by the Financial Intelligence Centre, the statutory watchdog over dodgy financial transactions. And his return to work came as the Hawks were still investigating Makwakwa for breaches of the Tax Act, a probe Moyane in November told MPs had nothing to do with SARS.

For Makwakwa, Moyane and SARS it might just be a case of watching the political weather wane and waiting for the inquiry into the tax authority’s state of affairs announced by President Cyril Ramaphosa during his State of the Nation Address.

The saga around Makwakwa is not an isolated one. Matshela Koko, Eskom’s former head of generation and one-time acting chief executive, also faced a disciplinary hearing in 2017 – just not for financial misconduct or corruption related to his stepdaughter’s company, Impulse, clinching tenders from the power utility, as the Sunday Times reported in March 2017.

Like Makwakwa’s, Koko’s disciplinary hearing was for failing to disclose conflicts of interest. He was placed on special leave in May 2017, suspended in August 2017, and appeared before a disciplinary hearing from October 2017, where he successfully argued he had declared these interests in correspondence to then chief executive Brian Molefe and Eskom board chairperson Ben Ngubane. Koko was cleared in December 2017, and returned to work on 8 January 2018.

In stark contrast to this stands the May 2015 suspension without charges of Eskom chief executive Tshediso Matona and three other top officials by the recently appointed new board.

While he knew he had arrived at Eskom at a time of deep infighting, according to Matona’s November 2017 testimony before the parliamentary inquiry into Eskom State Capture, he could not understand the suspensions without charges. Or why he and the others needed to step aside pending what then public enterprises minister Lynne Brown publicly called a deep dive into the power utility’s troubles. Matona successfully approached the Labour Court, but it became clear Eskom leadership did not want him to return.

“I chose to leave that sordid and sorry episode behind and to continue with my life,” Matona told MPs then.

Effectively this cleared the way for the appointment of Brian Molefe at Eskom’s helm.

“Molefe brought such joy to us and the country,” Ngubane told the inquiry after telling MPs it had been Matona’s choice to leave.

Two of the other suspended executives agreed to the offered settlement packages, while Koko returned to work mid July 2017 after the so-called deep dive report by Dentons “had found no wrongdoing on our part”, according to his testimony to the parliamentary inquiry.

Also raising eyebrows has been the suspension of Suzanne Daniels, Eskom’s company secretary, doubling up as head of legal, who blew the whistle at the parliamentary Eskom State Capture inquiry.

In December Eskom lifted her suspension, shortly after writing a letter of demand to McKinsey and its local associate, the Gupta-linked Trillian Capital Partners for the R1.6-billion the power utility had paid over. By then the parliamentary Eskom State Capture inquiry had heard testimony confirming this payment, and McKinsey’s offer to repay the money.

“McKinsey does not want tainted money,” said David Fine, one of the international consultancy’s London-based directors.

But in January 2018 Eskom brought new disciplinary counts against Daniels, centred on a team building day. The Commission for Conciliation, Mediation and Arbitration last week ordered Daniels’s reinstatement, and the back-payment of five months’ salary. What happens next remains to be seen.

What sealed Koko’s fate and departure from Eskom, unlike in the Makwakwa case, were the changing political winds amid bruising testimony before the parliamentary State Capture inquiry. A new Eskom board was announced on 20 January 2018, just before then deputy president Cyril Ramaphosa went to the World Economic Forum (WEF) in Davos, Switzerland, to talk up South Africa as an investment destination.

And so Koko was again charged, this time on serious counts of corruption and maladministration, according to Eskom. Despite a Labour Court bid to stave off suspension, Koko resigned on 16 February, the first day of his second disciplinary hearing, in a letter insisting this was not an admission of any wrongdoing.

Like Koko, the impact of a new broom at the top had impacted SABC corporate affairs chief executive and former chief operations officer Hlaudi Motsoeneng.

In a disciplinary process subsequently described as discredited, Motsoeneng was cleared in mid-2014 of counts of abuse of power and unilaterally hiking his salary, as found by the public protector in the February 2014 report When Governance and Ethics Fail.

This not-guilty disciplinary verdict paved the way for his appointment as permanent COO some five months later under then communications minister Faith Muthambi, an appointment challenged successfully in a series of court cases by the DA.

Although the courts ruled his appointment as COO invalid in 2016, Motsoeneng reappeared as corporate affairs chief executive at the SABC.

But a new interim SABC board had been appointed after the parliamentary inquiry into the troubled state at the public broadcaster. And in May 2017 that interim board announced it is instituting a two-fold disciplinary process against Motsoeneng: one, the public protector 2014 instruction of disciplinary proceedings was revived, and two, he was charged with bringing the SABC into disrepute during a rambling media briefing the previous month.

In June 2017 Motsoeneng was dismissed on the latter count of bringing the SABC into disrepute.

There are plenty of other examples of how disciplinary matters are embroiled in institutional politicking and officialdom’s assessment of prevailing political winds. And often courts are approached to bring about action.

One such example is that of National Prosecuting Authority (NPA) advocates Nomgcobo Jiba and Lawrence Mrwebi. In late December 2017 the North Gauteng High Court ordered the president and NPA to bring disciplinary charges against them after they were struck off the advocates’ roll in September 2016 by the General Council of the Bar.

Jiba and Mrwebi have been on special leave to appeal against being deemed not fit and proper after the bar council complaint that was brought on the back of several judgments critical of their roles in, among others, the trial of crime intelligence Lieutenant-General Richard Mdluli.

The court ordered the suspension of Jiba and Mrwebi – special leave allows an official to keep work laptops, cars, and email privileges, suspension does not – pending their appeal against the General Council of the Bar decision in the Supreme Court of Appeal in Bloemfontein. Being struck off the advocates’ roll meant neither qualified for their NPA jobs.

Meanwhile, Mdluli, who has been linked to former president Jacob Zuma’s rise to the highest office, was relieved of all his duties in January 2018 and parted ways with the SAPS a few months before his official retirement date after having been on suspension since 2011.

Despite a host of legislative, regulatory and ethical guidelines stretching from the Public Service Act and regulation to the King Report on good corporate governance, there appears to be no consistent approach in disciplinary processes. Until court challenges are brought to force action, or parliamentary inquiries initiate change, institutions seem to be content to plod along according to their assessment of the political winds.

It’s not a good track record for many of South Africa’s public institutions. DM