Op-Ed: Chasing the Phantom – Walter Lippmann and the Land Debate 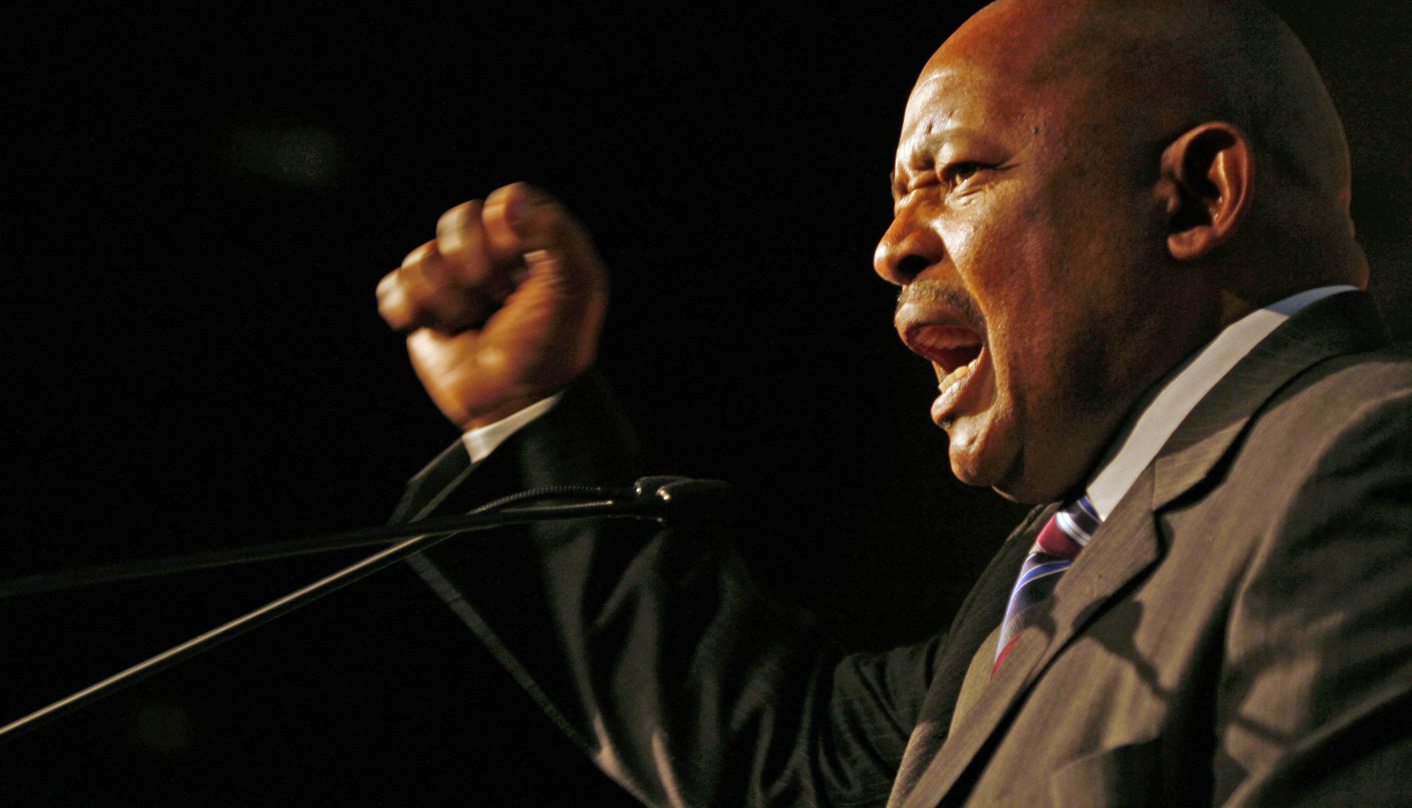 In no nation is the question posed by Mosiuoa Lekota entirely settled. Most societies get rattled by it from time to time. But rarely is it expressed so fearlessly. Last month in Parliament, above the puerile cackle that has become its soundtrack, the leader of the Congress of the People (COPE) party thundered rhetorically: “Who is our people, who is not our people?” That question will be hard to avoid in 2018, writes TERENCE McNAMEE.

The COPE leader was roiled by the new administration’s promise to expropriate land without compensation. Push that policy, he fumed, and the Constitution will break. Lekota’s cri de coeur was not well served by his framing of land dispossessions in southern Africa over centuries. Most thought his emphasis on the greyer parts of that history was a specious muddle. It was all best forgotten – until he posed the question.

Lekota, a former provincial premier and government minister, knew his question was devastatingly loaded. Politicians reflexively deploy terms like “our people” and “the public” to defend policy. Whether narrow or national interests are served is immaterial.

We do the same. Seldom do we not hear that “the public has spoken” when civil society actions succeed. The phrase ascribes unity and purpose to society. Yet few can explain what it means. When the outcome is an absolute good, such as better access to HIV services due to the Treatment Action Campaign, no one cares how the public is defined. When rabid populists invoke “the people”, everyone should.

In their minds there are only “true” citizens. Individuals or groups that do not fall in line with populists’ thinking are laggards, whose claim to nation and territory is illegitimate. The idea of a national interest is unproblematic for populists because it is by definition their interest, just as popular will is their will.

Democrats see things differently. The public is instead a mishmash of rival interests. All citizens have an equal right to be involved in government decision-making – whether directly via referenda or indirectly through elections, courts, a free press and so on. Ideally, in a well-functioning democracy, diverse individual or group interests are distilled into “what is best” for society – the so-called public interest – in matters of national importance.

No one who heard Lekota’s question could doubt which camp he’s in. Yet his own venerable response – “South Africa belongs to all who live in it” – only gets us so far. The constitutional review on land expropriation will be the toughest check on nation building since 1994. In a society where “our people” is spoken about publicly and sotto voce in so many different ways and contexts, it demands a richer “official” answer.

Populists spend a lot of time boasting about their direct relationship with “the people”. They also like stoking identity politics to advance their exclusivist vision of the public. Eventually it comes back to bite them. As Amy Chua explains, once identity politics gains steam, it subdivides. More and more groups, each seeking special recognition, emerge. The initial populist construct – built around intractable notions of race, tribe or class – dissolves.

The coming constitutional review will expose populist fallacies. That is a good thing. But the shallow assumptions democrats hold about the public must also come under scrutiny. They are on less sure ground than they think.

The democratic ideal of an inclusive public is threatened by the global retreat of civil liberties and political rights. So too inequality. A sense of shared fate and nationhood is difficult to sustain where gross inequality seems all but permanent. Democracies can cope with divided electorates and fragile coalitions. But a generalisable “public” is harder to fathom when they become the norm.

Anyone who still believes Lekota’s question was easy is unlikely to have read Walter Lippmann.

Among thinkers who contest traditional ideas about the public and query whether its “interest” can ever be ascertained, Lippmann is the most influential. Plenty of scholars have argued that for all its putative impact in the life of a democracy, the public is a moving target. Defining it is like trying to pin jelly to a wall.

Lippmann went much, much further. He railed against democratic notions of “the people” as a “super-individual with one will and one mind” or an “organism with an organic unity of which the individual is a cell”. This public supposedly comprised of “sovereign and omnicompetent citizens” was for Lippmann a fiction, an abstraction – a mere phantom.

The “public” will be a recurrent character in the coming land review. It will also feature ad nauseum during the 2019 election campaign, as it does in any national election. Both events will inch the nation on to political geography it knows well, the precipice. Government and business are worried. Hence their coordinated messaging to the public – “don’t panic”.

To which Lippmann would retort acerbically, “To whom are you speaking?”.

A new direction on land expropriation must be based, above all, on research, hard data and a sense of justice. This article has nothing to offer on these most vital elements.

The highly emotive and symbolic nature of the land debate is inescapable. But it can’t be overtaken by fact-free rhetoric and political theatre. This is where Lippmann can come in. His celebrated critique of democracy should unsettle anyone channelling “the people” to further their agenda.

The Phantom Public was published in 1925. Lippmann was then at his gloomiest about the possibilities of American democracy. He had witnessed first-hand the manipulation of public opinion during the First World War and the alarming rise of fascism in Benito Mussolini’s Italy. As both a journalist and an adviser to US President Woodrow Wilson – whom he assisted in drafting the famous “14 points” that were supposed to make the world safe for democracy – Lippmann experienced how the “manufacture of consent” by government had warped democracy.

Noam Chomsky – wrongly viewed by many as his moral and intellectual antithesis – used Lippmann’s phrase for the title of his own seminal work on the media.

Lippmann’s book took direct aim at nebulous assertions found in democratic theory. Two in particular were in his crosshairs: that the public acts and guides wisely from the bottom up; and that the functioning of government represents the popular will.

Lippmann’s profound disenchantment mark every page of The Phantom Public. Since the “false ideal” of the public as a competent, “knowable body with fixed membership” depended on a “mystical notion of ‘society’”, Lippmann beseeched Americans to get real. He argued that on most issues and most of the time, the public is very limited in its ability, energy and capacity: “inexpert”, “slow to be aroused” and “quickly diverted”. Mostly, it’s just not interested. “When the public attempts to deal with the substance it merely becomes the dupe or unconscious ally of a special interest,” he despaired.

Lest one thinks Lippmann could not get any more cynical:

(The public) is a deaf spectator in the back row … interested only when events have been melodramatised as a conflict. (It) arrives in the middle of the third act and will leave before the last curtain, having stayed just long enough perhaps to decide who is the hero and who the villain of the piece.

As a consequence, he called for the public:

… to be put in its place, so that it may exercise its own powers, but no less and perhaps even more, so that each of us may live free of the trampling and the roar of a bewildered herd.

Not for nothing did some critics call The Phantom Public the most elitist and pessimistic tract on American democracy ever produced. Yet the book – and Lippmann – would age very well.

The author became the US’s greatest public intellectual of the twentieth century. He invented the term “stereotype” in the way it is commonly used today. He pioneered the theory of public opinion in his eponymously named book. When radio was in its infancy, he wrote prophetic columns on propaganda and what we would now call “fake news”. He popularised the term “Cold War”. Until he died in 1974, Lippmann had had the ear of every US president over 50 years. His impact on our understanding of politics and media is enormous.

Initially, The Phantom Public did not resonate as widely as his earlier books and eventually fell out of print. Only decades later after the Vietnam War, Watergate and other political disasters did Lippmann’s demythologised view of democracy gain a wide readership. What some originally dismissed as an elitist depiction of a world divided between the “masterful few and the ignorant many” came to be seen as a prescient attempt to align democracy with the true nature of public opinion. The book laid bare the tension between increasingly diverse societies, government decision making and the possibility of unified “public”. Some passages are eerily current.

Where the facts are most obscure, where precedents are lacking, where novelty and confusion pervade everything, the public, in all its unfitness is compelled to make its most important decisions.

(I’ve yet to read a sentence written on Brexit that better captures that debacle.)

The nub of modern politics, Lippmann avers, is a modus vivendi among competing interests. Politicians should not try and find an “identity of purpose”. Lippmann’s advice was to seek instead “an accommodation of purposes” and no more.

Lippmann’s response to Lekota’s question in parliament would have stuck in his craw. A liberation hero, his concept of “the people” is indistinguishable from Mandela’s. Lippmann’s would be far too gloomy and fatalistic.

No one wants politicians to stop trying to find a common vision, to stop chasing an idea of the public that includes everyone. It would be comforting to think The Phantom Public got it all wrong. That popular will really exists. And “the people” was coherent and definable.

Even if all that were indeed true, the book would still be one of the most potent remedies to populist cant ever written.

If there is a modest contribution The Phantom Public could make to improving public debate on the land question, a few health warnings in the book are worth highlighting in conclusion.

The first is to question relentlessly anyone who claims that they are moved on by and understand the common will. That is not fair to countless civic-minded people. But it is better to err on the side of circumspection.

The second is to detach the land question from the tyranny of public opinion. The South African public is not an “agent of overmastering social purpose”. A “national soul” exists only in a rhetorical sense. It is in fact a deeply pluralistic and complicated society, still in relative infancy in terms of democratic consolidation.

And the last is to avoid moral posturing. Often that can cripple important debates. Of course, this will prove infinitely harder for some people within “our people”. DM

Dr Terence McNamee is the former deputy director of The Brenthurst Foundation.

Photo: Former defence minister Mosiuoa Lekota delivers a speech during a meeting of a group of ruling party defectors who are meeting over forming a new party ahead of elections due next year, in Johannesburg November 1, 2008. REUTERS/Antony Kaminju (SOUTH AFRICA)