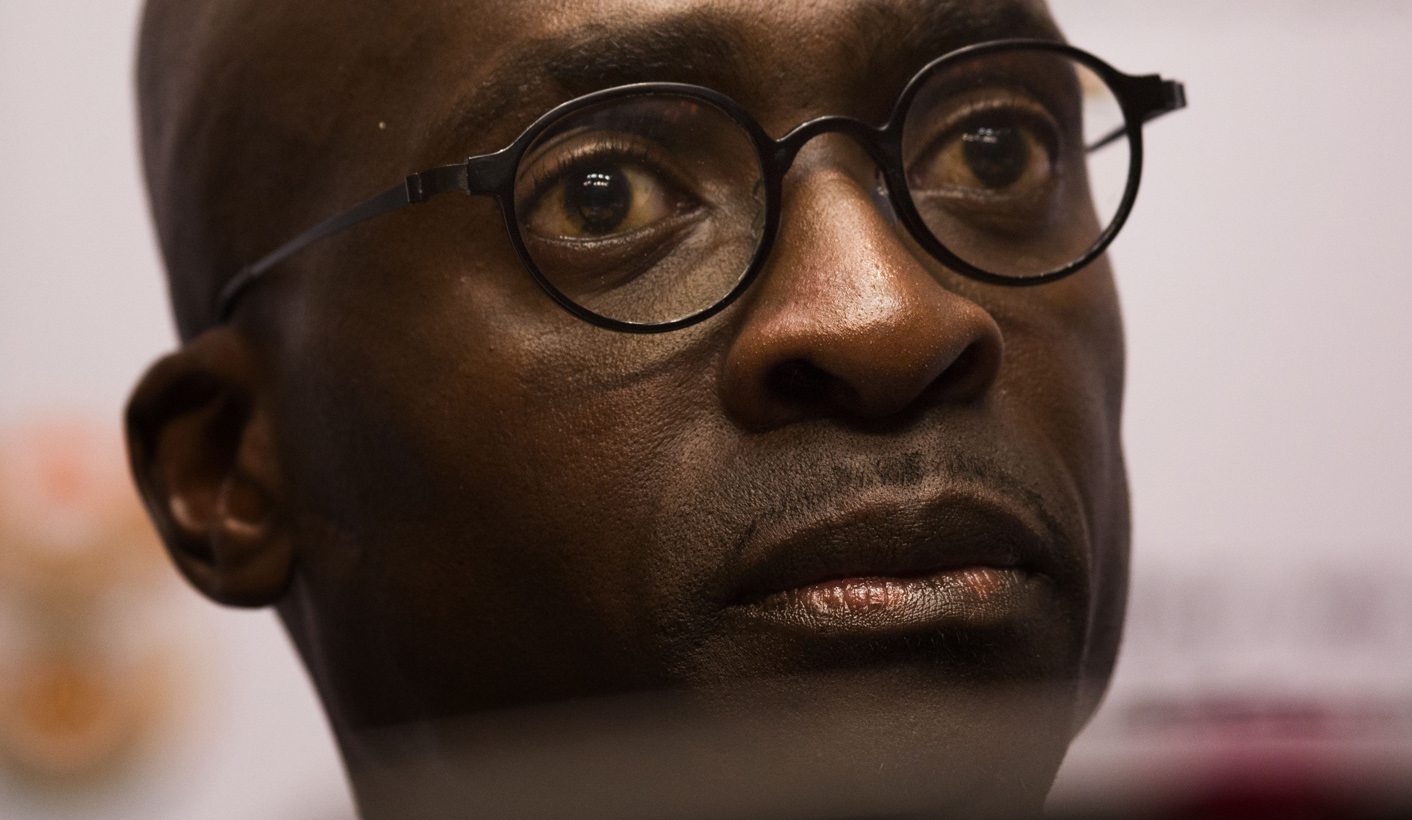 Home Affairs Minister Malusi Gigaba was a no-show for Wednesday’s ministerial Q&A in the House. Opposition MPs complained that he was “taking us for a ride”; Gigaba’s presence officially had been confirmed that day – twice. And so the storm that exploded over the citizenship status of various Gupta family members, in particular Atul Gupta, was left to be cleared up by the verbosely vague Home Affairs Director-General Mkuseli Apleni from Pretoria. By MARIANNE MERTEN.

Home Affairs Minister Malusi Gigaba on Wednesday morning was spotted walking through the parliamentary precinct, greeting and chatting to various bodyguards waiting around for their ministers busy elsewhere. It’s been confirmed Gigaba had lunch at a nice, and quite trendy, restaurant in the V&A Waterfront. But when 15:00 came along, his seat on the parliamentary benches remained empty.

DA Chief Whip John Steenhuisen was out of his seat in no time. Where was the Gupta flip-flop minister, he asked.

“What is the reason for the minister’s absence, because he goes around lying to South Africa?”

That bit about lying eventually got Ndlozi kicked out of the House when he refused to withdraw the comment, deemed unparliamentary. There was no love lost with Speaker Baleka Mbete, who overruled his argument that it actually was based on a court judgment. (More about that later.)

IFP Chief Whip Narend Singh did try to lower tempers. “We were assured all ministers would be present. What happened between 10.43am and now?”

It was then that a letter was handed to Mbete, who earlier indicated she was at a loss as to why Gigaba was not present. That letter, she said, was from the minister’s chief-of-staff, unsigned, tendering apologies for not being able to attend.

“He is not feeling well. Minister did not sign the letter because he had to rush to the doctor.”

The doctor’s appointment/note move is not an unknown excuse in parliamentary corridors.

Earlier on Wednesday former SAA board chairperson Dudu Myeni tendered her apologies to the parliamentary State Capture inquiry, saying her doctor had put her off and she was not allowed to fly. It was the second time in two weeks that Myeni was a no-show at the inquiry, and she’s now been given 24 hours to email through the doctor’s note – and be available next week.

In September 2017 Myeni failed to attend a finance committee meeting and had then deputy finance minister Sfiso Buthelezi explain: she was in Cape Town, but had a tooth extraction the day before and had submitted a doctor’s note, he told MPs.

But the public enterprises State Capture inquiry did hear from former Eskom chair Ben Ngubane, who was present after previously sending several letters of apology for feeling unwell.

Daily Maverick has reliably learnt that Gigaba had to rush off to the doctor on Wednesday afternoon, apparently because of a foot ailment.

It’s tempting to quip that said foot injury was brought on by the foot-in-the-mouth accident the previous day. At a media briefing called at his ministerial offices, Gigaba said Atul Gupta and Ajay Gupta were not South African citizens.

But the Twittersphere produced Atul Gupta’s passport clearly stating that Atul Gupta’s a citizen, and a screen grab showing his confirmed voter registration – at Saxonwold, of course – courtesy of Vytjie Mentor, who blew the lid on how she was offered a ministerial job by the Guptas when she was called to a meeting with then President Jacob Zuma.

The Electoral Commission of South Africa (IEC) confirmed on Radio 702 that Atul Gupta was registered as a voter. And that’s only possible if the registered voter is a citizen registered in the national register.

The IEC checks its systems. Even newly minted International Relations and Co-operations Minister Lindiwe Sisulu chipped in to say she was surprised to hear the two Gupta brothers were not citizens.

Actually it was all down to a ministerial tongue. Gigaba in a statement on Wednesday admitted as much, saying confusion arose “partly because in (Tuesday’s) media briefing I erroneously referred to Atul Gupta in the same breath as Ajay…”

But he wasn’t around to clear the air in the House. As parliamentary rules require notice, the DA question set for the day was a rather innocuous, “How many foreign nationals were granted South African citizenship since 1 April 2017?”. The bite always is in being unprepared for tougher and more topical follow-ups.

With Gigaba not in the House, and opposition parties not accepting his deputy answering in his stead, Mbete agreed that the question should stand over for next security ministerial Q&A session in the next parliamentary term.

Instead Home Affairs Director-General Mkuseli Apleni, by “direction of the minister”, held a media briefing from Pretoria to clear up the confusion and state the facts.

Apleni has been the point man on this since June 2017 when he first briefed the home affairs committee. If anything, Apleni stays on message. And he has the documents to prove things.

So what did he say?

Atul Gupta was naturalised as a South African citizen in November 2002. And Rajesh, or Tony, Gupta became a citizen in July 2006.

The “confusion” has been around a family application for fast-tracked naturalisation because of the investments in various Gupta-lined family companies. The five family members’ applications were approved, but citizenship status was dependent on renouncing Indian citizenship. And that Ajay Gupta did not do. Therefore he remained on permanent residence status.

“(Atul Gupta) was naturalised before the tenure of Minister Malusi Gigaba at home affairs. Therefore, Minister Gigaba never dealt with the granting of citizenship to Atul Gupta…,” said Apleni.

So there’s nothing untoward. Finish and klaar.

In 2002, the home affairs minister was IFP leader Mangosuthu Buthelezi, and in 2006 it was Nosiviwe Mapisa-Nqakula, now defence minister.

But on Thursday DA MP Haniff Hoosen will table a substantive motion to ask that he be referred to the Joint Committee on Ethics and Members’ interest for “misleading Parliament and the nation about Gupta naturalisation”. Whether this will actually happen remains to be seen.

The EFF continues to describe Gigaba as a “pathological liar, who must be removed from Cabinet and Parliament”.

And there is that North Gauteng High Court judgment that found he had lied under oath in the application by Fireblade Aviation to ensure Gigaba stuck to the permission he gave in his previous stint as home affairs minister for the Oppenheimer-linked company to render private customs and arrivals facilities at OR Tambo International Airport.

“By telling a deliberate untruth on facts central to the decision of this case, the minister has committed a breach of the Constitution so serious that I could characterise it as a violation,” said the judgment delivered hours before Gigaba delivered Budget 2018.

His response when asked in the traditional pre-Budget media briefing?

“I stand by what I said,” Gigaba told journalists then, saying he had yet to study the judgment and consult his lawyers.

The DA has laid a complaint with the public protector with regards to the judgment’s finding that Gigaba had lied under oath as a breach of the Constitution, Executive Ethics Act and Executive Ethics Code.

On Wednesday Gigaba wasn’t in the House to answer an ANC question on whether he or his department intend appealing this.

Gigaba’s Gupta headaches will not simply go away because his director-general says so, and nor will any of the other issues – regardless of spin and doctor’s appointments. DM