Sympathy for the Prisoner: How years ‘awaiting trial’ takes its toll on the incarcerated 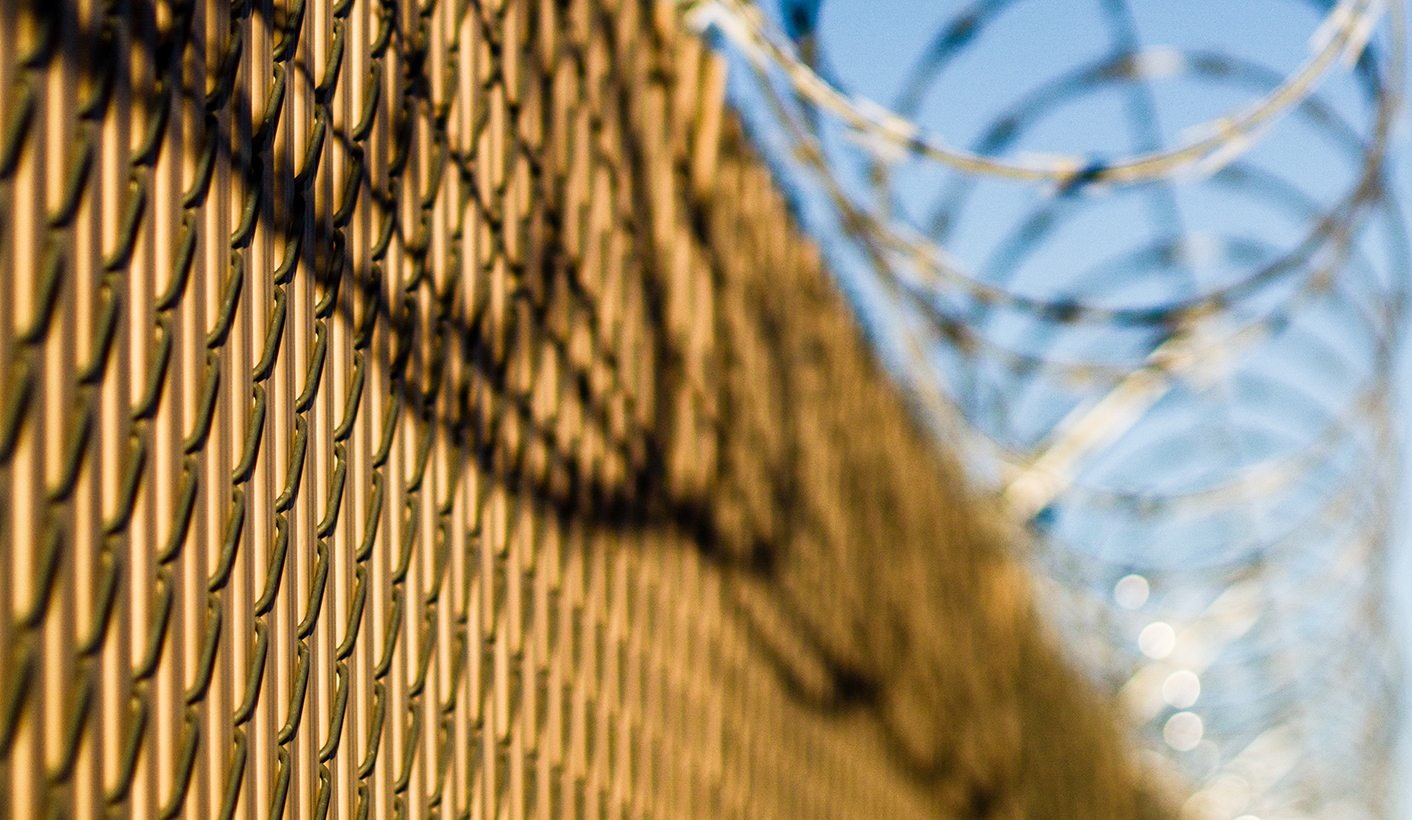 Victor woke up one day and took a walk to downtown Joburg with an itch to buy an R-Kelly CD. It turned out to be a long-ass walk – it took him eight years to return. But his is not a funny story. It’s one of those we do not really want to hear. Of how a man was robbed of something that cannot be returned – time. By NKATEKO MABASA.

The year is 2005. Three men stage a heist at Montecasino, and walk away with an exorbitant amount of money – R3.1-million. The authorities might have thought that this must be the same gang that has robbed Kempton Park casino, a branch of FNB and the Gold Reef City casino earlier in the year. It seemed similar to the casino robberies of 2001 too. They were under pressure to deliver an arrest, any arrest.

Victor (who requested that his surname not be used) worked at Montecasino as a cashier. He arrived at work for the evening shift on 26 June to discover there had been a robbery that morning. Two days later, the robbery far from his mind, he decided to buy an R-Kelly CD that contained one of his favourite songs, The Storm is Over. While walking home he received a call from the police asking his whereabouts.

While he was away, the police had arrived at his place and, not finding him there, got his number from his wife.

“They started calling me and said I must tell them where I am as they wanted to interview me and ask me about my job,” said Victor.

At the time, Victor was en route home, but had stopped to chat to friends he met along the way at the Hillbrow Clinic. He told the police officer where he was and soon afterwards they arrived and arrested him.

“They took me to a place… I don’t know where, but it was a bush… they started torturing. I was handcuffed and made to lay on the ground. There were three police officers. They took a plastic tube and started tubing me,” said Victor.

“I didn’t know what was going on. They beat me, choked me and started kicking me… I thought I was going to die there,” he said.

He would later hear that a police officer had received a statement from a woman who claimed Victor had given her R74,000 to hold. She also told him that Victor was an associate of a man named Nation, who also worked at the casino.

“They started asking me where Nation was,” describing the relentless questions the police threw at him while torturing him, he continued.

“We used to take the same transport going home after work, so some people told them me and Nation are friends,” Victor explains now.

After the bush interrogation, he was taken to Douglasdale police station where he was charged with robbery. He was initially released on R3,000 bail but broke his conditions by leaving the country. On his return, he handed himself over to the police and was denied bail.

He would spend the next eight years in Sun City, making numerous court appearances – more than 90 times – before his case was finalised.

Something always went wrong: either his lawyer was late, the magistrate was sick or one of the other co-accused was not there. At one point, three years in, a judge died and they had to get a new one, starting the case all over, Victor remembers.

As an awaiting-trial prisoner Victor should have been held separately from convicted prisoners. Not so, says Victor.

For the first four months, Victor slept on the toilet seat.

“In a cell that takes 30 people, we were 75. I had to sleep on that toilet until I bought one of the beds from an inmate running that cell.”

Initially his wife and siblings visited weekly. But…

“After three or four years, they got tired,” said Victor.

After five years his wife left him and moved on with someone else. His son grew up without knowing his father.

He went through three lawyers over the course of eight years. His final lawyer advised him to take the best deal available: confess to the crime and serve a five-year suspended sentence.

“‘It is the only way to leave this place’, that’s what he said to me.”

He took the deal.

In South Africa, according to the Wits Justice Project, at least 2,000 of the people behind bars are awaiting trial, and have been doing so for on average two years.

“It is because of an indifference we have to the fate of people in prisons, whether guilty or not,” said Ruth Hopkins, a journalist and researcher with the Wits Justice Project.

And on the continent, according to the SA Human Rights Council, about 43% of the people detained in prison cells are awaiting trial.

“For many of these pre-trial detainees, the right to a fair and speedy trial is illusive. The lack of affordable legal representation – often combined with unaffordable bail conditions – means that detainees can wait for years before a court adjudicates their matters. Sometimes detention follows arrest and custody for minor or petty offences and the detention of people who do not pose a risk to society,” said Gail Smith, SAHRC spokeswoman.

Victor was a victim of a system which drives a “disturbing narrative” of “gross violations of human rights”, of a correctional justice system that may very well mistake one of us to be someone we are not.

“Globally, desperate people in pre-trial detention often plead guilty, even when innocent,” says Incarceration Nation Network, a global organisation that seeks to end the criminalisation of poverty, in a video on Victor’s and two others’ imprisonment.

But what drives the delays leading to miscarriages of justice?

“The primary cause has to do with legal dysfunction,” says Baz Dreisinger, founding academic director at Prison-to-College Pipeline, a programme that helps inmates go to college after their prison sentence.

A study done in Johannesburg, Mitchells Plain and Durban by the Civil Society Prison Reform Initiative titled Research report on remand detention in South Africa: an overview of the current law and proposals for reform, found that “65% of all accused remained in custody until the conclusion of their cases, the overwhelming majority of which were facing charges for serious offences”.

It was also discovered that “54% of cases were withdrawn or struck off the roll, and only one out of 16 cases resulted in the accused’s conviction” and, shockingly, “bail was granted to only 3% of accused on or before the first court appearance”.

According to Clare Ballard from the Civil Society Prison Reform Initiative, “Although the current legal and jurisprudential framework encourages courts to demand greater justification from the state before ordering an accused’s continued detention, it seems that either repeated bail applications are not being brought frequently enough to be of benefit to the remand population or that magistrate’s courts are simply refusing to release bail applicants.”

For Victor it was only when section 49G of the Correctional Services Act was put into effect in 2013 that things started looking up for him. The section allows for detainees who have been on remand for more than two years to be entitled to have their case heard by a judge who can order the awaiting-trial prisoner’s release unless it is not “in the interest of justice”.

The judge decided that Victor’s release was not in the interest of justice.

His new lawyers, advocates Adrian d’Oliveira and Peter Jordi of the Wits Law Clinic, pushed for the case to be heard at the Constitutional Court, after failing in his appeal in the Supreme Court. It took a year for them to be heard and later discovered it would take three more years for the case to conclude. They advised him to take a plea deal, pleading guilty of robbery for which he would received a five-year suspended sentence.

The justice cluster, a group of government departments responsible for law and order and crime prevention, hosted discussions in 2017 on reforming the bail system.

In March 2017, former President Jacob Zuma visited the crime-stricken communities in Nyanga in the Western Cape and Soshanguve, close to Pretoria. There, community members complained about prisoners who do wrong but are later seen walking the streets after being arrested. Soon after that the president instructed the security cluster as well as his ministers to tighten the bail laws, “so that it favours victims” instead of the accused.

Rhetoric from former Police Minister Fikile Mbalula and now returning Minister of Police Bheki Cele, when it pertains to alleged criminals, shows the disregard we have even to those who are alleged and perceived as criminals. Cele is known to take a hardline, no-nonsense approach to fighting and preventing crime.

“This says enough about their populist approach on crime,” said Hopkins.

We live in a society where there is no sympathy for prisoners. With a high crime rate, people are not keen to feel for someone who might have caused them fear and pain either by a mugging on the street or by breaking and entering.

More than a reform of the bail system and restructuring of the Department of Correctional Services, Hopkins urges all of us to get involved.

“Make a noise and get involved, no matter what your skill is. If you are a graphic designer, use that. An accountant, doctor, get involved – these are not others but they are our brothers and sisters and friends.”

But freedom comes with its own delusions.

Despite having been released on 12 June 2014, Victor feels he still faces a life sentence – the moniker of ex-convict will forever hang around his neck. Finding work has been hard for Victor especially because he has to declare to his prospective employer that he has a criminal record. His son is now a teenager with whom he finds it hard to connect after his many years away in prison.

And Victor’s experience is not unique. DM

This story is part of a three-part series into the experiences of people at the hands of the justice system. In the next piece we tell the story of ex-prisoner Thulani Ndlovu during his time behind bars and what life has held for him after his release.