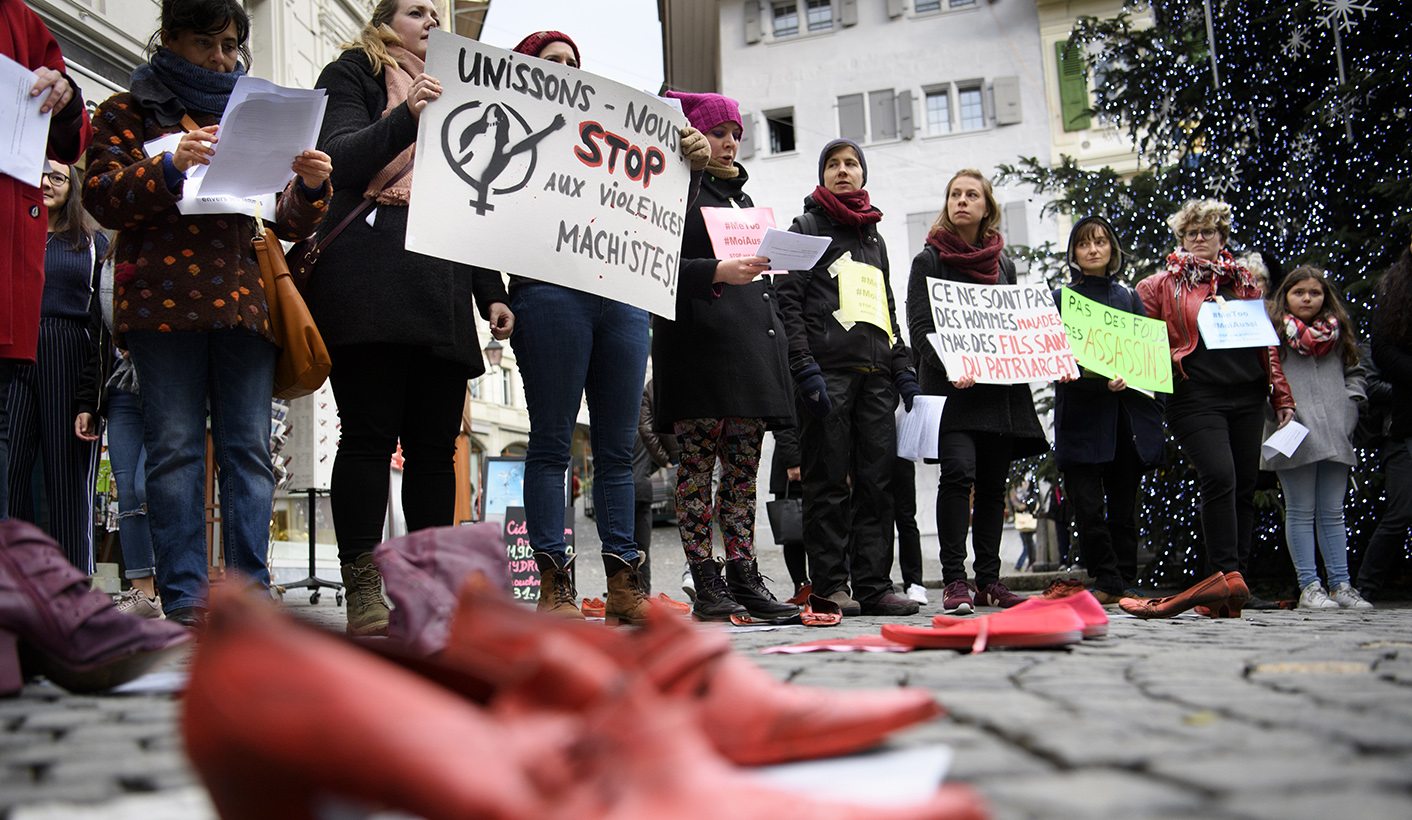 Photo: Women demonstrate during a rally #MeToo against gender-based and sexual violence against women on the International Day for the Elimination of Violence against Women in Lausanne

Social media facilitated the spread of the #MeToo #HerToo awareness campaigns, but certain places do not have the same privilege of access we do. Places where sexual violence has become everyday life and continues with impunity. Places where survivors are rarely seen or heard. By CORMAC SMITH.

The success of the #MeToo campaign in 2017 has undoubtedly empowered many survivors of sexual abuse to talk about their own experiences. Following the Hollywood scandal, millions of #MeToo revelations surged through social media platforms sparking a new-found awareness of unwanted sexual activity while giving power to those who were too afraid or unable to speak out. It’s hard to imagine how the horrific actions of prominent Hollywood “A-listers” could have propelled a social media movement onto the global stage with such ferocity, particularly since a similar movement had begun 10 years previous by a black activist to reach underprivileged communities. The original concept of this movement though was to give a voice to the voiceless in these communities. Social media facilitated the spread of this awareness campaign, but certain places do not have the same privilege of access that we do. Places where sexual violence has become everyday life and continues with impunity. Places where survivors are rarely seen or heard.

We know that sexual violence disproportionately impacts the poorest and most vulnerable so there is cause for concern in recognising that many will continue to suffer in silence. The prevalence of sexual and gender-based violence in Africa has been deeply troubling with significantly higher rates of prevalence compared to western countries. In the Democratic Republic of Congo (DRC), over a period of 36 months (January 2005 – December 2007), Malteser International identified 20,500 female Congolese rape survivors in the South Kivu province alone. The figure at the time of this research was undoubtedly much higher with many women and men unable or unwilling to report with a survey completed by Malteser finding that 73% of South Kivu residents knew someone who was a rape survivor. Research put forward in 2011 suggests that “approximately 1.69 to 1.80-million women reported having been raped in their lifetime (with 407, 397–433,785 women reporting having been raped in the preceding 12 months), and approximately 3.07 to 3.37-million women reported experiencing intimate partner sexual violence”.

This epidemic of sexual violence has grounds in conflict-related outcomes but also ties to increasing levels of gender-based violence as a norm. Gender disparity or inherent gender inequality is an underlying root cause of epidemic sexual violence in the DRC, and arguably around the world, yet the sheer scale is widely unreported. Interviews with survivors and civil society organisations indicate that women and girls do not have the same value as men and boys and with many pointing to cases were rape is deemed as accepted as normative behaviour.

We see similar accepted norms in Central African Republic where rebel commanders not only ignore sexual abuse by their soldiers but advocate it as a weapon of war or indeed have committed the act themselves. Women who go about daily activities and essentials such as farming, buying food, bringing their children to school, have reported some form of sexual violence as well as abduction, physical beatings, and, in some cases, sexual slavery. Cases documented in a Human Rights Watch report show that these crimes “are not only crimes under Central African law, but constitute war crimes”. Similar crimes occur in many conflict or impoverished countries where entrenched gender inequality becomes endemic and seemingly unbreakable.

A large majority of survivors in these countries do not have access to internet let alone a mobile device. Their silence is deafening.

While the #MeToo has spread somewhat to the developing world, there remains a disparity in voices heard. The reason for this is predominantly due to lack of access to internet facilities or essential health services. There is also a clear disparity in gender and internet usage. In the developed world, more women have access to phones yet in the developing world, it is the other way around. The gender gap has narrowed in most regions since 2013 but it has widened in Africa where the proportion of women using the Internet is 25% lower than of men.

According to the 2017 global ICT report completed by the Information Technology Union (ITU), an UN specialised agency for ICTs, internet penetration for women across the African continent is at 18.6%. These figures will be naturally much lower in conflict countries such as the Democratic Republic of Congo (DRC), Central African Republic (CAR) and South Sudan.

In a 2014 report on the DRC, 39% of households had mobile phones, with a large gap between urban (79%) and rural (21%) areas. In 2016, the percentage of people using the internet in DRC was 6.2% with 4% in CAR. Compare this with France where internet usage was at 85.6%. With very limited access to internet, survivors of abuse in these countries cannot see the global movement that is empowering people who chose to talk about their experiences. More needs to be done to support the men, women and children in these conflict countries who suffer sexual abuse.

Civil society group and international aid agencies have people on the ground doing essential work in supporting survivors, but the scale of the issue cannot be tackled by them alone. UN peacekeeping forces, while trying to maintain security for some, have been found to engage in sexual exploitation with the very survivors they are supposed to protect. Some women, and under-age girls, are forced into sex work to help feed their families and even exchange sex for promise of protection.

With recent events in Haiti concerning Oxfam, more and more stories arise where aid agencies workers are found to exploit conflict or disaster zones. While these abuses need to be tackled aggressively, movements like #MeToo need also to shine light on the magnificent work that is done right. If the campaign truly has the financial backing of some of the most power celebrities in the world, surely they can advocate for more support and research on sexual abuse in impoverished/conflict countries. #MeToo and its follow up campaigns of #HerToo and #TimesUp need to define what their purpose is as a global movement and embrace ways where they stand by the sides of all women. DM