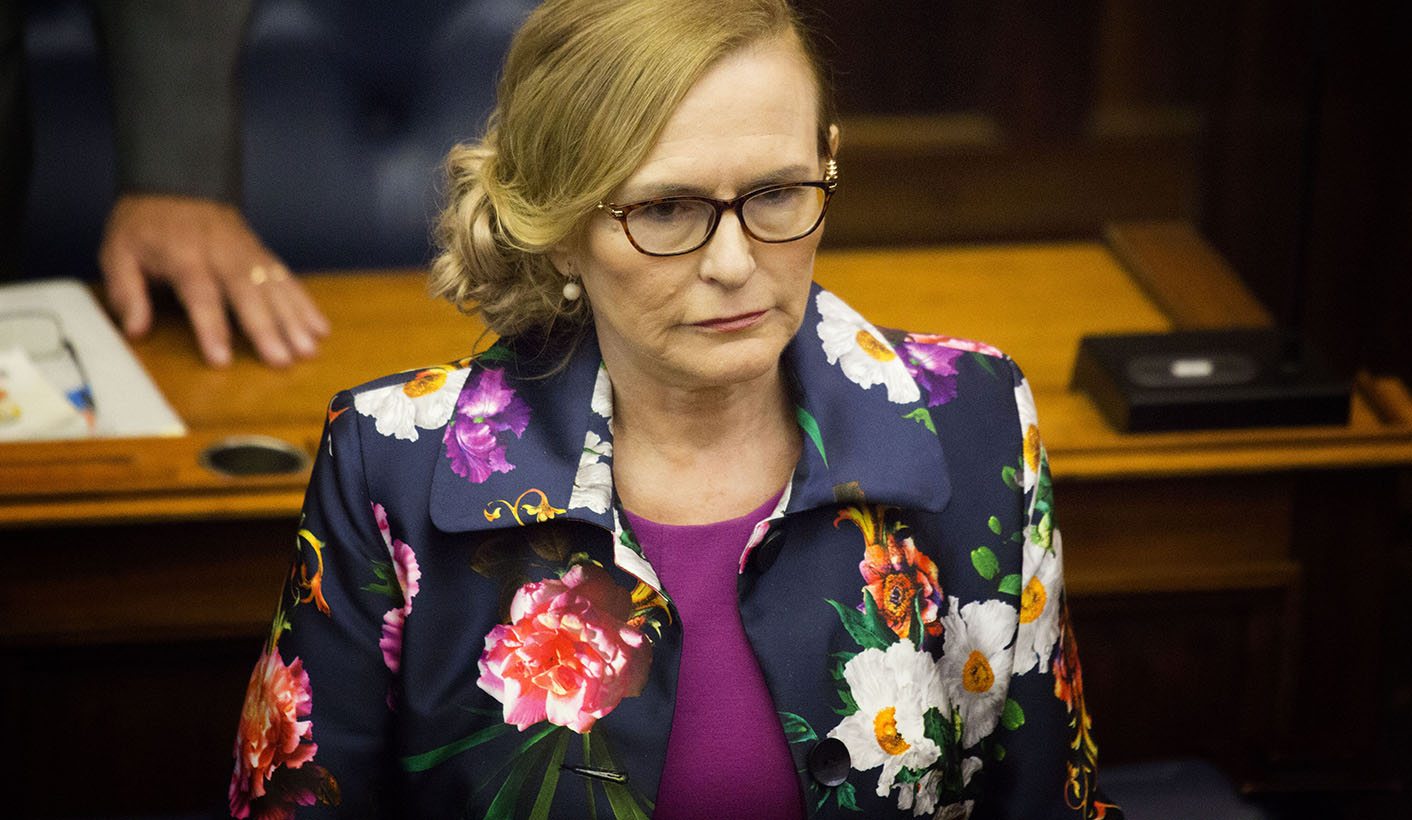 Premier Helen Zille delivered her 11th State of the Province address on Thursday, marking the official opening of the Western Cape provincial parliament. In between loud heckling from members of the house Zille managed to deliver her address in just over two hours, focusing on the water crisis, social housing, health, education and safety. By SUNÉ PAYNE AND LEILA DOUGAN.

Water was the hot topic during Helen Zille’s 11th State of the (Western Cape) Province address on Thursday. The premier lambasted the national government for not providing the necessary funding for water augmentation projects and insisted that local government shouldered the financial burden of water security through water augmentation schemes.

She came under fire from members of the house, some of whom insisted that it was embattled City of Cape Town mayor Patricia de Lille who spearheaded the projects. Regularly, members from the opposition ANC shouted, “Where is Patricia [de Lille]?” and “why is the mayor not here today?”, as a stony-faced Zille tried to continue her focus on the water crisis.

After constant heckling from the opposition, speaker of the provincial parliament Sharna Fernandez had to intervene. She told the hecklers, “Tomorrow there is a three-hour debate for responses. Let’s display dignity and decorum.”

Opposition members were not impressed by the premier after she had explained the roles different governance structures played in the supply of water.

“This is not a normal drought,” Zille said, emphasising that the province’s drought is a rare occurrence and that national government is “responsible for bulk water supply” while cleaning and reticulating is local government’s responsibility.

“You sound like a minister of water affairs… that sounds like a guilty conscience,” shouted an opposition member from the floor.

Zille spoke about the Clanwilliam Dam wall raising – a project which would double the capacity of this dam to 340 million cubic metres, by raising the dam wall by 13.5 metres – lambasting the national department of water affair’s “wasted expenditure of R100-million” associated with the project, which she referred to as a “tragedy”.

“Agriculture and agri-processing have regressed in the area as farmers and factories went out of business due to a lack of water. This would have been averted if the dam-wall raising project had started when it was scheduled to, in September 2013, when the money for it was on the national Budget,” Zille said.

“There is now no money on the Budget for this crucial project,” the premier continued, noting that the project was not mentioned during Finance Minister Malusi Gigaba’s maiden Budget Speech on Wednesday.

The crippling effect that the drought has had on farmers was also emphasised.

“A contribution of R40-million has been received from the National Disaster Management Centre for livestock feed assistance to smallholders. We have committed 100% of these funds, and the money is being paid out in line with proper processes,” Zille said.

As Zille delivered her speech, she was constantly interrupted by heckling from the floor with opposition members demanding to know where the Cape Mayor was. “why is the mayor not here today? We want Patricia,” one member shouted.

Zille ignored the heckling and thanked the Groenland Water Users Association, a group of farmers, who donated 10 billion litres of water to the Steenbras Dam, but warned that residents should not relax their water saving efforts.

Even though Day Zero has moved to 9 July, the premier said predicted dam levels would reach 13.5% by mid winter and, at that point, the City would need to turn off the taps, forcing residents to queue at collection points for water.

The heckling continued as she urged residents and businesses to become “water smart” in order to ensure water security.

In addition to the drought, attention was paid to natural disasters, fires in informal settlements and jobs. Zille referred to the province as having a “resilient economy”.

“Where?” members of the opposition shouted. “Where are those jobs? What about youth unemployment?”

Another development project mentioned was that for the Belhar area, worth R1.8-billion, which is set to be completed in 2022 and aims to include 850 housing units, 560 student units and over 100 units for military veterans.

She also cited the transfer of the Woodstock Hospital property to the City of Cape Town “on condition that it be used for social housing” as well as the Helen Bowden Nurses Home, where she said 302 housing units would be built.

“You sold Tafelberg to the rich. It’s disgusting. Why didn’t you get fired for that?” shouted an opposition member.

The speaker once again had to interject over the heckling projected at Zille.

“A little bit of respect will go a far way, if you could all co-operate. I am addressing the house at large and requesting the co-operation of all honourable members.”

Zille touched on the high crime rate, gangsterism, drug abuse and the lack of police officers in areas including Khayelitsha, Nyanga and Mitchells Plain. She also mentioned matric pass rates, the rollout of wi-fi hotspots and the safety of Emergency Medical Services personnel while on duty.

She spoke of the “collapse” of the rail service before lambasting the national government for the “unreliable services” which 700,000 passengers rely on. “In just two years, over 100 train coaches were lost due to fire – usually arson,” she said.

“White-collar crime also severely impacts the system – one of the most obscene examples being the Gupta network that reportedly benefited from over R5-billion in kickbacks on train contracts,” she said.

As she came to the end of her two-hour address, a visibly irate Zille maintained that her speech would have been much shorter were it not for the heckling. She thanked Western Cape residents for “nine years of building an open, opportunity society for all”.

After the address, Khaya Magaxa, leader of the opposition in the provincial legislature, said the province and the City of Cape Town had “failed to manage [the water crisis]”.

“[There were] warnings a year-and-a-half ago that we would have this problem. We have car washes all over the townships, we’re having pools in all suburbs and this government is doing nothing… up until the crisis started, they started shouting about Day Zero and they didn’t come up with a solution,” he told Daily Maverick.

“The fact that Mmusi (Maimane) ended up being the spokesperson of water in the province is because the provincial leadership was non-existent. Mmusi Maimane came howling, he was worried about the DA’s death in the province,” said Magaxa.

“Helen Zille has nothing to do with the poor. All she wants from the poor is the vote,” said Magaxa.

“I don’t think [Zille] came with concrete solutions. That is a problem. People want solutions, they want more leadership when it comes to the water crisis,” said Christians.

“We are not very impressed with the premier. It is quite clear that the premier herself is lacking confidence. She is not herself,” said Bernard Joseph, provincial chairperson of the Economic Freedom Fighters. DM