Scorpio: Gupta Inc – crushed and on the run 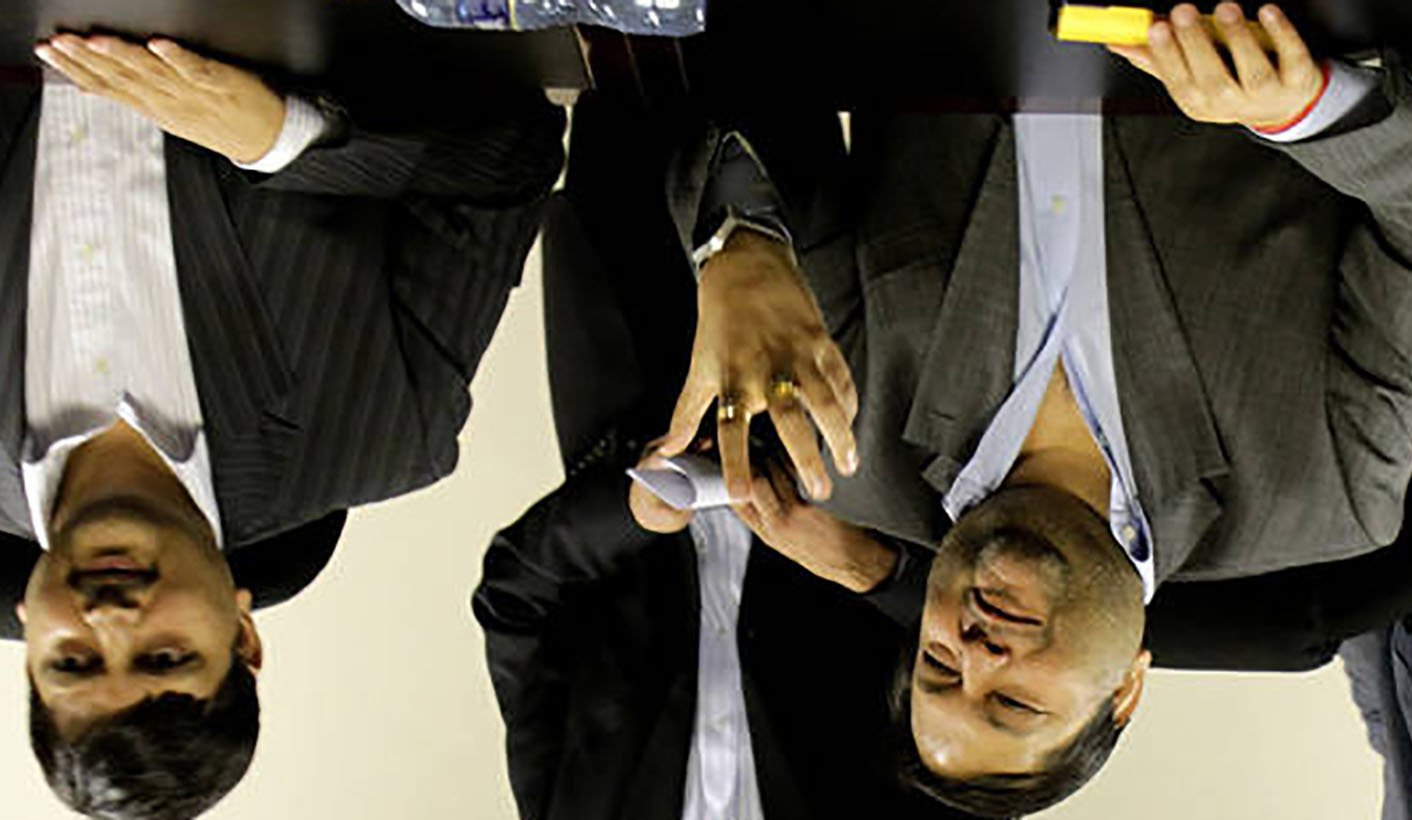 By their own admission, the wage bill across the various Gupta companies stood at more than R160-million in late 2017. With big brother Ajay Gupta now a fugitive from justice in South Africa, the empire isn’t short of cash – it’s just having a mother of a cash-flow problem. By JESSICA BEZUIDENHOUT for SCORPIO.

Hotel bookings in the #GuptaLeaks tell a tale of their own. There was a pecking order: the luxurious beds were reserved for the big kahunas, deluxe rooms for useful minions and twin rooms for the help, those less important but who no doubt served a purpose in the corrupt empire.

The leaked emails show one undeniable fact: Ajay Gupta was king. A “double grand presidential suite” at the Rambagh Palace in Jaipur, India, another at the ITC Maurya in New Delhi and at the Maratha in Mumbai at R11,000 a night and, of course, the odd stay at the Taj Palace Hotel in New Delhi was always in fine style too.

Fast-forward to Valentine’s Day 2018. Hell, it must be rough for Ajay – forced to look over his shoulder, unable to use his cellphone, switching Range Rovers and sleeping in a different bed every night while he has a virtually abandoned cluster of homes in one of Johannesburg’s most exclusive suburbs.

It can only be assumed that this is the current fate of the Gupta patriarch, unless he fled the country ahead of plans to arrest him last week.

Even so, it can’t be easy for the Guptas, who have money woes that are not for the faint-hearted. In September they claimed to have had a combined wage bill of R164-million a month, despite many of their companies ceasing to operate. Commuting first class or via private jet between Johannesburg, Dubai, Delhi, Mumbai or Russia does not come cheap. And exporting coal via the Richards Bay Coal Terminal has proved difficult – it seems the Guptas need money upfront and buyers are jittery. Plus, the sale of their little goldmine, Optimum Coal, has seemingly ground to a halt – that’s an estimated R5-billion stuck in South Africa.

It is symbolic that the Hawks swooped on the Saxonwold compound to effect arrest warrants on the day their main ally, Jacob Zuma, was resisting calls by the ANC to resign as president of the country. It took a while, but that is what you get for messing with a tjatjarag lot of South Africans hell-bent on reclaiming their country from the clutches of a corrupt network. It is said that even some of the former Gupta henchmen and enablers are quietly relishing this moment of reckoning.

“I heard they are talking to some people to help them move cash. People are scared now. Nobody will touch them,” said a one-time insider.

“No, not me. I wouldn’t touch them,” said a former business associate when asked about claims that he may be assisting them on the money front.

Isn’t it ironic that there is a bounty for information leading to their arrests with specific calls on the family’s bodyguards, their close protection officers, to help. Similarly, that the very billions the Guptas once threw around to bend public servants has become largely untouchable, tied up by legal proceedings and the closure of their bank accounts.

After four of the country’s main banks shunned them in 2016, their lone banker, Bank of Baroda, is now preparing to exit SA. But not before it is scheduled to hand over the paperwork for thousands of transactions involving Gupta companies.

The Guptas were given 90 days from January 20 within which to file an appeal against an access to information application for their bank records by the Helen Suzman Foundation and Freedom Under Law. Would they really dare, especially now that the fugitive label hangs about some of their necks?

The Asset Forfeiture Unit already has access to voluminous lists of transactions spanning multiple Gupta-linked companies. It no doubt had to have scrutinised them before heading to court to obtain the initial preservation orders to secure assets it deems to have been the proceeds of crime.

Last week’s court appearance by known top lieutenants, Nazeem Howa and Ronica Ragavan, along with six others, is but the first in what is going to be a growing list of criminal prosecutions.

As if things couldn’t get any worse, Daily Maverick has established that some of their export coal deals are stalling as a result – not surprising, as who in their right mind would cough up cash upfront and risk having their shipment of coal attached as it leaves the Richards Bay Coal Terminal.

In one case, the paper trail for a deal dating back several months shows no sign of being finalised. In this case, they wanted around R100-million paid upfront into a bank account of Centaur Ventures, a Bermuda-based company with deep links to the Guptas. The company’s SA mining arm, Centaur Mining, was named in the Public Protector’s State of Capture report as having paid R885-million towards the Guptas’ purchase of Optimum Coal Mine. An executive of Centaur Ventures is none other than Akash Garg Jahajgarhia, the young man whose nuptials resulted in the Waterkloof aircraft landing scandal – and which the #GuptaLeaks have shown was paid for by money that flowed from the Vrede Dairy project.

Through Tegeta Resources and Exploration, the Guptas are sitting on a mining asset with an estimated value of just under R5-billion if the value of their stake in the Richards Bay Coal Terminal is included. Tegeta owns, among other things, Optimum Coal Mine and Koornfontein, both suppliers of coal to Eskom’s Hendrina, Komati and Majuba power stations.

In August 2017, amid financial pressure triggered by revelations in the #GuptaLeaks, they announced the sale of Tegeta and, with that, Optimum.

The deal drew suspicion that they were merely attempting to externalise the ownership of this asset, thereby protecting their little goldmine.

But six months since announcing the Tegeta sale, Daily Maverick has found that they have yet to move one inch to make it a reality. For starters, a deal of this nature would require various regulatory approvals as well as a green light from Eskom, a key customer.

Eskom has confirmed that it has heard nada from the Guptas since it sent them a letter in October 2017. “Eskom has not received a formal notification of the transaction. A letter was issued in October 2017 to Tegeta requesting clarity on the sale.” There has been no response, Eskom told Daily Maverick.

This is not surprising as Eskom would be entitled to okay the deal and it would be compelled to conduct a due diligence on the buyer – in this case, a Swiss-based outfit called Charles King SA, ostensibly a special purpose vehicle for the deal.

Run by Amin Jaffar Al Zarooni, an old Gupta business connection as illustrated in the #GuptaLeaks, the company was in the fashion business until it decided to venture into coal mining under new management in 2017.

Despite the Guptas’ previous cushy ties with the Department of Mineral Resources, they also haven’t bothered to initiate a Section 11 application, a key requirement for the sale of Tegeta as it regulates the transfer of mining rights in SA.

Similarly, the Competition Commission has also been waiting for three months for a response to its enquiries about the sale.

“The transaction was never notified. We actually wrote to Oakbay in November last year asking them for information and have received no response since,” the commission’s spokesman Sipho Ngwema said in response to questions.

He cautioned that parties to such deals may not implement until it has been approved by the commission and the Competition Tribunal.

If the Guptas followed the letter of the law on this transaction then, technically, no cash should have changed hands for the sale of Tegeta as yet.

Meanwhile, as the Hawks remain mum about whether the family’s business partner, Duduzane Zuma, or brother, Atul Gupta, are also classified as fugitives, they have alluded to two people of Indian origin that are being sought in connection with the Vrede Dairy case. Since Atul was named in an earlier application by the Asset Forfeiture Unit of the National Prosecuting Authority as having been the alleged recipient of R10-million of the stolen loot, it would make sense that he may be one of the suspects.

If Atul finds himself saddled with the label of fugitive in the coming days, he will have a hard time fighting the Asset Forfeiture Unit’s preservation order.

The walls have caved in and there’s a new sheriff in town, one that was able to present the State of the Nation Address uninterrupted on Friday night, and certainly one who didn’t need to stick to a Gupta script.

What remains to be seen is whether the Guptas will come home to face the music or whether they would rather abandon the Lamborghini Gallardo, the Bentley, Maserati and Porsche that the #GuptaLeaks show were allocated to Saxonwold during their heyday. DM