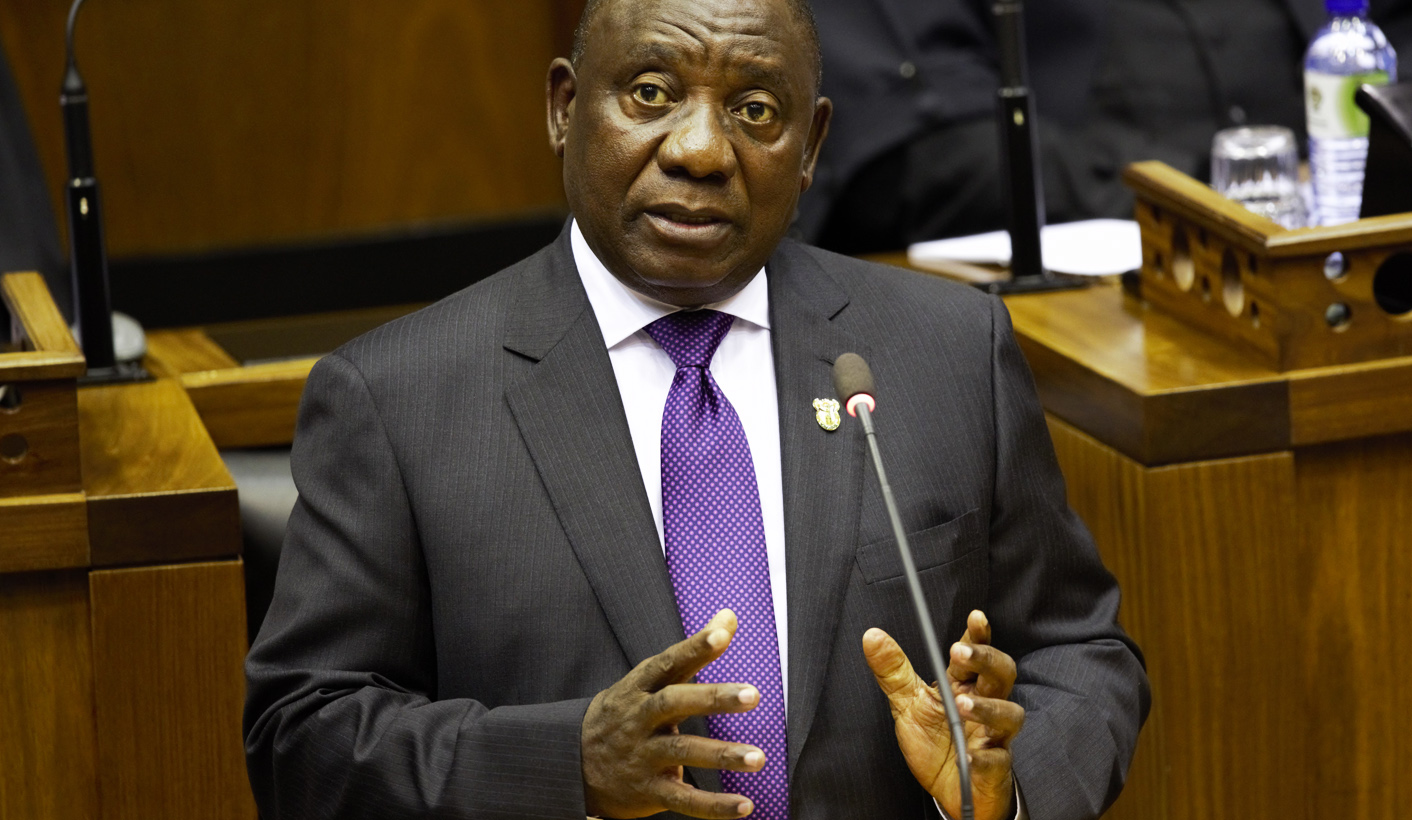 Newly elected President Cyril Ramaphosa delivered his maiden State of the Nation Address (SONA) with an appeal to South Africa to leave behind “the era of diminishing trust in public institutions and weakened confidence in leaders” and “all the negativity that has dogged our country”. But there were some concrete announcements regarding governance clean-up, and “turning the tide on corruption in our public institutions”. New dawn. Renewal. It’s a thing now. By MARIANNE MERTEN.

President Cyril Ramaphosa stuck to the script in his maiden State of the Nation Address, describing the political turmoil over Jacob Zuma’s exit from the Union Buildings that grasped South Africa for the past 11 days as “the transition”. There was a “thank you” to South Africans for their patience so that “we could properly and carefully manage issues of transition”.

And he moved on to acknowledge former presidents Thabo Mbeki and FW de Klerk – who for the first time in years both sat in the public gallery – and received enthusiastic applause. Not so smooth was the thanks to former president Jacob Zuma. Heckles erupted from the opposition benches. But if Ramaphosa has shown anything in the past two days since his election as president on Thursday, it’s that he’s quick on his feet:

“Yes, I do wish to thank former president Jacob Zuma for the manner in which he approached this very difficult and sensitive process. I also wish to thank him,” he said, adding that they had spoken the previous day and he had received Zuma’s good wishes for this SONA.

Invoking Nelson Mandela’s vision of building a democratic South Africa and a better life for all, Ramaphosa hit the notes of unity in diversity. But there was also a frank acknowledgement of the tough economic times: poverty levels have risen since 2015, and economic growth has weakened, with jobs being shed as investment downgrades loom.

SONA traditionally sets out government’s priority for the year. And in 2018 it hinged on everyone needing to seize “the moment of hope and renewal” in a social compact to transform people’s lives.

Against the backdrop of South Africa’s struggling economy, damaged in many ways by State Capture, it was not surprising that aside from the emphasis of renewal and optimism for the country, most of Ramaphosa’s speech focused on the economy:

“Tough decisions have to be made to close our fiscal gap, stabilise our debt and restore our State-owned Enterprises (SoEs) to health. At the centre of our national agenda in 2018 is the creation of jobs, especially for the youth.”

So, there will be a national jobs summit to come up with “practical solutions and initiatives that will be implemented immediately”.

There will be an investment conference within three months to find ways “to market compelling investment opportunities” in South Africa. There will be a focus on local manufacturing and production.

And there will be a focus on agriculture’s potential to grow the economy and create jobs. This included restitution, with a call to financial institutions to support such efforts:

“We are determined that expropriation without compensation should be implemented in a way that increases agricultural production, improves food security and ensure that the land is returned to those from whom it was taken under colonialism and apartheid.”

Industrialisation would be underpinned by transformation. Preferential procurement and the black industrialist programme remained central. Support would be offered to black professionals amid an undertaking to “deal decisively with companies that resist transformation”:

“Radical economic transformation requires that we fundamentally improve the position of black women and communities in the economy, ensuring that they are owners, managers, producers and in the end some of them will become financiers as well,” said Ramaphosa.

Youth would be a fundamental focus, with the employment tax incentive, dubbed the youth subsidy, extended to all companies countrywide. To underscore this, Ramaphosa announced that he would establish a youth working group, representative of the youth, in government – and a youth crime prevention strategy.

“Our most grave and most pressing challenge is youth unemployment. It is therefore a matter of great urgency that we draw young people in far greater numbers in productive economic activity,” said Ramaphosa. “Young South Africans will be moved to the centre of our economic agenda.”

The national minimum wage, which Ramaphosa as deputy president steered through various consultations, was described as an example of ensuring a better life in practice.

Infrastructure investment remained a key government priority and, against the improving commodities prices, also mining – “We need to see mining as a sunrise industry…” – and small business. “Government will honour its undertaking to set aside at least 30% of public procurement to SMMEs, co-operatives and township and rural enterprises.”

There will be an economic advisory working group, and a “digital industrial revolution commission”.

Ramaphosa did not shy away from political and governance pickles in education and social grants, and stated that the State Capture commission of inquiry would start its work soon.

S0Es could no longer borrow their way out of financial difficulties, he said, adding:

“We will change the way that boards are appointed so that only people with expertise, experience and integrity serve in these vital positions.”

He re-iterated the free education undertaking made by Zuma on the first day of the December 2017 national conference – from this year, for students from households earning less than R350,000 a year. And amid confusion and delays, Ramaphosa emphasised that the Constitutional Court directives for a new grant payment contract by South African Social Security Agency (Sassa) would be complied with:

“I want to personally allay fears of any disruption to the efficient delivery of this critical service, and will take action to ensure no person in government is undermining implementation deadlines set by the court.”

South Africa’s development, economic growth and transformation depended on a strong and capable state. And Ramaphosa hinted at changes in how government is structured:

“It is critical that the structure and size of the state is optimally suited to meet the needs of the people and ensure the most efficient allocation of public resources. We will therefore initiate a process to review the configuration, number and size of national government departments,” he said.

While this announcement came in the wake of opposition parties’ calls to cut the size of Cabinet, Ramaphosa was more clear-cut when it came to the controversy-ridden South African Revenue Service (SARS), which has under-collected R50.8-billion. There will “shortly” be a commission of inquiry into administration and governance at the tax collector to “ensure we restore the credibility of the service and strengthen its capacity to meet its revenue target”.

And so, amid talk of renewal and hope, in a clear signal of a pending clean-up on the governance front, Ramaphosa delivered a few whammies such as tighter SoE governance, a SARS inquiry and clearly state support for the State Capture commission of inquiry.

“Our country has entered a period of change,” Ramaphosa said. DM