Jacob Zuma digs in his heels: ‘I’m being victimised here’ 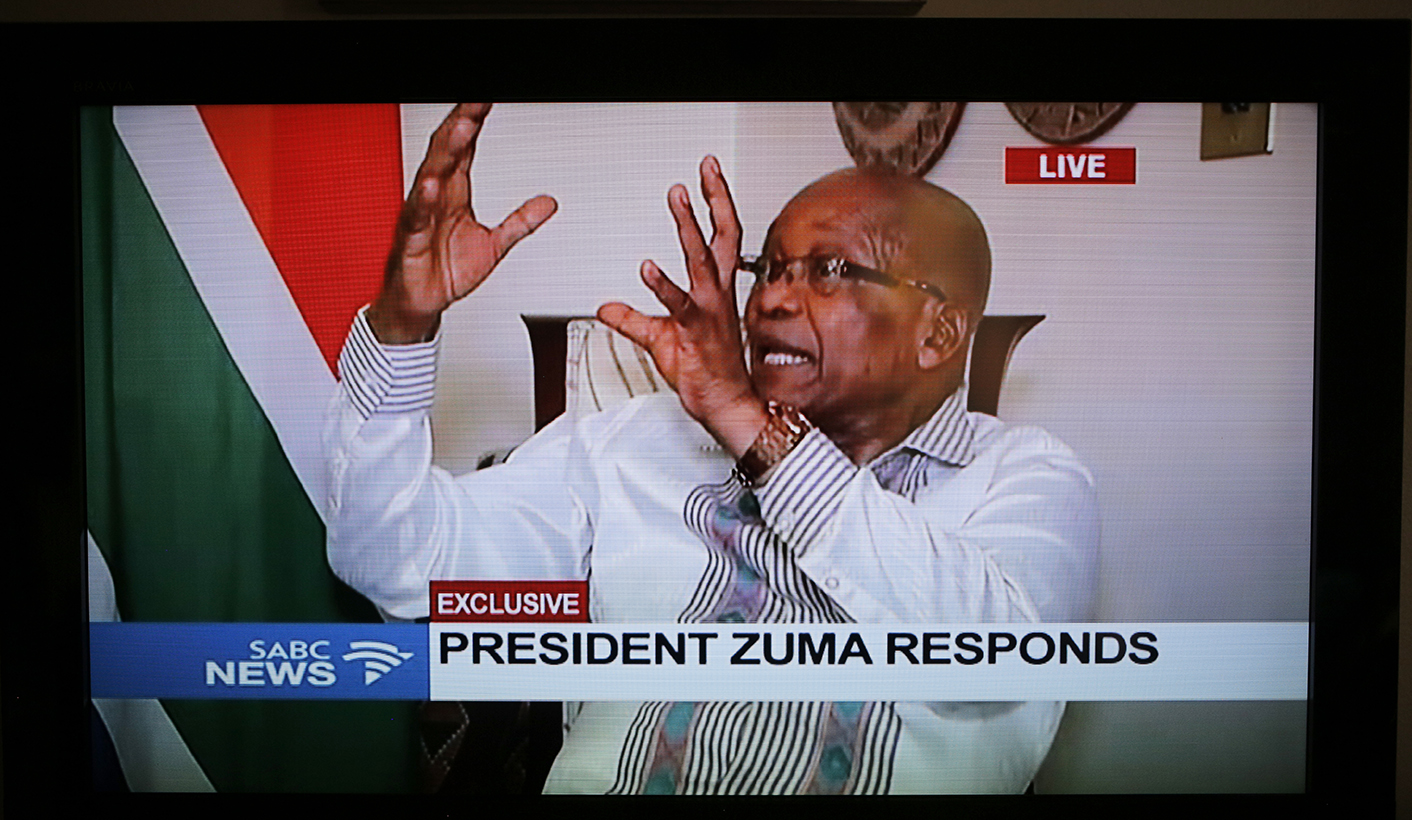 President Jacob Zuma will not resign. If the ANC had hoped to force his hand by announcing that the party will support a motion of no confidence against Zuma in Parliament tomorrow, the party underestimated the intransigence of Number One. In a sometimes bizarre, rambling interview with the SABC on Wednesday afternoon, Zuma repeated his new rallying cry: “What have I done wrong?”. By REBECCA DAVIS.

One is that President Jacob Zuma, who has never been afraid of invoking the spectre of political conspiracy against him, believes that he is a victim; a martyr; a man at the unjust mercy of strange political currents which he claims not to understand.

Another is that President Zuma is livid with his deputy, Cyril Ramaphosa.

Zuma’s decision to suddenly arrange a live TV interview with the SABC came after the Presidency cancelled a planned media appearance at the Union Buildings on Wednesday morning. Even the SABC was seemingly kept in the dark about the live broadcast until shortly before it commenced just after 14:00.

Over the course of 50 minutes addressing SABC reporter Mzwandile Mbeje at the presidential guesthouse, Zuma repeatedly painted himself as baffled by the ANC’s desire for him to step down as state president before his term expires in 2019.

“I need to be furnished on what I’ve done,” Zuma said. “Unfortunately no one has been able to provide what it is that I’ve done.”

This was a recurring refrain throughout, as Zuma expressed confusion as to why it was considered necessary for him to evacuate his seat right now.

“What is this hurry?” he asked. “What are you rushing for?”

Zuma said that this action was unprecedented in the history of the ANC. In the case of the recall of former President Thabo Mbeki in 2008, Zuma said: “The NEC felt there were specific things President Mbeki was doing” [that justified his recall]. Even then, Zuma now claims that he personally opposed the recall of Mbeki because it would “set a bad precedent”.

By contrast, Zuma says, nobody in the leadership of the ANC has now presented him with the reasons justifying his recall.

It became clear early in the broadcast that Zuma had no intention of using it as a platform to resign. Instead, he explained that he felt it “important” to take the public into his confidence about the events of the past few weeks.

The narrative made available to the public, Zuma said, has been: “Zuma is defying [the ANC]”.

“I have not defied. I disagree with the [ANC’s] decision… This has been done in a manner which I felt I’m being victimised here.”

Zuma gave a blow-by-blow account of how the Zexit negotiations have progressed from his perspective. In this account, he portrayed himself as accommodating to a fault when dealing with Ramaphosa and the other Top Six ANC leaders.

By contrast, he painted Ramaphosa and his colleagues as being capricious and fickle in their dealings with him: agreeing one thing to his face, and returning later with a different version of events.

Several times, Zuma described himself as being “sharp” with Ramaphosa.

“Perhaps I made a mistake by being more robust,” he mused. But this was the only hypothetical error he acknowledged.

Zuma said that when Ramaphosa became ANC president in December 2017, the two men set down together and had a “cordial” discussion about how to share responsibilities, with an eye on the 2019 elections. Suddenly, less than two months later, Zuma was being asked to vacate his seat.

The president said he responded to the calls for his resignation with a counterproposal.

“I should agree to resign, but we should work out a time frame that will accommodate a number of things,” Zuma said.

He proposed resigning after June 2018: giving him an opportunity to “introduce” Ramaphosa to BRICS and to African Union leaders in order “to remove the perception out there that Zuma is being elbowed out”.

Some of these heads of state, Zuma added, “are my colleagues and friends”. He implied that it would reflect negatively on South Africa and Ramaphosa if these global leaders believed that Zuma was being summarily ejected from leadership.

Zuma claims that Ramaphosa was happy with the idea that he stick around until after June, but that, after talking to the NEC, he changed his tune. It was then that Ramaphosa and ANC Secretary-General Ace Magashule paid a late-night call to Zuma to ask: “Can I change and perhaps say something that could be more acceptable?”

Zuma refused, again citing his confusion about why he was being pushed out. He says he told Ramaphosa and Magashule: “If you want to recall [me], then you recall.”

Asked directly by the SABC’s Mbeje if he would resign, Zuma breezed over the question.

“I’m told that now, tomorrow, in Parliament, there’s going to be a vote of no confidence,” he said a little later. Zuma seemed to indicate that he would comply with the outcome of such a vote.

“If Parliament doesn’t want me… there is no problem. I would be out,” he said.

But that doesn’t mean the chess master might not have a few cards up his sleeve yet. At a number of points Zuma raised the possibility of his exit causing fractures and even violence within ANC supporters, citing a clip of protesters tussling over his removal outside Luthuli House as touching him “very seriously”.

Zuma also reminded his audience of what had happened after former president Thabo Mbeki’s recall: the breakaway of parts of the ANC, culminating in the formation of opposition party the Congress of the People.

If he is dismissed, Zuma said, the party may be “plunged in a crisis that I’m sure my comrade leaders will regret”.

He warned: “Some people may not like this, may feel that there is something wrong.”

The SABC interview was not the last that South Africa will be hearing from Jacob Zuma ahead of Thursday’s vote of no confidence in Parliament.

“I am going to make a statement today,” Zuma said. DM