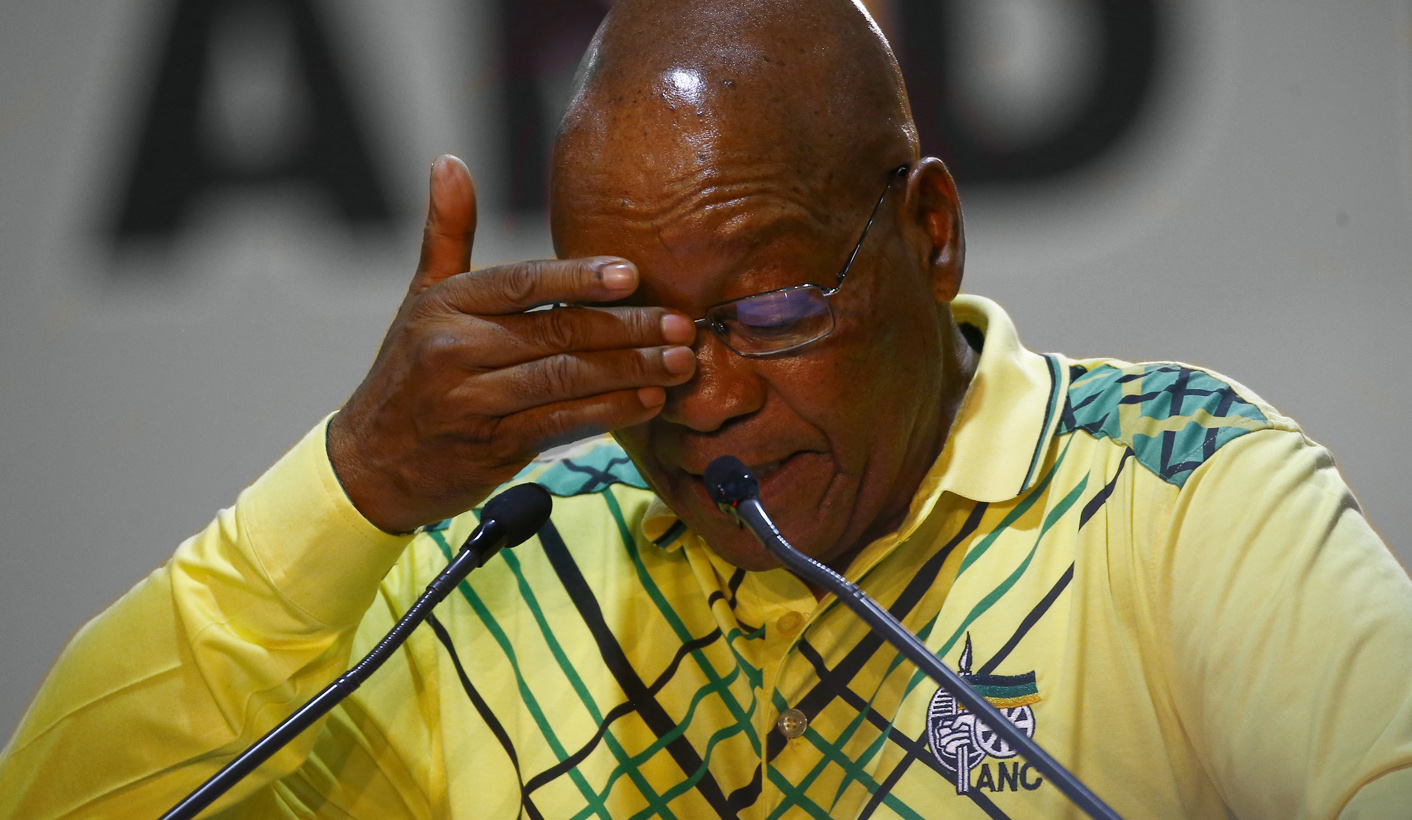 By early on Tuesday morning, as ANC president Cyril Ramaphosa’s promises of some kind of closure to the “transition” issue started to look old, rumours again did the rounds that President Jacob Zuma had agreed to demands from the national executive committee to resign. Sources from the inside said he would be given 48 hours to do so, or face a recall. By CARIEN DU PLESSIS.

The ANC national executive committee (NEC) meeting scheduled for Monday at short notice was supposed to have been a short one. It only had the “transition” issue – the resignation/firing/maybe nothing of President Jacob Zuma – on the agenda. Instead, it took the better part of a day and night, with the media camped out in front of the St George’s Hotel outside Pretoria where the meeting was taking place.

Around an hour later, Ramaphosa’s motorcade returned to the Saint George hotel in Irene, eNCA reported. The NEC remained locked in talks until 03:00 on Tuesday morning, when finally the luxury cars of NEC members were seen leaving the premises. The meeting had begun 13 hours earlier.

As eNCA’s Thulasizwe Simelane observed, “you wonder what transpired” while the nation slept.

Simelane, who had been camped out by the gates all along, had said earlier that the cars of the other 80 or so NEC members did not seem to follow.

Even though Zuma’s office in the Union Buildings had already been packed up a month earlier, according to two sources, and although his planning diary had no more entries, by mid-afternoon on Monday press releases were still being pushed out in Zuma’s name as if nothing strange was happening.

The Department of International Relations and Co-operation sent out a statement in which Zuma sent his condolences to Russia and its president Vladimir Putin following a plane crash there on Sunday, in which all the passengers and crew members died.

Around the same time, opposition parties had a press conference in Parliament calling for its dissolution. An hour or two later, National Assembly Speaker Baleka Mbete apparently indicated that she could consider a request by the Economic Freedom Fighters to move the vote of no confidence scheduled for February 22 to Tuesday. This could be another way of applying pressure on the old man to go.

Business Day reported on Monday night that some sources said Zuma had asked for a three-month “notice” period to resign unconditionally, so that he could “introduce” Ramaphosa to international bodies such as the African Union – and also, those sceptical of his motives said, he could conclude deals favourable to those close to him.

The NEC meeting on Zuma was reminiscent of former president Thabo Mbeki recall, in a way. On that day in September 2008, journalists were stuck in the clubhouse in Esselen Park, waiting for an announcement which should have come more quickly than it did. Thankfully, there were no live broadcasts and not too much Twitter activity at the time to fuel anxiety and speculation, and by early evening then Secretary-General Gwede Mantashe called a press conference in time for the evening bulletins and newspaper deadlines, in which he said nothing, and then sent journalists packing.

The decision came after midnight, after Mbeki’s supporters were worn down into conceding, with NEC members sworn to secrecy until after the press conference scheduled for the next morning (which was a Saturday). Still, word got out – via SMS and others – and it was reported before that.

The process of recalling Zuma has felt much longer than that, perhaps because Ramaphosa has been giving assurances of closure for close to a week, and because it’s known that the party’s Top Six had already asked Zuma to go two Sundays ago.

There was also no official communication from the party on Monday.

Last Wednesday’s NEC meeting was cancelled to give Zuma more time, and because Ramaphosa had detected a “change of tone”, and also because apparently there was an agreement between them that Zuma would step down. After days of negotiations, however, and a list of reported demands by Zuma related to his security and court cases, the meeting was back on by Monday. The NEC was expected to make a formal request for Zuma to step down, although he was said not to have been present (he is now an ex officio member and could attend if he wanted to or was requested to).

Cellphones are usually confiscated before an NEC meeting and sealed in brown envelopes on a table at the entrance where security keeps watch over them (and over journalists trying to sneak pics of these envelopes), so inevitably any leaks that escaped from Monday’s meeting would have been slightly old or via sources who had been fed pieces of gossip from someone who left the meeting early.

Most of the 86 NEC members would probably have wanted to see Zuma go, except for die-hard supporters like ANC Youth League secretary-general Njabulo Nzuza, who said a viable solution would be to give Ramaphosa more responsibilities, similar to what happened to Mbeki when he was preparing to take over from former president Nelson Mandela.

Ramaphosa on Sunday did promise that the NEC meeting would bring closure, but nobody really expected this closure to be postponed by another 48 hours. Zuma is clearly playing for time, and for South Africans the waiting game continues. DM

Update at 8.35am, Tuesday 13 February: The ANC NEC meeting finally ended at 2.50am.  The ANC has called a press briefing at Luthuli House later today.