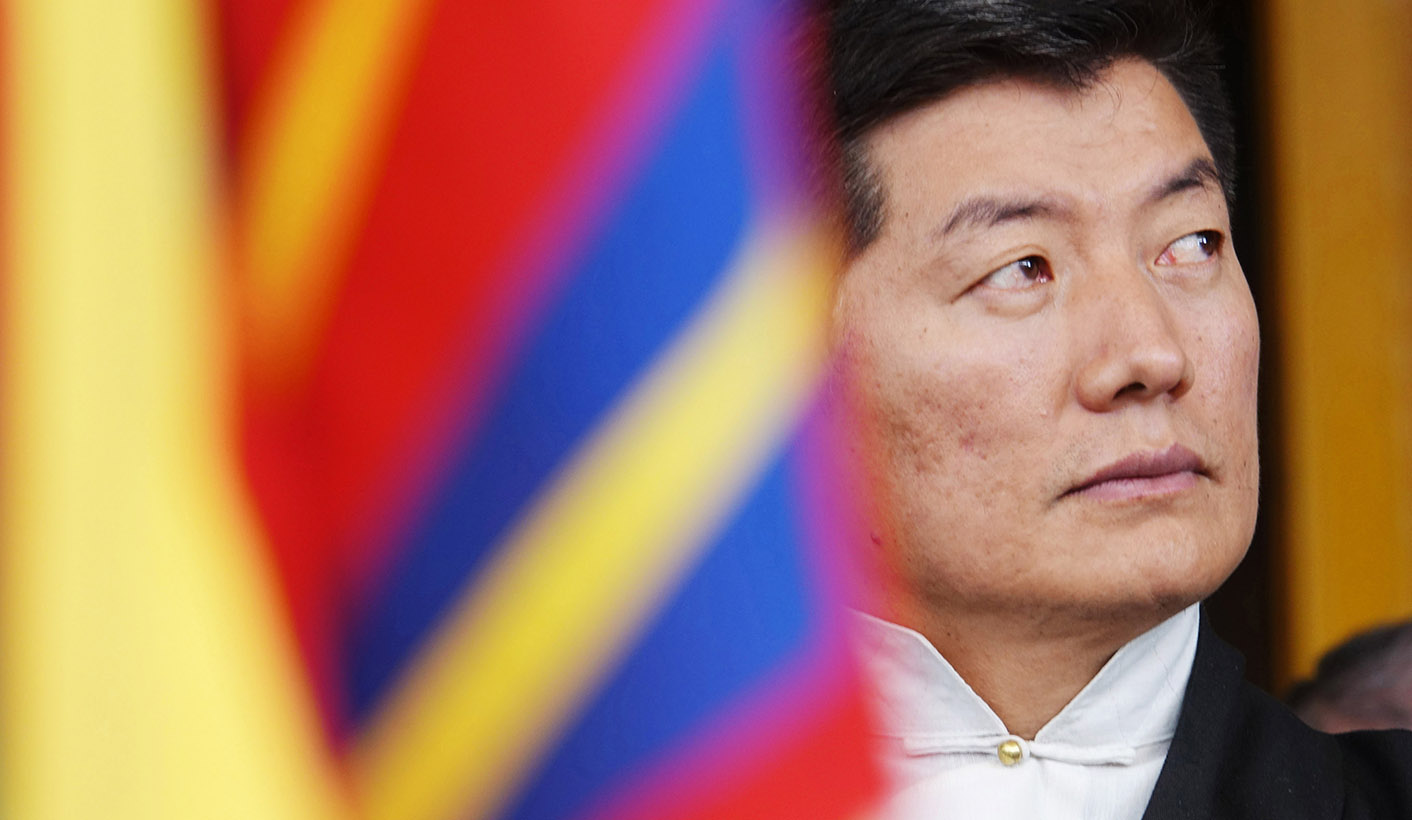 On Monday 5 February, Lobsang Sangay, the president of the Tibetan government-in-exile, arrived in South Africa for a four-day visit. The Department of Home Affairs couldn’t stop him because, unlike the Dalai Lama, he doesn’t travel on refugee papers. KEVIN BLOOM spoke to the “sikyong” about realpolitik, the influence of Beijing, and the environmental catastrophe that will be visited upon the planet if China doesn’t cease its exploitation of the Tibetan plateau.

I. Pieces of silver

“The occupation of Tibet started with a road.”

Sentences like these, because they indicate that you are in the presence of a storyteller, are an invitation to shut down the chattering mind; to simply and unreservedly listen. Even more so when the speaker of the sentence is somebody like Lobsang Sangay, the “sikyong” (president) of the Tibetan government-in-exile. And especially so when the speaker has the power to shame your own government – when his sentences, like the one above, are used to set the scene for the contextual parallels between Communist China’s behaviour on the Tibetan plateau in the last century and its behaviour in Africa today.

“The Chinese army were so polite, so nice,” said the sikyong, in reference to the first visitors to travel up that road in 1950. “Children used to push them and slap them and pinch them, and they just kept smiling. The Tibetan workers who helped build the road were paid in silver coins. Later we found that the Chinese government deliberately built silver coin factories, near Chengdu, for this purpose. The question, when the Chinese troops came up the road, was to surrender or to fight. There was not much consensus among the ruling elite. A few of them were already siding with the Chinese government, saying, ‘Communism is good’.”

And it was here, according to the sikyong, that the mould for China’s modern expansionist drive had originally been fashioned and cast – because, by the time the 1959 uprising failed, forcing the Dalai Lama into exile in India, it had been discovered that these supporters of Chairman Mao had taken payment in silver coins too.

“So you can clearly see the template,” said the sikyong, “not just in Africa, but in many places – Europe and Australia included. I’ve been saying this for a number of years.”

Which was no empty boast: the public record bore it out. Problem was, the South African government had been doing their utmost to ensure that such things weren’t said on local soil. In the last nine years, the Dalai Lama – who had transferred his political power to the sikyong in 2011 – had been denied a visa by the Department of Home Affairs three times. In 2009, the spiritual leader of the Tibetan people (an incarnation of Avalokite?vara, Bodhisattva of Compassion), was refused entry to the country for a peace conference. In 2011, he was barred from coming for his old friend Desmond Tutu’s 80th birthday. In 2014, the good people in Pretoria stopped him from attending the 14th World Summit of Nobel Peace Laureates.

But at each visa refusal, even though it was obvious to the world’s press, and even though China had publicly thanked South Africa for its “correct position” on the matter, our government played dumb. In December 2015, one month after the Forum on China-Africa Co-operation, where President Xi Jinping had pledged $60-billion to Africa for infrastructure projects and had promised to “work closely” with President Jacob Zuma in the creation of 10 special economic zones, the head of the African Affairs Department in the Beijing Foreign Ministry flat-out confirmed what everyone knew to be true. “We invest a lot of money in South Africa,” he told a delegation of African journalists, “and we can’t allow [the Dalai Lama] to come and spoil the good relations.”

Our government’s response to this bracing dose of reality? They denied that China, or any outside power, held sway over their foreign policy. “On two previous occasions when [the Dalai Lama applied for a visa], the applications were withdrawn by his own officials,” said Clayson Monyela, spokesman for the Department of International Relations and Co-operation. “In fact, he is welcome to apply for a visa and that application would go through the Department of Home Affairs. It is just unfortunate that on previous occasions we were never given the opportunity to make that determination.”

Unfortunate too, perhaps, that Sikyong Lobsang Sangay, who travels on a United States passport, can’t be so easily denied – with the Dalai Lama, who intentionally travels on refugee papers, Home Affairs can be as intransigent as they like.

“I’m here, in some ways, to remind the South African government of the principles and values on which their Constitution and country was founded,” the sikyong informed Daily Maverick, a few hours after breezing through customs at OR Tambo. “Because of friends around the world, because of support from the international community, South Africa has gained its democracy. So it’s natural for me to come and say, hey, we need your support now as well.”

By all the measurements of modern realpolitik, the sikyong is on a fool’s errand. He may be the first Tibetan to obtain a doctorate in juridical science from Harvard Law School, he may be an expert in international human rights law, democratic constitutionalism, and conflict resolution – his birth-name may even mean “kind-hearted lion” – but he is still up against the essence, the very apotheosis, of historical and contemporary power. The upside? You don’t have to explain any of this to him.

“There was a big story in the media five years ago,” the sikyong said, from across the dining table at the Lamrim Tibetan Buddhist Centre in Auckland Park, Johannesburg. “It was about whether the foreign minister of Australia, Bob Carr, would meet with me. So when I visited parliament, I took the elevator up, the door opened, and there he was, Bob Carr. We just said, ‘hi, hi’. Obviously, he didn’t want to shake my hand. It could compromise his position from a perception point of view.”

Four years later, the sikyong went on, Carr had become a China expert, the director of the Australia China Relations Institute at the University of Technology Sydney. The Australian people, he said, were suddenly suffering from “buyer’s remorse” – Chinese influence in the country had by this point spread from trade into politics and academia, and had prompted the launch of a major local inquiry.

The much bigger story, however, the story that for the sikyong would one day affect not just Australia or South Africa but ultimately the entire world, was the story of China’s exploitation of Tibet’s resources. It was no coincidence, said the sikyong, that the Mandarin appellation for Tibet – Xizang – meant “Western Treasure”. This proved, he claimed, that China had “always been aware” of the wealth in the Tibetan highlands. “Why do you think Chinese phones are so cheap?” he asked. “It’s because of the lithium on the Tibetan plateau.”

As the sikyong had written in a widely shared Guardian piece in August 2017, it wasn’t just lithium – it was oil and gas and (more disturbingly) water. At an average elevation of 4,000 metres and a surface area of 2.5 million square kilometres, the Tibetan plateau holds the largest store of glacial ice after the Earth’s two poles: hence its other other moniker, “the third pole”. All 10 of the major river systems in Asia originate on the plateau, the sikyong reminded Daily Maverick, and so constitute a lifeline for nearly 2 billion people.

“China has 19% of the world’s population but only 12% of its fresh water,” he said. “Already, 400 million are facing a scarcity. The situation in India, Pakistan and Bangladesh is worse. All of these are dependent on the water tower of Tibet. You can clearly see where it is leading.”

Hydro-damming, explained the sikyong, was diverting more and more of the precious resource into China. But the damming policy, together with unchecked mineral extraction and the effects of climate change, would ultimately melt the glaciers and destroy Tibet’s ecosystems, which would result in catastrophe for the citizens of China too.

As the sikyong put it in his Guardian piece: “Tibet symbolises the three crises that confront Asia today: a natural resources crisis, an environmental and a climate crisis. These three are interlinked and potentially pose a threat to the ecological well-being and climate security not just of Asia but even of Europe, North America and Australia.”

Africa, of course, would not be spared – the Chinese road, when all was said and done, went everywhere. And so what about hope? What did the sokyang have to say about this resource?

“We believe in the law of karma,” he smiled. “All you can do is keep trying. It’s not nihilism, it gives a sense of optimism, because whatever begins, ends.” DM

Photo: Lobsang Sangay, Prime Minister of the Tibetan government-in-exile, addresses a gathering during an event held to observe Tibetan National Uprising day in the suburb of McLeod Ganj, the seat of the Central Tibetan Administration in exile, near Dharamsala, India, 10 March 2017. Photo: EPA/SANJAY BAID