Analysis: The Downfall of The Talented Mr Molefe 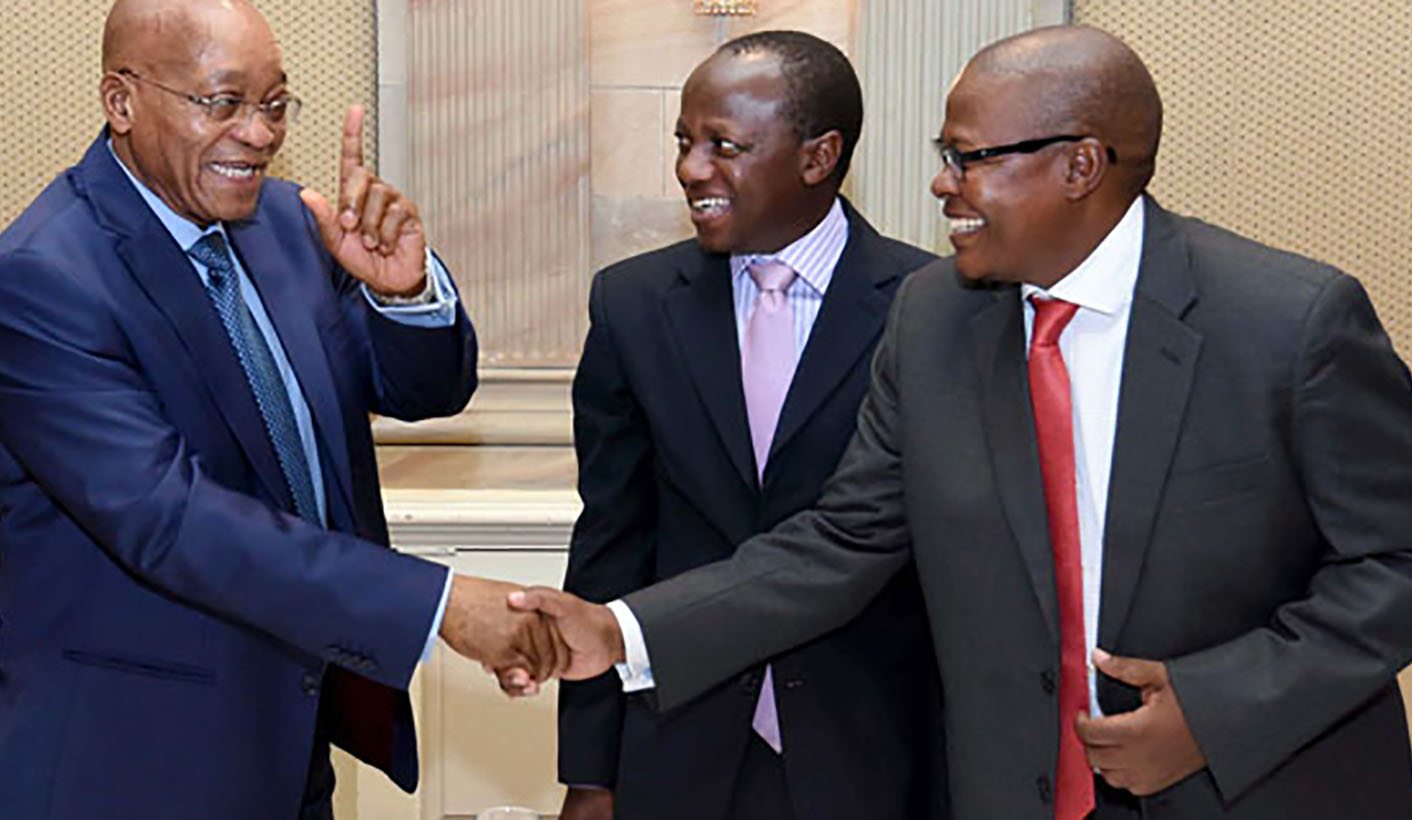 Thursday’s damning court ruling against former Eskom CEO Brian Molefe is justifiably seen by many as his well-deserved comeuppance. But it is also evident that myths about Brian Molefe are rapidly becoming fact. That he was always either corrupt or incompetent (not true). That he was always one of Zuma’s minions (instead, Molefe was a passionate Mbeki acolyte). The reality is that what makes Molefe’s fall from grace more startling is that he was supposed to be one of the good guys: a man of both competence and energy entrusted with the turnaround of one state-owned entity after another. What happened? By REBECCA DAVIS.

When Brian Molefe was announced as the acting head of Eskom in April 2015, one commentator tweeted: “Brian Molefe [has] so far been the most astute, successful head of a state enterprise in SA. Hope Eskom won’t be his Waterloo”.

Eskom has indeed been Molefe’s Waterloo. But the tweet also points to something forgotten by South Africans with short memories: that Molefe’s appointment as Eskom CEO was widely greeted with optimism. And for good reason: Molefe had a reputation as a real turnaround guy; a man of sharp intellect, clear vision and formidable work ethic. He was hailed as one of the best and brightest that post-apartheid South Africa had to offer.

Daily Maverick has spoken to two former colleagues of Molefe, neither of whom wanted to be named, who attested to his skills and vigour.

One, who had frequent contact with Molefe when he was a rising star at National Treasury, described him as having “an incredible eye for detail” and a “really collaborative leadership style”.

Another, who encountered Molefe during his stint at the Public Investment Corporation, said: “[Molefe] was absolutely unapologetic about what had to be done in terms of transformation. Absolutely unapologetic. And that was quite inspiring to many of us.” One of Molefe’s actions while at the PIC were to demand the appointment of black directors to the boards of companies in which the PIC invested.

When Molefe was awarded an honorary doctorate of engineering by a Scottish university in 2014, the citation read:

“The University Senate seeks to recognise your outstanding leadership of Transnet SOC Ltd in your role as Group Chief Executive, and your commitment to social justice and the provision of opportunities to all through higher education.”

The honorary doctorate was one of many accolades that rolled Molefe’s way.

Molefe also warranted a glowing profile in Penguin’s 2012 publication Meet the CEOs – Essential Leadership Style in Today’s Business World, where he was praised for “his willingness to stand firm in the face of political and commercial pressures”.

These descriptions today seem almost bewilderingly hard to square with the Molefe who has dominated headlines since 2016 due to unremitting scandal.

Daily Maverick’s Scorpio team has revealed how Molefe “started planning the feathering of his retirement nest” – unlawfully – only two months after he was employed by Eskom in September 2015.

The #GuptaLeaks emails have also fleshed out the picture originally painted by Public Protector Thuli Madonsela in her State of Capture report: how Molefe helped the Gupta family to capture Eskom. (amaBhungane and Scorpio)

In Molefe’s now infamous weeping press conference on 3 November 2016, the paradoxes of the man were on full display. On the one hand we saw the supposedly upright public servant who announced he was stepping down from Eskom “in the interests of good corporate governance” following Madonsela’s allegations – a seemingly positive move given the tendency of public officials to dig their heels in, but which now has to be read in the light of the massive payout he schemed with the Eskom board to win.

On the other hand we saw a man who seemed to produce cartoon-like lies to defend his position – claiming that his frequent phone calls and visits to the Guptas were the result of his fondness for an imaginary neighbourhood shebeen.

Molefe had by then become an ever-more vocal supporter of the Guptas, and was also increasingly seen as one of President Zuma’s key allies. When Molefe was sworn in to Parliament as an MP in February 2017, speculation was rife that his near future held an appointment as Finance Minister.

ANC deputy secretary general Jessie Duarte has since confirmed that Zuma wanted Molefe as Pravin Gordhan’s replacement as Finance Minister and was met with strong opposition by the rest of the ANC’s then Top Six.

This strengthens the perception that Molefe was by this time willing to do Zuma’s dirty work. But it certainly was not always the case.

In 2010, the Pretoria News referred to Molefe and his wife in an article describing “the fairy tale story of the husband-and-wife team who played important roles in driving the vision of former president Thabo Mbeki”.

So much of an Mbeki-ite was Molefe, in fact, that the same article describes him as “cut[ting] a forlorn figure at the ANC’s elective conference in Polokwane in 2007 after [Molefe’s] political hero lost his position to Jacob Zuma”.

Of course, Molefe was not the only government figure to perform a rapid switch of allegiances after Polokwane. But the detail adds further complexity to the Molefe story – how an apparently principled and driven Mbeki disciple could proceed to throw his lot in so thoroughly with the crooks of the Zupta era.

One of the contributing factors to Molefe’s fall may have been a regrettably common political failing: that he started to believe his own hype.

When Molefe joined Eskom, the power provider was still struggling through its load shedding crisis. In November 2017, former Eskom board member Venete Klein submitted a written statement to Parliament’s Eskom inquiry saying how impressive Molefe’s turnaround was initially perceived to be.

“The entire board, including me, was in awe of what Mr Molefe had been able to deliver, especially as he had done so with substantially the same executive team who had previously not known how to turn the load shedding situation around,“ Klein wrote.

But Business Day’s Carol Paton suggested in 2016 that Molefe’s achievements were “much exaggerated by himself and his colleagues”. Molefe’s seeming ability to end load shedding at Eskom, wrote Paton, was largely the result of a “surprise fall in demand for electricity from industry, mining, agriculture and transport”.

In retrospect, too, some of the lauding of Molefe back in the day may have been the result of a public and media desperate for a success story in the murky waters of South Africa’s state-owned entities. Journalist Francis Herd has since written in Daily Maverick of her experience in challenging Molefe in a 2014 TV interview about a potentially questionable Transnet contract.

“What I encountered was a man who was not only willing to lie blatantly on a public platform, but who still had the gall to try to bully me and my bosses for challenging him,” Herd wrote.

But Molefe’s downward trajectory may also have a depressingly simple explanation: in the form of the old story of a man succumbing to the temptations of power and money.

By 2016 the “fairy tale story of the husband-and-wife team who played important roles in driving the vision of former president Thabo Mbeki” was long over. Molefe was divorced from his wife Portia – who went into business with former Mbeki era minister Alec Erwin – and married to a much younger woman in a ceremony attended by fashionistas and celebrities. By January 2017 he had purchased a Pretoria mansion worth R17-million, complete with cigar lounge and gym.

Perhaps Molefe felt that a life of fabulous wealth was by then his due. Perhaps his staunch support for the Guptas was a twisted perversion of his once-principled support for transformation; Molefe sought to paint the Indian family as unfairly targeted in a space where white businessmen were allowed to operate with carte blanche.

Thursday’s court judgment has proven that the old Brian Molefe – if such a person ever existed – is long gone, and is probably never coming back. DM

Politics is just not the same without Julius Malema, Floyd Shivambu and Mbuyiseni Ndlozi, PhD